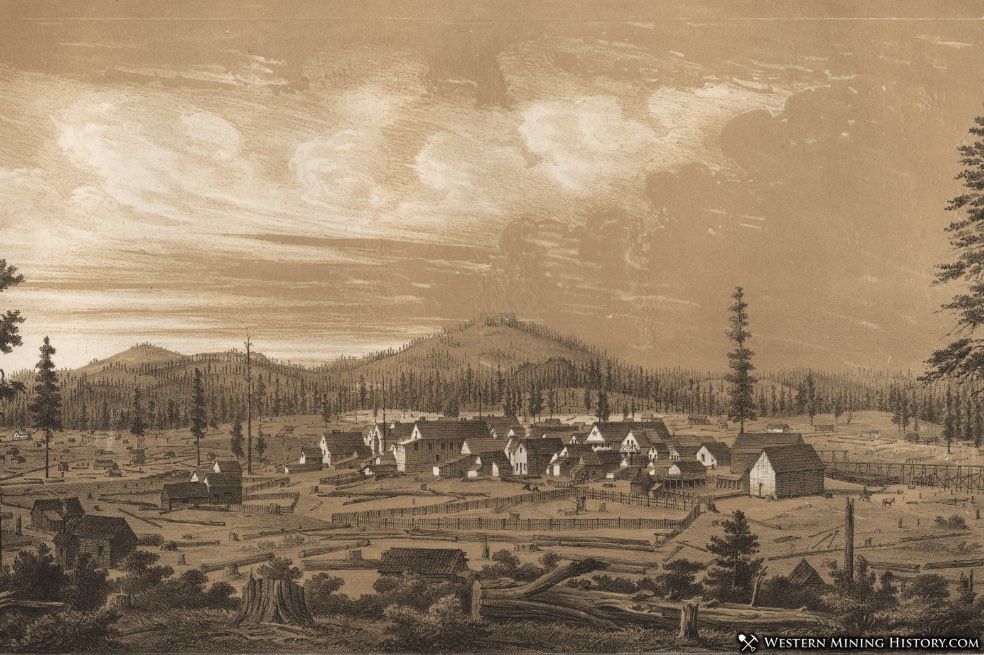 St. Louis was one of the earliest mining towns settled in Plumas County. This gold placer settlement first appears on maps in 1853, but could have been active at an earlier date.

In 1855 Henry Cohn emigrated from Germany and joined family in St. Louis who were operating a merchandise business. In 1914 just prior to his death, Cohn described some of his experiences in California in the printed pamphlet titled Recollections of My Youth. The following text are excerpts from that work.

St. Louis as Described by an Early Resident

Saint Louis was a very lively gold-mining village, consisting of from twenty to twenty-five wooden houses among which were three good merchandise stores a cigar store, a bank, Wells Fargo & Co., a fine French restaurant and hotel, a butcher, a baker, an American and a German doctor, a livery stable, etc.

The place was really populated only on Saturdays and Sundays when the miners showed up to sell their gold and buy the things they needed for the following week. Numerous gamblers and card players appeared simultaneously with them. The gold miners sold their gold to the bank or to the storekeepers, the price paid for the gold varied according to its quality and origin and averaged about $18.00 per ounce. The crude gold was then melted and purified.

By Sunday night, little of the money which the miners had received for their gold remained in their hands; most of it was carried away by the gamblers. In this manner life proceeded from early spring until late fall, at least as long as the mining continued to be so productive. The mining activity practically ceased at the end of every October and did not begin again until March, since the deep snow, often reaching the roofs of the houses, made working impossible.

For a short period after my arrival I peddled my merchandise, visiting the towns of La Porte, Pine Grove, Downieville, etc. Although my "loyal" mule was of valuable assistance on my travels in this mountainous region, this kind of occupation was very cumbersome. Moreover, very few women, who were my best customers, lived in this gold-mining region.

The business of my relatives, Mendelsohn & Co., consisted of a main store in Saint Louis and a branch in Poker Flat, about four miles from Saint Louis. It was a prosperous undertaking, and I found plenty of work for myself. All our buying was done either in Marysville or directly in San Francisco. For the transportation of our goods from Marysville into the mountains we employed our own pack-train of forty mules, otherwise one had to pay from $50.00 to $60.00 per hundred pounds from San Francisco to Poker Flat

The store in Saint Louis as well as that in Poker Flat continued to prosper. Also the pack-train was a steady source of income. In 1858 we built an annex in which we opened a plumbing shop to satisfy the demand for sheet metal and pipes for the miners.

During the summer of the same year a conflagration consumed the entire town of Saint Louis with the exception of the bank and of our store. Upon the outbreak of the fire, several miners who had deposited gold in our iron safe came running to us, demanding the return of their deposits. I refused resolutely, telling them to stay instead and to help extinguish the fire. Realizing that I would not open the safe during this critical situation, they turned to give assistance to the fire fighters.

Fire insurance was of course out of the question because the risk was too great. I personally was so upset after the fire that I suffered from constant nightmares, shouting "Fire!" in my sleep. I felt life too unsafe unless we had a fire-proof building. Hence we decided to begin immediately its construction. The building progressed rapidly, as we found stones in the neighborhood which seemed as if hewn for ready use. Iron doors were brought up from Marysville and in a few months we were able to move into the new, fire-proof building.

In 1859 I participated in the construction of a long ditch, together with two Germans, Charles Hendel and Christian Berg. This flume was to catch the water from the near-by gold diggings. It was constructed of wooden boards, twelve to fourteen inches wide and equally high, while cross boards were nailed to the bottom at intervals of six feet. The channel was then laid out with stones and quicksilver was strewn near the cross boards. Every other Saturday and Sunday when the washing in the mines above ceased, the stones were removed and the quicksilver and the gold were carefully taken out. However, as we were not experts in mining, the result was rather unsatisfactory.

In the spring of 1861, I noticed a general slowing up of business as a result of reduced yields in the mines. I availed myself of this opportunity to take a trip to Europe to visit my parents. By this time the railroad across the Isthmus of Panama was of course completed and I had a fast and pleasant trip, via Panama and New York, to Hamburg. On the return trip, I arrived in New York on May 20, 1862. After five days of sightseeing I continued in the usual way and was back in San Francisco on June 15.

Upon my arrival in Saint Louis I discovered that our business as well as the whole situation had suffered greatly during my absence. Many miners had left their claims since the outbreak of the Civil War and the production of gold had decreased. In addition to all this, a disastrous fire broke out again in the spring of 1863, consuming the entire town with the exception of the two fire-proof houses.

While I was in Europe, our pack-train had suffered serious losses as a result of a flood. It might be of interest to learn how such a train was composed. A fairly decent train consisted ordinarily of twenty-five to forty pack-and riding animals. Ours was usually comprised of thirty-five mules of which six were riding animals, while the rest carried freight. Besides, every train had a white mare with a bell around her neck to lead the train.

The crew consisted of the proprietor, the cargador (supervisor and manager), four arrieros (packers and drivers), and a cook. Mexicans seemed to be best fitted for this occupation. The cook on his white mare, the yegua, rode ahead, followed by an animal carrying cooking utensils so that he could begin preparing the meals as soon as a stop was made. The cargador's business included the distribution of the freight among the individual animals, the supervision of his crew, and the maintenance of the harnesses.

According to their ability to carry, the mules were packed at the starting point for a four day trip with 300 to 425 pounds each, including 50 pounds of fodder. The distance covered in a day averaged about sixteen to eighteen miles. During the winter period, when snow lay too deep, the train was taken to the lowlands in Yuba County for grazing. Once every summer a rest period of from four to six weeks was inserted during which the animals grazed at a mountain meadow and the equipment was overhauled.

Carrying on the transportation by mules in winter was a difficult and strenuous undertaking. We often had to start at two o'clock at night when the snow crust was still hard and had to halt at eight o'clock when the sun came out. At one time, in the fall, a very severe snow storm took us by surprise, and despite our most arduous efforts we were forced to stop and unload the animals and to stay there throughout the night. Worn out by the hard work, I fell asleep. When I woke up at two o'clock in the morning, I was covered by a blanket of several inches of snow.

After a wagon road had been laid out to Saint Louis, our pack-train became unnecessary and we sold the animals at an average price of $120.00. The departure of my two loyal Mexicans, the packer and Pedro, and the cargador, Juan, was a moving episode.

On the whole, it looked pretty desolate in the mountains, and I made up my mind to leave the country for good. I sold my business share to a German, Jake Smal, but did not insist upon payment in gold. Thus I received greenbacks which at that time had a value of 65% and which I, moreover, later sold in New York at 43%.

During the middle of August 1863, I left Saint Louis and the Sierra Nevada after a sentimental farewell scene, escorted by ten friends as far as the "American House." They had borrowed every available horse in Saint Louis, otherwise more friends would have come to bid me farewell. After a touching "Good bye, boys," I went by stage to Marysville where I stayed a few days, and from there by steamer to San Francisco. On September 4 I sailed by the steamer Sacramento to Panama and continued to New York where I arrived on the 26th.

The journey along the Atlantic seacoast was very dangerous at that time. Several Confederate ships, including the notorious Alabama, impeded navigation, for which reason we had to proceed completely blacked out for several nights. From New York I continued to Liverpool, arriving there in twelve days. I visited London and Paris and returned to Germany in October 1863.

So much is now being written about America that I cannot think of adding anything of general interest except that during the eleven years I lived in that country I never met a single uniformed policeman or soldier, except in New York on my trip home during the Civil War.