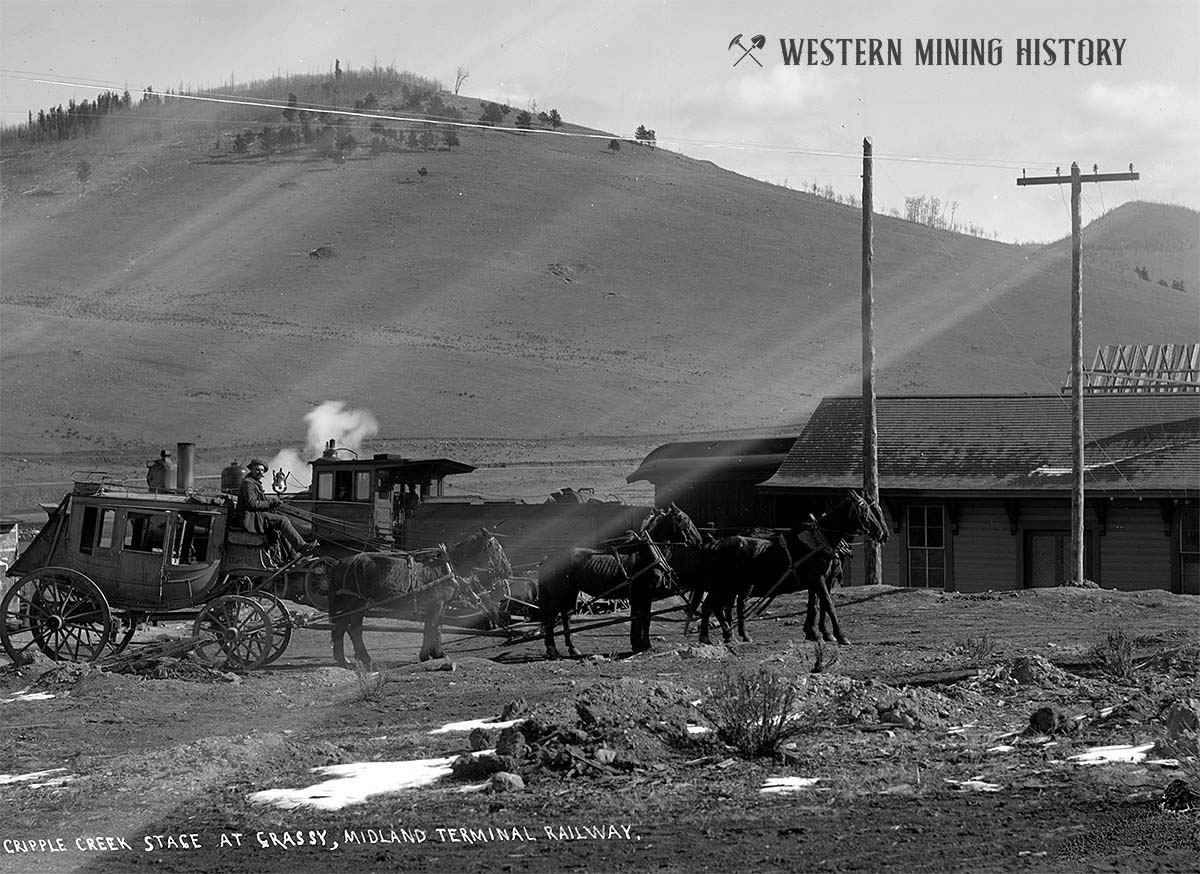 Prior to the Cripple Creek gold rush, the Cameron town site was the location of a small ranching community that was known as Grassy. There is some confusion about this name though as one map, and a few newspaper articles from the time called the community "Gassy". A well-known book on Colorado ghost towns suggests that the original settlement was named after a local rancher with a "gastronomical condition".

Given that the town is located on Grassy Creek, I would speculate that the more likely story is that the name "Grassy" was simply misspelled on a couple occasions, and because the misspelling ended up on a map, it became a "matter of record". However, we will probably never know the true story of this Gassy, Grassy town name. 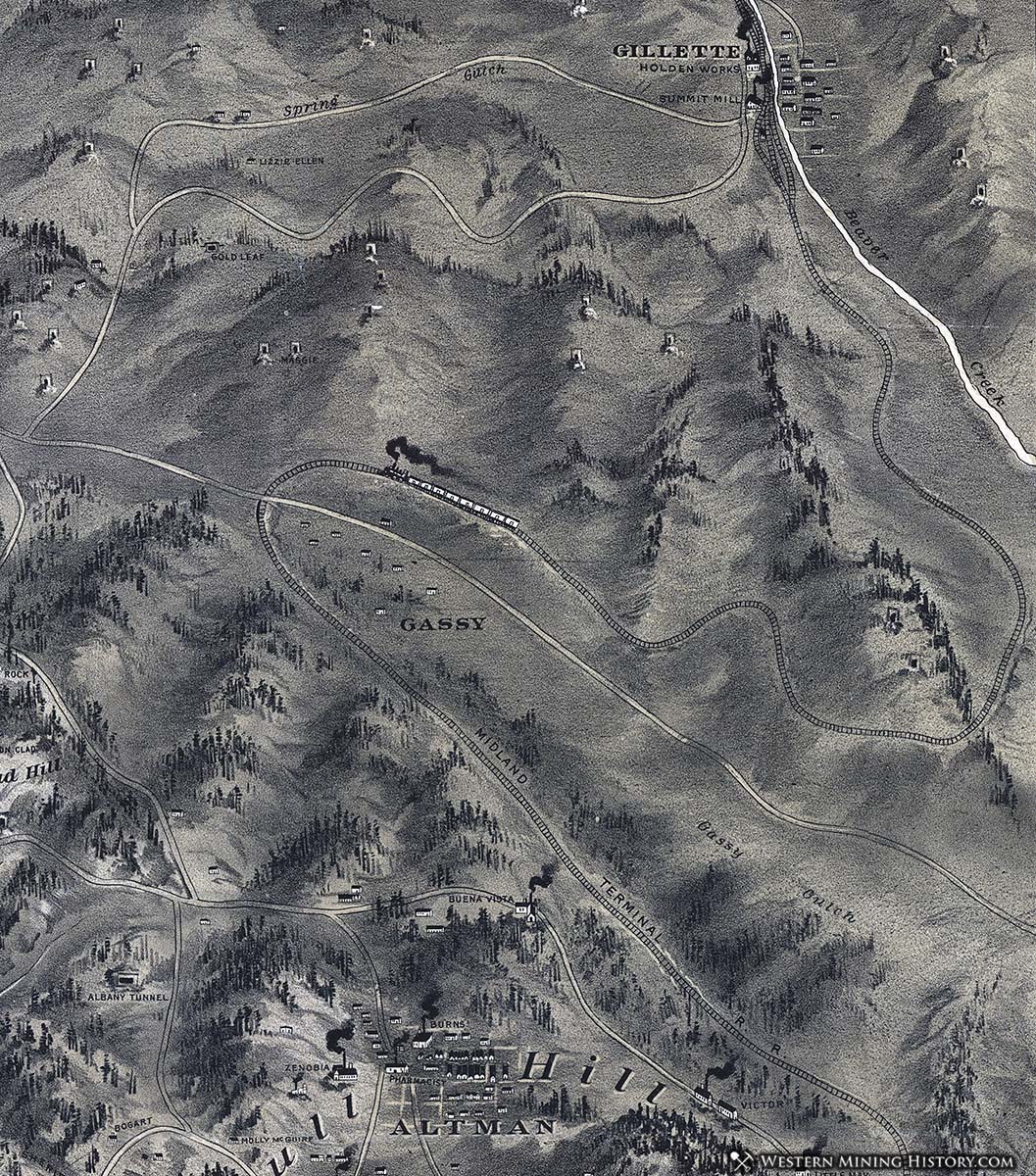 Gassy on an 1895 illustrated map

In 1892 a railroad depot was established here, and over the next few years the mining activity of the district moved closer to the town until it was surrounded by claims, and a few mines were operating nearby. In 1899 a development company purchased the townsite and laid out the town of Cameron. A post office was established in 1901. 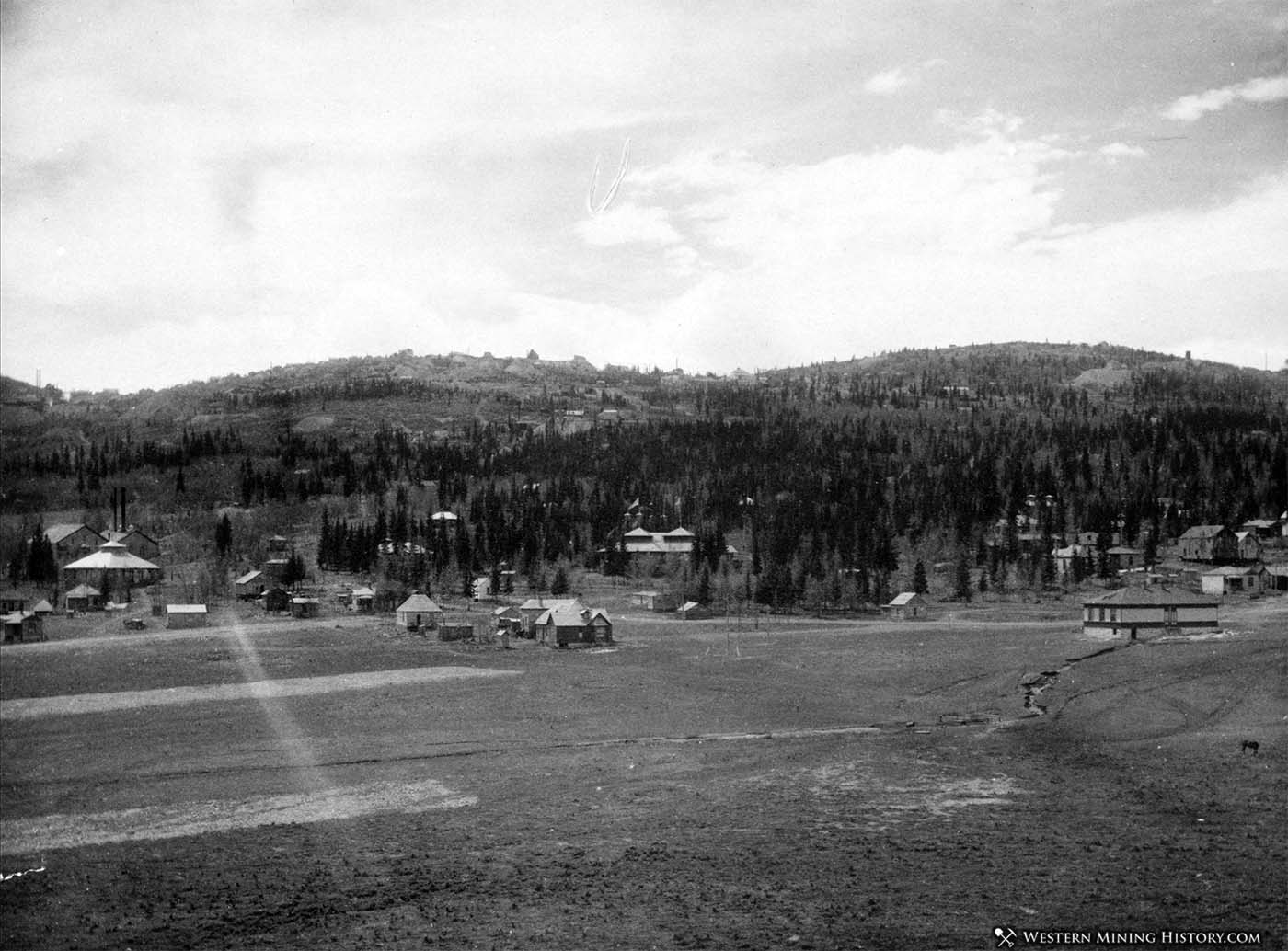 Cameron's most notable feature was Pinnacle Park. Located south of town, this 30 acre park became the most popular recreation spot in the entire district. The annual Labor Day picnic here drew many thousands of district residents each year, with some years reporting up to 10,000 in attendance. The September 7th edition of the Lafayette News reported on the event: 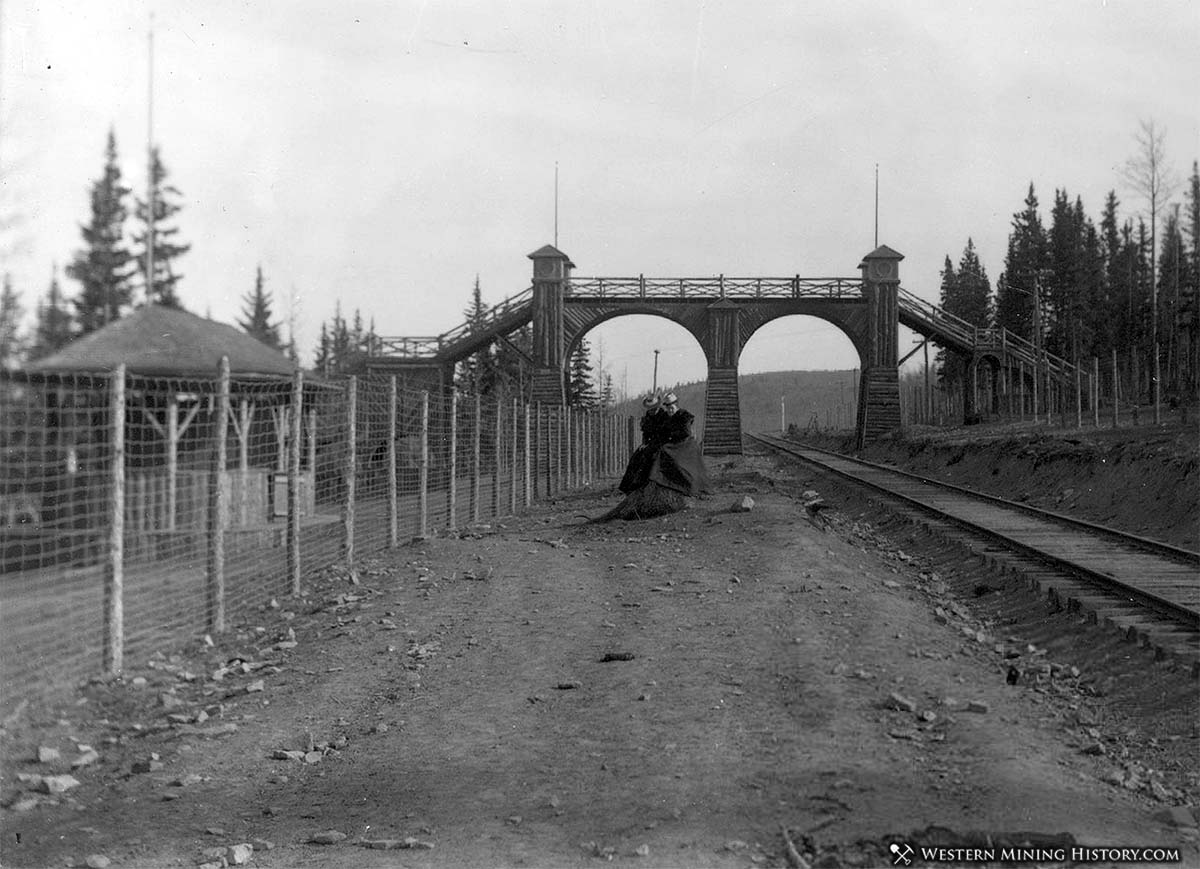 Cripple Creek. Colo., September 3. Labor Day was observed for the Cripple Creek district in this city. The parade which moved down Bennett Avenue at 10:30 o’clock, was the largest ever seen in the camp. It was forty-five minutes in passing a given point and by actual count contained 2,200 union workers. The day was wholly enjoyable, the weather ideal, and not an incident occurred to mar the celebration of the day set apart for the laboring man to revel in his strength.

As usual, these exercises were concluded in Pinnacle park at Cameron, and between 8,000 and 10,000 participated in them. The capacity of the rolling stock of the railroad was the only limit placed on the crowd, and to transfer the large number of people everything available, from palace to flat cars, was brought into requisition.

The mines near Cameron were not the districts leading producers, and soon faded. As the first decade of 1900 wore on, the town declined. In 1909 the post office was closed. 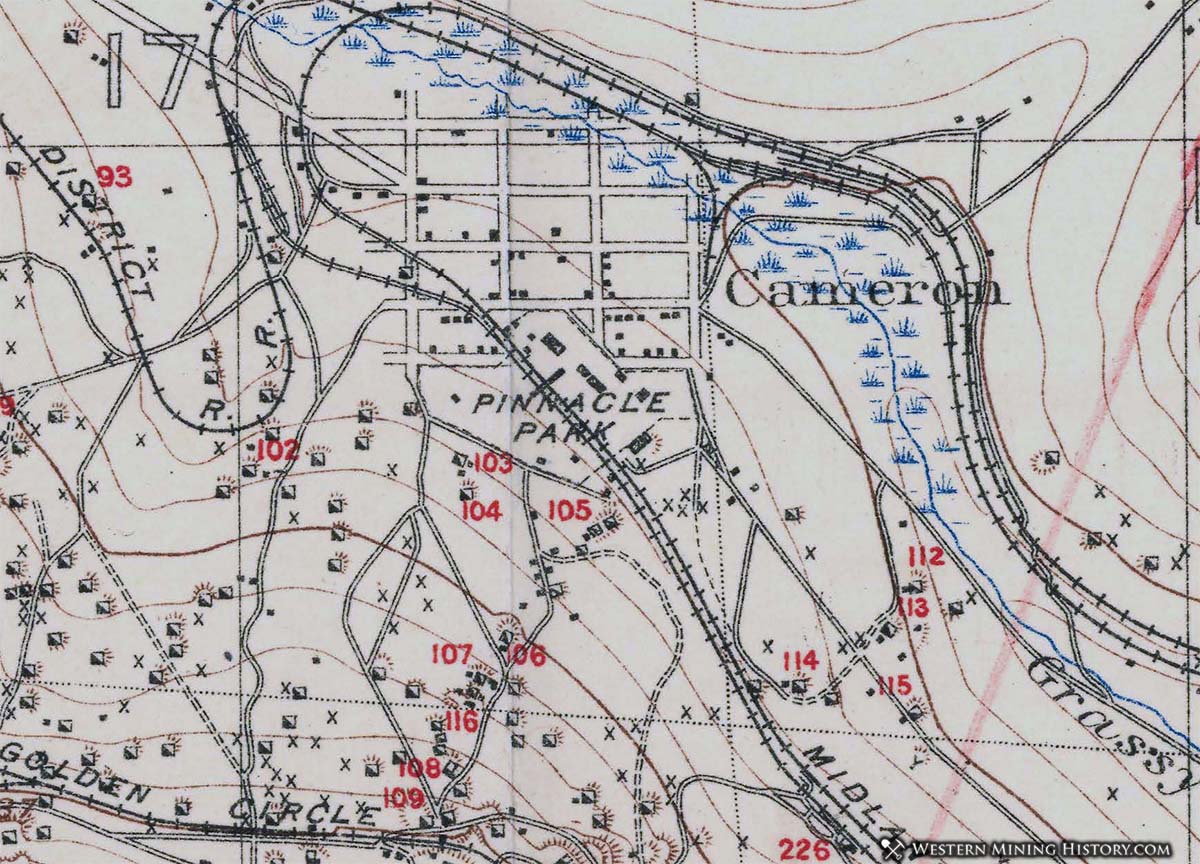 1903 map of Cripple Creek District mines shows the layout of Cameron and the nearby mines.

The mines directly adjacent to Cameron, seen on the above 1903 map as 103-105, are the Elsmere, Flying Cloud, and Mitchell.

Of the numerous ways that the citizens of mining camps found entertainment, this report of a "Broadsword" Contest, which appeared in the July 6, 1900 edition of the Aspen Daily Times is certainly one of the most unique events.

BROADSWORD CONTEST. The broadsword contest at Pinnacle Park between Ivan de Malchin , the Russian champion and Sam W. Vidler of this city resulted in a draw. There were about 1,500 persons present. The contest was exciting. Upon one of the charges the Russian's horse reared and the hoof struck Vidler full in the breast, battering the culrass shapeless and almost unseating him. While the points were 11 to 8 in favor of the Russian, the agreement was a draw was to be declared providing both men were in the saddle at the conclusion of the twenty-first attack.

The referee so decided and the men meet again July 5. In the twentieth attack the Russian was wounded in the hand and his small linger may have to be amputated. The foil contest preliminary between Arthur Sutton of Denver and Fritz Mella of Cripple Creek was won by Muller by a score of 12 to 8.