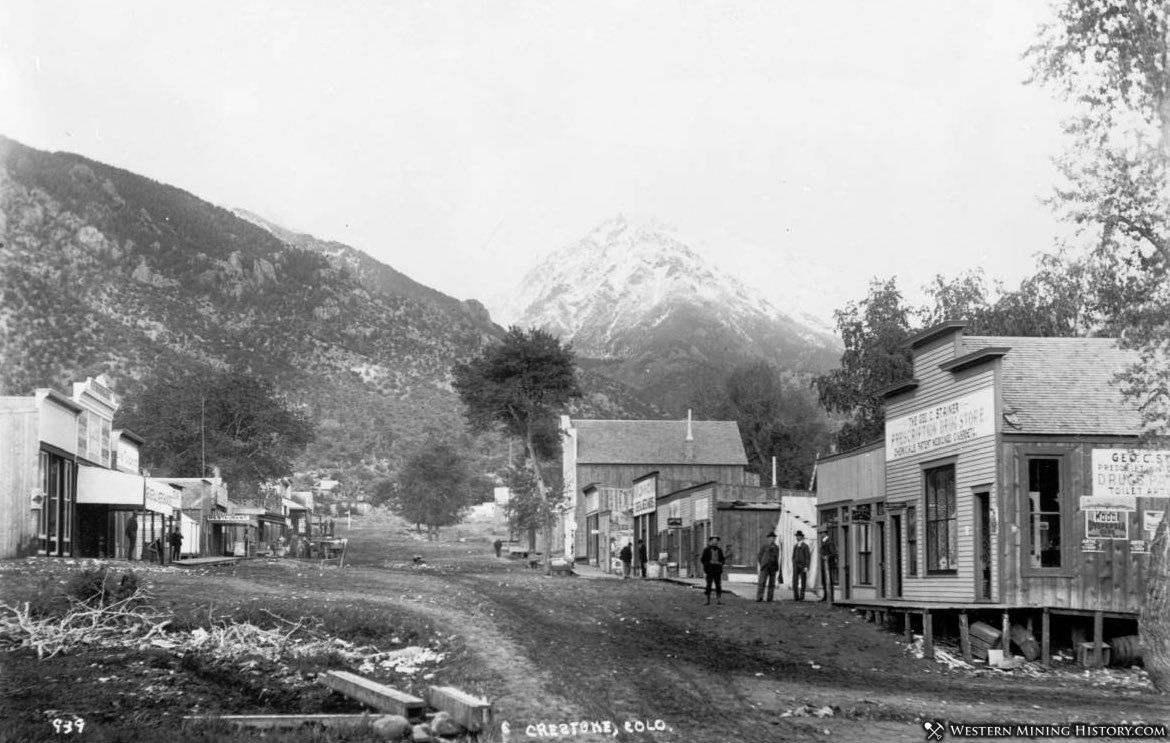 The area south of Crestone was originally part of the Luis Maria Baca Grant that was established in 1860. Cattle ranching was the first activity on the grant, and ranchers the first settlers in the area.

By 1879 prospectors were making minor gold discoveries which would result in the town of Crestone being established in 1880. The town got a post office that year, but remained a small mining outpost for many years.

Additional discoveries and new investment by Eastern capitalists resulted in a boom at Crestone starting in 1900. Along with the usual assortment of saloons and general stores, the town got a new hotel. By June of 1901 the town was connected to the outside world by rail. Crestone peaked at this time with around 800 residents and an estimated 2,000 people in the larger district.

A February, 1901 edition of the Salida Record describes the excitement at Crestone:

"The building boom has begun in earnest. Every coach is loaded with people. Many new schemes are set afloat for making money and while some may make others will lose as in any new mining camp. All of which is due to the fact that Crestone is known to be a beautiful place in which to live; that it is adjacent to a rich mineral belt on one side and an equally rich agricultural section on the other, and is soon to be accessible by a broad gauge railroad"

The boom at Crestone faded and the town declined, but was never abandoned. After World War II, only 40 people remained, mostly cowboys working on the adjacent ranch.

Crestone's beautiful location adjacent to the Sangre de Cristo Range and it's accessible location kept the town alive long after other mining camps in the area disappeared. In the 1970s, a portion of the Baca Grant just south of Crestone was purchased and transformed into a housing development. The development was not a financial success, and later the owners transitioned the venture into a spiritual center.

Today the town of Crestone has around 150 residents, with many more people living in the area south of town that is a housing development and spiritual center.