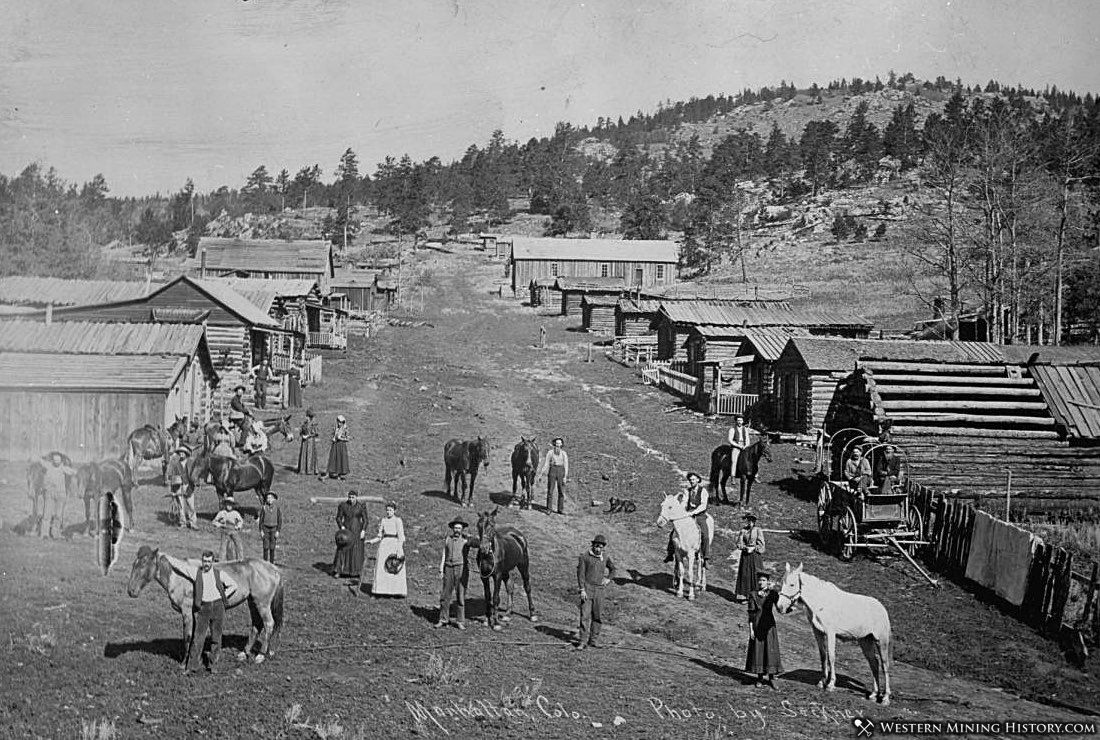 Manhattan was the site of a small gold excitement following discoveries in 1886. By 1887 the town was laid out and a post office was established.

Development of the Manhattan district was slow, impeded by the low-grade nature of the local ore and the remote location of the mines. The town peaked in the late 1890s but declined shortly after. The post office was closed in 1900 and the school in 1904.

Today Manhattan is a ghost town with few remains.

The following article from a May, 1892 edition of the Loveland Leader describes the optimism about Manhattan district mines (the rest of the text on this page is quoted from the article).

FUTURE PROSPECTS BRIGHT AT LARIMER COUNTY'S CAMP - A Huntington Mill being transported to the scene of Operations - new buildings being erected, and much interest manifested.

On a recent visit to Fort Collins we had the pleasure of meeting Mr. B.F. Burnett , a gentleman largely interested in mining operations, and the chief mover in the Fort Collins Mining Exchange. While this exchange will be conducted in the interest of the mining industry of the entire county, the camp at Manhattan is the only one receiving any attention at present. This is due to the fact that this camp is the only one in the county at which actual developing is being done. We were shown some samples from our own Redstone, however, and Mr. Burnett expressed a belief that there was paying mineral in that region.

In the course of a conversation with Mr. Burnett we learned something of what had been done at Manhattan so far. A little over a year ago Captain Thomas, manager of the French Creek Mining and Milling Company of Chicago, paid that camp a visit, and after a thorough investigation became so impressed with its prospects, that he returned home and laid the matter before his company, and the result was that it was decided to put up a mill at the camp and start operations.

The mill arrived at Fort Collins some time ago, and a part of it has already been hauled to the camp. Owing to the recent wet weather, however, it has been impossible to transport the remainder, which is loaded on wagons, and will be moved as soon as the roads improve. The mill is what is known as the Huntington mill, with a Dodge crusher and concentrator. It will have a capacity of about thirty tons per day, and will meet all the requirements for the present. There is a large quantity of good ore on the dumps, and the mill will be started just as soon as it is erected. Considerable building is going on at Manhattan, and the outlook for the future is very bright.