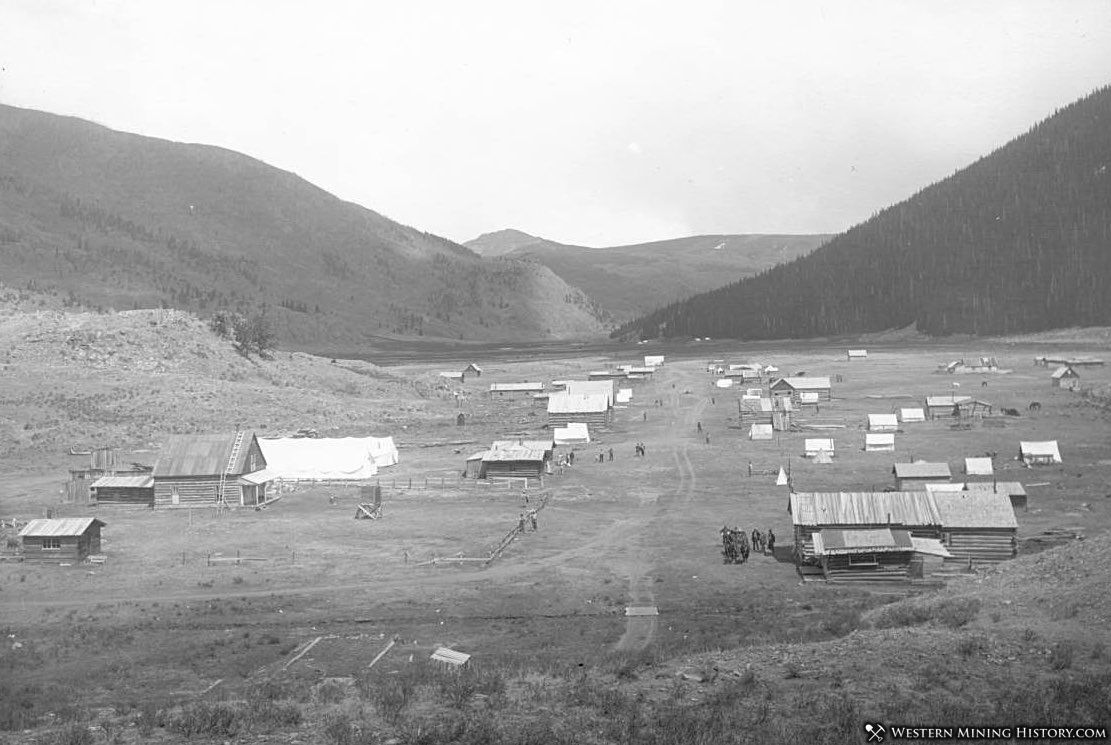 Platoro was not the first settlement in the area but it became the largest and thus the center of a district that saw peak periods of activity around 1888 and 1913. Some sources state that Platoro got started in the early 1880s, however no newspapers mention a town by that name until 1888, the same year that the Platoro post office was established.

It is likely that prospectors were in the area for some time before Platoro got it's official start, but it wasn't until a mini-boom in 1888 that the town became official and took the name Platoro, which is taken from the two spanish words Plata for gold, and Oro for silver.

Platoro never became a large town and dwindled to just a handful of residents not long after the 1913 excitement. The post office closed in 1919. Platoro became a ghost town but was reborn as a small resort town owing to its location near Platoro Reservoir.

The 1917 publication Geology and Ore Deposits of the Platoro-Summitville Mining District, Colorado by the Colorado Geological Survey gives the following history of Platoro.

The town of Platoro is delightfully located at an elevation of 9,900 feet, in the midst of a flat, open expanse of the Conejos River valley that measures some half to three-quarters of a mile wide and three miles long. 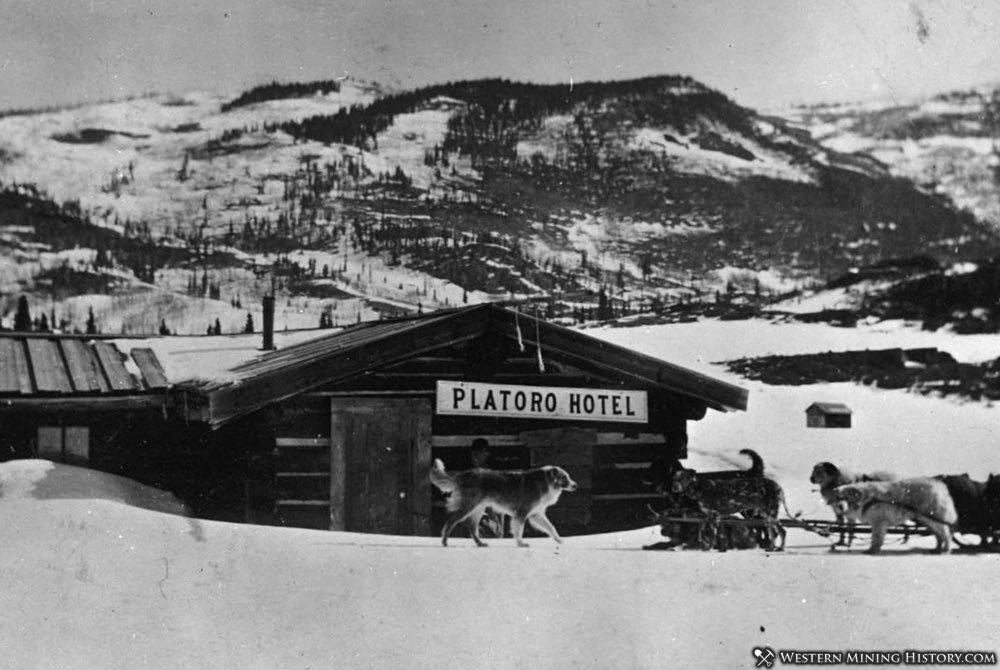 There was formerly a good road following all the way down the Conejos valley to the railroad at Antonito, a distance of some sixty miles. This road was not passible in the summer of 1913. Two other roads are available for teams. The shorter leads to the Worrel ranch in the Alamosa valley and from there to Monte Vista and to Alamosa in the San Luis valley.

The distance to Monte Vista is forty-eight miles, and to Alamosa a few miles further. Between Platoro and the Worrel ranch, a distance of fifteen miles, the road climbs over a high mountain ridge and is not kept in repair.

The longer of these two roads goes to the west over a low divide to Stunner in the Alamosa valley, distant only four miles. Over a considerable portion of these four miles the road was found to be in bad shape, but from Stunner all the way to the towns of the San Luis valley an excellent road leads.

This camp is said to have been opened in the early eighties, some ten years after ore was first discovered at Summitville, and grew rapidly until in 1890 it contained some 300 population.

In this time one or two very promising mines were developed and a large number of claims staked out, and worked to a greater or less extent. Extremely rich silver ore seems to have been shipped from several of the properties, but the rich ore soon gave out, and the low-grade ores could not be worked with profit owing to the remoteness of the camp.

Platoro received a great, though temporary, stimulus in the spring and early summer of 1913, because of the discovery of very rich ore at the Gilmore mine on Klondyke Mountain to the west of the town. As the ore was in the form of telluride of gold, and similar, therefore, to the gold ore of Cripple Creek, it was not surprising that in popular imagination, especially in the imagination of those who happened to have interest in mining claims in the vicinity of Platoro, this mining camp was in a way to become a second Cripple Creek. 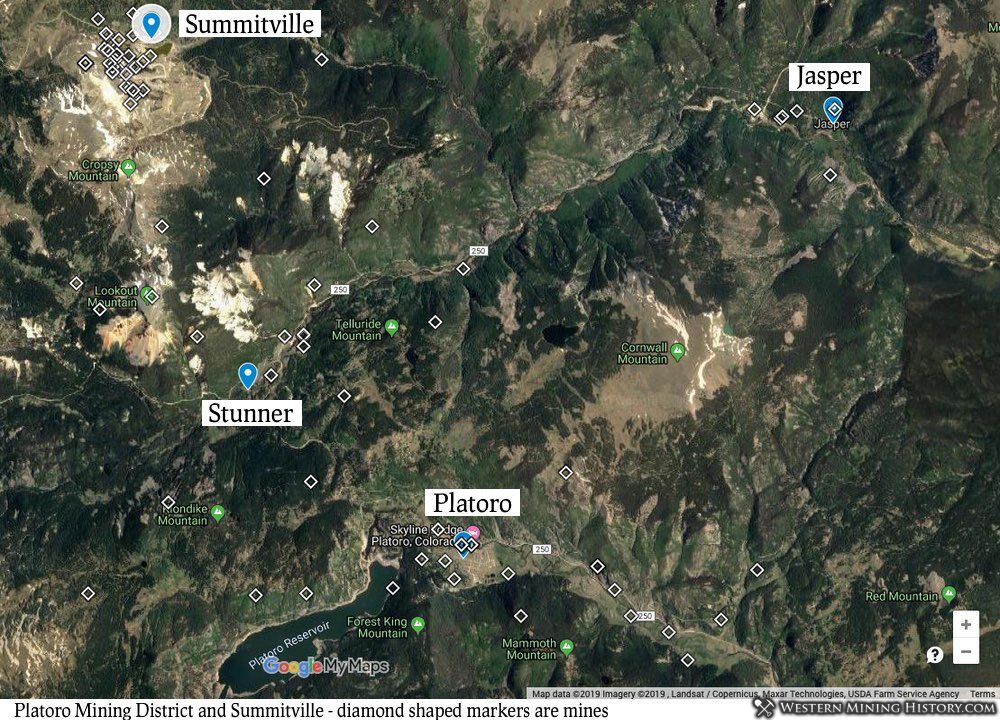 Map of the Platoro mining district and Summitville

The easy prophecy made by some enthusiasts soon after this gold strike became known, that the summer of 1913 would see 5,000 or 10,000 prospectors making their way to the Platoro district, was hardly realized. Still the buildings of the town were inadequate to meet the requirements of those that did come, and a large number of tents were put up, and Platoro had for a time almost the appearance of a tent city.

As the summer passed and it became known that the rich gold ore at the Gilmore mine had apparently given out and no further discoveries of equal richness had been made, the population gradually dwindled away to a fraction of those present in June.