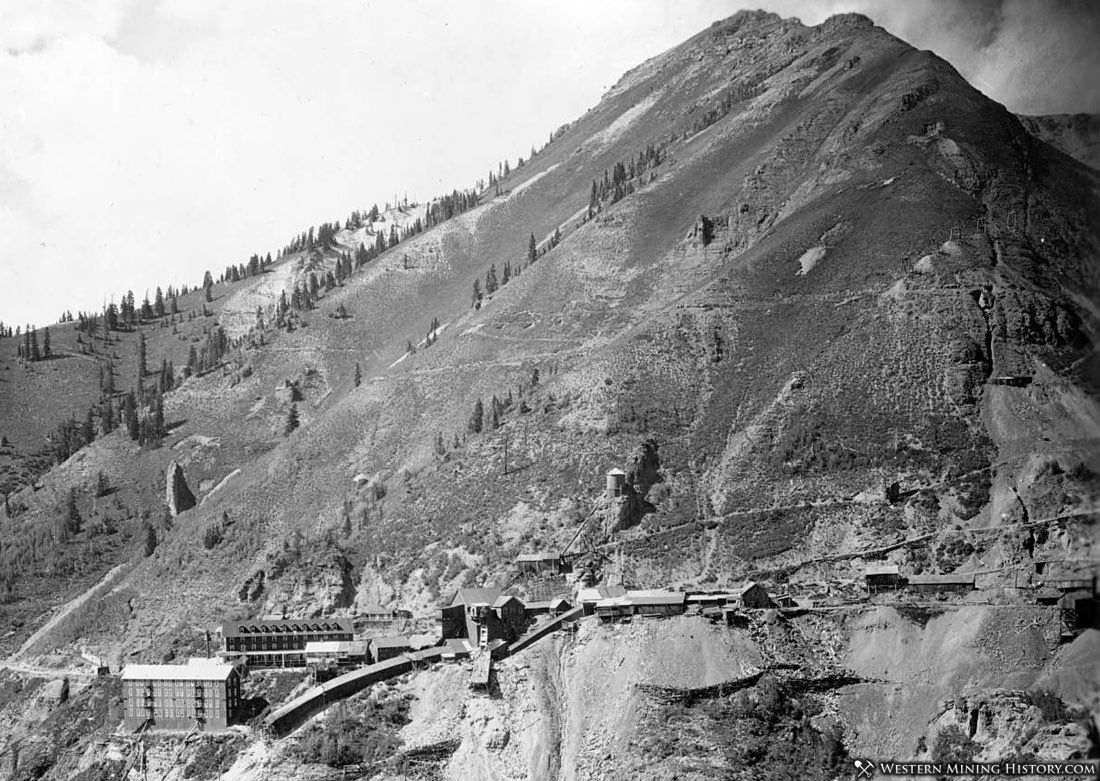 Smuggler mine and camp 1936

Peak Population: Around a couple hundred

This town record relates to the settlement of Smuggler that consisted of the company town of the Smuggler-Union mine, one of the chief producers of the Telluride district. Smuggler had a post office from 1895 to 1928.

Discovered in 1875, The Smuggler vein was the first gold discovery in San Miguel County. However, due to the extremely remote and rugged terrain, no ore was shipped until 1881. It wasn't until the mid 1880s that significant ore shipments were made from the Smuggler-Union mine. The mine would grow to be one of the three largest in the district, along with the Tomboy and the Libery Bell.

Reports put the population of the mine camp at two to three hundred. Historical photos show two large boarding houses built precariously on the steep mountainside.

The camp, like the nearby Tomboy, had a YMCA equipped with a bowling alley. Miners from the Smuggler and Tomboy camps would compete in bowling tournaments. In 1908 the Smuggler branch of the YMCA was closed, and the facilities were consolidated at the Tomboy location.

Historical newspaper articles reveal that Smuggler was a mine and camp subject to frequent violence related to labor disputes, many fatal mine accidents, and destruction by fire and avalanche. In November of 1901, 22 men were killed as a result of a fire in the mine. During a period of serious labor unrest and violence in 1901 and 1902, two superintendents of the mine were murdered. 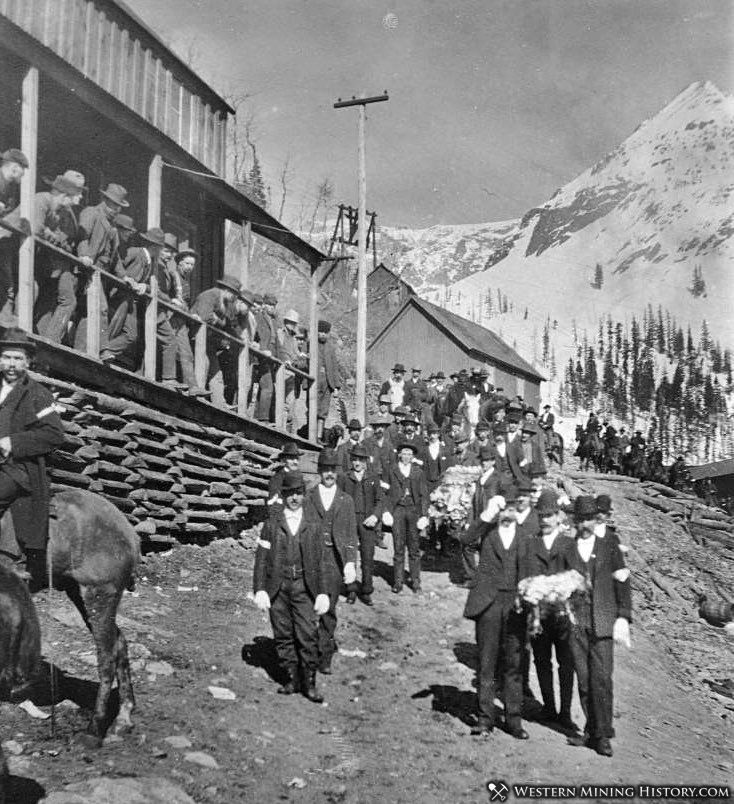 Funeral procession for Superintendent Charles M. Baker at the Smuggler Mine 1902

The following articles recount some of the unfortunate events and acts of violence that occurred at the Smuggler-Union mine and camp:

AUSTRIAN MINER KILLED AT THE SMUGGLER MINE
From the San Miguel Examiner April 14, 1900

A miner named John Stringari, an Austrian, employed at the Smuggler mine was instantly killed Thursday night by drilling into a missed hole in the drift of the mine, the drill being driven through the head of the unfortunate man, entering between the eyes and coming out of the back of the head. Under taker Glenn prepared the remains for burial, and the funeral will occur tomorrow afternoon at 2 o’clock from the undertaking rooms.

Deceased was a member of the Ouray miners union, and had been on this side about six weeks. He had no relatives in this country. The union will have charge of the funeral services. 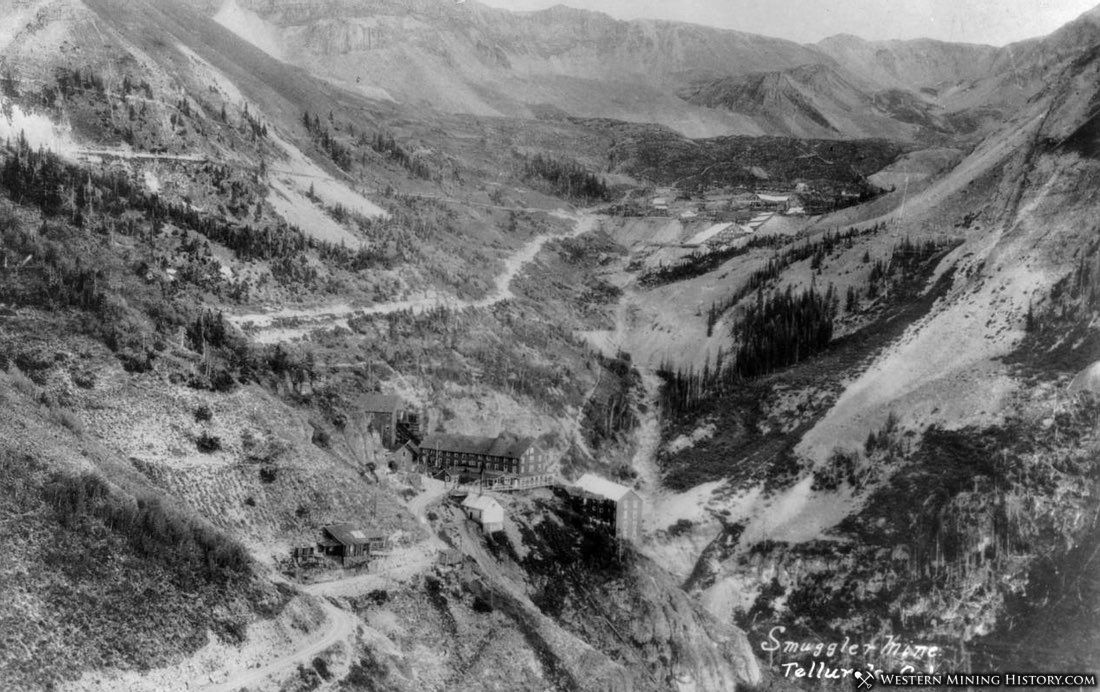 Smuggler mine with the Tomboy mine in the background

SERIOUS TROUBLE AT THE SMUGGLER MINE
From the Telluride Daily Journal July 3, 1901

Practically all the Men on the Liberty Bell and Tomboy Mines Have Gone Out. Early this morning word was received in town that there was considerable shooting going on at Smuggler at 5 o'clock and many kinds of rumors were afloat. The trouble is only a part of the strike trouble which has been brewing for some time and as near as the Journal has been able to learn from reliable sources the facts in the case are about as follows:

About 5 o'clock this morning men who were stationed on the different hills around Smuggler and the Sheridan dump opened fire on the office and bunk houses belonging to the Smuggler Company, and the first rumor to reach town was that eight or ten men had been killed, but this proved not to be true. However, it is positive that Will Jordan was shot in the right hip; Charles Becker, superintendent of the mine, had his right arm broken and badly shattered from a bullet; Shift Boss Nicholson was shot in the head, and a Mexican trammer by the name of J. Lujan, was killed.

Jordan was brought to town about 2 o clock this afternoon by five of the men who were working for him on the Sheridan dump and tells the following story in a personal interview with a Journal reporter:

He says he was in the office when the shooting started and when he went outside at about 5:15 this morning he was met by several men, one of them shooting him in the right hip. He started on a run which caused several more shots to be fired at him. He got in one of the mine tunnels to hide and shortly afterwards one of his men went in and found him quite weak from loss of blood. After some time they managed to get word to others who were in hiding and at 11:30 they started for town with Jordan bringing him down over the old Sheridan trail, it being impossible to come any other way as all entrances to the basin are being guarded.

Jordan was taken to Doctor Hall's office and it was found that the bullet had entered the right leg near the groin and missing the bones had gone clear through, coming out a little lower down. The wound is quite painful but not necessarily serious.

W.P. Mendenhall, who helped bring Jordan to town, says he was asleep when the trouble started and when he got outside was held up, robbed of his watch and knocked down, but in the excitement that prevailed he escaped.

The body of the Mexican trammer is still on the Sheridan dump.

Doctor Sheldon was called to the Bullion tunnel to dress the wounds of the injured men and sent a message about noon saying that Becker had a bad arm, and that Nicholson, who was shot in the head, has a chance to live, but that is about all. At that time those were the only men on either side whose wounds he bad attended to.

Most of the forenoon shots were exchanged between the miners, deputies and guards, but at 11 o'clock all was quiet with the exception of a few shots now and then.

Some time this forenoon one of the cabins near the office building was blown up, but it is impossible to learn what damage, if any, was done.

The Liberty Bell and Tomboy miners have practically all gone out in sympathy, and those properties are all but idle in the way of active operations. Miners were seen coming over the range this morning from the Ouray and Silverton sides and it is reported that the Camp Bird and Revenue miners are also out in sympathy, but as to these last named properties, the report cannot be verified.

The mayor has ordered all saloons to be closed from 6 p.m. to 6a.m. until otherwise notified.

Telephone wires have been cut and there is no communication between town and Smuggler, but at the hour of going to press everything seems to be quiet and nothing new or definite is learned.

Miners at the Smuggler mine boarding house

SKELETON OF W.J. BARNEY RECOVERED
From the Sacramento Union August 9, 1907

A special to the News from Telluride, Colo., says: What is said to be the skeleton of W.J. Barney, the timber man employed on the Smuggler-Union mine, who mysteriously disappeared in June, 1901, was exhumed yesterday afternoon near the Alta mill, near Gold King basin, twelve miles from town, by General Bulkeley Wells, manager of the Smuggler-Union Mining company and others.

According to Wells’ account, the remains were found in an improvised grave and its location was pointed out by Steve Adams, now in jail in Idaho awaiting a second trial on the charge of murder, when he was here in June, 1906, in the custody of Wells.

It was after Adams made the alleged confession which he afterward repudiated and in which he is supposed to have acknowledged being the assassin of Arthur Collins, formerly general manager of the Smuggler-Union mine, and to be familiar with the places where the bodies of W.J. Barney and Wesley Smith, a shift boss of the Liberty Bell mine, were buried.

Adams was brought down here by General Wells to point out the graves of the missing men. When Wells and Adams went up into Gold King basin there was more snow on the ground than had been anticipated, and several years having elapsed since the body had been burled. Adams was unable to determine exactly where the grave was. He showed General Wells the place, according to the best of his recollection. Adams evidently gave an accurate description of the place, for it is understood little difficulty was experienced in uncovering the grave.

A part of the body or skeleton, including the teeth and that portion by which identification could be most readily established, was brought to town by General Wells. Barney incurred the ill-will of the union here by working at the Smuggler mine after the strike in April, 1901. It was this strike that caused the riots of July 3rd of that year.