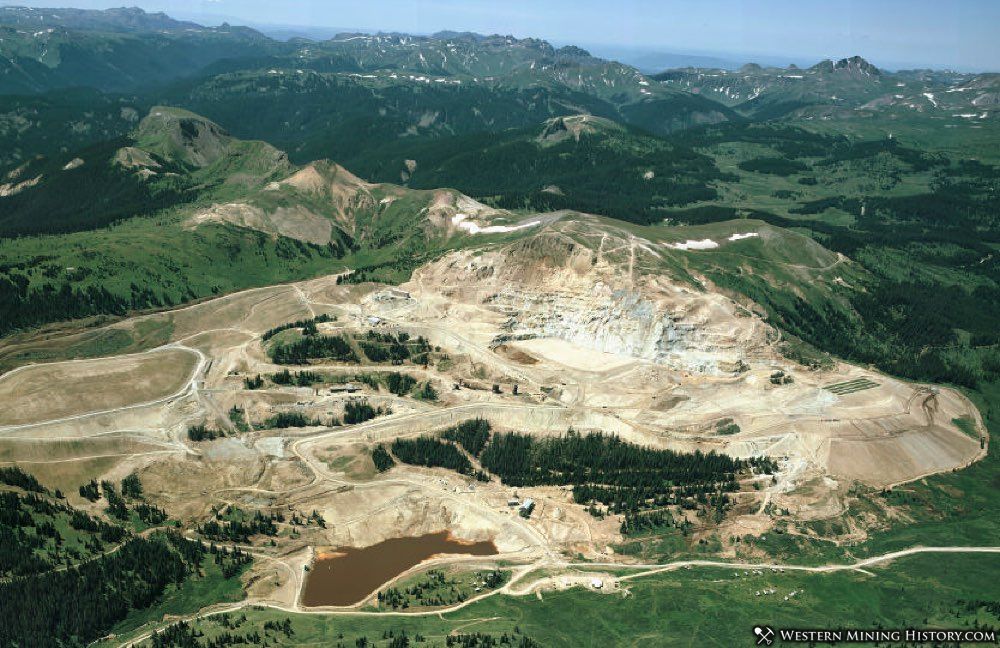 Summitville was the location of one of the earliest gold discoveries in the San Juan Mountains of Colorado. Despite the historical significance of the district not many details are available about the town of Summitville during its early days.

The camp was originally known as Summit and a post office was established in 1876. In 1880 the town and post office name were changed to Summitville. The Summitville post office operated from 1880 to 1912, and again from 1935 to 1947.

Placer mining was conducted seasonally for the first few years. The district's high altitude and harsh weather resulted in most miners leaving each winter. It wasn't until 1875 when hard rock mines started operating that attempts were made at a year-round community.

Even the district's largest mines often had to close down for part of the winter as the depth of the snow made mining and milling impossible. Large parts of Summitville's population would winter in the valley each year. A newspaper article from Februrary 1891 mentions the following related to Summitville's hard winters:

A large number of men employed by the Annie company, at Summitville, arrived in Del Norte, the Annie mills having closed down for the winter. From three to four months must elapse before Summitville will witness any great amount of activity in business. The Annie has been running sixty stamps. 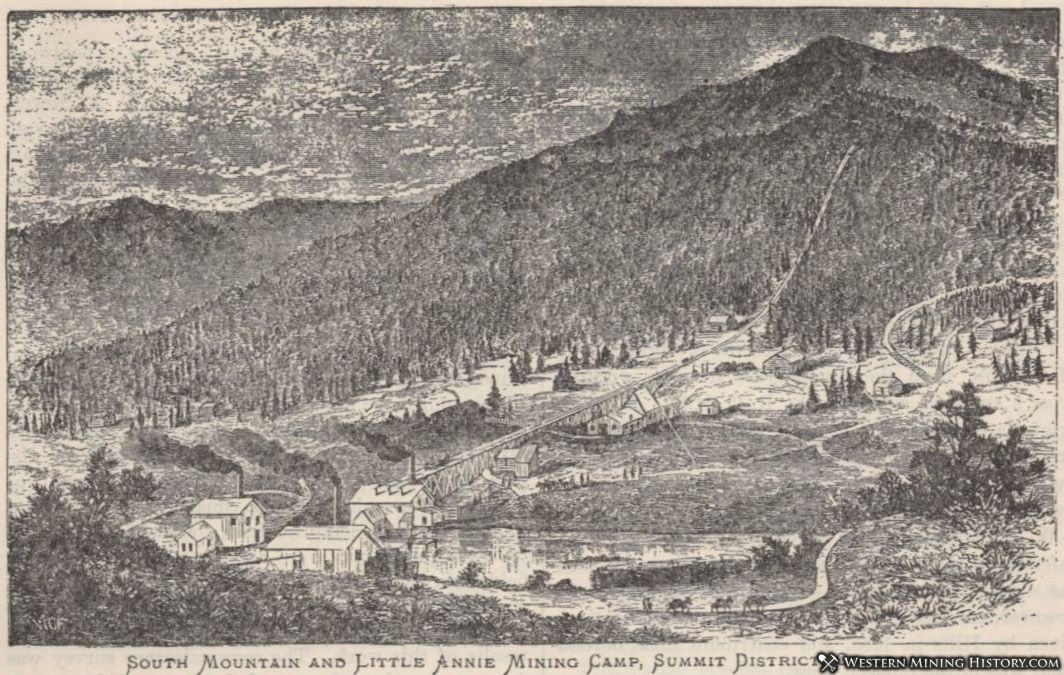 Summitville peaked in the early 1880s. By 1883, nine stamp mills crushed ore from the mines and an estimated population of up to 1,000 people called Summitville home (peak population numbers vary widely from 600 to 1,500). Even newspapers published at the time struggled to put a number on Summitville's population. An August 1882 edition of Saguache Advance stated the following:

The population of Summitville is variously estimated from 500 to 1,500 souls, and the continuous rustle tramp of people remind on of the big days of Leadville in the days of 1878-79-80.

A fire in July of 1891 destroyed eight buildings in the business district. Mining in the district slowed during the 1890s and the closure of the post office in 1912 seems to signal the end of Summitville as a historic mining town.

Summitville had various periods of mining activity during the 1900s as old mines were leased and attempts were made to reopen them. These ventures seemingly did not produce satisfactory results as the town did not gain a permanent population that would justify a post office during the period of 1912 to 1935. 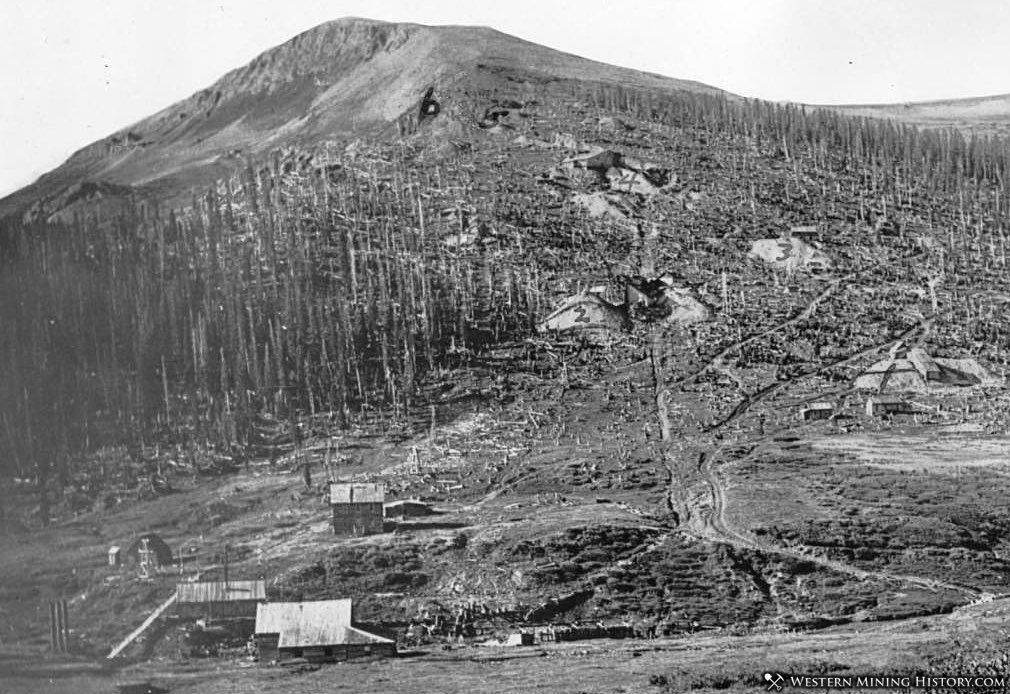 Summitville historic mines on South Mountain ca. 1915. Compare this view to the 1877 illustration above. The path of the former Little Annie Tramway is visible in this view

The increase in gold prices during the great depression resulted in a new round of gold mining in the district, but the closure of gold mines by government order during World War 2 finally put an end Summitville's long run as a notable gold camp.

Summitville is now notorious as the site of one of America's worst environmental disasters. The Summitville Mine, an open pit mine that began production in the late 1980s, was severely mismanaged by the Canadian company that operated it. After extensive environmental damage was uncovered in adjacent watersheds as a result of toxic runoff from the mine, the Canadian operator, facing millions of dollars of cleanup costs, filed for bankruptcy. The EPA took over the mine and designated it as a superfund site. Over $250 million was spent over the next couple decades to mitigate the effects of the disaster.

The 1917 publication Geology and Ore Deposits of the Platoro-Summitville Mining District, Colorado by the Colorado Geological Survey provides details of Summitville's early history (the rest of the text on this page is quoted from this book).

Early History of the Summitville District

Owing to the discovery of very rich gold ore in several of the mines in this district in the early days, Summitville for a brief space enjoyed one of those sudden, but evanescent, booms for which the Rocky Mountain west has become celebrated.

Owing to the absence of authentic records it is impossible to verify most of the stories related concerning the development of this mining camp, but a file of the Rocky Mountain "News", published in 1877, contains an account of the discovery of the ore deposits of this district which Frank Hall considered sufficiently reliable to incorporate in his history of the state, published in 1895. In the absence of more authentic records, this account is herewith presented:

“The first discovery of gold was made in Wightman's gulch about the last of June, 1870, by a party consisting of James L. Wightman, E. Baker, J. Cary French, Sylvester Reese and William B. Wightman. All the party excepting Reese and Wightman left by the middle of September, the two last named remaining engaged in sluicing until the 9th of November, when they also took their departure heavily packed, and made their way through snow waist deep, reaching the Rio Grande three days later."

"In the spring of 1871 a large number of people flocked into Summit, hundreds arriving while the snow was still very deep and work utterly impracticable. A general disgust followed, and by the last of August there were but three men in the district - P.J. Peterson, J.L. Wightman and J.P. Johnson, who remained until about the 20th of October, Wightman and Peterson being the last to leave. They took the gold produced by sluicing to Denver and had it refined at the mint, dividing $170 between the three after paying all expenses of the season's operation."

"Meanwhile several lodes had been found and claim locations made thereon. In 1872 a few locations were made, but in 1873 there came a new immigration, and it was in that year the richest mines were located. The Esmond (now the Aztec) was discovered in 1872 by Theodore Goupil, and by him sold to Dr. Adams. On the 13th of September, 1873, F. H. Brandt and P. J. Peterson located the Little Annie, Del Norte and Margaretta mines, the former being named for a daughter of Mr. Peterson, the latter for a sister-in-law of Mr. Brandt."

"During 1874 a large number of locations were made and the attention of mine owners turned to getting in machinery for reducing the ores. Dr. R. F. Adams, after locating the Summit mine, shipped a small lot of ore to be tested, and, having satisfied himself that it would pay, located a mill site, and ordered a mill, which was brought in, set up and commenced running the next spring."

"The owners of the Little Annie, Del Norte, Margaretta, Golden Queen and Golden Star, in the winter of 1874-75, contracted with capitalists to erect mills. Dr. Adams' five-stamp mill began work as soon as the advance of the season permitted."

"In the latter part of May the machinery for the Little Annie and Golden Queen mills reached Del Norte from Chicago, and was hauled over the summit of Pindata Peak and various spurs of the main range. The district was occupied for the first time during the winter of 1875-76, which was a remarkably mild one. That is, the miners built cabins and remained there all winter. In July, 1877, the population of the district was about 250."

Continuing the narrative to a later date, Hall states that:

“Subsequent to the discoveries heretofore mentioned, the Little Ida, Aztec, Odin, Golconda, Golden Vault, Parole and others were located, and according to reports of that period produced about $1,000,000.• • • In 1883 there were nine stamp mills with a total of 155 stamps. The San Juan, Odin, Little Annie and Golconda had gravitation tramways for transporting the ore from mines to mills. The Iowa and Colorado Company had a wire tramway of the Halliday patent for like purposes."

Placering, which was started in 1870, was continued up to about 1880. Considerable gold is said to have been produced in this way, but no information is available as to the actual amount. Nuggets were occasionally found, the largest of which measured about one inch.

It is known that very rich gold ore was taken out of some of the mines, as, for instance, from the Little Annie mine, and the profits to the owners must have been correspondingly great.

Since the period covered by the passage quoted above from Hall's History of Colorado, that is, since 1895, but very little ore has actually been produced, although considerable development work has from time to time been done, as will appear later. 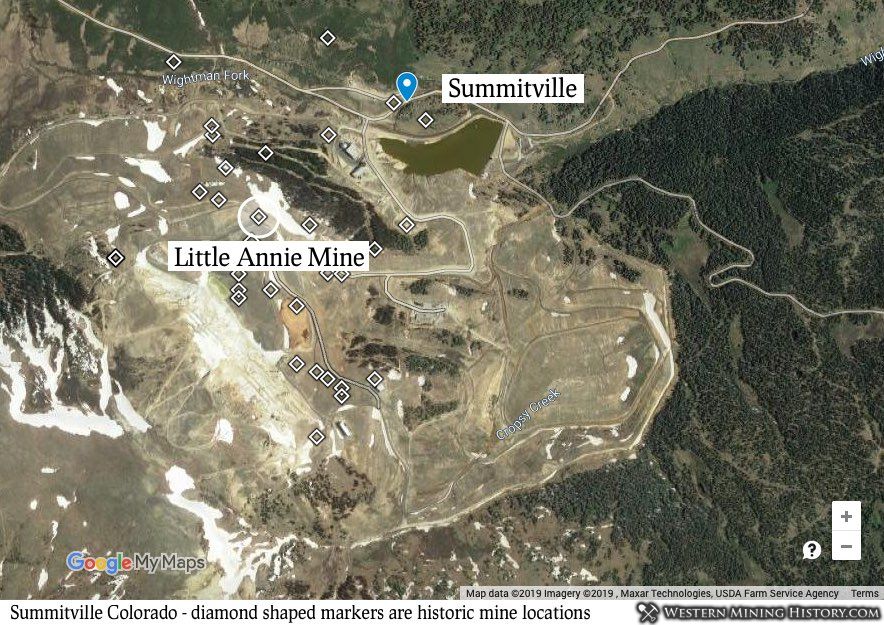 This company was promoted by George Crawford of New York, and is now, or was in 1915, controlled by T. N. Barnsdale of Pittsburgh, Penn. A contract has been signed in accordance with which the interests of Mr. A. E. Reynolds and of the Consol Gold Mining Company are to be merged and the properties operated conjointly. The reopening of the Goleonda tunnel and the working of the various properties on South Mountain are contemplated in the near future.