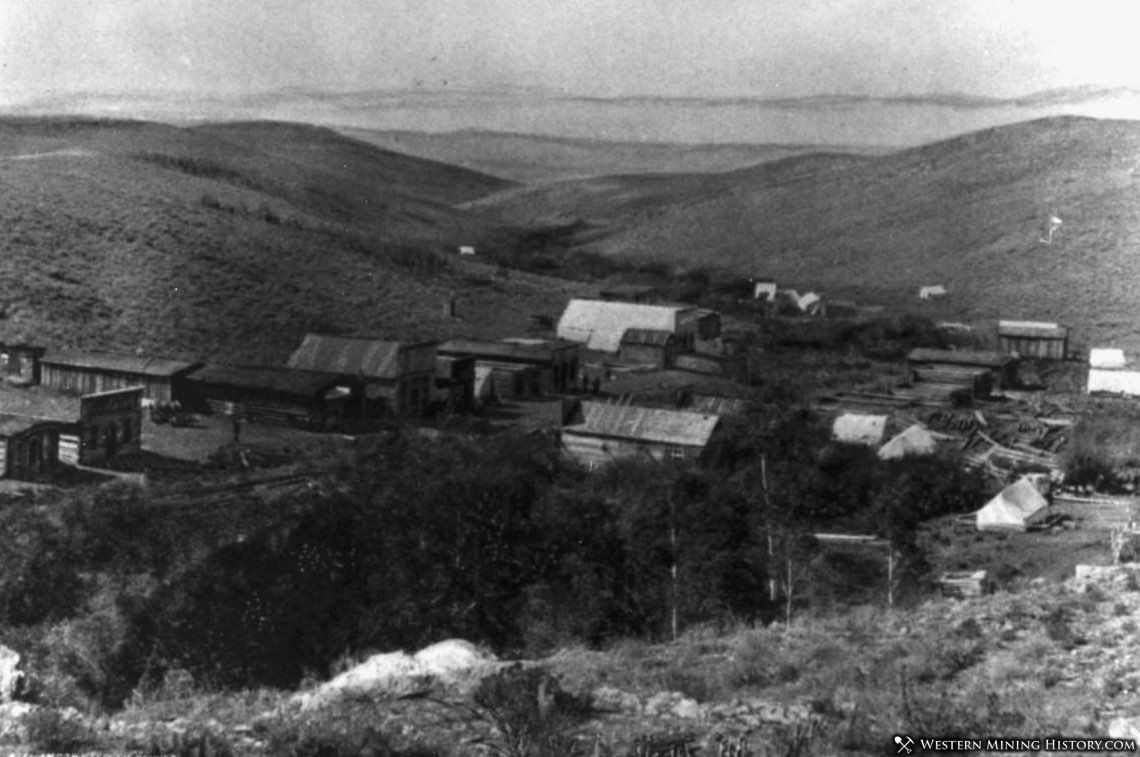 Gold deposits was discovered in 1894 on part of what became known as the Gunnison Gold Belt. The mines at Vulcan were the most productive in the belt, and Vulcan rapidly developed into a town of around 500 people.

A post office was established in 1895, and in 1896 the newspaper Vulcan Enterprise opened for business. Newspaper articles of the time describe Vulcan as a company town where alcohol was prohibited.

An article in an August edition of the Colorado Weekly Cheiftan describes Vulcan during its earliest days:

It is located on Camp Creek in the Cochetope hills, twelve miles southwest of Gunnison and seven miles from Spencer, the scene of considerable excitement last fall. Mr. James has the greatest hopes of the new district and has shown his confidence by setting three men to work.

He says that there are about 500 men in the district and the town of Vulcan is composed entirely of tents, but is as lively as one can well imagine. There is only one shipping mine in the camp and this was not thought to be more than a prospect hole until within the past few weeks. It is the Vulcan, from which the town derives its name, and consists only of an 80-foot shaft sunk on a vein 22 feet wide.

The owners were at work on it some months but the vein was composed of a glassy, flinty quartz that was anything hut encouraging in appearance and decidedly discouraging when panned. A sack of the ore, however. was sent to Henry E. Woods, the Denver assayer, and returns of $600 to the ton were received. Such an unexpected result seemed too good to be true. The men concluded that a mistake must have been made somewhere, but, to make sure, another sack was sent to Mr. Woods, and one to E. E. Burlingame, also of Denver. Neither sample was picked, but the returns went away up in the pictures.

Confident now of there being no mistake about the richness of the vein, the owner shipped three carloads taken from the 22 foot vein at all polnts without sorting whatever, and the smelter returned $292 in gold and 160 ounces silver to the ton. They are now making preparations to keep the Rio Grande road busy.

The mines at Vulcan were unusual in that the gold ore was found adjacent to sulfur beds, a situation that resulted in many dangerous fires throughout the district's history. The danger of sulfur fires in the mines were purportedly the reason that the mining company disallowed alcohol consumption in the camp; drunk miners would increase the danger of fire in the mines.

Gold and silver production lasted about a decade. In 1906 the mines began sulfur production and the life of the camp was extended for a time. Fire once again hit the mines, ending sulfur mining in 1910. By 1912 few people were left in Vulcan and the post office was closed.

Interest in the mines kept the camp alive with a handful of people until the early 1920s when it was finally abandoned.

Vulcan experienced labor trouble in March of 1899 that resulted in union members taking over the town and mines completely. Ultimately state militia was sent in to restore order. A March 3, 1899 edition of the Herald Democrat describes the unrest at Vulcan (the rest of the text on this page is from the article):

The situation at the Vulcan gold mine Is quiet today so far as can be learned but there are only meagre reports from tho camp as the miners have charge of the telephone and will not allow news of importance to pass over the wires.

Union miners are running everything in the town and Superintendent Davidson has been forced lo start up the mine with all union men which was done today. Warrants have been sworn out for a large number of men and the sheriff is now on the way to serve the papers. It is expected that he will have trouble when he attempts to serve the warrants. Union men sent here last night are in Gunnison watching the movements of officers and one of them has been placed In jail. He is a brother of the man who shot Foreman Snow Monday night. Snow Is reported to be much worse and is expected to die of his wounds.

A gentleman in Leadville who is familiar with the Vulcan mine, the scene of the strike and shooting a day or two ago, says: "The Vulcan is a very remarkable mine, being an extinct geyser. It has extraordinary ore, resembling pumice, being very light weight, yet carrying smelter returns, gold at the rate of ten ounces to the ton. Occasionally specimens are had running up into the thousands of dollars.

Part of the crevice filling - the vein is a broad one - is of native sulphur and the mine has shipped it by the tons. The vein also contain massive iron pyrites. The water of the mine is charged with sulphuric acid and eats of the machinery so that it has to be frequently replaced.

The principal owners are Davidson and Himebaugh, the hotel men of Colorado Springs. They put a great deal of money in the development of the Vulcan, and have stayed with it when everybody else was ready to desert the camp.

The sympathy of the camp, however, is with the strikers for this reason. The management of the mine has followed a prohibition policy as regards to liquor. The town is situated on the lodes of the company owning the Vulcan. The residents therefore are mostly squatters. The management has always refused its sanction to the selling of liquor, chiefly on the reason that the mine was a risky one to work in and an inebriated miner would endanger the lives of the other employees.

On one occasion in the Mammoth Chimney mine adjoining the Vulcan, the mine was set afire by the sparks from the steel. The sulphur quickly caught and it was with difficulty that the fire was put out. The management of the Vulcan has therefore been interested in keeping only sober men employed because of the easy possibility of accidents."