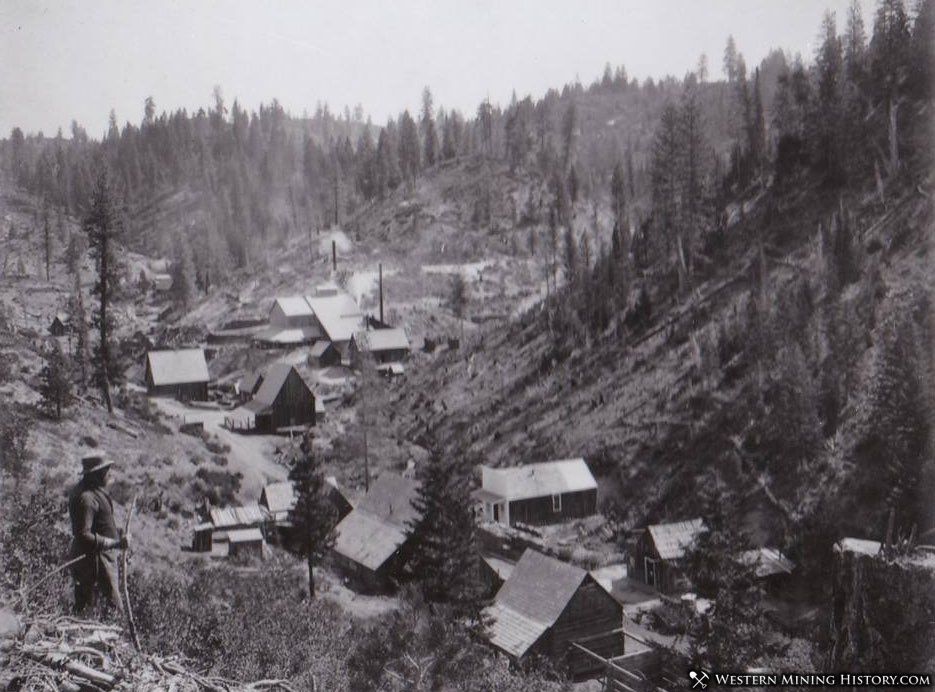 Banner's post office was established in 1878 and operated intermittently until 1913. Not much is known about the town of Banner, but the publication Gold Camps & Silver Cities provides the following account of early discoveries in the district and the origin of the settlement:

Silver lodes in Banner traced out of already active Crooked River placers, which in turn had been found by prospectors radiating from Boise Basin in 1863. The placers, known as the Rocker Diggings, had enough silver with the gold that two of the operators there concluded in June, 1864, that a silver lode ought to be sought in that locality.

Inexperienced in such prospecting, they came over to Placerville and induced Jess Bradford, an old hand in dealing with silver ledges, to come to examine their part of the country. Bradford persuaded James Carr to join him, and after a few days prospecting northward from the Crooked River placers, Bradford and Carr found the Banner ledge on July 6, 1864.

Taking some samples, they returned to Placerville only to find that the current craze was north on the Payette. The day after their return, Bradford joined James H. Hawley in the Payette rush; Carr, who was a partner with Bradford and some others, remained behind, however. After some time, he got the samples from Banner assayed. They proved to be rich enough in silver to stir up considerable excitement, and after waiting about as long as he dared for Bradford and Hawley to return, Carr located the Banner lode on August 8, 1864.

In doing so, not only did he list the names of the actual discoverers, but he also added to them the names of Hawley, the rest of their partners, the assayer, and one or two others who promised to be useful in the venture, including one who offered to bring in a stamp mill if he could have an interest in the claim.

As news of the high assays began to get out, interest picked up and on August 23-24, 1864, about two hundred prospectors rushed to Banner. Within a few weeks, the two new towns of Banner and Eureka were rising, and about fifty new ledges were discovered.

Aside from the original Banner, no one knew whether any of the rest of the fifty had any value or not. The ledges ranged in width from two to eight feet. Excitement among the 120 miners who had remained there reminded Morton M. McCarver, a prominent resident of Oregon who had seen a lot of mining rushes, of the early days on the Comstock at Washoe.

In the commotion, the story of Banner was already a little confused. According to the way McCarver had heard it in September, the ledge had been found by parties searching in the wrong place for an improved route from Placerville to Rocky Bar. Other than that, McCarver's story matched that of James Carr, one of the discoverers.

Before winter closed in, the pioneers of Banner were ready to go to work. In spite of severe weather, much development had started on the new lodes.

By the end of February 1865, a tunnel toward the Banner vein progressed 270 of the 300 feet that were expected to be necessary, and eight other tunnels, ranging mostly from 100 to 160 feet (one was 240), were being driven on other properties.

The community was cut off from all supplies by snow, which was eight feet deep in town then. But enthusiasm for the mines was increasing rapidly, E.J. Neale reported that prices for the properties were doubling-presumably only in the estimation of the owners, for no one could get in to buy. Two of the original locators, James Carr and I.L. Tiner of Placerville, were putting up a store, but no supplies or merchandise would be for sale until spring.

A long hard winter had delayed further development considerably, but by mid-August, the Banner tunnel penetrated the required 300 feet, where the vein was struck 150 feet below the surface. Then on October 30, at the end of the season, a ton of Banner samples, collected for eastern promotion, left Boise for New York.

Arastra production came to Banner in the early days, but stamp milling took longer to get under way. The lack of a road held the camp back until 1868. By mid-summer that year, a shaft had been sunk on the Banner vein for 80 feet below the end of the 300-foot tunnel, and an arastra was kept busy crushing the ore that was being recovered.

After a decade of arastra production, G.W. Craft finally got a mill into Banner in 1874, and capital from Elmira, New York, helped to develop the district still more in 1878. Stamp-mill production continued at Banner for more than ten years, with a considerable spurt of activity there from 1882 to 1884. Then a $400,000 sale came in 1884.

Before the district shut down in 1921, production of silver totaled nearly $3 million.