Silver City was at the center of what would be one of the largest silver discoveries in the West.

Gold was first discovered in the Owyhee region of southwest Idaho in 1863. The discovery was made by the a group of 29 men known as the Jordan party, who were ostensibly searching for the mythical Blue Bucket mine of Oregon.

The Blue Bucket mine has never been found and likely never existed, but in a fortunate twist of fate, the Jordan party ultimately discovered silver deposits in the Owyhee that would be every bit as valuable. 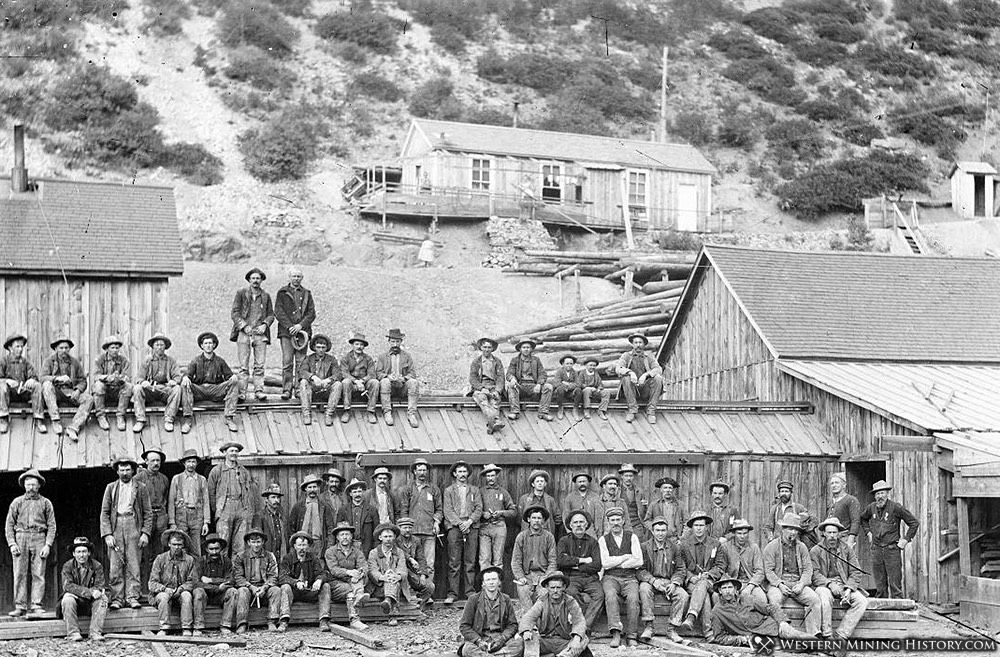 The 29 men in the party each made three claims of 900 feet each in the new district. When word of the discovery reached the Boise Basin, hundreds of men set out for the Owyhee, only to find that most of the good ground had already been claimed.

Shortage of supplies and labor slowed development of the district that first year. Despite the slow start, most of the placer diggings on Jordan creek had been mined out by 1864. Just as the bulk of the miners started leaving the area, the first significant silver deposit was discovered in October of 1864.

That winter, assays of the newly discovered deposits were reported at $2,800 in gold and $7,000 in silver per ton of ore. These values surpassed anything that had yet been discovered in the fabulous Comstock Lode of Nevada, and a great excitement started to stir over the possibilities of the Owyhee mines.

The first towns established at the new district were Boonville and Ruby city, both settled in the early months of 1864. Silver City was laid out about a mile up the canyon from Ruby City, but was not settled until later that year. 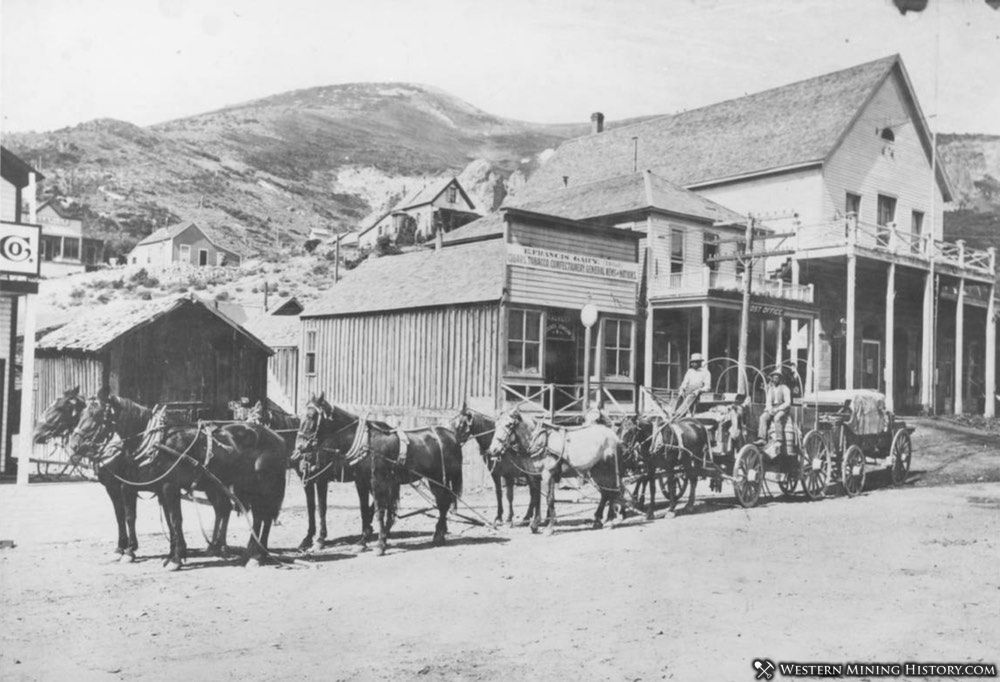 The first stamp mill was constructed in the district in the summer of 1864. The water-powered mill was built at the enormous cost of $70,000, but recovered $90,000 from the rich Owyhee mines in just 45 days.

Favorable reports of ore values in the Owyhee fueled investment in the new district and a rush to build more mills was on by 1865. Silver City was was situated among many of the mines where mills were to be built and the town experienced its first boom as money and equipment flowed into the region during the summer and fall of that year.

The Battle for the Poorman Mine
The saga of the Poorman mine is one of the Owyhee’s most interesting tales. An outcrop of silver was discovered above Silver City on War Eagle Mountain, just outside the bounds of the Hays and Ray claims. D.C. Bryan, discoverer of the outcrop, named his mine the Poorman, and it was anything but poor.

The owners of the Hays and Ray contended that the Poorman vein was an extension of the vein they were mining on their claim, and thus they were the legal owners of both veins as their claim preceded the Poorman claim. Bryan, knowing that this was likely true, rushed to mine as much of the rich Poorman ore he could before action could be taken against his mine. Before legal action was taken, over $500,000 of ore was mined from the Poorman in just six days.

Legal action was taken by both sides while the Poorman owners continued their frenzied rush to mine the rich deposit. The situation culminated on September 24, 1865 when armed men from both mines exchanged fire.

The Poorman defenders then took the unprecedented action of building a log fort name Fort Baker, “built of logs, with portholes and other means of defense usual in such cases”. At this point, the owners of the Hays and Ray gave up on an armed assault and instead intensified their legal attacks. 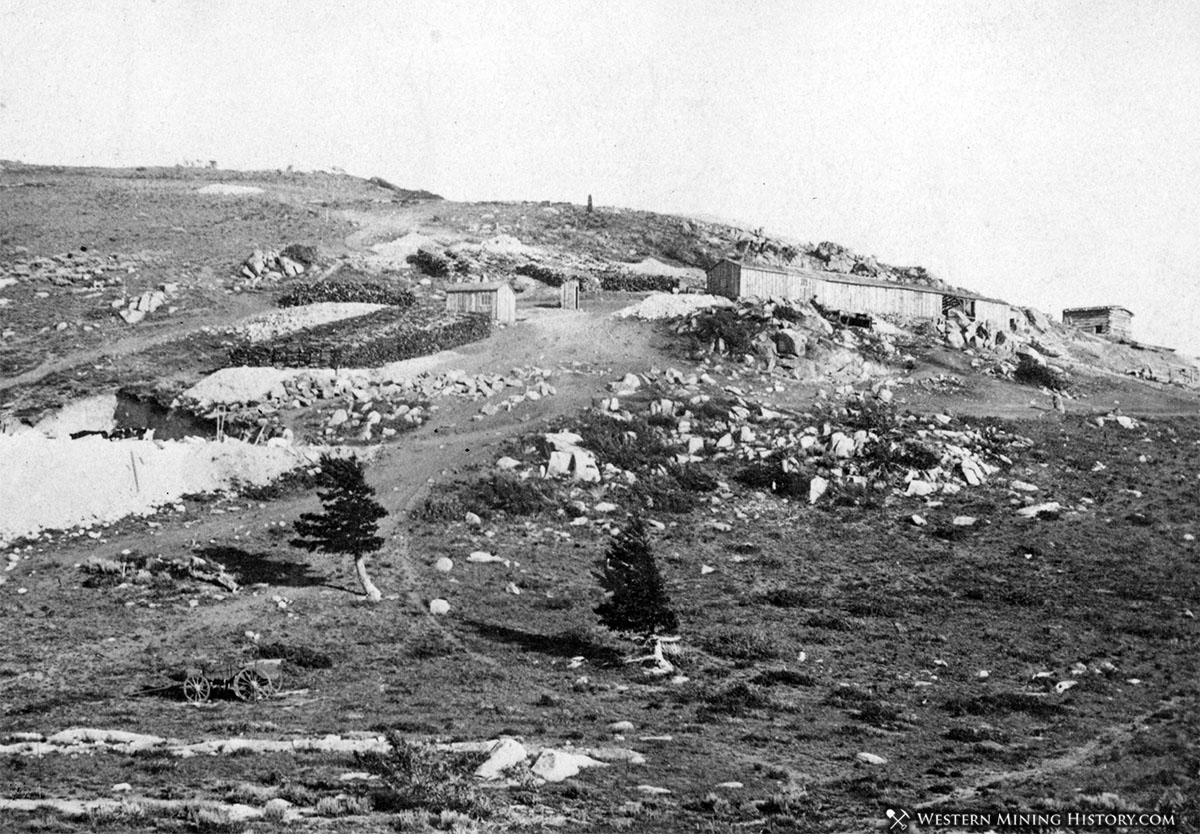 Ultimately, a legal injunction was filed in favor of the Hays and Ray owners and the Poorman was forced to shutdown. It is fascinating to read about this incident and realize just how rich these deposits were - so rich that mine owners would build log forts just to buy themselves a little extra time to hurriedly mine as much ore as they could get away with.

The Owyhee War
During the spring of 1868 another conflict erupted between two mines. This new conflict was larger in scale than the Poorman incident and became known as the “Owyhee War”. 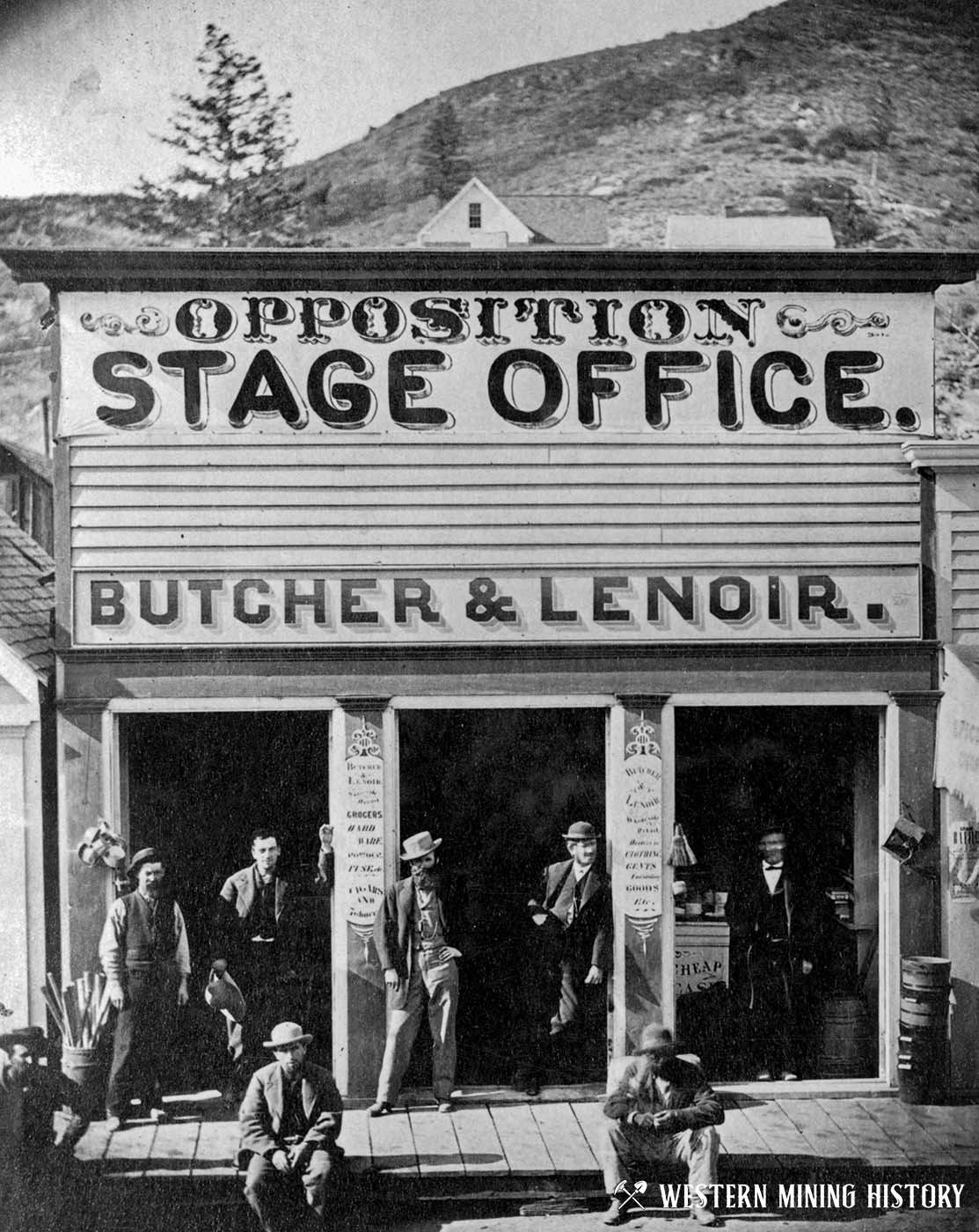 Reinforcements were brought in from around the West and hired guns started arriving in the district to shore up the forces on each side. Locals feared the conflict would spill out of the mines and engulf the surface operations.

The sheriff was seemingly helpless to resolve the conflict that involved at least one hundred armed men, and only acted to shut down saloons in Silver City during fighting.

When news of the Owyhee War reached Boise, Governor D.W. Ballard issued a proclamation that the fighting must end or troops would be sent in. Ballard addressed the citizens of Silver City on April 2 and appealed for a peaceful resolution to the situation. Violence continued however and troops were summoned to stop the fighting.

Ninety five troops, equipped with a cannon, occupied Silver City for just four days between April 4 and 8. It was clear this decisive action had put an end to the fighting and the Owyhee War was at an end.

Silver City Boom Town
Despite the remoteness of the region and conflicts among the mines, the Owyhee district was still producing exceptional amounts of precious metals. The latter part of the 1860’s saw annual production of three to four million dollars from the mines around Silver City.

Silver City was thriving during this period. The Owyhee County courthouse was built in 1867. By 1869, the town supported two newspapers and had numerous saloons and other businesses. Telegraph service reached Silver City in 1874, making it one of the first cities in Idaho to be connected to the outside world.

Reports on the peak population of Silver City vary, but certainly it was a boom town of at least several thousand residents at its peak.

The mines of the Owyhee remained major producers for almost fifty years. Silver City continued to prosper during this time, still having around a thousand residents in 1912. That year would be the last that the mines recorded significant production and the district began decline.

Mining in the Owyhee continued after 1912 and through the depression of the 1930s but at a much smaller scale. In 1934 the Owyhee County seat was moved to Murphy. 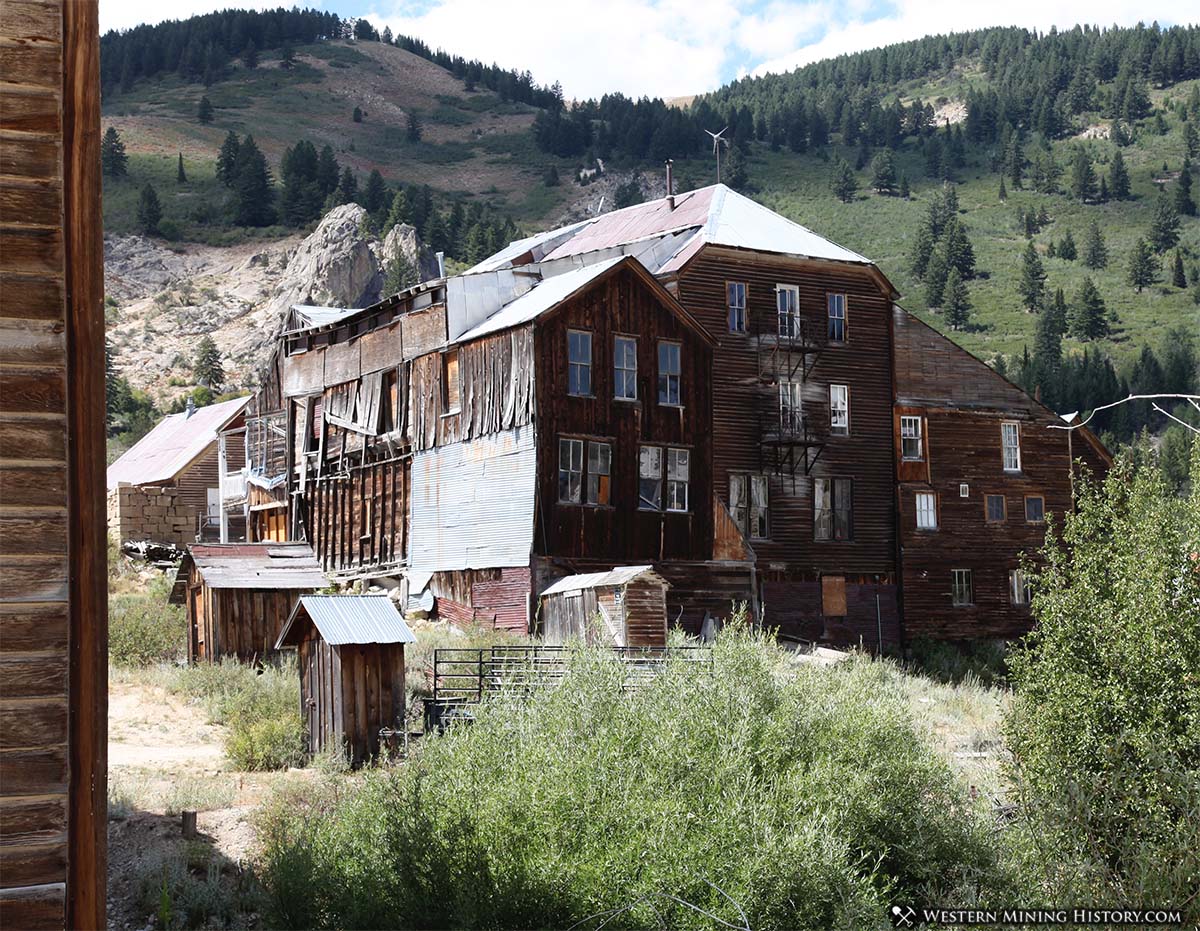 In 1972 Silver City was added to the National Register of Historic Places as a historic district over 10,000 acres in size. The Idaho Hotel, originally built in the 1860s, reopened in 1972 and is still open seasonally for guests today.

Today Silver City is an active community in the summer that is popular with explorers and tourists. The town still has over 70 historic buildings from the town's mining boom years.

Click here to view over 80 photos of Silver City, Idaho