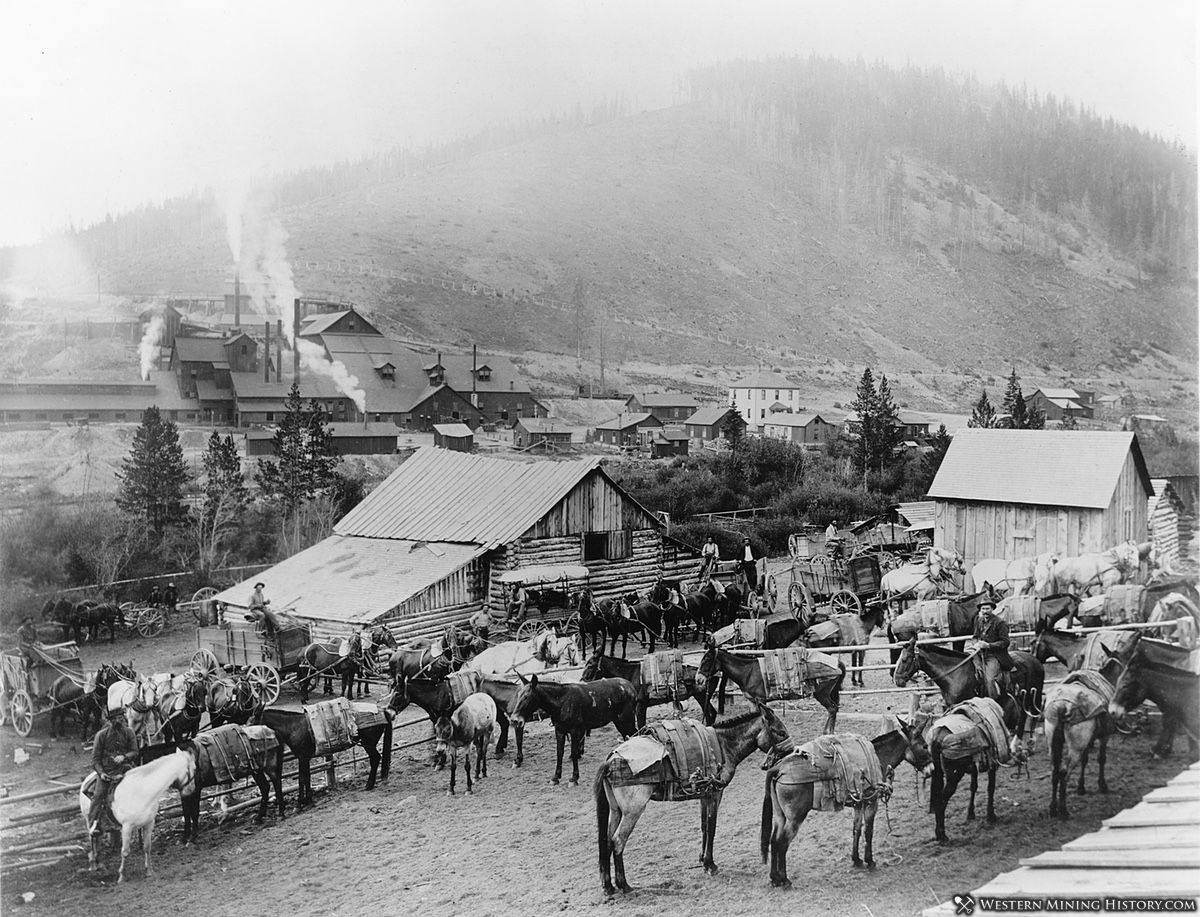 The following history of Pony and surrounding mines is quoted from the Montana DEQ website.

Folk traditions maintain that the district was discovered by a Smith McCumpsey, who was known as "Pony". The miner prospected northeast from Alder Gulch and staked a claim on the creek in 1867 and then left. He returned with a partner in 1868. A small mining camp known as Pony Gulch then arose. The camp did not survive into the 1870s.

Placers were discovered in the district in the early 1870s and lode mining began in 1874.

Jerome W. Bales and George A. Kendall first discovered gold at the Ned mine. The Willow Creek vein was uncovered by the two men a few weeks later. The Keystone was then located by William Robson. About two miles above the present town of Pony, George Moreland located the Crevice and Strawberry lodes, the latter of which lay in a patch of wild berries.

The quartz deposit was considered the motherlode of the placer ground of the district. At a depth of fourteen feet Moreland uncovered a lead, ten feet of which contained free gold worth from $20.00 to $100.00 a ton. Several other mines were located in the district and a mill was erected at the Crevice mine.

Lode mines would bring a stability to the district that placer camps lacked. The Boss Tweed was located in 1875 by Albert Mason, Thomas Carmin, Alex Lefler, William Robson and Albert Dinnock. The Clipper was staked out by W.V. Ryan, Jesse Barker, and W. H. Metcalf. The Clipper, Belle and Boss Tweed properties were later known as the Boss Tweed group. The Garnet, Eva May and White Pine mines also became active at this time.

The first quartz mill, at the Crevice mine, was built during the winter of 1875-1876 by A.H. and James A. Mallory. The mill, which originally was erected in Sterling, had five-stamps powered by water. Five additional stamps taken from the Rising Sun mill in Norwegian Gulch were later added to it. Tom Carmin then erected a second 10-stamp mill.

The spring of 1877 brought a second stampede of miners to the district and by the end of the year five more mills were in operation with a combined total of 56 stamps. Over 1,000 men moved into the district to prospect, mine and work the mills.

A better location for a permanent town was found between Pony and North Willow Creeks. In June of 1876, the new town of Pony was said to have a hotel, blacksmith shop, and several miner's cabin. Sixteen months later the town contained three stores, two blacksmith shops, three hotels, a post office, three saloons, two livery stables and a population of 250 living in 80 houses.

The cause for the growth can be found in the six quartz mills and a sawmill in its immediate vicinity. When new strikes were reported in Glendale, Philipsburg and other locations, Pony emptied out almost overnight. By 1878 the population dwindled to a few hundred.

Despite the lull in active mining, interest remained high and several large companies bought Pony properties. Henry Elling and William W. Morris, two leading citizens of Virginia City bought the Boss Tweed-Clipper mines in 1880 from which $5,000,000 was later recovered. In 1882, Morris bought the Strawberry, Willow Creek and Ned mines. In 1883, Henry Elling erected a stone 20-stamp mill. In 1884 Morris bought half interest in the mill, which thereafter was known as the Elling-Morris stone mill. This mill ran to capacity on ore from the Boss Tweed and Keystone mines. No ore which ran less than $25.00 a ton was handled.

Both the Boss Tweed and the Clipper mines were active throughout the 1890s. Elling died in 1900, and the same year the properties were sold outright in combination with the Bell, Eclipse, Charity, and Summit, to a Boston syndicate for $600,000.

The Pony Gold Mining Company was held by such Montana noteworthies as ex-governor Samuel T. Hauser, and Anton M. Holter of Helena. The company bought into several properties owned by Elling and Morris, including the Strawberry, the Boss Tweed, and Clipper. The operation of the mines was then modernized using compressors and air drills. Due to mismanagement, the mines operated under the new company for only a short time.

While the Pony Gold Mining Company was active, it attracted the interest of the Northern Pacific Railway. Hauser persuaded the railroad to build a 16 mile spur from Sappington on the Jefferson River to Pony. The town received its rail service in the spring of 1890. This brought on a small boom as mines began to ship low-grade ores to smelters in Butte, Anaconda and East Helena. By 1895 the town had swollen to a population of about 500 with school enrollment of 108.

In 1900, John Cowan came to Pony representing Butte investors and began developing Mineral Hill properties. Cowan leased the Strawberry and purchased the Old Joe. The company erected a 10-stamp mill on the creek near the Strawberry mine. The mill was said to have originally been at the Columbia mine in the Pipestone district. The mill was operational by fall of 1900, but the mine and mill reverted to W. W. Morris in 1903.

The largest mill in the district was the 100 stamp mill at the Boss Tweed / Clipper group. This property was sold in 1901 by W. W. Morris and the Elling Estate to the Indian Mining Co. About this time, the giant mill was erected a quarter mile west of Pony above North Willow Creek. The railroad extended a spur to the mill. A Pelton-wheel hydro-plant was constructed to power the machinery. The mill never operated and the town of Pony began to decline.

A small mill was built on Charcoal Creek in 1903 on the Mable millsite. The mill was said at the time to be the highest mill in Madison County. The mill processed ores from the Oregon mine.

The district remained an active mining area until the 1930s. This district, together with Potosi, Mammoth, and Bismark districts a short distance to the south and west, yielded a total of $6,430,2336, mainly in gold but also in appreciable amounts of silver, copper, and lead.