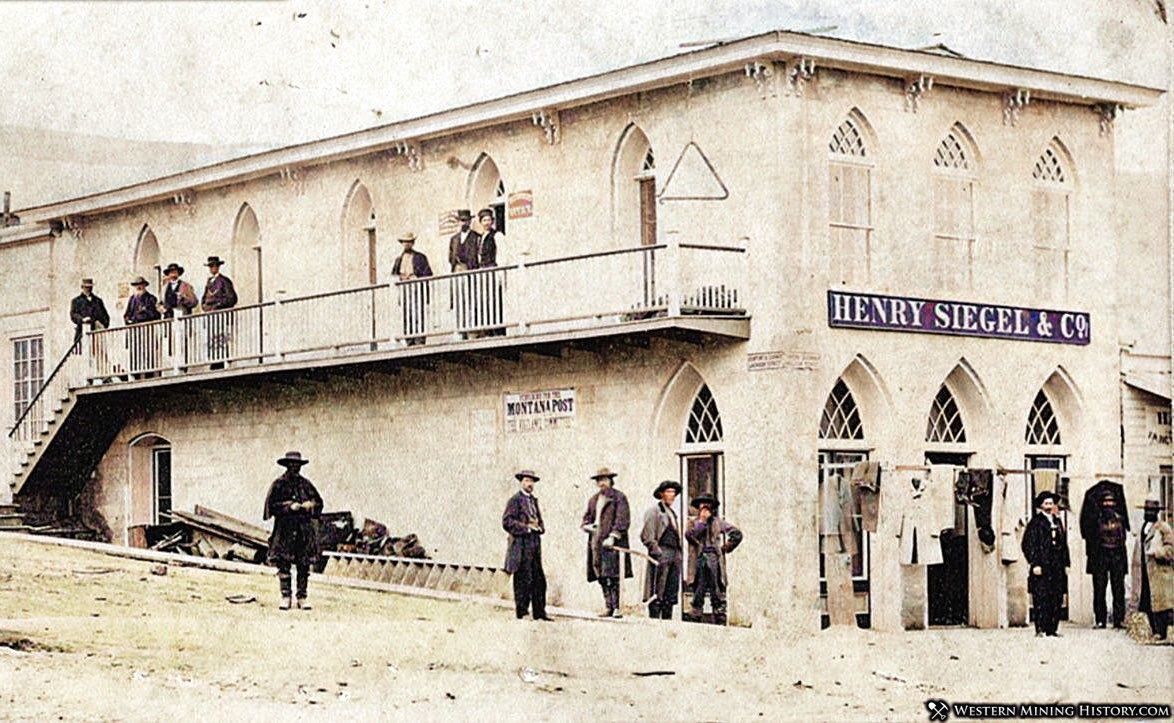 Virginia City is the center of one of America's richest gold mining areas. The mining districts of Alder Gulch produced and estimated $50 million in gold, although some historians believe that number is too low and place the total value at around $150 million.

The spectacular gold deposit discovered in Alder Gulch on May 26, 1863, led to the rapid growth of this legendary gold camp. Thousands of fortune-seekers rushed to the area, and by 1864 the Virginia City area boasted an estimated 10,000 residents.

Virginia City was known as a particularly lawless and violent town in its early days. Road agents became notorious for robbing and murdering travelers in the area, resulting in up to 100 deaths in the period from 1863 to 1864. The situation culminated in the formation of the famous Montana Vigilantes. The vigilantes hung an estimated 15 road agents, including Henry Plummer, the sheriff of Bannack and alleged leader of the road agent gang. 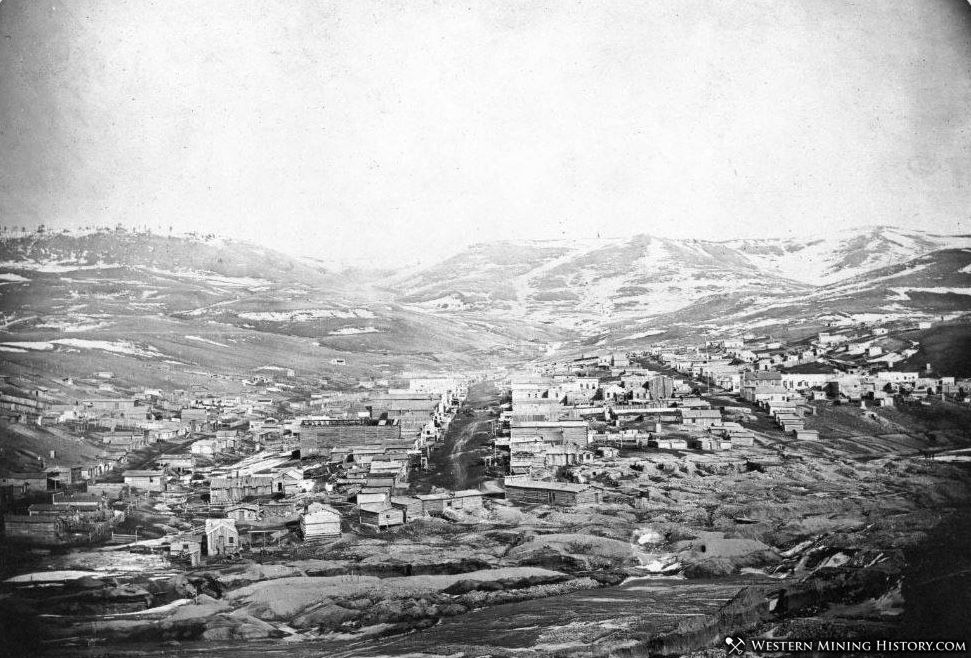 After the creation of the Territory of Montana, Virginia City became the territorial capital, 1865-1875, and the Madison County Seat.

The richest gold placers were mined out in the first five years after discovery. An estimated $30-$40 million in gold was recovered during this period. Chinese leasers then reworked many of the mines and retrieved a lot of gold that was previously missed. White miners also continued operations in the gulch until around 1887, although at a much smaller scale than during the initial boom years. A more complete history of placer mining in Alder Gulch is included below.

The first dredge went into operation in 1899, and dredging helped the local gold mining industry thrive for the next two decades. An estimated $9 million in gold was recovered by dredging between 1899 and 1922.

Lode mining in the district started shortly after discovery in 1864. Five mills were in operation that year. The deposits were shallow however and by the mid-1870s the shallow ores that were relatively easy to mine and mill were exhausted. Later more complex ores were mined and processed with cyanide. Lode mining continued into the 1930s and although some of the mines produced rich ore, the lode mines never produced the same spectacular wealth that came out of the placer mines.

Among the first to recognize the historical and architectural significance of Virginia City were Charlie and Sue Bovey of Great Falls. They began to purchase and stabilize some of the fragile buildings in the early 1940s. The Bovey's personal efforts and those of their son, Ford, resulted in the town's designation as a National Historic Landmark and its remarkable preservation as one of the most intact gold rush towns in the West. 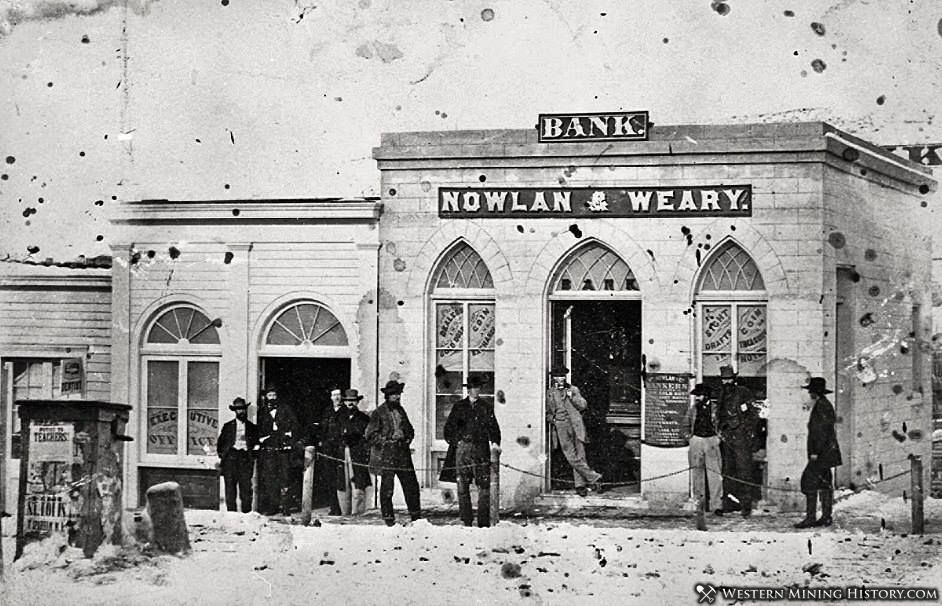 Extent of the Settlements on Alder Gulch

The following text from the Montana DEQ's historical documents describe the early settlements on Alder Gulch.

The first discovery of placer gold in Alder Gulch occurred on May 22, 1863, when a small group of prospectors, including William Fairweather, Henry Edgar and Barney Hughes, panned the creek while on their way back to Bannack. The party had discovered what would become the richest placer strike in the history of the Montana Territory.

The prospectors, however, had lost most of their supplies in an encounter with the Crow Indians and had to return to Bannack following the initial strike. They tried to keep the discovery a secret, but word inevitably got out and a horde of some 200 men followed them back to Alder Gulch. As word of the rich diggings along Alder Gulch became known, there was a general exodus from Bannack where the placer workings were starting to play out. 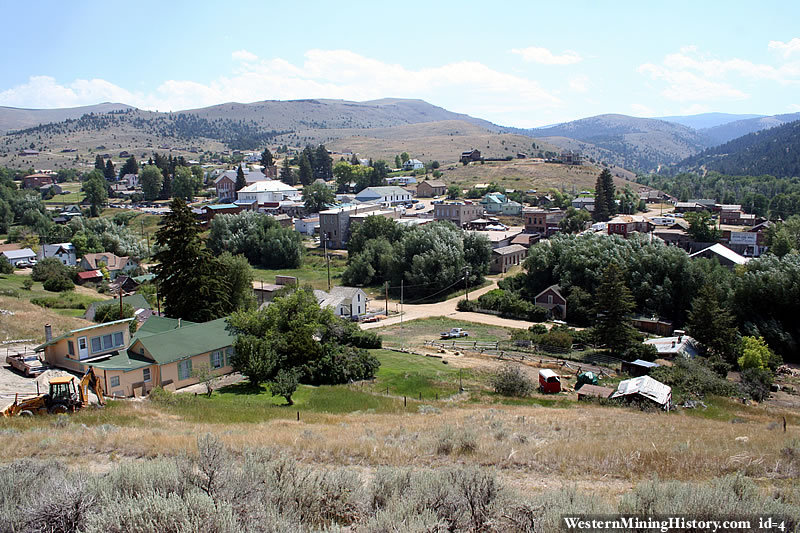 Miners swarmed up and down Alder Gulch and within a year the population would swell to an estimated 10,000 people, and the Virginia City mining district and its sub-districts were established. Settlements were established along the gulch with Alder at the mouth, Summit at the head, Virginia City in the middle and Adobetown, Central City, Junction and Nevada City scattered in between resulting in a rambling, ramshackle continuous settlement extending up and down the gulch for 14 miles. For this reason the early settlement was also known as Fourteen-mile City.

The area around the initial strike was organized as the Fairweather placer district on June 6, 1863, the same day Fairweather's group, and the mob of following miners, arrived back in the gulch. Other meetings followed which adopted mining laws, set up a miner's court, elected officials and created other mining districts.

By the end of 1864 all of Alder Gulch was staked with placer mining claims and divided into placer mining districts. These districts were based primarily on the potential of the placer gravels although they also included lode claims. The Fairweather district was located in the center of the gulch. Above the Fairweather was the Pine Grove district and above it, at the head of the gulch, was the Summit district.

Extending down the gulch from the discovery site were the Nevada and Junction districts. Located south of Nevada City, was the Browns Gulch district in the gulch of the same name. The Granite district was established along Granite Creek, about two miles northwest of Nevada City. The Highland, Barton Gulch, and Williams Gulch districts were added later to what became the overall Virginia City mining district 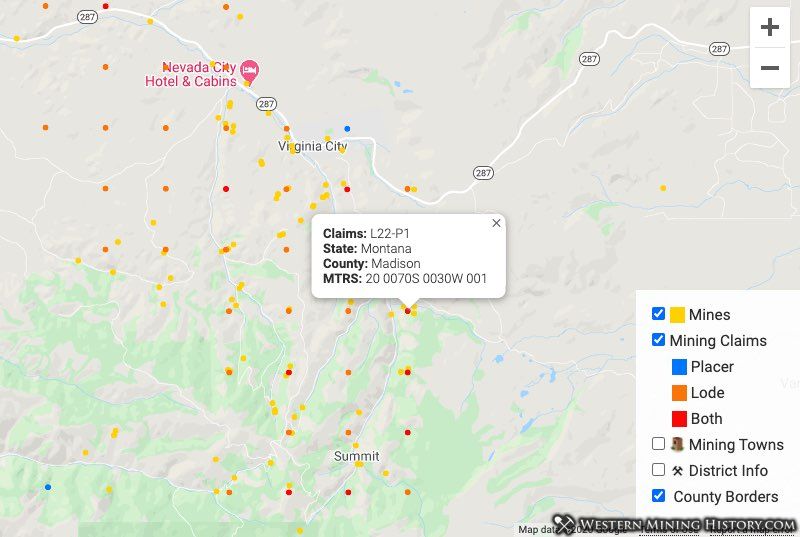 This screen capture from the WMH Mines Explorer Pro illustrates the distribution of historical gold mines and modern mining claims around Virginia City. As the image illustrates, the ground in this historic district is still heavily claimed

Chinese miners leased many of the original claims and methodically worked over the mined areas, recovering considerable amounts of gold missed by the early placer miners. White placer miners also continued to work the gulch until as late as 1887. An additional $10,000,000 worth of gold was taken from the gulch during this period.

Placer mining can only work relatively shallow deposits and many mining experts realized there was undoubtedly a large amount of gold still to be found along the gulch. The only feasible way to get the remaining gold would be with floating dredges. 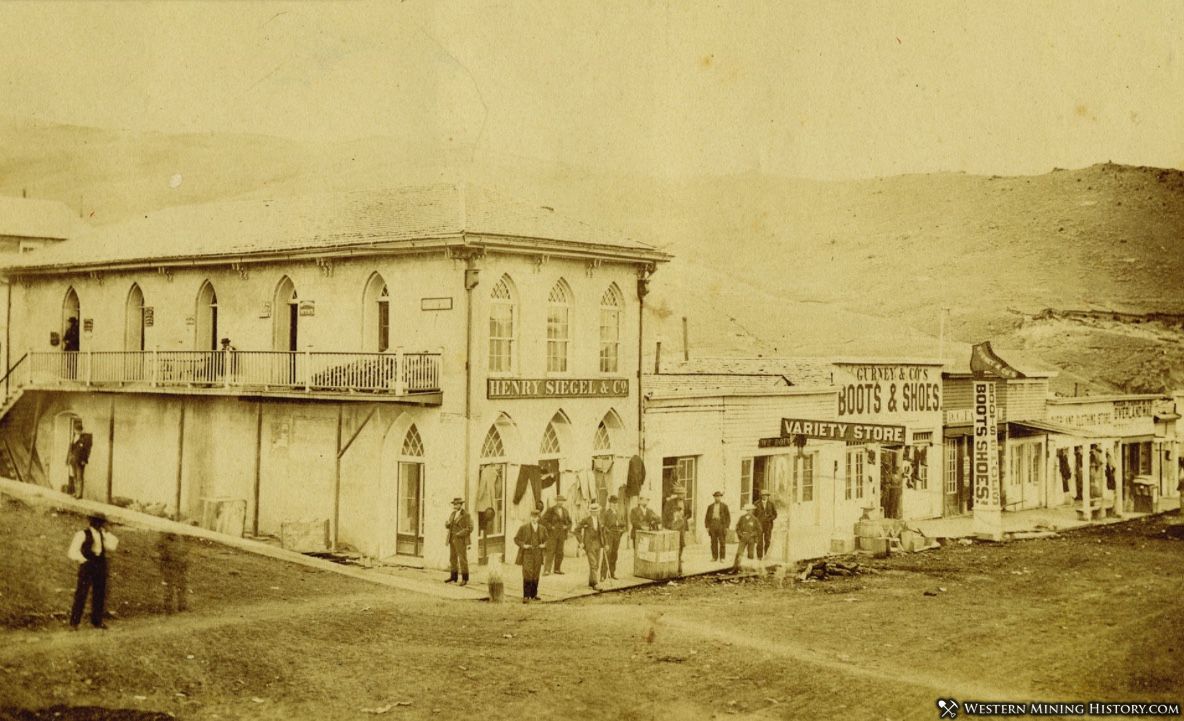 In 1896, the second period of placer mining began when the Conrey Placer Mining Company was organized to dredge the gulch. The company bought up placer ground along the gulch as well as a number of ranches below the mouth of the gulch. The first dredge went into operation in 1899. Ultimately, six dredges were constructed which, during the next 24 years, processed over 37 million cubic yards of ground along a seven-mile long stretch of bottom land from Virginia City to Alder.

The Conrey company's most productive year was in 1915 when it had four electric dredges working at once. They processed some six million cubic yards of gravel, recovering more than $800,000 in gold. By the first part of 1922 the company decided that all the dredgeable ground was exhausted and it closed down the operation.

The company's two decades of dredging the seven miles of Alder Gulch were profitable ones with a total of $9,000,000 worth of gold being recovered. Shortly after the dredges were shut down, most were disassembled and the equipment sold for scrap while the heavy wooden barges were left to slowly rot away in their dredge ponds 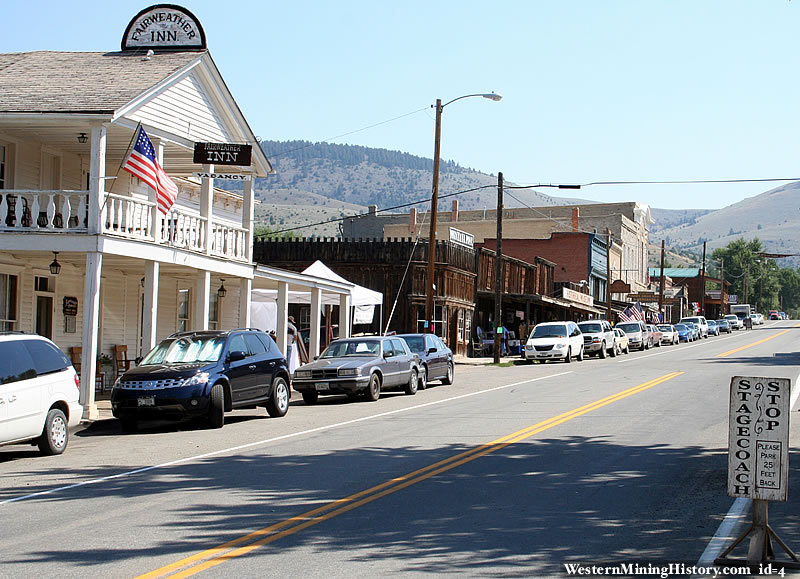 Although small pockets of gold little mining has been undertaken since the early 1940's, there has been continuous exploration for high grade lode deposits and bulk tonnage low grade gold deposits.