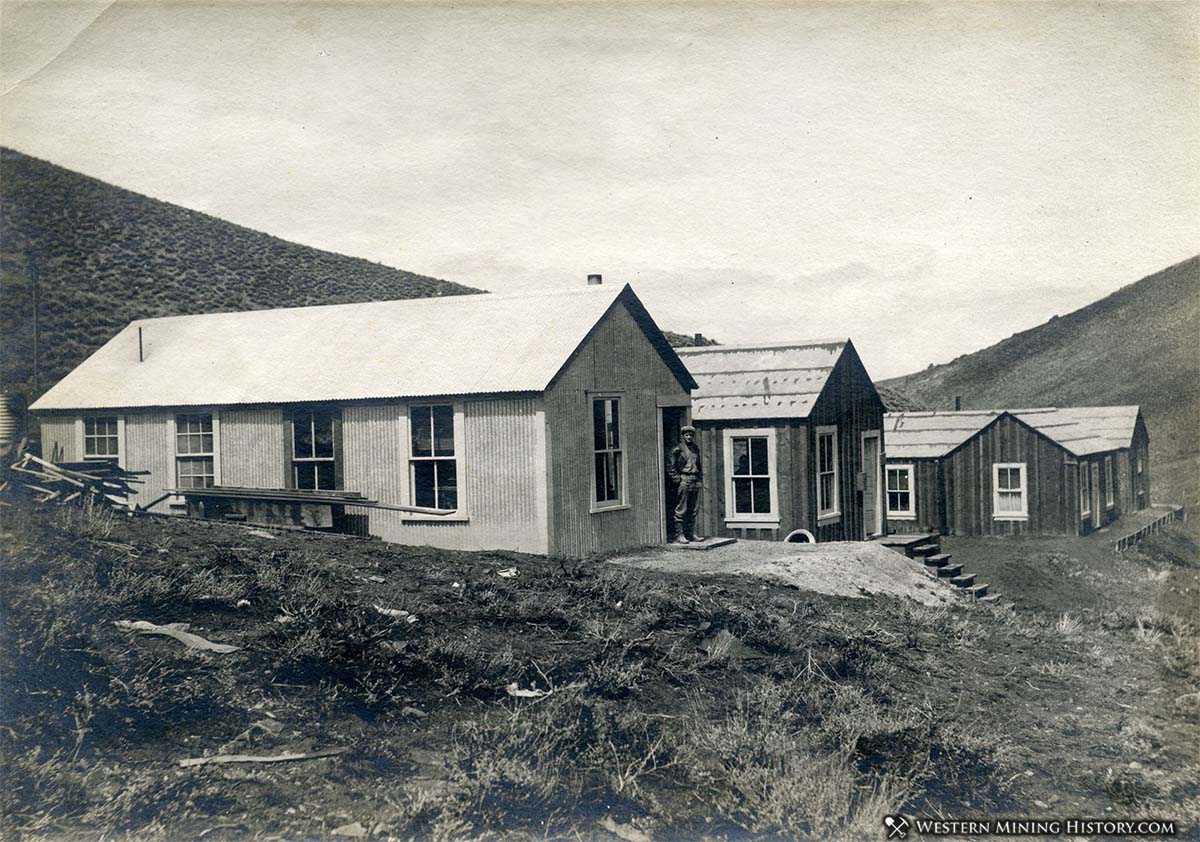 Hilltop had a post office 1909-1931. The town was originally called Kimberly, but it is likely that the name was changed to Hilltop when an application for a post office was made as there was already a Kimberly in White Pine County.

Although the mining camp of Kimberly was established at this site in 1906, a previous settlement called Marble City served as a watering hole for travelers during the 1860s, and apparently some mining had occurred but at a small scale. It is unclear how long that earlier settlement lasted. 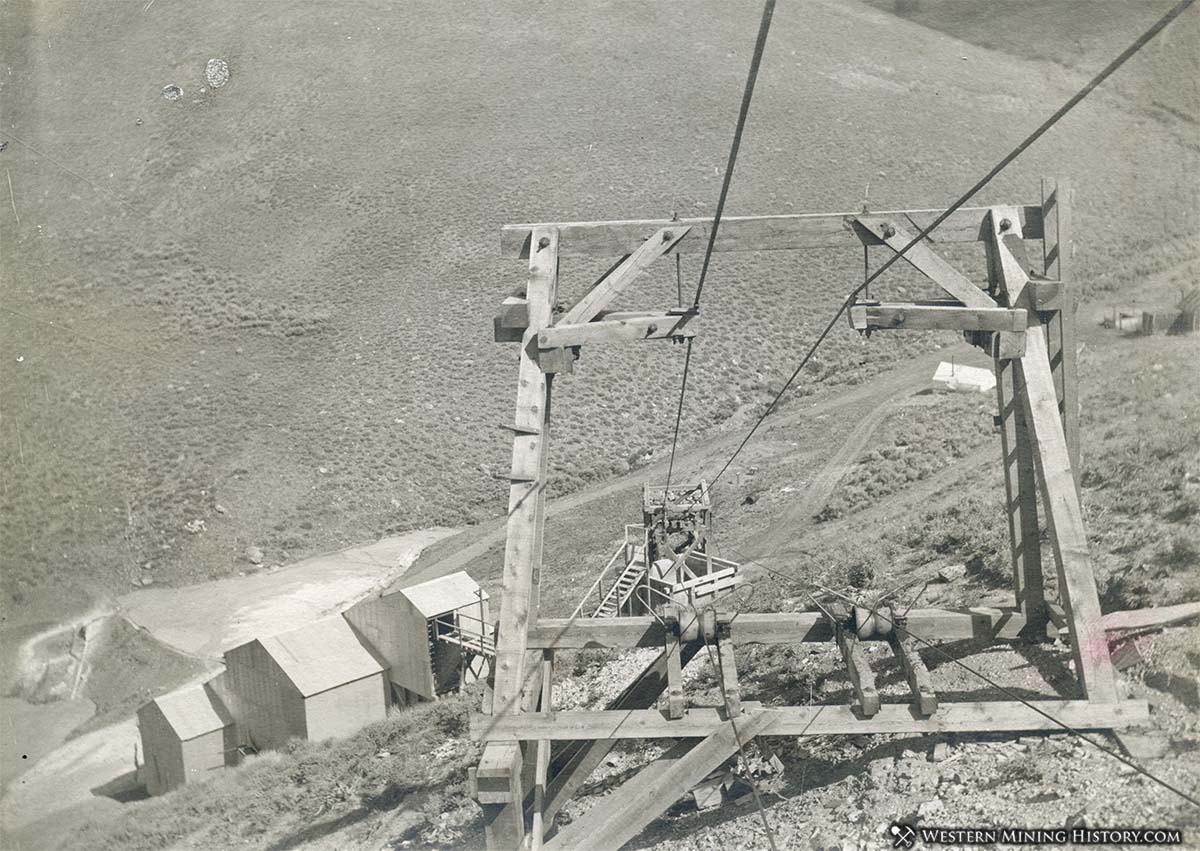 New ore discoveries were made near the old workings starting in 1907. By 1910 the town of Hilltop had a hotel, saloons, and other commercial businesses. The weekly newspaper Kimberly News was published here.

As automobiles became more common, most of the businesses in Hilltop moved to Battle Mountain. The Hilltop Nevada Mining Co. built a new mill in the 1920s which operated for around three years. The mines ultimately closed and the post office was removed in 1931.

A USGS report summarizes production at Hilltop: "Production of the district from 1909 through 1959 was 119 ounces of placer gold and 17,834 ounces of lode gold. Considerable quantities of silver and small amounts of lead and copper were produced. " 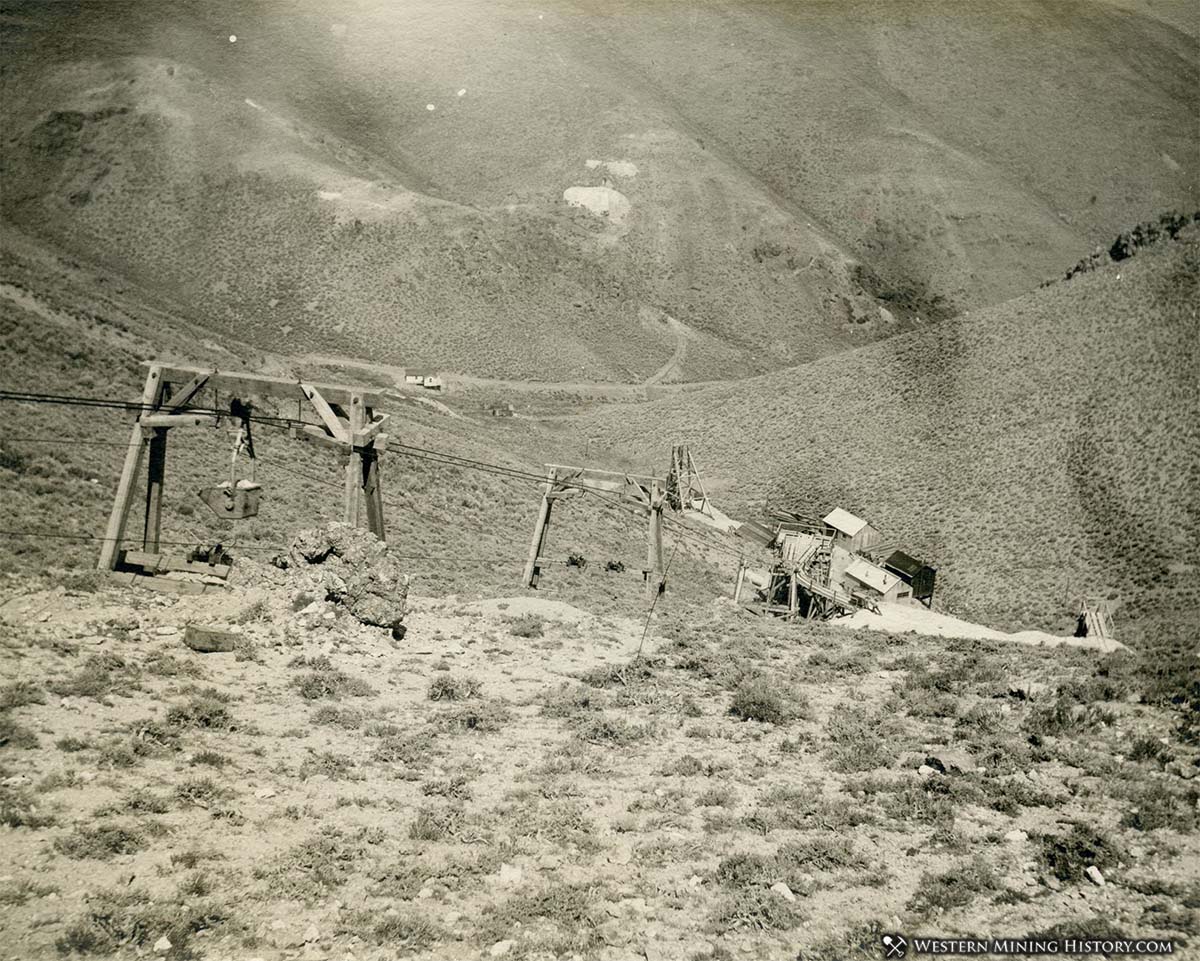 Mine and tram at Hilltop, Nevada

The April 2nd, 1910 edition of Mining and Scientific Press reported on the progress at Hilltop. The following text is from that article.

The mining camp of Kimberly which has sprung into prominence in the last few months, is in the Battle Mountain district. This district is receiving considerable attention on account of favorable showings of copper, lead, gold, and silver ores, the result of development work carried on consistently for many years. The presence of iron ores and limestone in addition to the copper ores offers favorable conditions for smelting.

There have been small but steady shipments of carload lots of gold and silver ores to the Utah and California smelters. However, it remained for the discovery of Bannock with its rich free-gold ores on the very surface to attract marked attention to the district. Bannock has settled down to solving the question of the depth and nature of its ore deposits, and attention is now centering upon the camp of Kimberly. 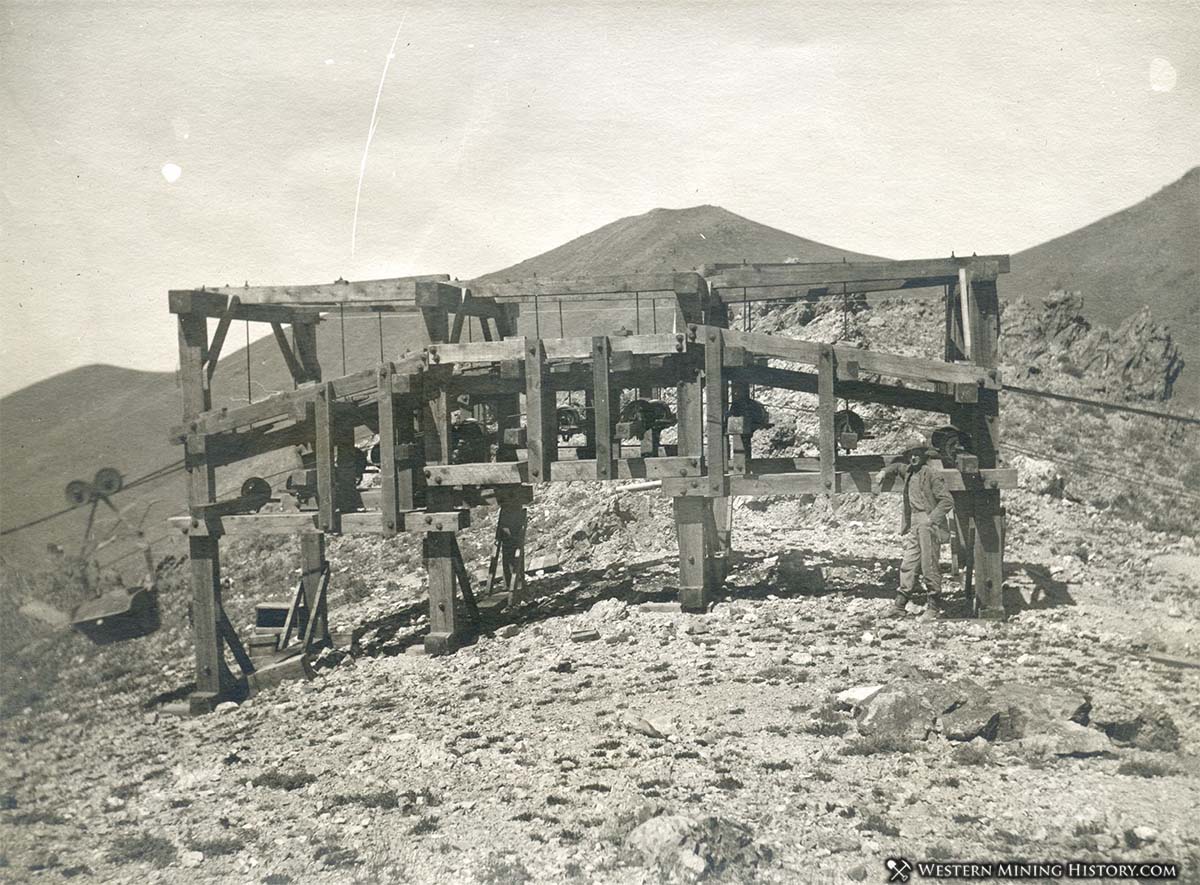 Kimberly is 18 miles southeast of Battle Mountain, 10 miles of this distance being over valley road and the last 8 being a steady climb up a winding canyon. The camp, consisting of several large frame buildings, cottages, and tent-houses, lies at the intersection of two gulches at an elevation of 6500 ft., while the mine workings are along the crest of the ridge to the west, and 300 to 400 ft. higher.

For years the few prospectors' huts at this convenient watering place on the country road were known as Marble City. An abandoned stone hut and a 10-ft. inclined shaft dates back of the memory of any local resident. perhaps back to the days when the wealth of Austin allured the prospector to the mountains of Lander county, for the ore in the incline shows a high lead-content and a high ratio of gold to silver, while the free-gold surface-showings were evidently undiscovered. 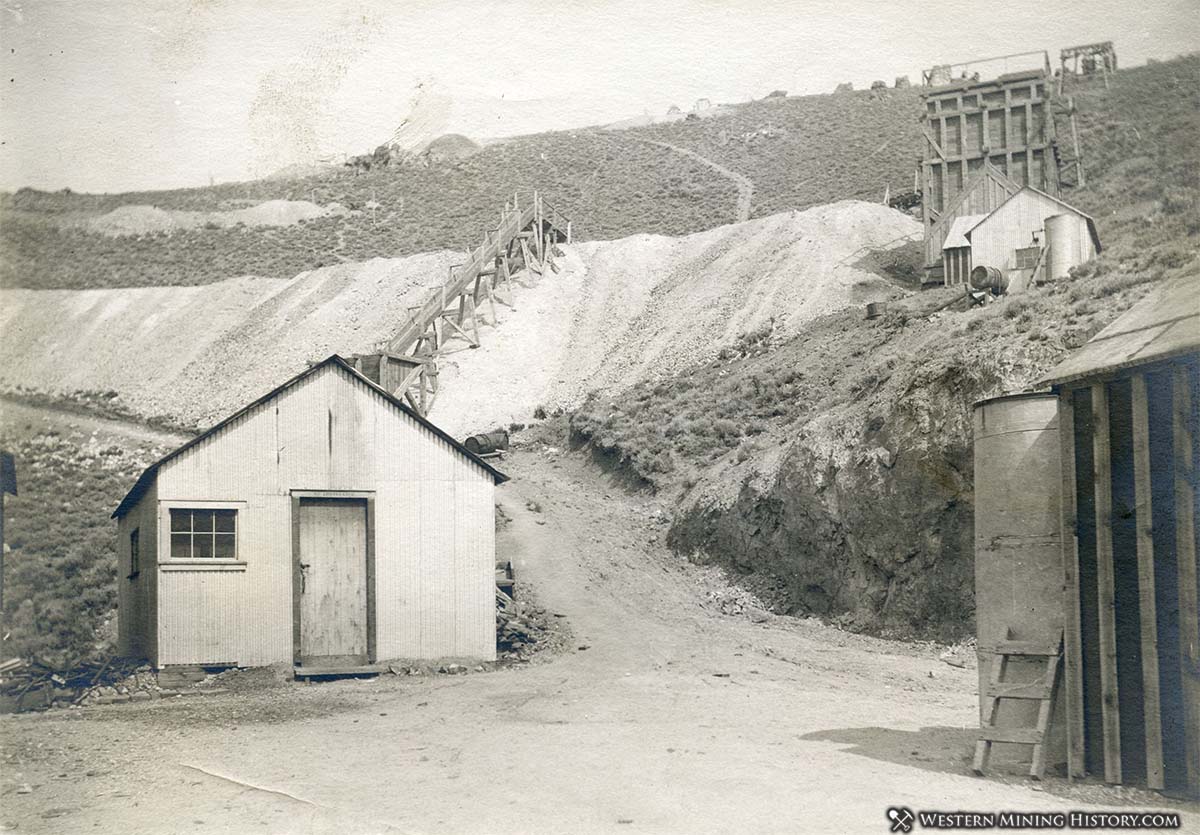 Mine Buildings at Hilltop ca. 1920s

In 1907 prospectors encouraged by the surface 'pannings', discovered wire-gold in places not over 300 ft. from the old shaft. Other discoveries along the crest followed, and in 1908 the camp had a lively boom, being known as Hilltop. Although 1908 was a dull year, the control of the stock in the two main companies was quickly placed under option at fancy figures. On both properties development was limited to the main discoveries.

On the Hilltop property a large open-cut was made in following the gold stringers, and exceedingly rich ore was shipped in small lots. A tunnel at a depth of 70 ft. failed to find rich ore, and the option was dropped. On the Independence claim of the Philadelphia Western Mining Co.'s ground an incline shaft following the vein was sunk 180 ft., connecting with a 265-ft. tunnel. From this work about $15,000 in rich shipping-ore was taken from one lease. However, the promoters lost their option through holding for too high a figure. These failures caused the camp to recede from public notice. 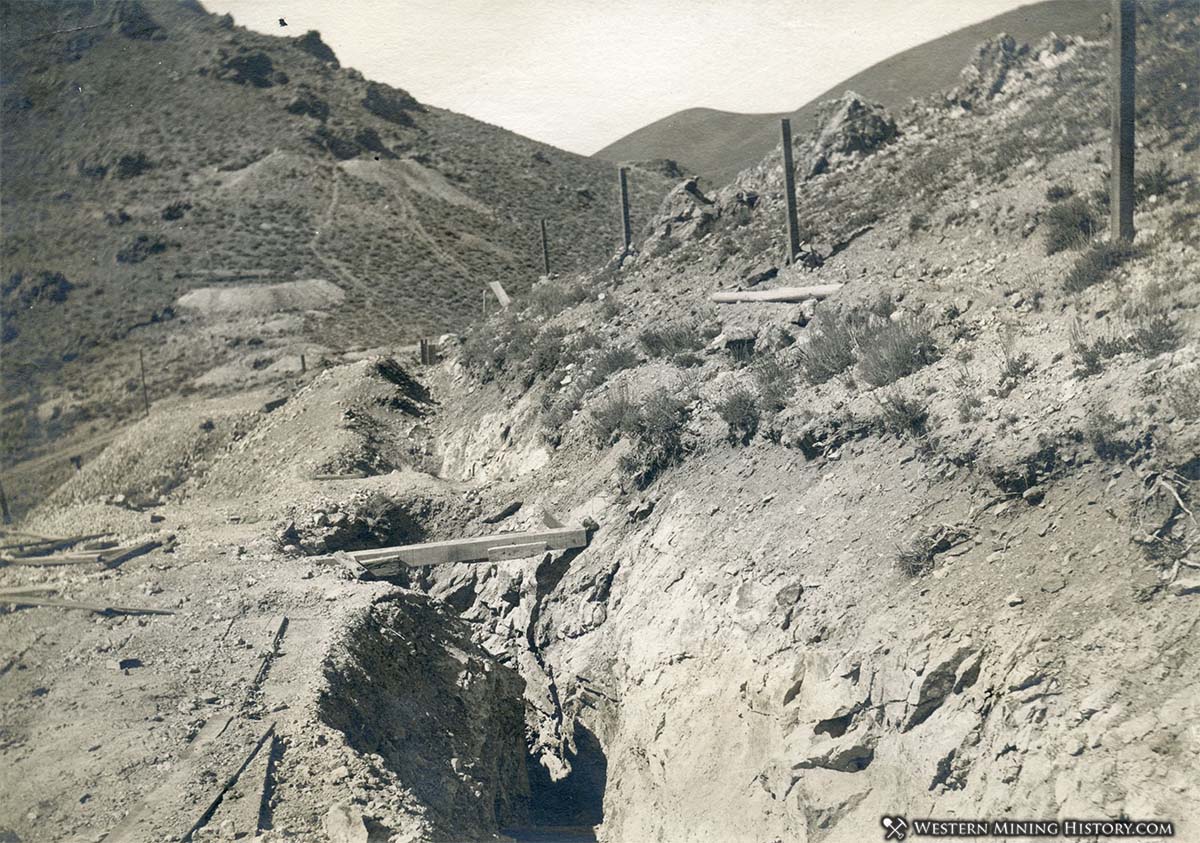 The owners, able to keep but a few miners at work, divided their ground into lease-blocks, and many of the men went from day's pay to leasing, attracted by the surface-showings. When a miner can guide his work by a few minutes with mortar, pestle, and pan, and a few encouraging colors are found, his energy is unrelenting and his faith unbounded. It is the showing made by these lessees that has brought the camp again to public notice.

The mill-site is a half mile west of the town in a gulch between the Hilltop ridge and the Golden Rule claim. Water for milling is to be obtained by pumping from Indian creek some 3000 ft. down the gulch. The 20 stamps are to be followed by amalgamating plates, and concentrating tables. The ore will readily yield 90% by this treatment, over 80% being obtained by amalgamation. Cyanidation of the tailing will hardly be attempted on account of the probable low value and a small copper content.

The building of the mill and the short life left to the leases have stimulated work, and the camp has a thriving appearance.