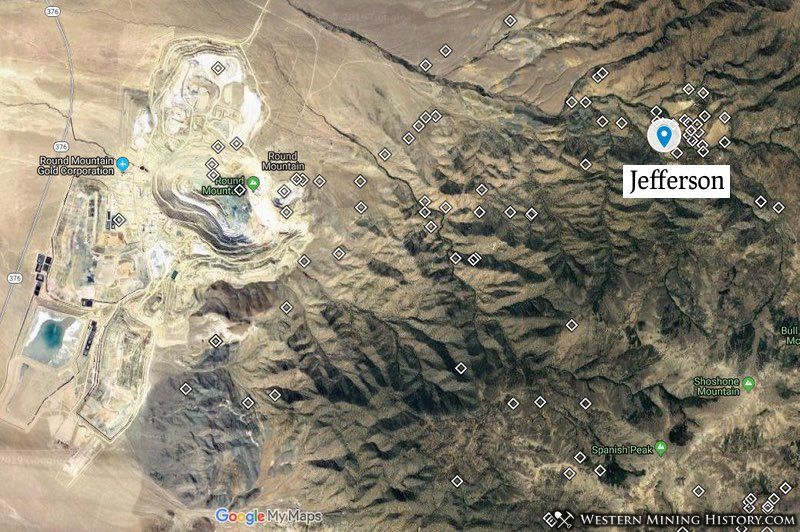 Jefferson's post office was established in 1874 and closed down in 1886.

Modern explorers report that Jefferson is a great ghost town to explore with many old stone and adobe buildings and extensive mine ruins and equipment.

The 1951 publication Mineral Resources of Nye County, Nevada by the Nevada State Bureau of Mines gives the following history of the Jefferson district:

The Jefferson Canyon mining district lies in Jefferson Canyon about 6 miles northeast of Round Mountain on the west slope of the Toquima Range. The Kanrohat mine, more recently referred to as the Jefferson, is situated at an elevation of 6,700 feet. Roads in the area are generally fair to poor. Water is plentiful for any ordinary mining and milling use.

Lincoln states that the district was discovered in 1866 but did not become active until 1871 when a test lot of ore was shipped to Austin. The two principal producing mines, the original Jefferson and the Prussian, are apparently on the same vein which strikes northwest and dips steeply to the northeast. The original Jefferson, or South Prussian, is at the southeast end of the lode; the Prussian is at the northwest end. Both properties have had mills.

The property in Jefferson Canyon, now commonly referred to as the Jefferson mine, is not the original Jefferson. As mentioned by Lincoln, this property was discovered in 1873 by C. J. Kanrohat and was known as the Sierra Nevada; it has had a very meager production.