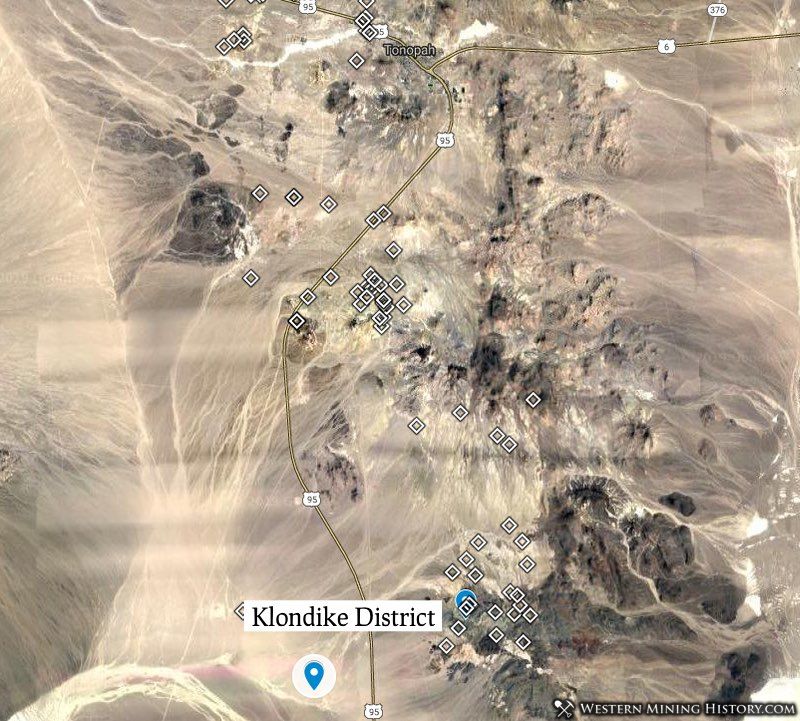 The image at the top of the page illustrates the Klondike district's location approximately 14 miles south of Tonopah. Diamond shape markers are the mines of the district.

I have not been able to locate any historical photos of this settlement.

The 1936 publication Placer Mining in Nevada by the Nevada State Bureau of Mines gives the following description of the Klondike District:

The Klondyke District is 14 miles south of Tonopah in the southern Klondyke hills in east Esmeralda County, near the Nye County border. The lode deposits in the district were discovered by Court and Bell in 1899, but it is said that some Chinese placer miners were active in the District in the middle seventies. For several years following the discovery of the lode deposits, some placer mining was carried on by dry-washing methods. One nugget valued at $1,200 is reported to have been found. In general, the results of the placer mining were not very profitable; in recent years there has been no placer mining in the District.

The Bell and Court mine, named after the discoverers of the district, is listed in the USGS MRDS database of mines.

Klondike is the camp that Jim Butler was headed to when he made his famous silver discovery at Tonopah. Klondike was never a major producer, so it's place in history remains a footnote in the fabulous history of the Tonopah mines.

In a 1969 University of Reno graduate thesis on the geology of the Klondike district (by Eddie Ray Chipp), includes some information on the camp's history:

Mr. J. T. Butler in 1900, was on his way to Klondike when he discovered the silver deposits at Tonopah. Butler gave the assayer at Klondike a sample of the Tonopah rock to be assayed. The assayer, Mr. Frank Hicks threw the sample away as seemingly not worthy of assaying. It is stated in the story of Diamondfield Jack,by David H. Grover, that Diamondfield Jack founded the camp of Klondike.

The Klondike, area has 5 cabins remaining in the main mining area and a few others nearby. Four miles southwest at Klondike station, a water well serviced the Tonopah and Goldfield railway as well as furnished water to the residents at Klondike. Ball in 1904 (1907, p. 25) stated "travelers can find accommodations for man and beast at Klondike well."

Most of the mining activity was in the years prior to 1905, from 1908 to 1910, and 1912 to 1925. After 1925, a few sporadic attempts report minor production. The original claims by Court and Bell in the southern part of the main mining area, were the most productive. The original Klondike Divide Mining Company owned the property in 1911, and probably through the early 1920s. It was mostly operated by leasers.

The Marionette Mining and Milling Company patented claims in the east Klondike mining area, and the Knox Divide Mining Company operated or leased the northern part of the main mining area in the early 1920s. Many other small companies operated in the area using the names Divide or Klondike in one way or another. The Klondike mines may well have supplied the necessary grubstakes for part of the prospecting done in the Divide district.

Chipp reports that as of 1969, the main camp at Klondike had five remaining cabins. I can't find any mention of remaining structures today. 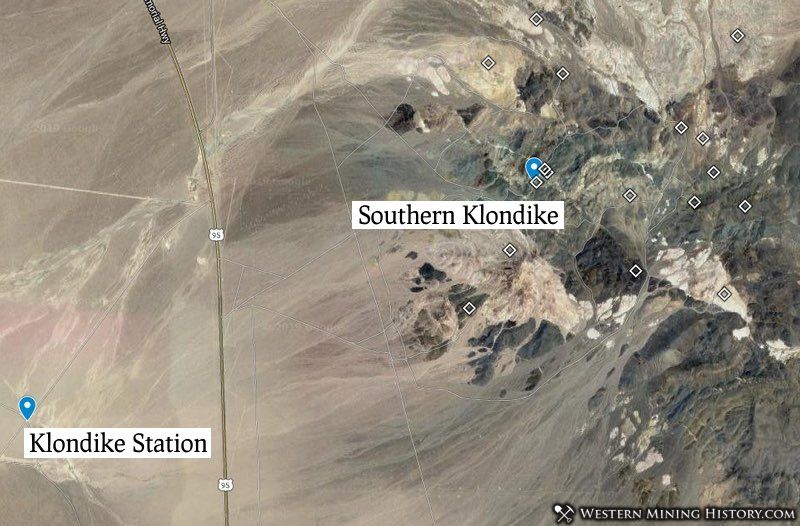