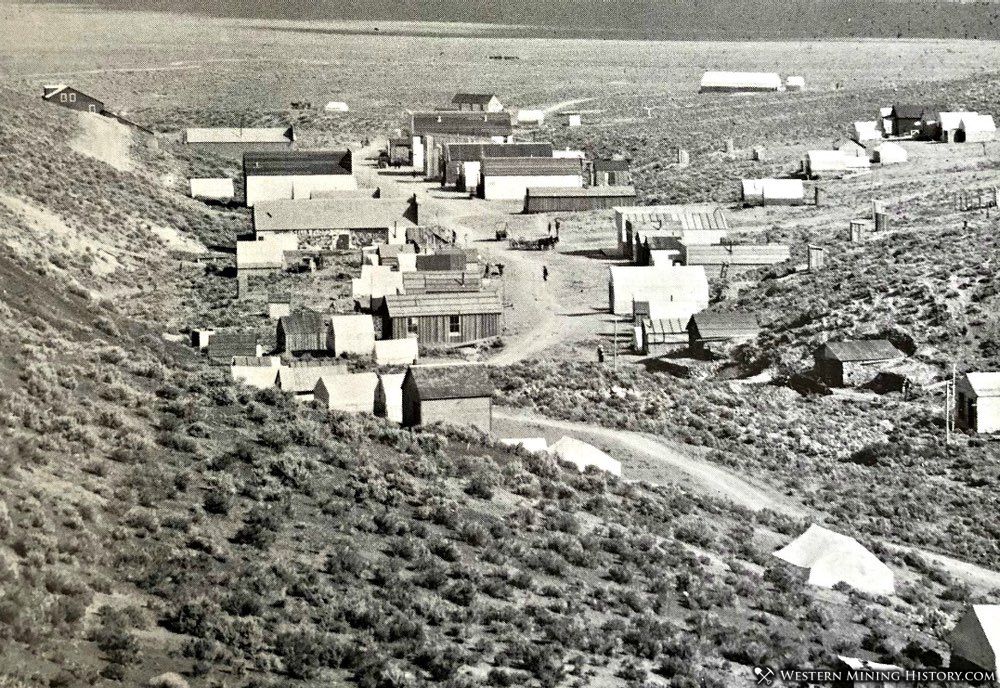 Mazuma is one of four towns that were settled during the 1907 rush to the Seven Troughs mining district. Mazuma was the site of at least two stamp mills for treating the district ores.

Mazuma is mostly known for the devastating flash flood that hit the town on July 12, 1912. A twenty foot wall of water, the result of cloudbursts in the nearby mountains, completely destroyed the town and killed at least 12 people.

In 1908 the publication Mining Investor profiled Mazuma and named the town "the central town in the district" and ironically made the statement that Mazuma was in "an excellent location, being at the mouth of Seven Troughs canon". The full text of that article is included here:

"There are four towns in the Seven Troughs district all of which have excellent mining territory adjacent to them. Mazuma located in the central portion of the district not only has the mines, but also has the lead as the stopping place and metropolis of the district. Mazuma was located early in 1907 and for a time its success was indifferent. In the fall of 1907 It began to be a general headquarters and at the time of the visit of the writer in June of this year, was the recognized center and stopping place for transients."

"This is due partially to its central location and partially to the fact that the citizens of Mazuma have used every endeavor to make that town the center. They have good hotel accommodations, & good livery stable and other requisites necessary to the comfort and convenience of transients. Mazuma is the headquarters for the automobiles running in and out of the district, also the stage lines." 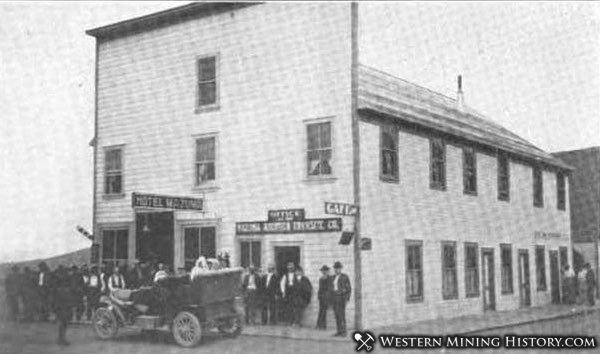 "The town has an excellent location, being at the mouth of Seven Troughs canon and should it grow to be a metropolis It has plenty of room for expanding outside of the canon. The town is supplied with plenty of pure water brought from Wild Horse canon, a distance of six miles by a gravity system which cost $25,000. Water is also supplied to the Mazuma mill which is located at the town of Mazuma. Water is already piped into most of the houses in the town."

"The town has a volunteer fire department with two hose carts and 1,000 feet of hose. At the lots in the original townsite have been sold and what is termed the cast addition has been laid out and the lots are selling rapidly. Treachard and Cary are the latest business house to start up in Mazuma, having moved there from Vernon."

"The Mazuma hotel has good accommodations for travelers and the rates are more reasonable than in the other new camps of Nevada. The citizens of the town are all loyal to its welfare. and while they believe Mazuma is first among the towns, they are ready at all times to do any. thing in their power to help the district in general."

The devastating 1912 flash flood was described in newspapers following the disaster. The following is the full text of one of these reports:

"Today the first witnesses of the flood conductions and who talked to the survivors returned to town. Among them was Drs. Russell and West, H.J. Murriah, J.T. Goodlin, H.S. Riddle, Jack and Will Borland and W.H. Copper."

"One and all they tell a thrilling story of the flood. When the water reached Mazuma,it was 20 feet high and 150 feet wide. The downpour was general in the Seven Troughs Range, in which the towns of Mazuma and Seven Troughs are located. The fact that one woman was drowned in Burnt Canyon and that Stone House Canyon was thoroughly gutted, show that the cloud burst extended over a distance of ten miles. " 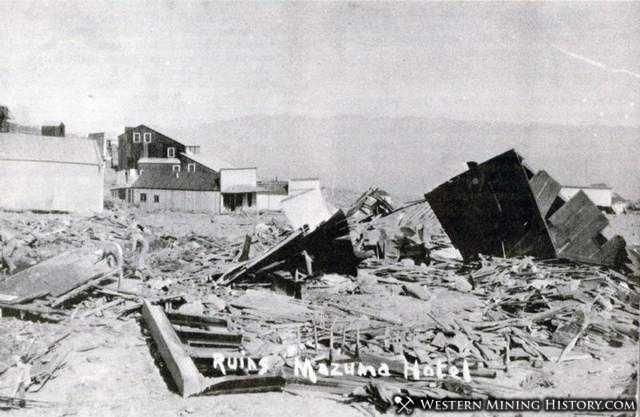 Ruin of the Mazuma Hotel after the July 1912 flash flood

"In Seven Troughs Canyon, just before the flood came, there was a heavy down pour of rain, which was followed by heavy rumbling sounds and almost complete darkness. The main of water had fallen in the drainage area of the Seven Troughs Canyon and it gradually converged into the narrow canyon walls. It reached momentous proportion and became irresistible, sweeping all before it, toying with large two story buildings as though they were chips of wood, overturning everything that came in its road. For ten minutes, it raged, a mighty torrent, while the frightened people gazed on it, helpless on the hillside."

"The only warning the people of Mazuma had that the flood was upon them was the attempt that clerk Stevens of the Preston store of Seven Troughs made to telephone Mr. Preston at Mazuma. The electrified atmosphere caused the telephone to work improperly and all that Mr. Preston could understand was the word water. It was only a few seconds later that heard the roar and beheld the flood. John Trenchard had just remarked to his wife that it looked like it was going to rain as he started for the front door of the store."

A second couldburst three weeks later sent another wall of water through the devastated town. Efforts to rebuild were abandoned, and the town of Mazuma ceased to exist.