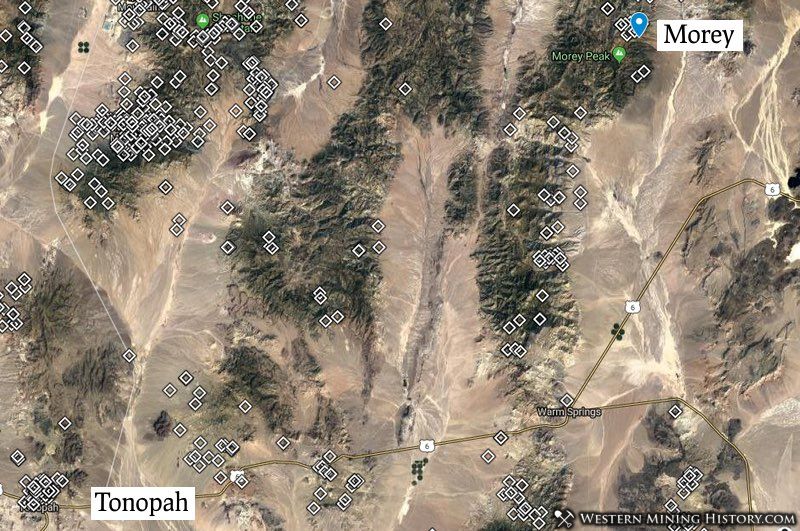 The 1951 publication Mineral Resources of Nye County, Nevada by the Nevada State Bureau of Mines gives the following history of Morey:

The Morey district is on the east flank of the Hot Creek Range, 41, miles west of Moore's Station. The district is 22 miles northwest of a point on the Tonopah-Ely highway, 75 miles northeast of Tonopah. Roads to the area are usually in fair condition.

The elevation at Morey is about 7,000 feet and snow conditions during the winter months can give some difficulty without proper equipment. Water is obtained from nearby springs and from the lower adit of the Morey workings.

Thompson and West state that the first discovery was made in 1865 by T. J. Barnes and the district was organized the next year. They report that the town of Morey was started in 1869, and in 1880 had five business houses and a population of 60.

They add that a 10-stamp mill was built in 1873, but only ran one month. The ore was then shipped to Tybo until 1880 when the mill ran for about 7 months producing about $9,000 bullion per month, Raymond (1875) reports that the mill ran only part time as it was made of old machinery that was giving trouble. In the light of the refractory character of the ore it may be that the operation also met with much metallurgical difficulty.