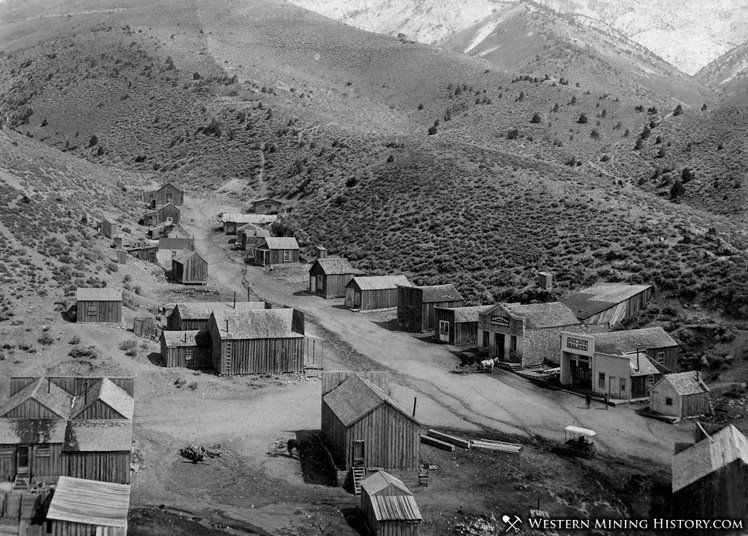 Osceola is noteworthy as Nevada's richest and longest-lasting gold placer camp. Gold lodes were first discovered in 1872, in what was said to be a belt 12 miles long and 7 miles wide. In 1877 rich placers were found in one of the area's gulches and the rush to Osceola was on.

The USGS MRDS database has a record of the activity in this district which can be viewed here.

Operating placer mines in such a dry environment was challenging, so a system of flumes and ditches 18 miles long was constructed to bring water to the mines. The flume originated on the slopes of Wheeler Peak, in what is now Great Basin National Park.

The National Park Service provides information on the history of the Osceola district and ditch, which is included here (the rest of the text on this page is quoted from the NPS website):

In 1872, prospectors James Matteson and Frank Heck discovered gold three miles west of what is now Great Basin National Park. Over the next six years, some 100 claims were staked in the quartz veins of the new Osceola mining district. The production of lodes, however, was not enough to operate the mines at a profit.

In 1877, placer gold was discovered by John Versan. The placers were located between Wet Gulch and Dry Gulch. 300 claims were placed and mining began to flourish. By 1882, the town of Osceola grew to a population of more than 1500 people. The community included several stores, a butcher and blacksmith shop, a Chinese restaurant, and two stages running regularly to Ward.

Uncovered here was almost two million dollars worth of gold, including a nugget weighing 24 pounds, which would be worth almost a quarter of a million dollars at today's prices. Though unimaginable wealth lay buried in the gravel of Dry Gulch, too little water made large scale operations impossible.

1884 to 1885, the Osceola Gravel Mining Company constructed a 16 mile ditch, known as the West Ditch, to carry the water from six creeks on the west side of the Snake Range to their placer operations. It did not meet the company's needs, however, and on September 12, 1885, the White Pine News reported that the hydraulic mines were "running very slow at present on account of the scarcity of water, only averaging about 2 hours a day".

The Osceola Gravel Mining Company began surveys in 1885 for a second waterway on the east side to be called the East Ditch. In September 1889, construction began on this 18 mile ditch to collect water from Lehman Creek and its tributaries on the east side of the range. Water rights were purchased from Absalom Lehman, who had recently discovered Lehman Cave.

Several hundred men, using hand tools, wagons, horses, and mules, worked for ten months to complete the ditch. Local sawmills produced lumber for 2.2 miles of wooden flumes and the support beams for the 633 foot long tunnel, which was blasted through a ridge near Strawberry Creek.

The Osceola Ditch was completed on July 4, 1890 at a cost of $108,223, an expensive gamble in a business where profitable yields were not guaranteed. In 1891, both ditches were being used in operations, and by June 17, the mine was running 24 hours a day. The early success of the ditches did not last long, however, and gold production did not meet expectations.

The gross yield of the Osceola Mining Company in 1890 was only $16,191, and in 1891 only $20,223. Beginning in 1892, placer mining was further hampered by water shortages caused by mild, dry winters. Water theft, leaky wood flumes, and the legal battles over water rights reduced the water supply even more. Over the next few years, mining activity fluctuated and finally, by 1905, mining activity at Osceola came to a virtual standstill.

Mining continued sporadically at Osceola over the next several decades. Production was renewed from 1936 to 1942, and again following World War II. Even today, numerous claims remain at the site, many of them re-working the tailings left by prior mining efforts. All told, Osceola has produced three and a half million dollars worth of gold.