Location
The Hammonton district is in south-central Yuba County along the lower Yuba River about 10 miles east of Marysville. It is a major dredge field that extends along the river about eight miles. It also is known as the Yuba River district.

History
The river and streams here were first worked during the gold rush by small-scale placer methods. However, this soon ceased because the river level was raised by a large influx of hydraulic mine tailings. Bucket-line dredging began in the district in 1903 under the direction of W. P. Hammon. In 1905 his interests were taken over by Yuba Consolidated Gold Fields, which had just been organized. This concern perfected large-scale bucket-line dredging here into one of the most efficient methods for mining placer gold. Yuba Dredge No. 20 was one of the largest gold dredges in existence. The district was dredged almost continuously from 1903 to 1968 and was the principal source of gold in California for some time. The estimated total output from dredging was estimated in 1964 at 4.8 million ounces.

However, operations have been gradually curtailed; in 1967 only two dredges were operating. On October 1, 1968 the last dredge was shut down, thus ending a major industry that had existed for nearly 70 years. More than a billion cubic yards of gold-bearing gravels were dredged. The extensive piles of gravel have become increasingly important as sources of aggregate. 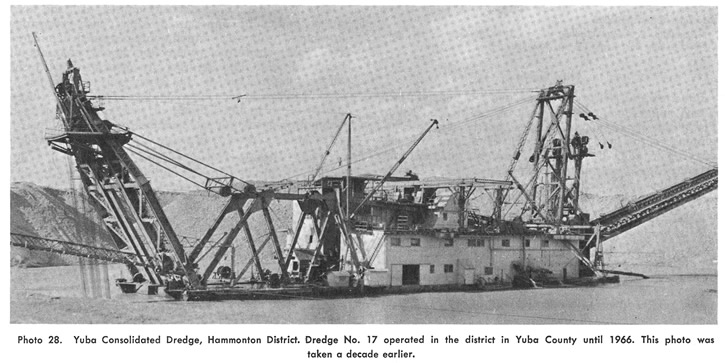 Gold-Bearing Gravels
The gold-bearing gravels arc in and south of the Yuba River, which Flows west-southwest through the area. Digging depths range from 60 to 80 feet on the upper end to 100 to 125 feet in the vicinity of the town of Hammonton. As much as 45 feet of the upper gravels are hydraulic mine tailings. Bedrock in the upper eastern end of the field consists of metamorphic rocks, while, in the central and western portions, the gravels are underlain by clay. The gold recoveries have been as follows: 12Â¢/yd in 1915-16; 14Â¢-15Â¢/yd in 1920-22; 8Â¢-9Â¢/yd in 1928-29; 12Â¢/yd in 1948-49, and 16.56Â¢/yd in 1959. The hydraulic tailings were reported to have averaged 6Â¢/yd at the old price. The gravels arc medium to fine and are free-washing. Minor amounts of platinum were recovered.

According to the April, 1960 issue of Mining World, in 1959 Yuba Cons. reported four dredges treated 16,642,265 cu. yds. with an average content of 16.561 per yard. Reserves in the area were estimated to be about 93 million cu. yds. Estimates are that about 235 million yds. of gold-bearing gravels are in the field but beyond depths of existing equipment.