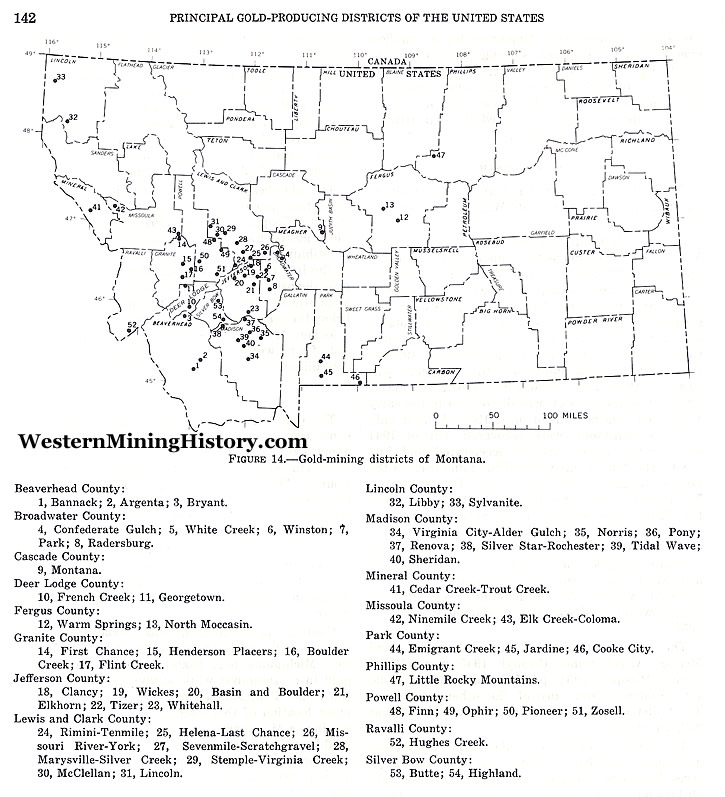 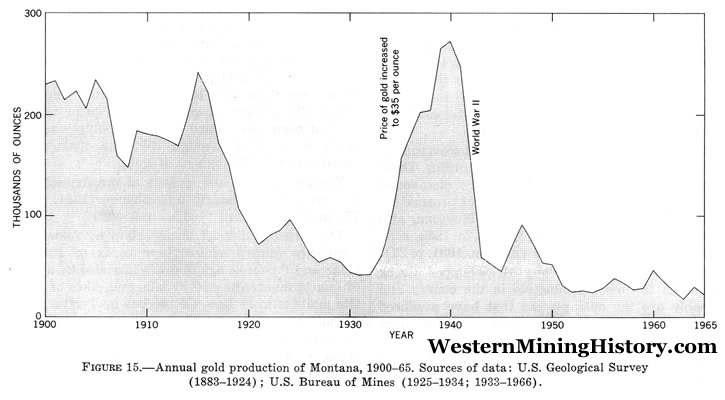 In 1852 gold was first discovered in Montana in gravels along Gold Creek in Powell County (Lyden, 1948, p. 118). The influx of prospectors, however, started with the discovery in 1862 of placers along Grasshopper Creek, near Bannack, in Beaverhead County (Winchell, 1914a, p. 18). Other discoveries, both placer and lode, came in rapid succession.

In May 1863, the very rich deposits along Alder Gulch near Virginia City in Madison County were discovered ; these proved to be the most extensive and the most productive placers in Montana.

The Last Chance placers on the present site of Helena in Lewis and Clark County, among Montana's most productive placers, were discovered in the summer of 1864 (Knopf, 1913, p. 15) as were the placers in the Butte district in Silver Bow County (Lyden, 1948, p. 144-145). These rich discoveries stimulated a rush of prospectors to Montana who searched the valleys and gulches for gold-bearing gravels. Placer mining flourished during the 1860's.

Some of the deposits were quickly worked out, but others were worked on a substantial scale up to World War II. Winchell (1914a, p. 19) described this extended activity as follows:

By the gradual installation of ditches, flumes, and hydraulic and sluicing apparatus the life of the placer-mining industry has been extended for half a century, though with decreasing yield at nearly all places, except where new and virgin ground was opened by late discovery or by bringing water upon ground previously too dry to work.

The introduction of dredges increased the annual output to about half a million dollars, though the newness of the method and the many difficulties that had to be overcome caused for a time great fluctuations in the yield. Since about the first of the century, however, the product has been large and increasing, and, despite the marked decrease in the amount of gold won by other placer methods, the annual placer production has formed an important portion of the total gold output of the State.

In 1895 dredging was first attempted in Montana on Grasshopper Creek near Bannack (Winchell, 1914a, p. 21). Dredges operated by electric power have been used since 1906. Since World War II very little placer mining has been done.

Early development of the mines was impeded by lack of an adequate transportation system. By 1870 the placers had been largely exhausted, and a period of inactivity followed because lode mining was hindered by high freight charges (Knopf, 1913, p. 16). Mining supplies and equipment had to be brought in by wagon train in the early years; consequently, only the richest ore could be mined.

Railroad transportation in the region became available in 1882 on completion of the Utah and Northern Railway, a part of the Union Pacific Railroad system, from Ogden, Utah, to Silver Bow, near Butte, Mont. (Winchell, 1914a, p. 20). In 1883 the main line of the Northern Pacific Railway was completed across the State, and a spur was built from Garrison through Silver Bow to Butte (Winchell, 1914a, p. 20).

The principal mining districts in Montana are scattered in the southwestern part of the State and are associated with the Boulder batholith and nearÂ¬by stocks and dikes of Late Cretaceous or early Tertiary age (Pardee and Schrader, 1933, pi. 1). The ore deposits are found in the margins of the granitic rocks or in the wallrocks.