Many large and spectacular fragments of native gold have been found in California. Most of these were taken during the gold rush and contributed further to the excitement in the mining camps and "stampedes" to the various "diggings". Few of these nuggets exist today; most were melted down soon after they were discovered. Although the term "nugget" is technically restricted to water-worn gold fragments in alluvial deposits, it frequently is used to describe chunks of vein gold not far removed from the point of origin. It is not used to describe high-grade "pockets" or small but rich ore shoots-these are listed in the next section.

The largest piece of native gold that is believed to have been found in California was the 195-pound mass taken at Carson Hill in 1854. The largest true nugget was the Willard, Dogtown or Magalia nugget, which was found at Magalia in 1859. A celebration was held and the nugget was melted in Oroville soon afterward. It weighed 54 pounds troy. Replicas are owned by the Division of Mines and Geology and the Paradise Chamber of Commerce. An annual celebration is held in Magalia commemorating the discovery.

Other spectacular nuggets found in California were:

To find a large nugget was not a blessing for all men. The Second Report of the State Mineralogist (California State Mining Bureau, 1882) tells of a French immigrant who took a piece worth more than $5,000 from Spring Gulch, in the Columbia district. The report relates (p. 149): "The discovery of this nugget proved to be a great misfortune, for the finder became insane the following day and was sent to Stockton. The French Consul recovered the nugget or the money obtained for it, and sent it to his family in France,"

The first discovery of a spectacular gold specimen in California was in the summer of 1848, when a young soldier of Stevenson's Regiment found a 25-pound nugget on the banks of the Mokelumne River. Later that same year, General E. F. Beale took it to New York, where it caused much excitement. In 1865 a beautiful cluster of gold crystals weighing 201 ounces was found in the Grit mine at Spanish Dry Diggins, El Dorado County. It was sent to New York, where it was purchased by a Mr. Fricot, who had formerly lived in Grass Valley. Later this specimen was presented to the California Division of Mines and Geology by the Fricot family and is now displayed in the Division's mineral exhibit in the Ferry Building in San Francisco. A photograph of this specimen is the frontispiece of this bulletin. 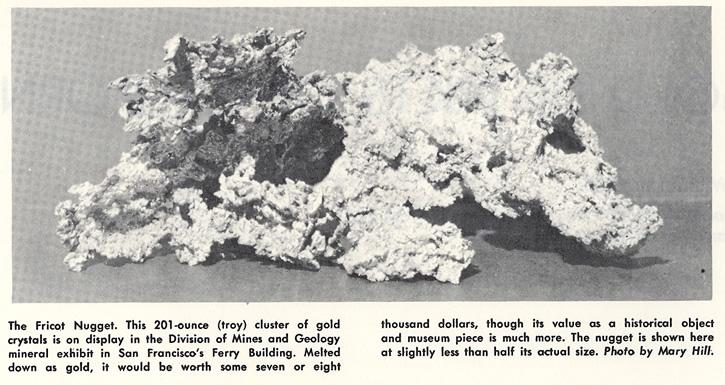 The most famous nugget of all, that found by Marshall at Sutter's Mill in 1848 and which led to California's gold rush, weighed less than a quarter of an ounce. It is not known if this nugget still exists. A flake of gold which Captain Folsom sent to Washington in 1848 and described as Marshall's first piece is now in the Smithsonian Institution. 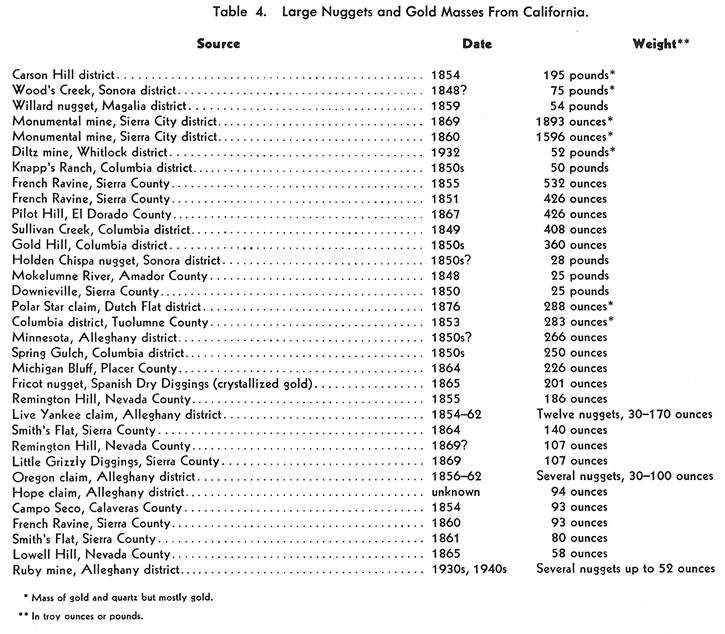