Location
This famous placer-mining district is in north-central Tuolumne County, in the vicinity of the old mining town of Columbia, five miles north of Sonora. It includes the Yankee Hill, Sawmill Flat, Squabbletown, Brown's Flat, and Springfield areas. The Sonora district is just to the south and the American Camp district lies to the northeast.

History
Columbia was one of the richest and most famous placer-mining districts in California. Early in 1850 a group of Mexican miners who had been forced off their claims at Sonora struck it rich here. Americans moved in and in turn forced them to leave. For a short period, the district was known as Hidreth's Diggings and American Camp, but it soon became "Columbia, Gem of the Southern Mines". During the 1850s and early 1860s, the diggings were enormously productive, the output averaging $100,000 or more per week. Columbia was one of the largest cities in California at this time, with an estimated population of 25,000 to 30,000. The district declined in the late 1860s, but small-scale mining continued until recently. The central portion of the old town became a state park in 1945 and is now a popular tourist attraction. Many of the famous old buildings have been restored. The value of the total production of the district has been estimated to be at least $87 million, and some have put the figure as high as $150 million.

Geology
Columbia lies in a preserved Tertiary valley with pre-volcanic features. It is a flat valley that is underlain chiefly by crystalline limestone and dolomite of the Calaveras Formation (Carboniferous to Permian). The limestone has numerous deep potholes and cavities, which contained enormously rich gravel. Several very large nuggets and gold masses were taken here, including one that weighed over 50 pounds and several weighing more than 300 ounces. Slow degradation of the area in pre-volcanic times tended to concentrate coarse gold in this flat basin. It is south of the main Tertiary Stanislaus River. Vertebrate fossils were found in the gravels. In the earlyday mining operations, the gravels were hoisted from the potholes and washed through sluices and long toms on raised platforms. 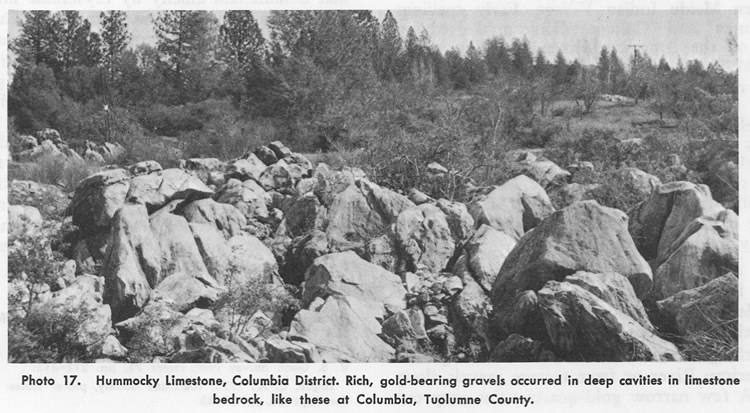 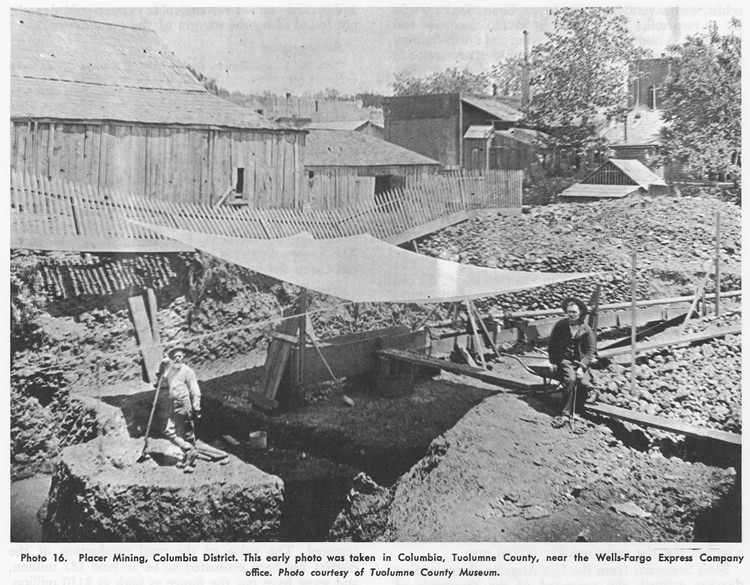 Louderback, G. D., 1933, Notes on the geologic section near Columbia, California, with special reference to the occurrence of fossils in the auriferous gravels: Carnegie Inst. Washington, Publ. no. 440, pp. 7-13.