Location
The Sierra City district covers an extensive area in central Sierra County. It includes the Fumier, Loganville, Church Meadows, Gold Valley, and Sierra City-Sierra Buttes areas. It is located at the south end of the major belt of gold mineralization that extends north-northwest to the Johnsville district in Plumas County (fig. 22).

History
This district was placer-mined soon after the beginning of the gold rush. Many coarse nuggets were recovered at that time. Sierra City was founded in 1850; destroyed by an avalanche in 1852, it was soon rebuilt. Many Indians lived in this district in those days. The famous roistering society E. Clampus Vitus originated in Sierra City. It was reorganized several years ago by the California Historical Society.

The Sierra Buttes mine was opened in 1850, and most of the other important lode mines soon afterward. A number of very rich high-grade surface pockets were discovered, including one at the Four Hills mine that yielded between $250,000 and $500,000. The district was highly productive from about 1870 until 1914. There was some mining activity again during the 1920s and 1930s, and intermittent prospecting and development work has continued until the present time. The value of the total output of the district is unknown, but it is estimated to be at least $30 million.

Geology
A northwest-trending belt of Calaveras (Carboniferous to Permian) slate, schist, and quartzite with limestone lenses runs through the west portion; a quartz porphyry (metarhyolite) belt lies in the central portion, and greenstone and amphibolite schist, to the east. A belt of meta-tuff of the Milton Formation (Jurassic) extends along the east margin. A few serpentine lenses are present. The northeastern area is overlain by glacial moraines. Tertiary andesite caps some of the ridges and rhyolite caps some Eocene auriferous channel gravels.

Ore Deposits
An extensive series of north- to northwest- and occasionally northeast-trending quartz veins range from a few feet to as much as 40 feet in thickness. The veins occur in all of the metamorphic rocks. The ore bodies contain free gold, pyrite, and minor galena and chalcopyrite. The ore shoots often were large (up to 300 feet long and several thousand feet deep) and usually averaged 1/3, to 1/2, ounce of gold per ton. Much high-grade ore was taken from the district. Several fairly extensive magnetite deposits are found in the north end of the district. 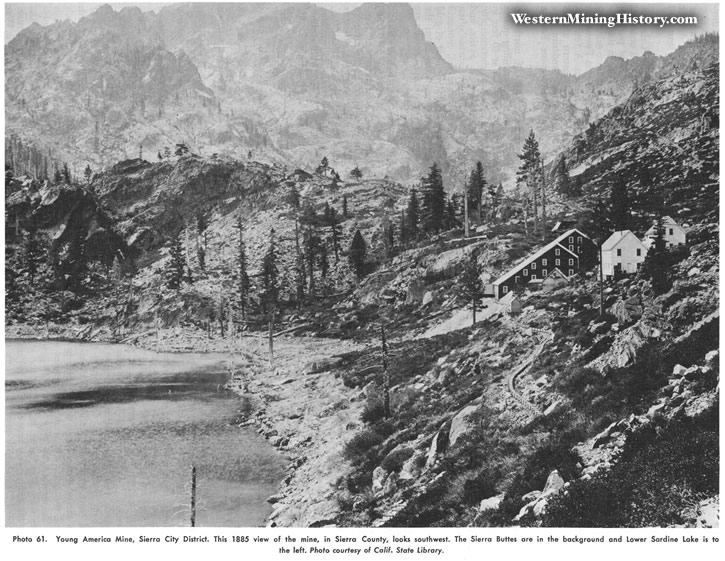 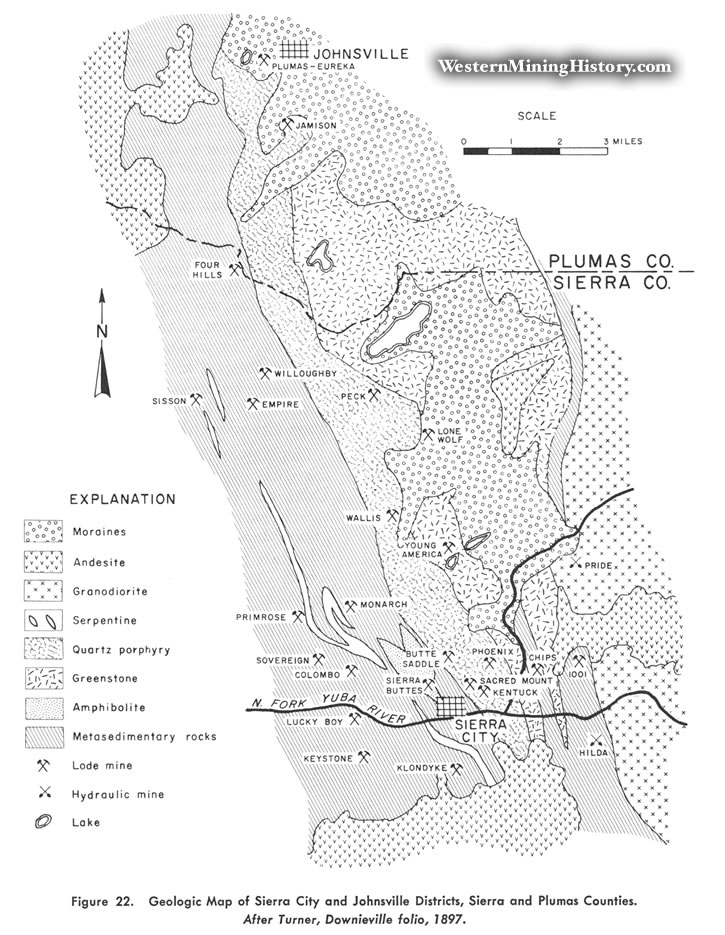