The Shasta copper-zinc belt is in west-central Shasta County in the foothills of the Klamath Mountains and a few miles north of Redding. The two main areas of mineralization are known as the West and East Shasta districts (fig. 27). Part of the East Shasta district has been inundated by Shasta Lake.

Gold- and silver-bearing gossans were originally mined in these districts during the 1860s. Later, from the 1890s to about 1920, copper and zinc ores were mined in large quantities and treated in several nearby smelters. Substantial amounts of by-product gold were recovered in these operations, especially in the West Shasta district. For example, the Mammoth mine, during the period of 1905 to 1925, yielded 132,510 ounces of gold from copper-zinc are at an average of .039 ounces of gold per ton. During the 1930s substantial amounts of gossan were mined for gold near the Iron Mountain mine. The total gold output of the West Shasta district is estimated at 520,000 ounces. The total production of the East Shasta district is unknown, but during the period 1900-52, the district was credited with an output of 44,000 ounces of gold.

The are deposits consist of either bodies of massive pyrite with varying amounts of chalcopyrite and sphalerite in rhyolite or sulfide minerals disseminated in schist. Veins or replacement deposits exist in schist and limestone. Most of the massive sulfide bodies are lenticular and range from a few tens of feet long to one at the Iron Mountain mine that is 4500 feet long. The gold content of these deposits usually ranges from .01 to .1 ounce per ton. 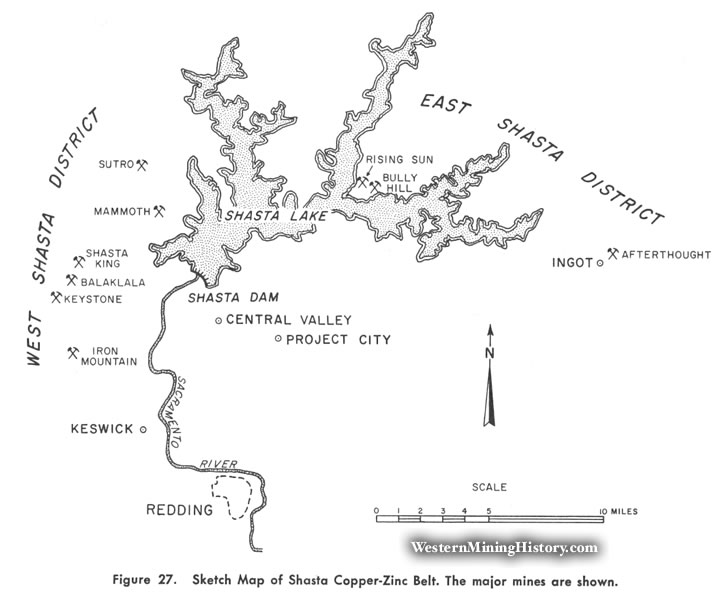