Location
The Rand or Randsburg district lies athwart the Kern-San Bernardino County line in the vicinity of the town of Randsburg, about 40 miles northeast of Mojave and 30 miles north of Kramer. The western part of the district, in Kern County, has been chiefly a source of gold, while the eastern part, in San Bernardino County, has been largely a source of silver. The Atolia tungsten district is just to the southeast (fig. 30).

History
Although this region was prospected as early as the 1860s, it was not until placer gold was discovered in 1893 in Goler Wash, in the El Paso Mountains 15 miles to the west, that there was any mineral production. Numerous short-lived dry-washing camps soon sprang up in the entire region. The Yellow Aster mine, originally known as the Olympus, was located in 1895. Other discoveries were made, and the rich ore recovered in these early operations led to a gold rush. The district was named for the Rand district in South Africa. The ore was first shipped out for treatment, but a 100-stamp mill was erected at the Yellow Aster mine in 1901 and other mills were built soon afterward. During the early days some difficulty was encountered in concentrating the gold because of the presence of "heavy spar" or scheelite.

Large-scale gold mining continued until 1918. The famous and highly productive Kelly or California Rand silver mine was discovered in 1919 and was operated on a major scale through the 1930s. Gold production from the district was substantial in the 1930s and early 1940s, and there has been intermittent prospecting and development work since. The total gold output of the district is estimated at more than $20 million. During the two world wars and the Korean War, Atolia was the source of large amounts of tungsten ore. From 1897 until 1933 Randsburg was served by a branch of the Santa Fe Railroad, which extended north from the main line at Kramer.

Geology
The principal rocks underlying the district are the Precambrian Rand Schist and the Atolia Quartz Monzonite of Mesozoic age. The Rand Schist is chiefly biotite schist with smaller amounts of amphibolite and quartzite. To the east are poorly consolidated clays, sandstones, and conglomerates of continental origin, which are overlain by andesite at Red Mountain. Rhyolite and latite intrusives are in the east-central part of the district.

Ore Deposits
Most of the lode-gold deposits are in veins that occur along faults, except at the Yellow Aster mine, where the gold is in a series of closely spaced veinlets in small fractures. The majority of the gold deposits are in the schist, which is more wide-spread than the quartz monzonite, and nearly all are in an area where the rocks have been colored a pale red by iron oxides (fig. 30). The veins are unoriented but usually have a well-defined hanging wall.

The ore bodies most commonly occur in the vein footwalls, usually at or near vein intersections or in sheared and brecciated zones. The ore consists of iron oxide-stained brecciated and silicified rock containing native gold in fine grains and varying amounts of sulfides. The sulfides increase at depth, but the gold values decrease. Most mining has stopped where unoxidized sulfides were found in the veins, and the maximum depth of development is 600 feet. Milling ore contains from 1/7 to 1/4 ounce of gold per ton. The high-grade ore nearly always occurs in pockets near the surface. Most of the placer gold has been recovered from dry placers at Stringer or in the Rand Mountains north of Randsburg. 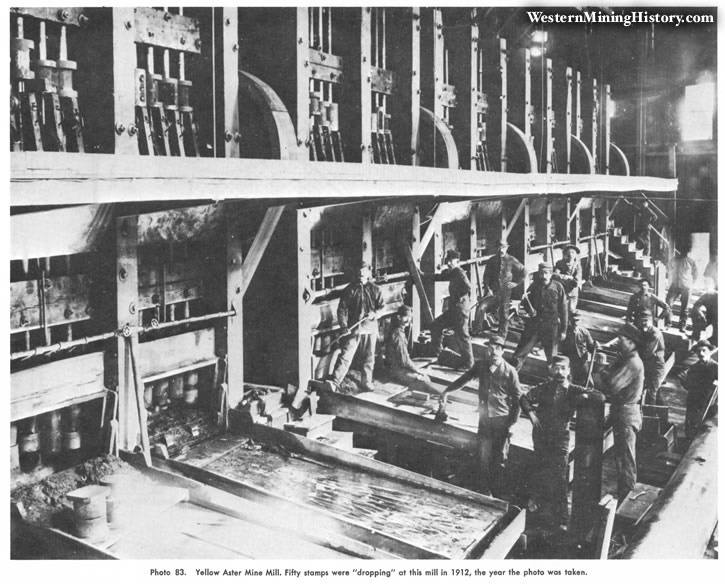 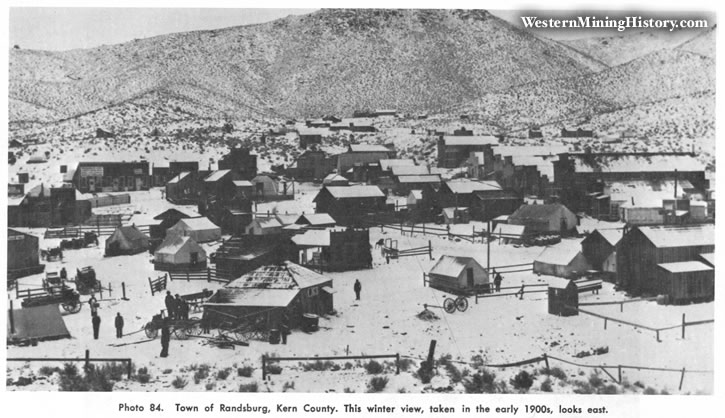 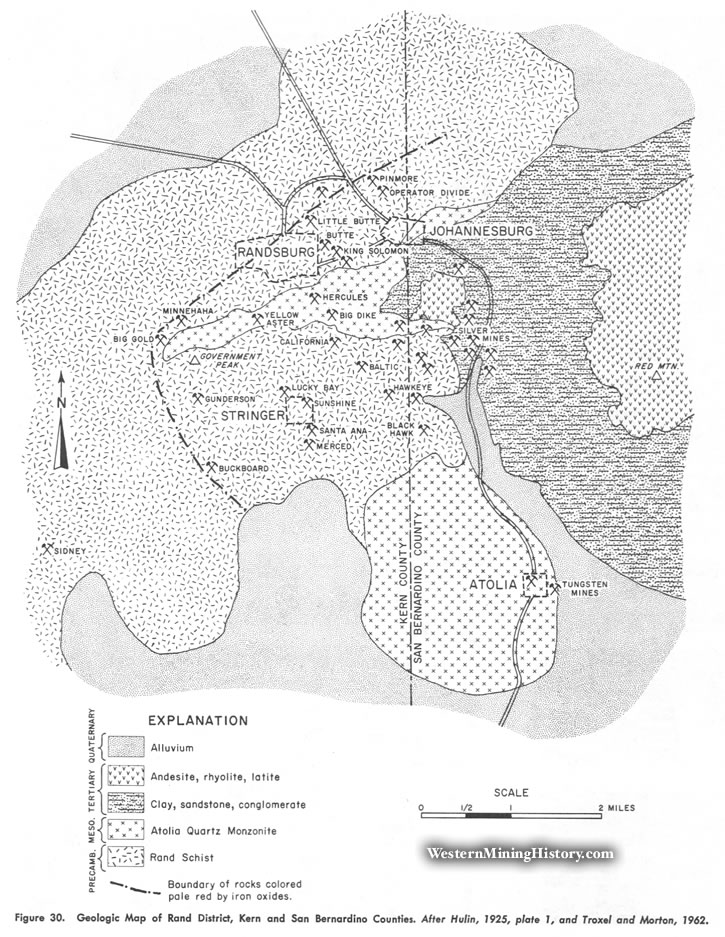