The Prospector Comes Home When The First Snow Flies (1899 Newspaper)

"The prospector is this month receiving the cordial greetings of his friends and acquaintances as he returns from his summer pilgrimage through the mountains and along the streams."

A description of the American Prospector by the Chamber's Journal of Edinburgh, Scotland.

One Man Succeeds Where Another Wholly Fails (1890 Newspaper)

Tale of a destitute prospector who became rich, and famous, after he discovered an abandoned claim.

The story of a pair prospectors seeking a lost gold mine in the Four Corners area of the southwest US - "having the gold craze once does not vaccinate a person from having the same disease once or many times more."

In its 55 years of near continuous publication from 1868 to 1923, the White Pine News moved six times to six different mining camps and towns, all within a 45-mile radius, including Treasure City, Ely, and East Ely. White Pine County in eastern Nevada epitomized the dramatic and sometimes violent boom and bust of western mining and mining camps. 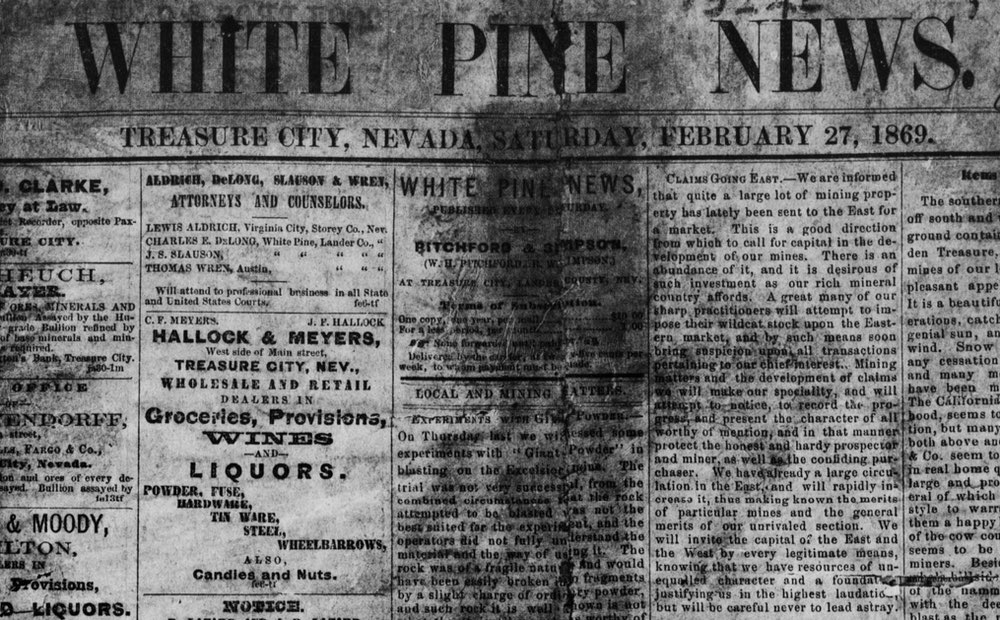 On October 2nd, the Sneffels Stage was robbed as it transported mail and gold bullion from Camp Bird to Ouray, Colorado. The bandits were pursued relentlessly, but one managed to escape after many days dodging the law. The other, a young man known as "Kid Adams" was not so lucky, and was killed by a deputy. This was not the end of the story though, as it was determined that the deputy murdered Adams rather than bring him in to face charges.

A prospector describes his search for a lost gold mine in Death Valley, and his discovery of the remains of miners in a remote mining cabin.

The Mining Review takes pleasure in calling attention to the fact that Mercur, in Camp Floyd district, Tooele county, this state, is Utah's greatest gold camp....

San Juan - In the Heart of the Mining Districts (1875 Newspaper)

"In conclusion let me say this San Juan country is the greatest mineral section upon the face of the globe." This 1875 letter from a prospector traveling the early mining districts of the San Juan mountains of Colorado briefly describes some of the earliest towns of the area, and gives interesting insight into the mind of a pioneer prospector.

Brief report on prospectors caught in a Death Valley blizzard, forcing them to make a gruelling trek to Cerro Gordo. Facing starvation the men killed and ate a donkey: "jackass meat, as an article of diet, is a lamentable failure."

Book chapter gives a good overview of the discovery of gold at Cripple Creek, and the early development of the towns and mines of the district.

This fascinating true account from the Oregon gold fields tells of how miners got justice for an injured fellow through the establishment of a frontier court of law.

“Big” Ed Burns, one of the most notorious characters in the West, was arrested last night by Officers Clark and Reynolds. Burns is known all over the United States, and has been known to turn a bunco trick in St. Louis and Chicago on the same day. He will do anything from robbing a coop to a gold brick swindle.

Dredging for Gold in California (1911 Engineering and Mining Journal)

Article details the gold dredging industry in California as of 1911. Many interesting details are recorded, including that California had at least 61 active gold dredges during that year. 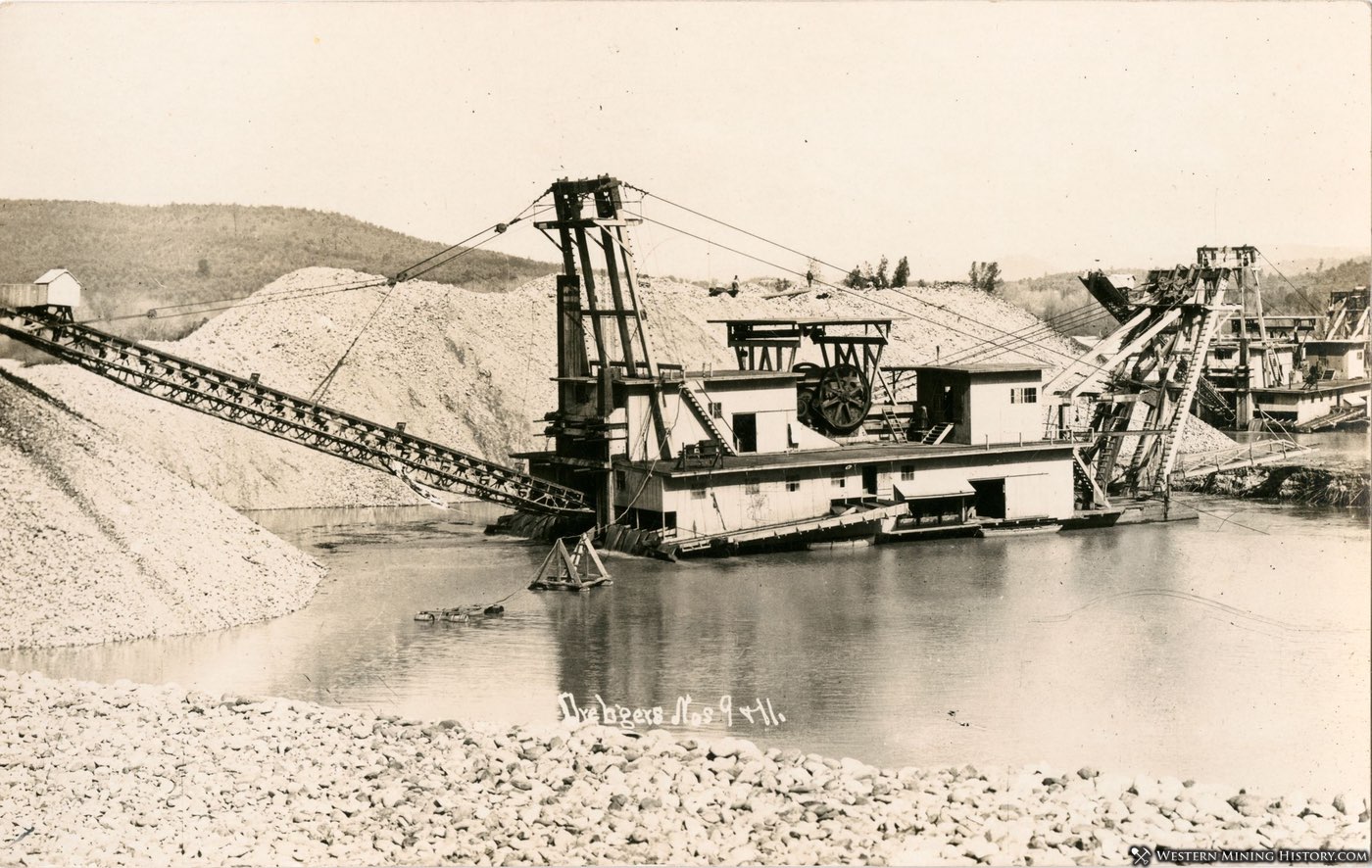 The Trinity River region in northwestern California has long been worthily noted for its placer mines, the working of which opened with a rush in the early ’50’s and has continued with more or less regularity ever since. 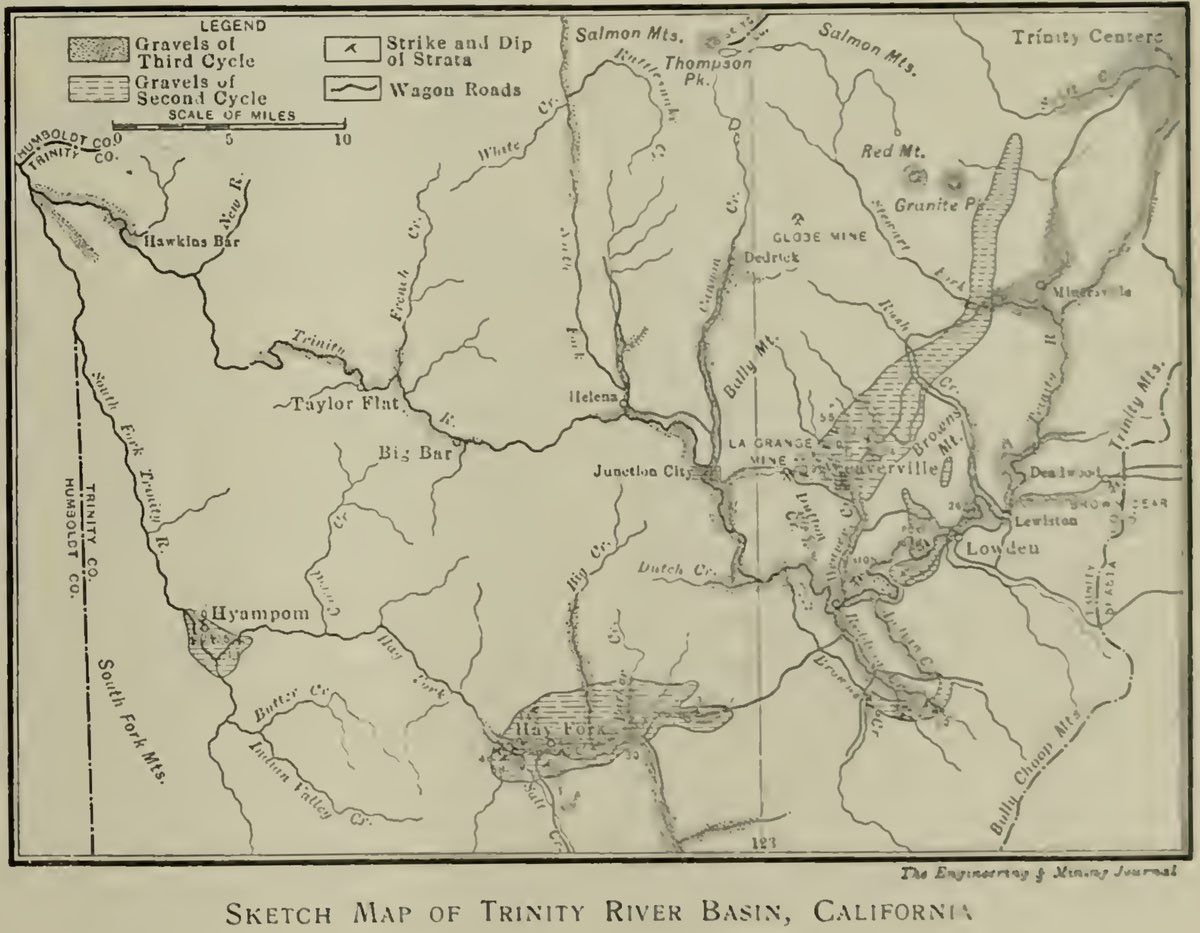 The Ophir Mine (Virginia City, Nevada) (1876 Engineering and Mining Journal)

Summary of the Ophir mine annual report details the destruction of the devastating 1875 fire, and discusses the great effort that went into rebuilding the mine infrastructure.

The Georgetown Route to Leadville (1879 Newspaper)

Description of the road conditions and stage coach travel from Georgetown to Leadville in 1879. The article contains a fascinating description of early Kokomo.