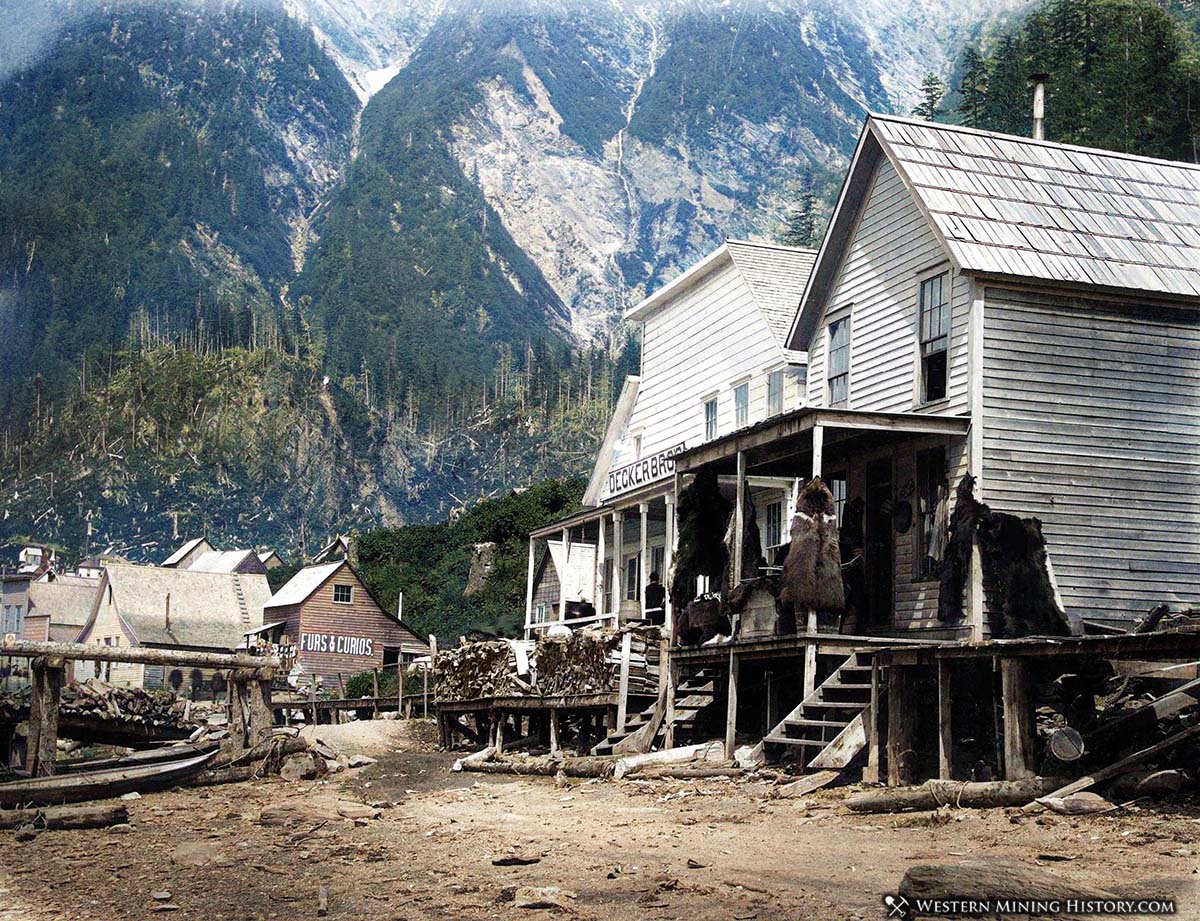 Juneau was first settled after gold discoveries in 1880. The initial settlement was called Harrisburg, then was changed to Rockwell, and finally Juneau. The first post office was established in 1882 under the Juneau name. 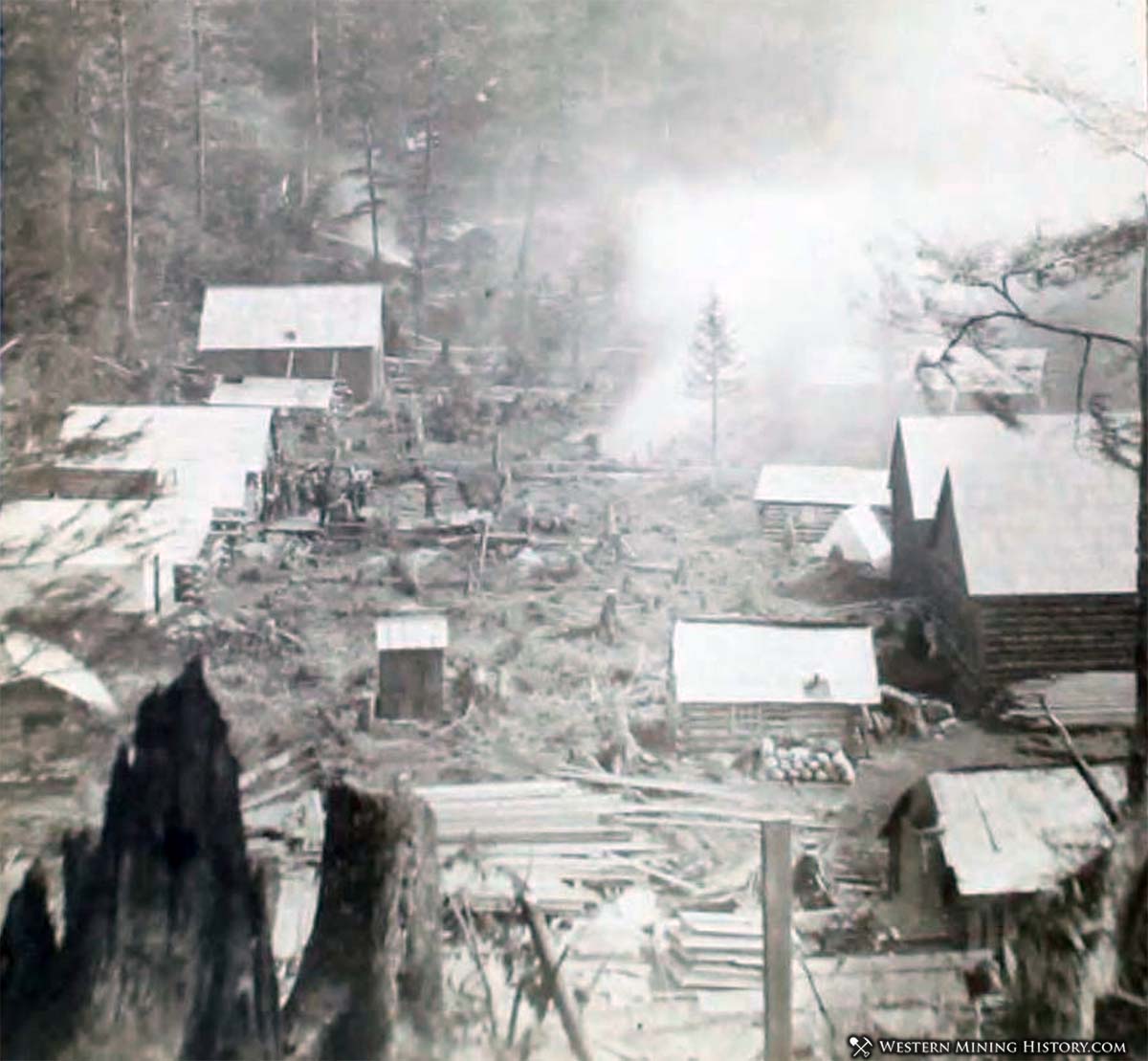 An article from the from the September 20, 1897 Tacoma Daily Ledger (Tacoma, Washington) described the early discovery and settlement:

The first discovery of gold in the quartz district of which Juneau is the center was made by two pioneer prospectors, Richard Harris and Joseph Juneau. At the beginning of the summer of 1880 these men started in a canoe from Sitka to prospect the mainland coast. August 15 they discovered gold in a stream, which they afterward named Gold creek. Their provisions became exhausted, and consequently they did not dare to ascend the stream to its source, but they did bring back with them 150 pounds of gold quartz and 13 grains of dust. 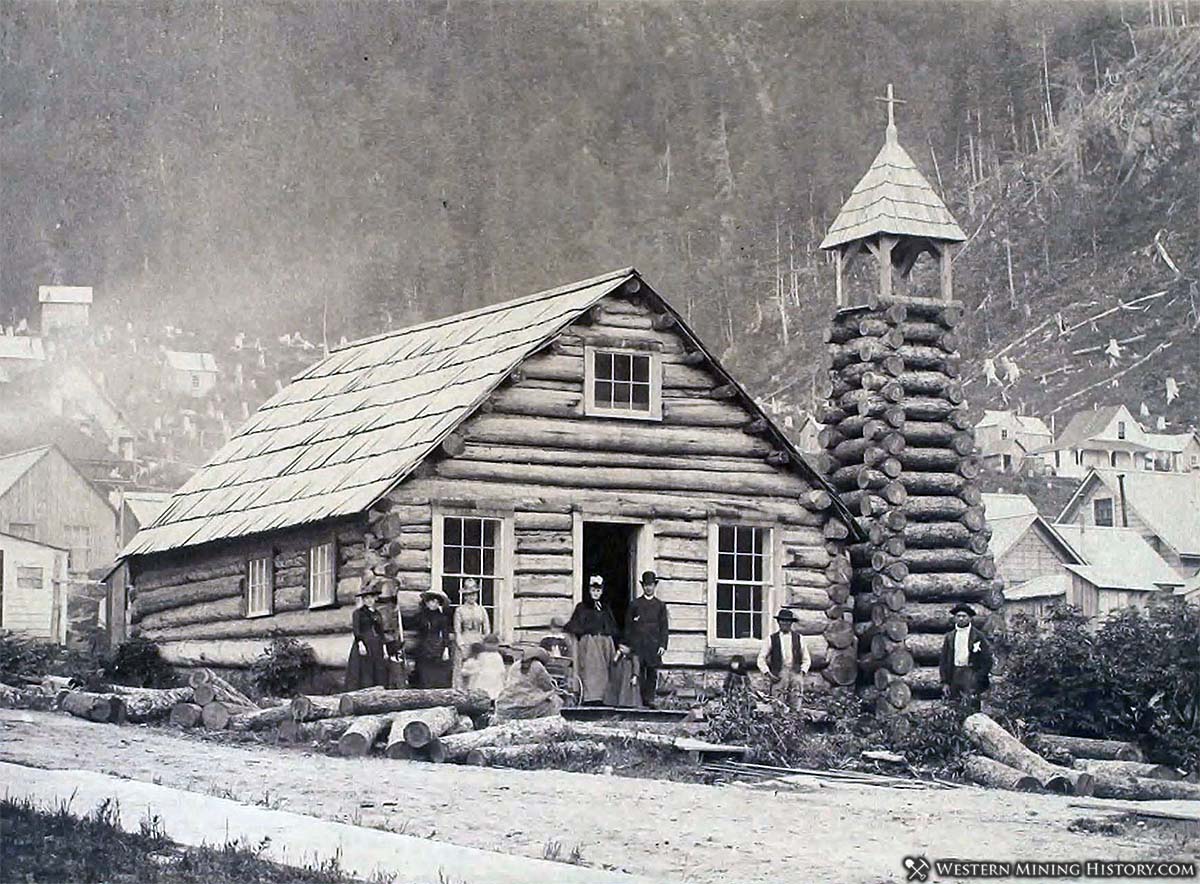 They hustled around and got another outfit, and hurried back to Gold creek. They found its source in a little round valley inclosed by steep glacier capped mountains. This spot they named Silver Bow basin, after a place of that name in Montana. On the slopes of the mountain encircling the basin gravel was found worth from 15 to 30 cents per pan, and quartz that seemed to have been splashed with gold.

October 4 Juneau and Harris, aided by three natives, located their choice of placer ground, and in a month filed eighteen quartz claims. They organized the Harris Mining District, adopted local rules, and staked off a townsite at the mouth of the creek, which they named Harrisburg. They then returned to Sitka with 960 pounds of gold valued at $14,000. 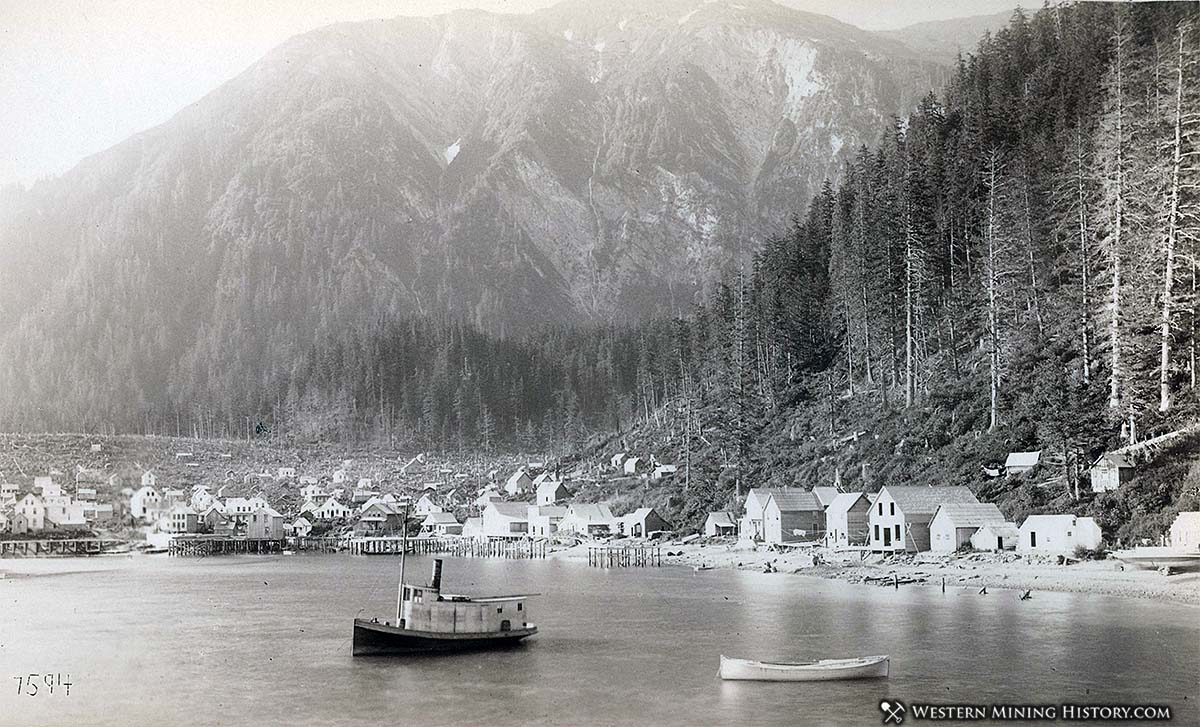 As usual great excitement followed. Every one in the quiet town who could procure boats, canoes, or steam launches rushed off for Harrisburg. The ground was rapidly staked off, and soon there was quite a city at this point. In 1881 the town's name was changed to Rockwell in honor of Lieutenant Rockwell of the United States navy. Later, at another meeting of miners, the place was rechristened Juneau, in honor of Joseph Juneau. 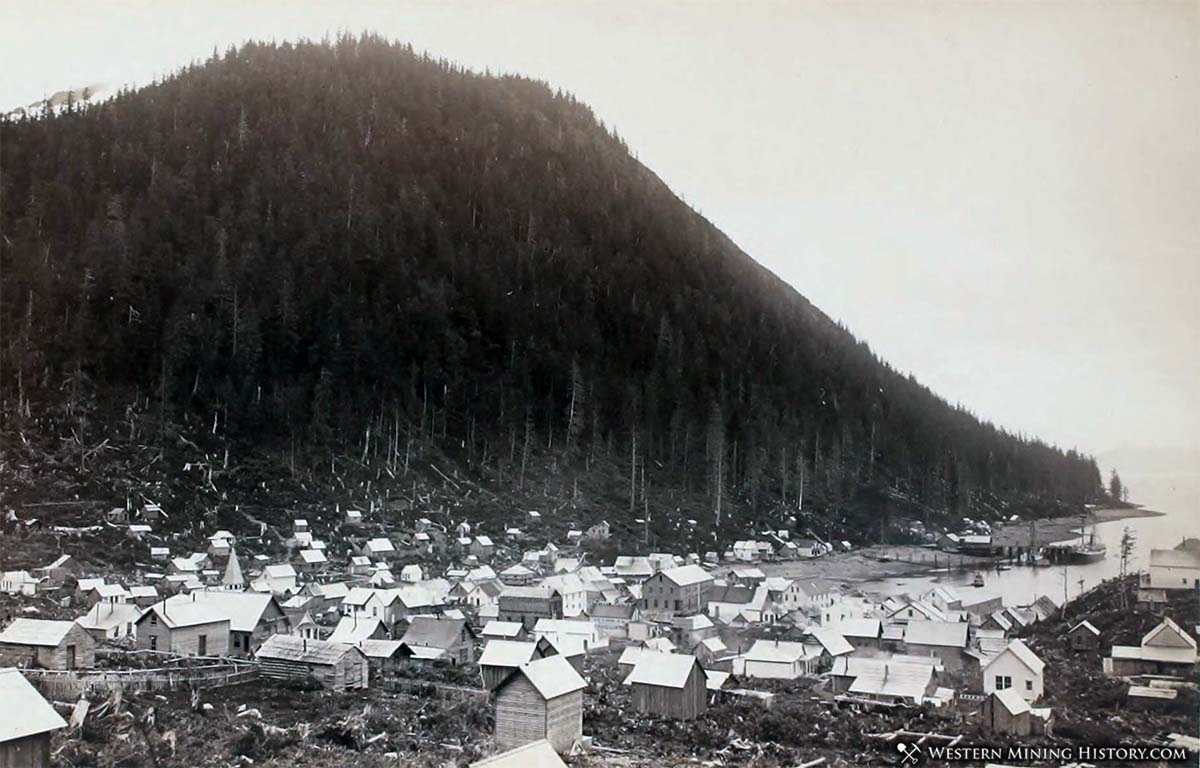 In 1881 gold was discovered four miles from Juneau on Douglas Island. Some of the claims on the island would become the famous Treadwell Gold Mine, one of the West's richest producers. The Douglas island mines helped spur the growth of Juneau as the area became a major gold district. 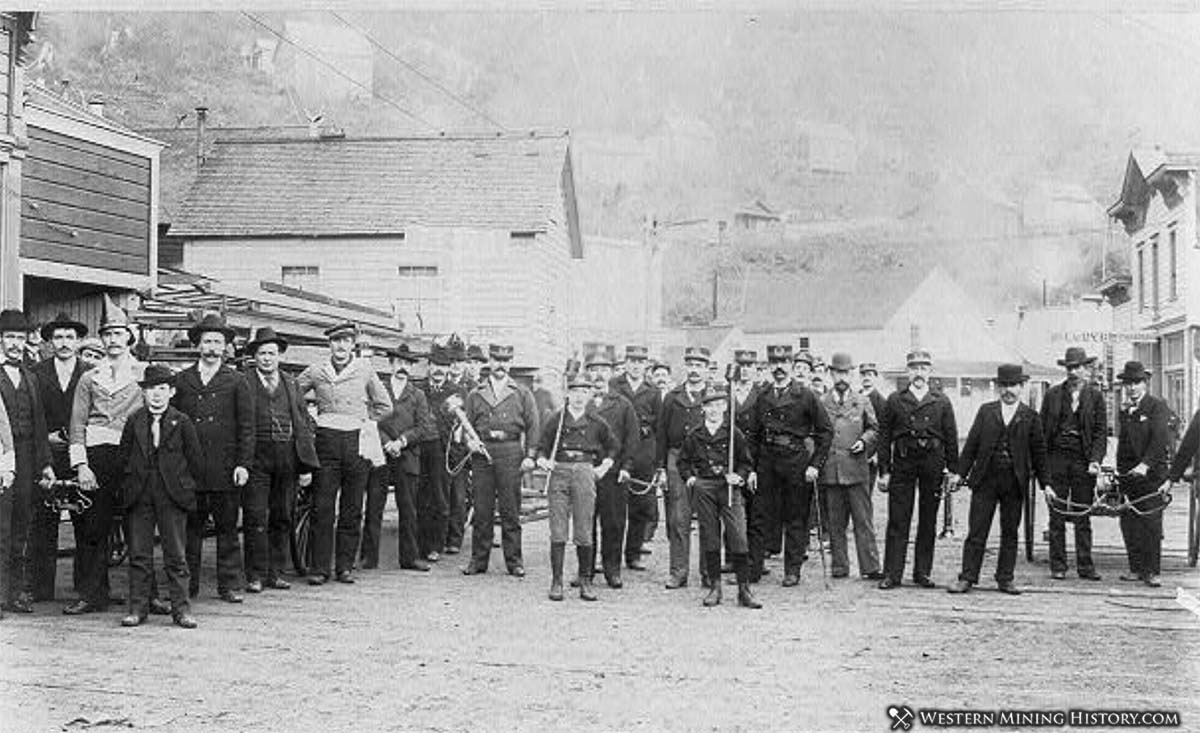 Juneau became the territorial capital in 1906 and then became the state capital after statehood was achieved in 1959.

Legacy of the Juneau Gold Mines 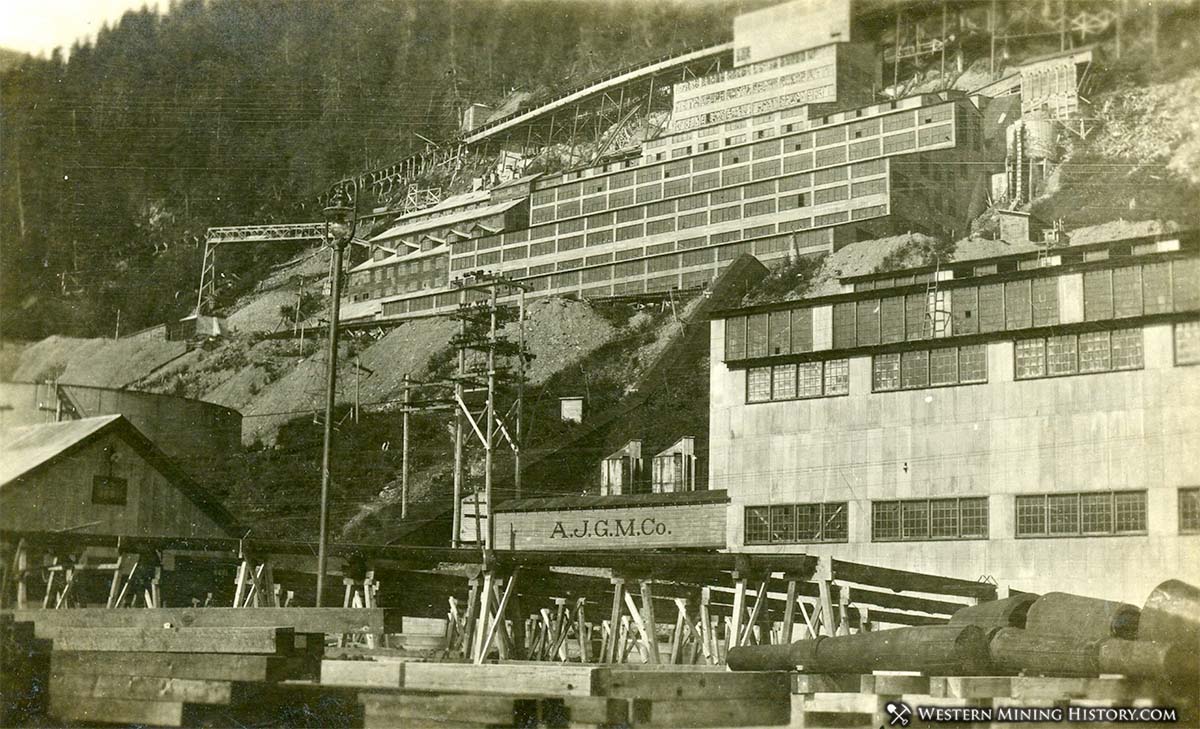 A 1968 report by the USGS calls Juneau the largest gold lode mining district in the state. Although the Treadwell mine closed in 1917, other mines in the area became significant producers. The following graph from the USGS shows a resurgence of Alaskan gold production around 1940 that is largely credited to the Alaska Juneau mine, which was said to be one of the largest low-grade gold mines in the world at the time. 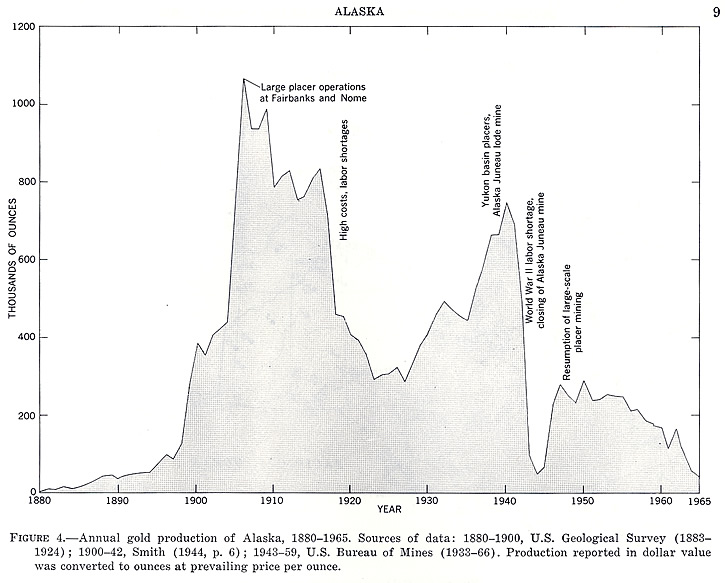 The USGS report gives an overview of the leading mines in the district through World War 2: 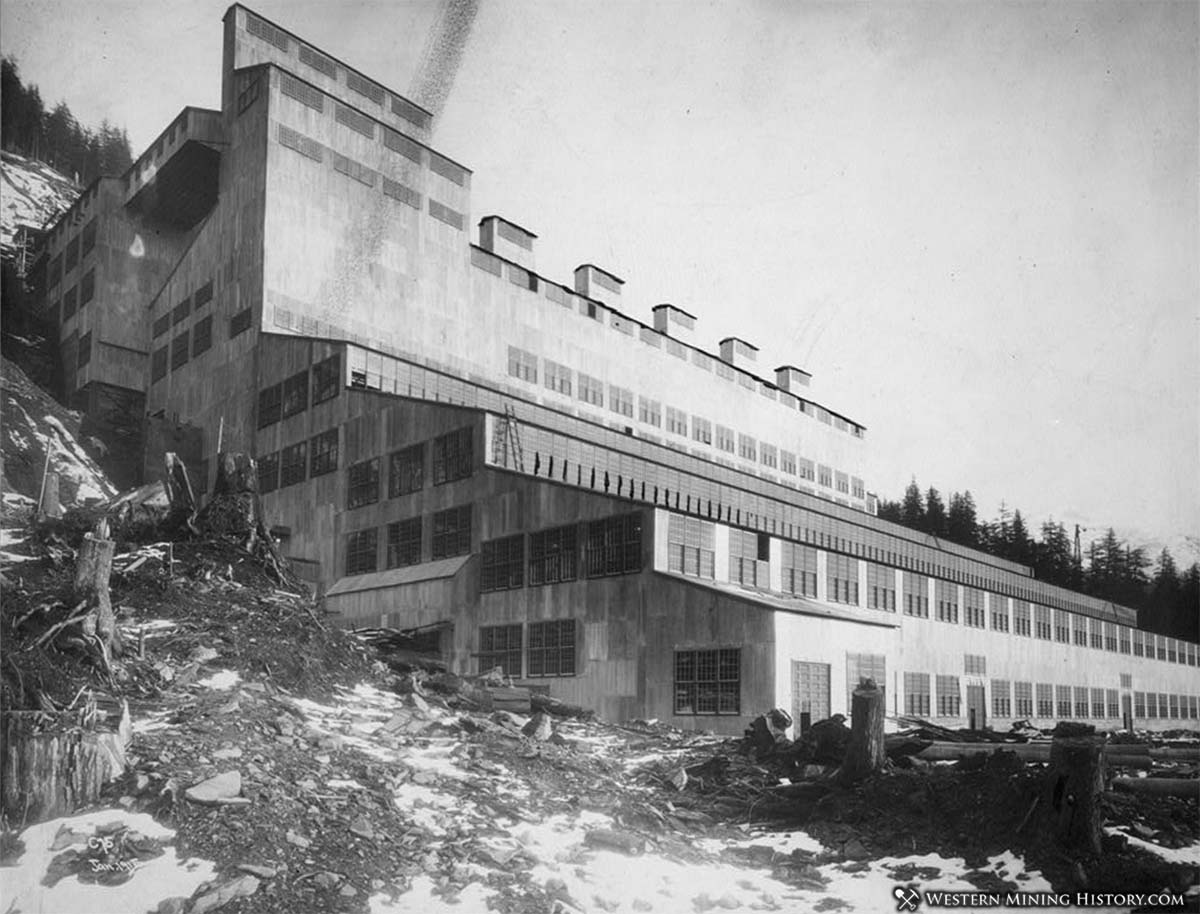 Other important mines in the early days of this camp were the Sumdum and Ebner. Production records for the Alaska Juneau mine began in 1893 and are complete to April 9, 1944, when the mine was closed due to manpower shortages and excessive costs. This mine yielded a total of 2,874,361 ounces of gold, almost as much silver, and large quantities of lead.

Today, Juneau's economy is largely based on tourism and its role as the state capital, but mining is still important in the area. The actively producing Greens Creek mine on nearby Admiralty Island is one of the world's largest silver mines.