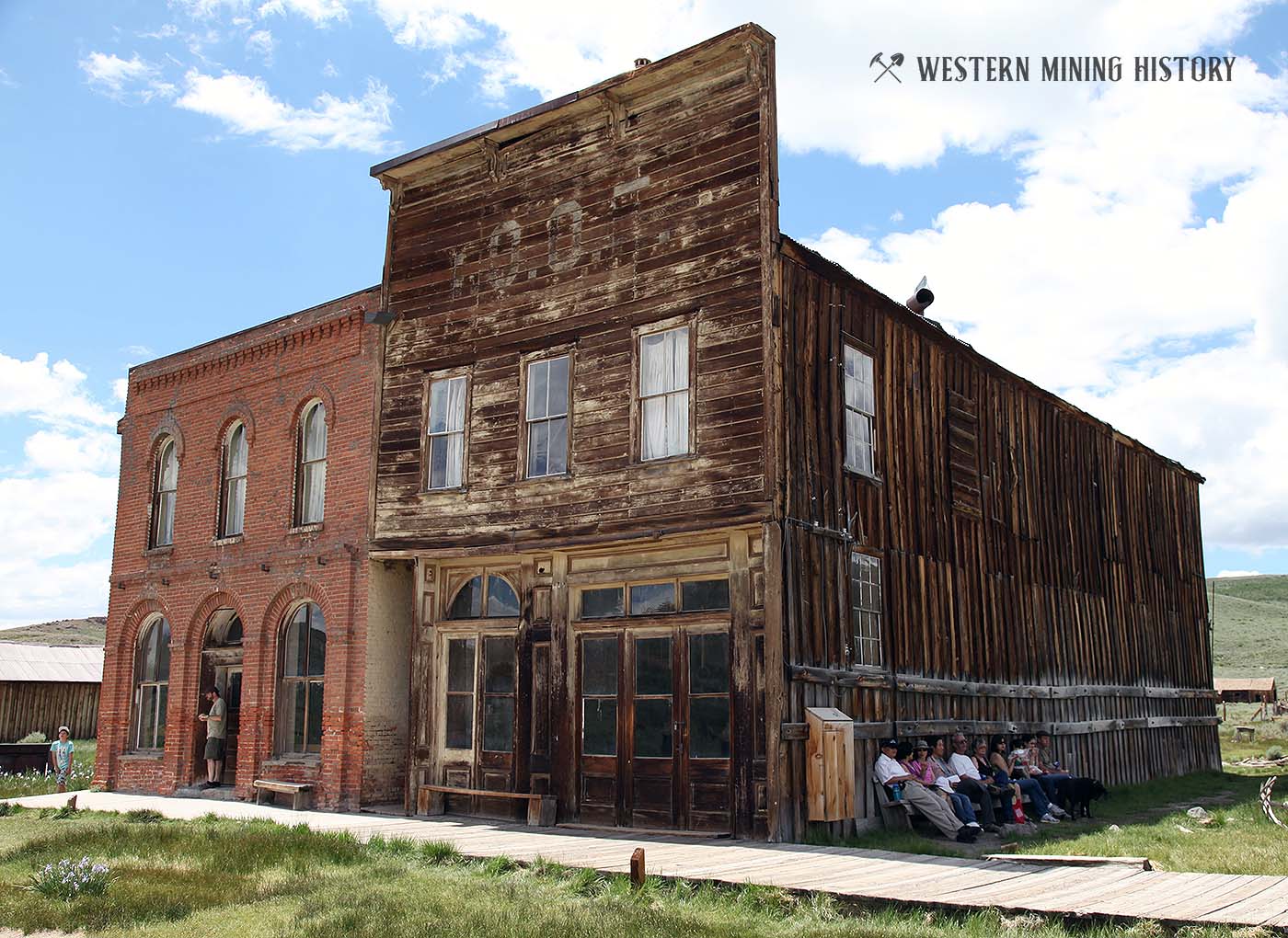 Bodie was a slow starter as far as gold rush towns go. For years, it was touted as the next place to go to hit it big. Bodie just needed someone to believe in it. The isolated mountainous location didn’t really encourage an influx of gold-seekers when there were more accessible locations to mine.

Waterman S. “Bill” Bodey believed in Bodie. He was the pioneer miner who first found gold in the high peaks east of the future town. Bill Bodey was working a placer claim he established in July 1859. In November of that year he froze to death in a snowstorm. The storm blocked the trail to Bodey’s cabin and he may have gotten lost trying to find his way back.

His name lives on in the name given to the new mining district in the locale a few years later. The story goes that a sign painter in nearby Aurora, Nevada, misspelled the name as “Bodie” and it stuck. 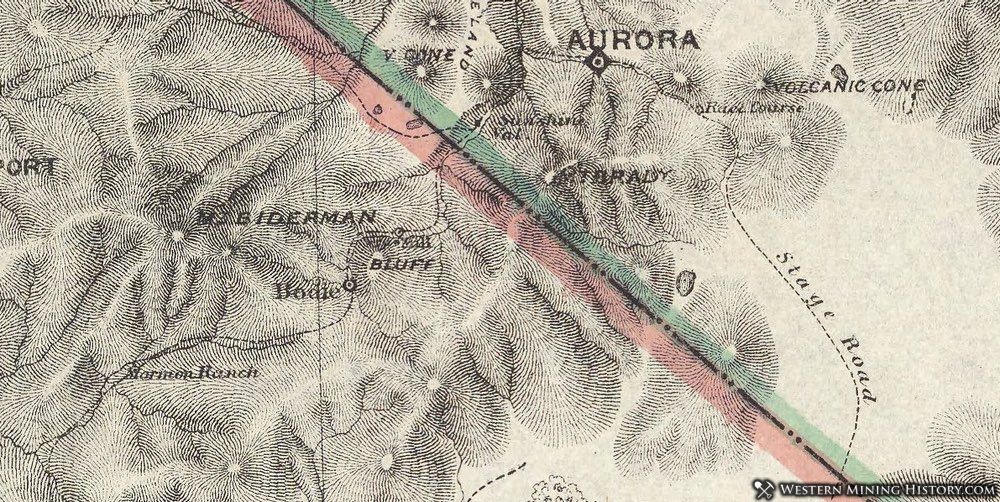 Quartz deposits containing gold and silver were located at Bodie beginning around September 1860. The Bodie Mining District was established in June 1861 and a stamp mill was built. Although rich placers were noted, a lack of water was a problem, especially during the freezing winter months. At this time, Bodie was still a small mining camp, with about 20 resident miners.

Mono County was established in April 1861 with the county seat at the young town of Aurora. There was a slight problem, though. Once the line between California and Nevada was surveyed, Aurora came out on the wrong side of the line, in the new state of Nevada.

Mono County did not believe enough in Bodie to make the mining camp the county seat. The town of Bridgeport, seven miles north of Bodie, was voted by the locals as the new county seat in June 1864. Bridgeport began as a campground for teamsters hauling lumber to the mines at Aurora, Bodie, and other camps. 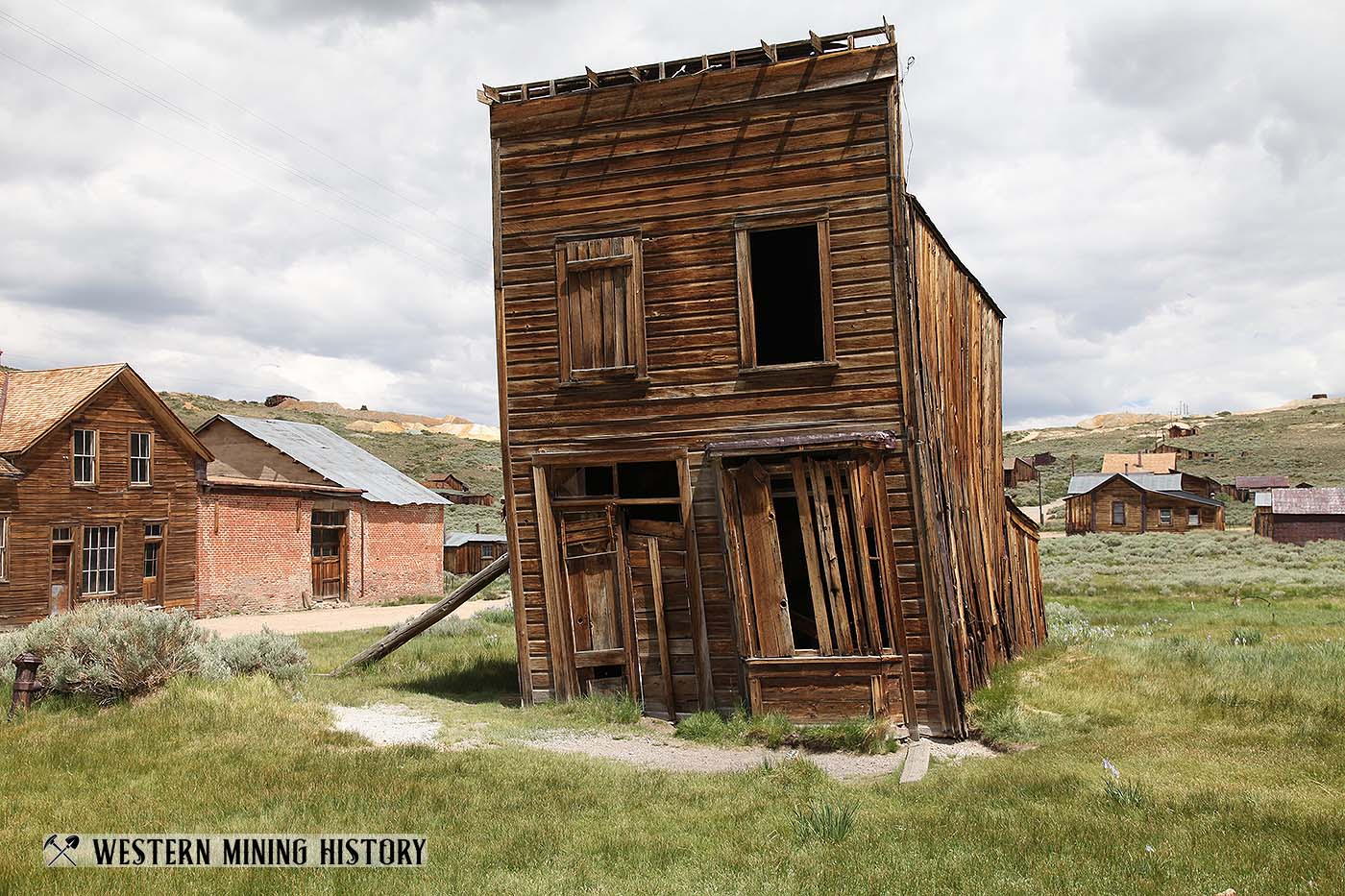 Progress at the Bodie mines was reported in a letter from Aurora to a San Francisco newspaper in November 1863. The mines at Bodie were taking out the most valuable ore the author had “ever seen on this side of the mountains.”

A survey of Bodie Bluff in 1863 found that the summit was 750 feet from its base, where the miners’ cabins were located. The supervisor of one of the mining companies had built a “fine large shed” over the entrance to the Osceola mine shaft in the fall of 1863, to “protect the workmen from the cold and snow blasts that blow almost incessantly during the winter season.” The shed also served as a locale for sorting the ore. 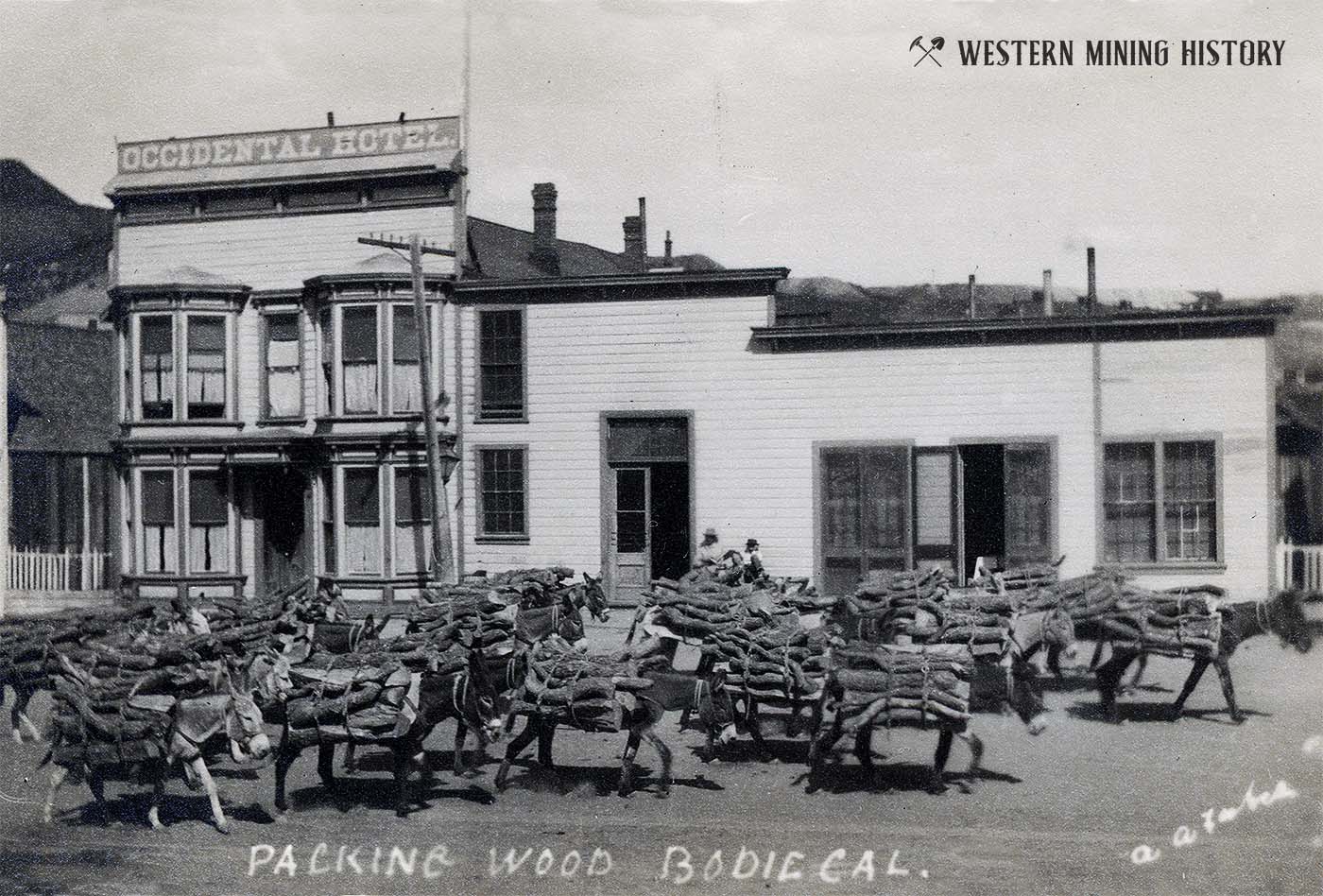 Rumors were swirling in the summer of 1864 that New Yorkers with a half million dollars to invest in mining were on their way to Bodie. The New Yorkers ended up establishing the Empire Mining Company. For another decade, mining was sporadic and small in scale in Bodie. Reported mismanagement closed the Empire Mill and Mining Company, and it was sold in bankruptcy in 1868. The new owners planned to run the mill more regularly.

The governor of California, a Mr. Blasdel, bought the Home Stake Mine and Mill at Bodie in 1868. No major strikes in Bodie caused much excitement, though. That began to change by the mid-1870s, with more promising discoveries.

Silas Smith believed in Bodie. He opened a store in Bodie in May 1877, moving the building from his business in Aurora, Nevada. The U.S. Postal Service opened a post office in Bodie by April 1877. In December of that year, the first non-stop stagecoach trip from Carson, Nevada reached Bodie. After February 1878, three stages a day linked Aurora to Bodie. 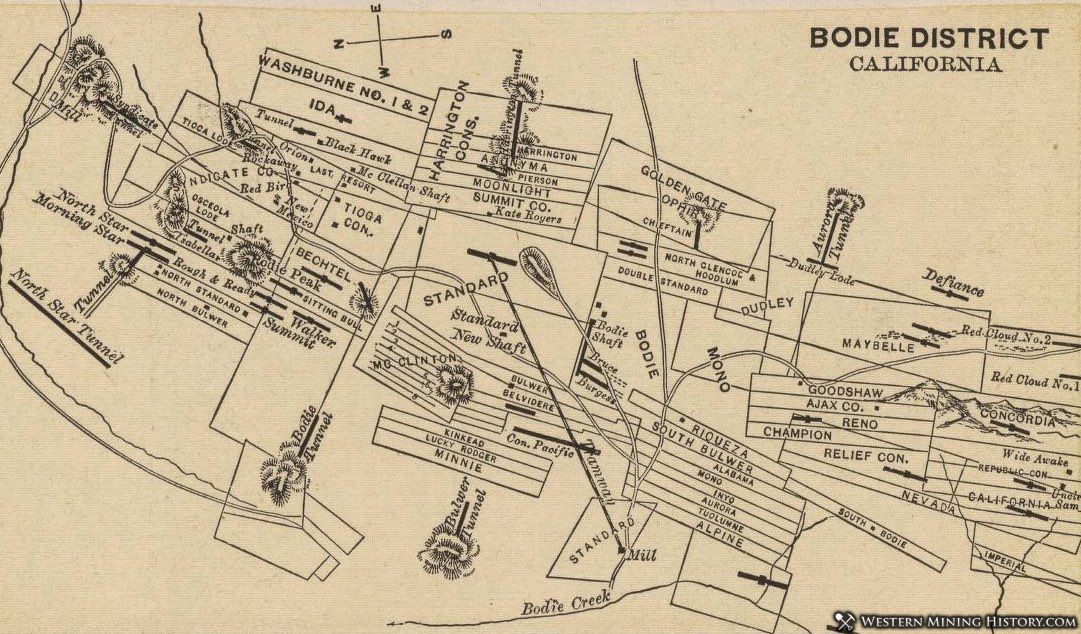 A rich strike by the Bodie Mining Company in June 1878 convinced even more folks that Bodie really was the next big thing. Miners and would-be miners flocked to Bodie and it seemed like everyone finally believed in the little town.

With the gold rush to Bodie, dozens of businesses followed, hoping to part some of their earnings from the miners on payday. Saloons, dance halls, opium dens, and brothels soon lined the streets. Shootings became a common occurrence in the town.

Bodie Had A Lawless Reputation

Bodie had its share of mischief during the boom years. One character caught the country’s attention, known as the “Bad Man of Bodie.” One former resident - Oscar Morgan, son of the Mono County sheriff - claimed in 1939 that the moniker applied to more than one person. Another former local thought the story was fictional. 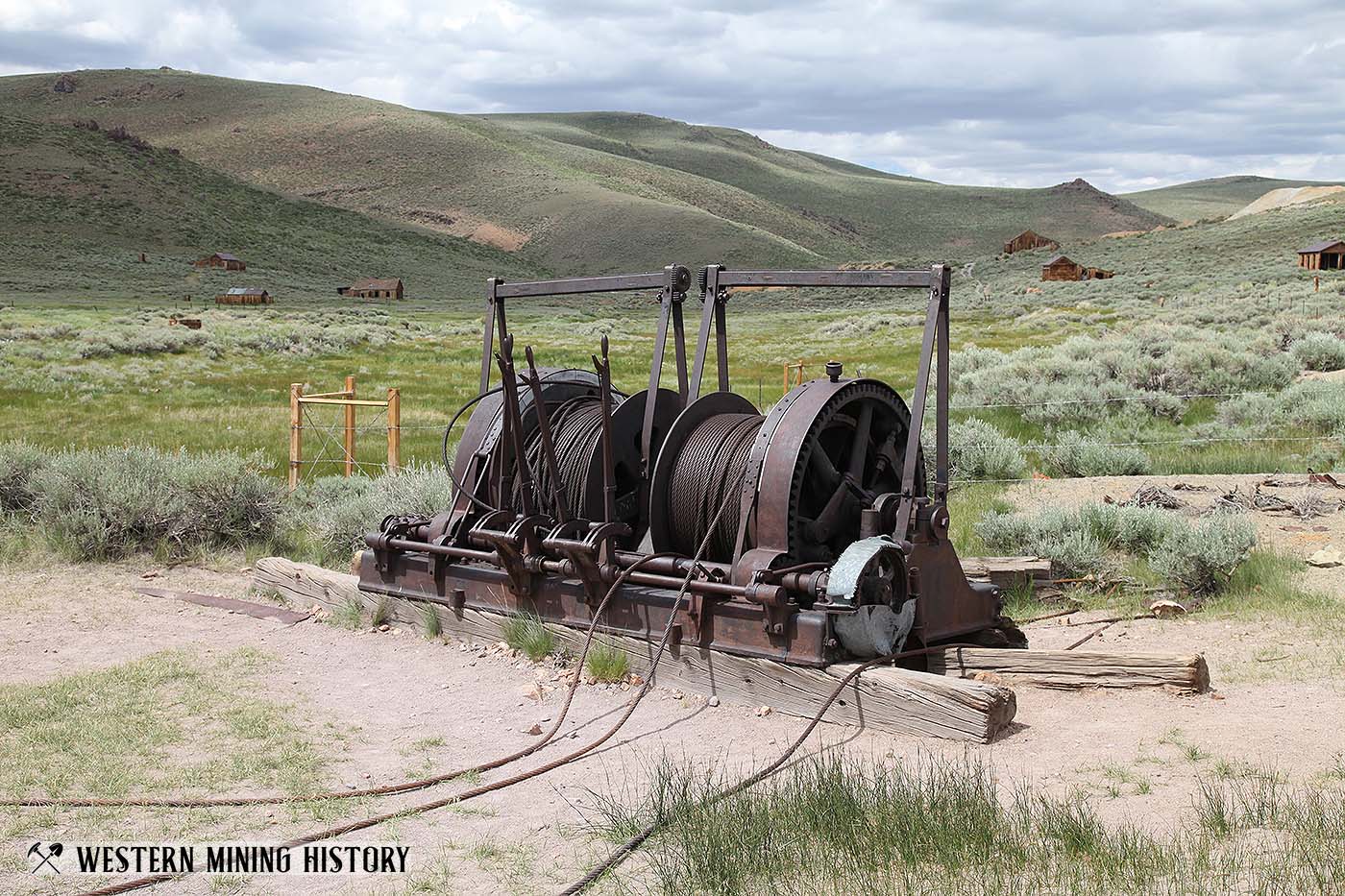 Hoists on display at Bodie

One fantastic tale of the Bad Man of Bodie has him in a gunfight in the street at two feet apart from his opponent. After being shot in one arm and falling, the opponent is said to have managed to use his knees to hold his gun while firing the fatal shot with his good arm, downing the Bad Man once and for all.

A local legend tells of a little girl who was moving from San Francisco with her family to Bodie. She reportedly wrote in her diary “Goodbye, God, I’m going to Bodie.” This child definitely did not believe in Bodie.

Silas Smith and four other local men contributed funds to build a racetrack on the flat south of town along Bodie Creek. Gambling on the horse races became a popular pastime for the locals for decades to come. 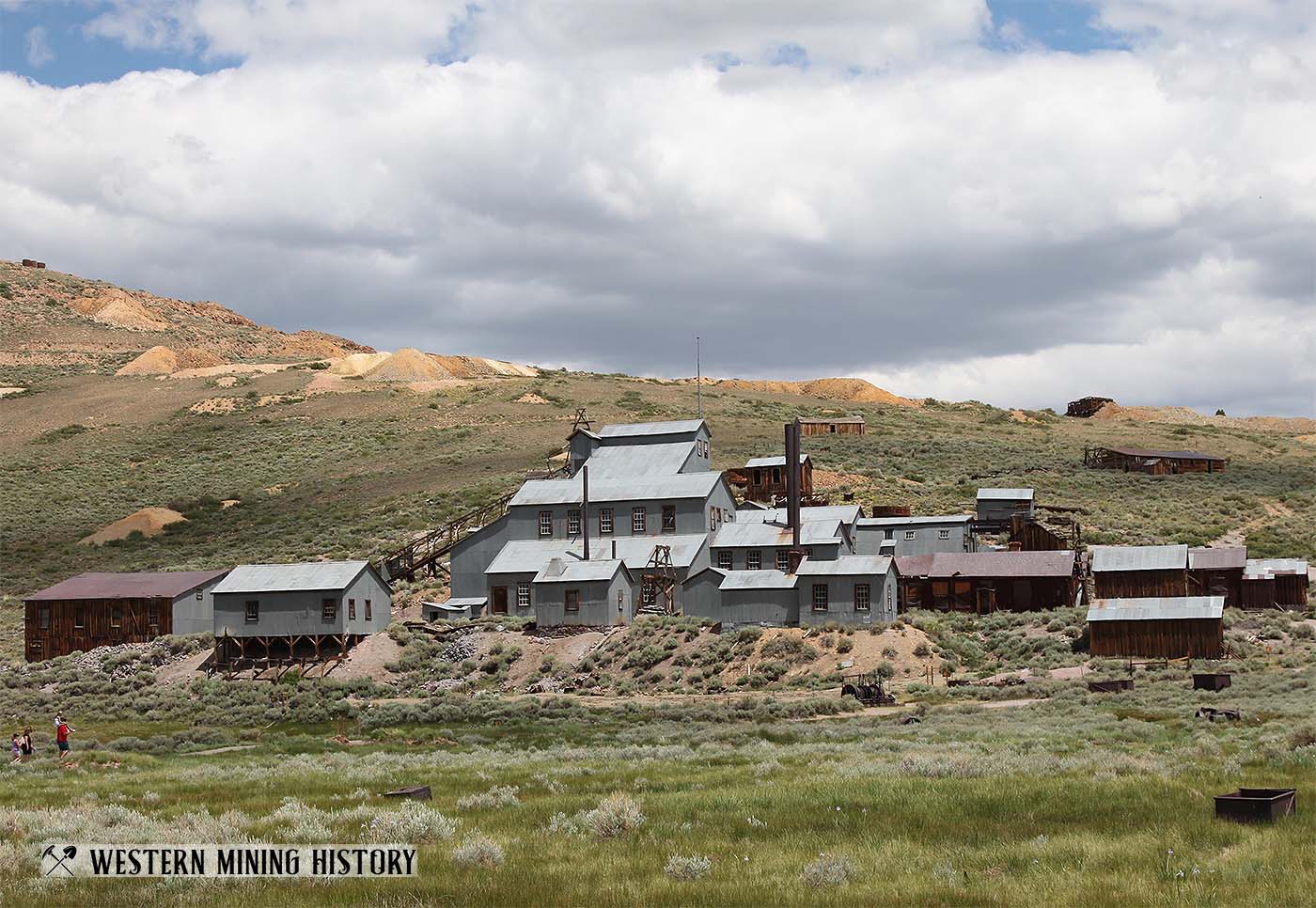 Bodie was a large camp situated at high elevation, and in a barren landscape. Constant wood shortages for both use in the mines and by the citizens plagued the town. These shortages became an insurmountable problem by the early 1880s as mining activity peaked.

During Bodies Boom years, there was an estimated 60 miles of mine tunnels that needed timbering. The Standard Mill alone used 20 cords of fuel wood a day, and all the mines in the area used over 300 cords per day during times of peak production. Add to that the thousands of residents needing wood for cooking, heating, and construction, and Bodie was in need of entire forests worth of wood but no way to get it.

Bodie's insatiable demand for fuel wood and lumber led to the creation of the Bodie and Wood and Lumber Company’s sawmill in Mono Mills. Located around 32 miles south of Bodie near Mono Lake, Mono Mills was linked to Bodie by a narrow gauge railroad by November 1881. Spur lines to connect the mill to timber regions were finished in 1882. 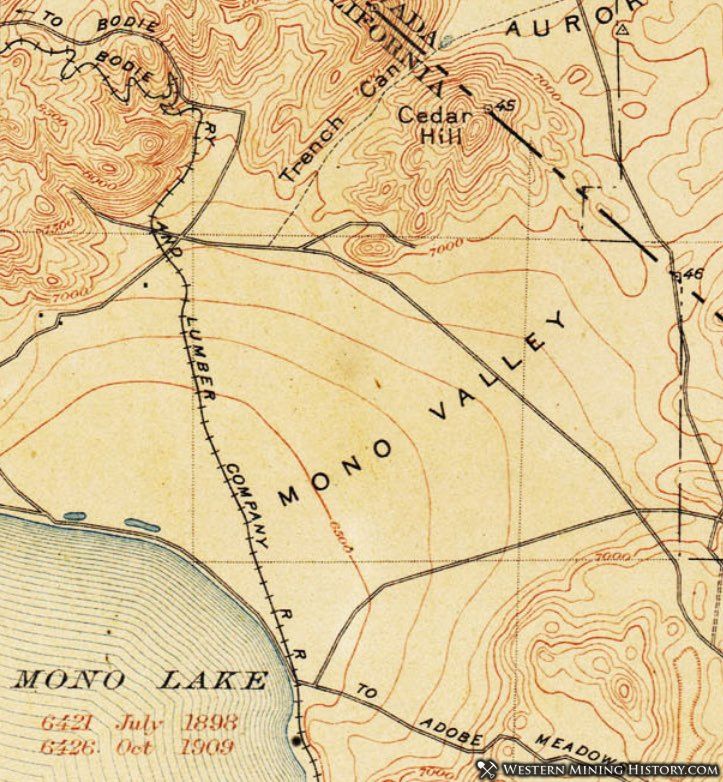 Mono Mills was an isolated community that existed almost entirely to serve Bodies need for wood. The railroad only connected Bodie to Mono Mills, there were no outside connections to either community.

Mining activity in Bodie had waned by the early decades of the twentieth century and demand for lumber products declined. With the decreased need for lumber, the rail line to Mono Mills was abandoned in 1918. The depot remains standing in Bodie but nothing is left in Mono Mills.

The Bodie boom started to slow during the latter half of the 1880s and the population dwindled from its peak of nearly 10,000. The two newspapers printed in town were consolidated to one in 1880, to be published weekly.

A twenty-stamp mill in town burned down in 1898, dealing a blow to the Standard Consolidated Mining Company. While the mill was totally destroyed, the company’s office and cyanide plant were saved; insurance only partly covered the damage. 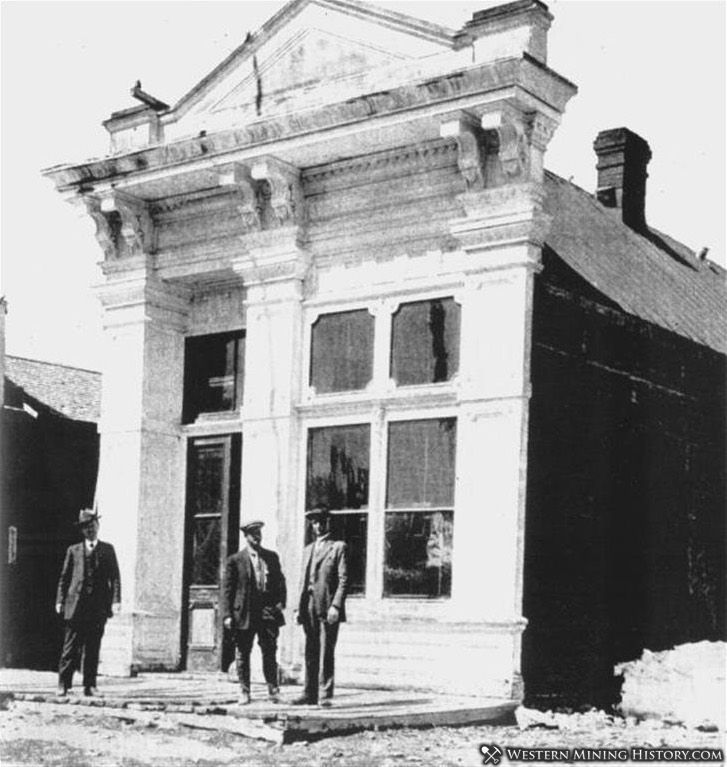 Perhaps more than anyone who came before him, James Stuart Cain believed in Bodie. Born in 1854, Cain moved to Carson City, Nevada in 1875. He and his wife moved to Bodie, where Cain worked in the lumber, freighting, mining, and banking industries. Cain never gave up on Bodie, always predicting it would see another boom time. He purchased many properties in town and lived until age 84, dying in 1938.

Bodie was possibly the best-preserved town in the West in 1930, but most of its buildings were wooden. A disastrous fire in 1932 destroyed two-thirds of the business district. Most of the holdouts still living in Bodie did not rebuild, and the town was deserted by the late 1930s. For decades, a resident caretaker was the lone occupant. 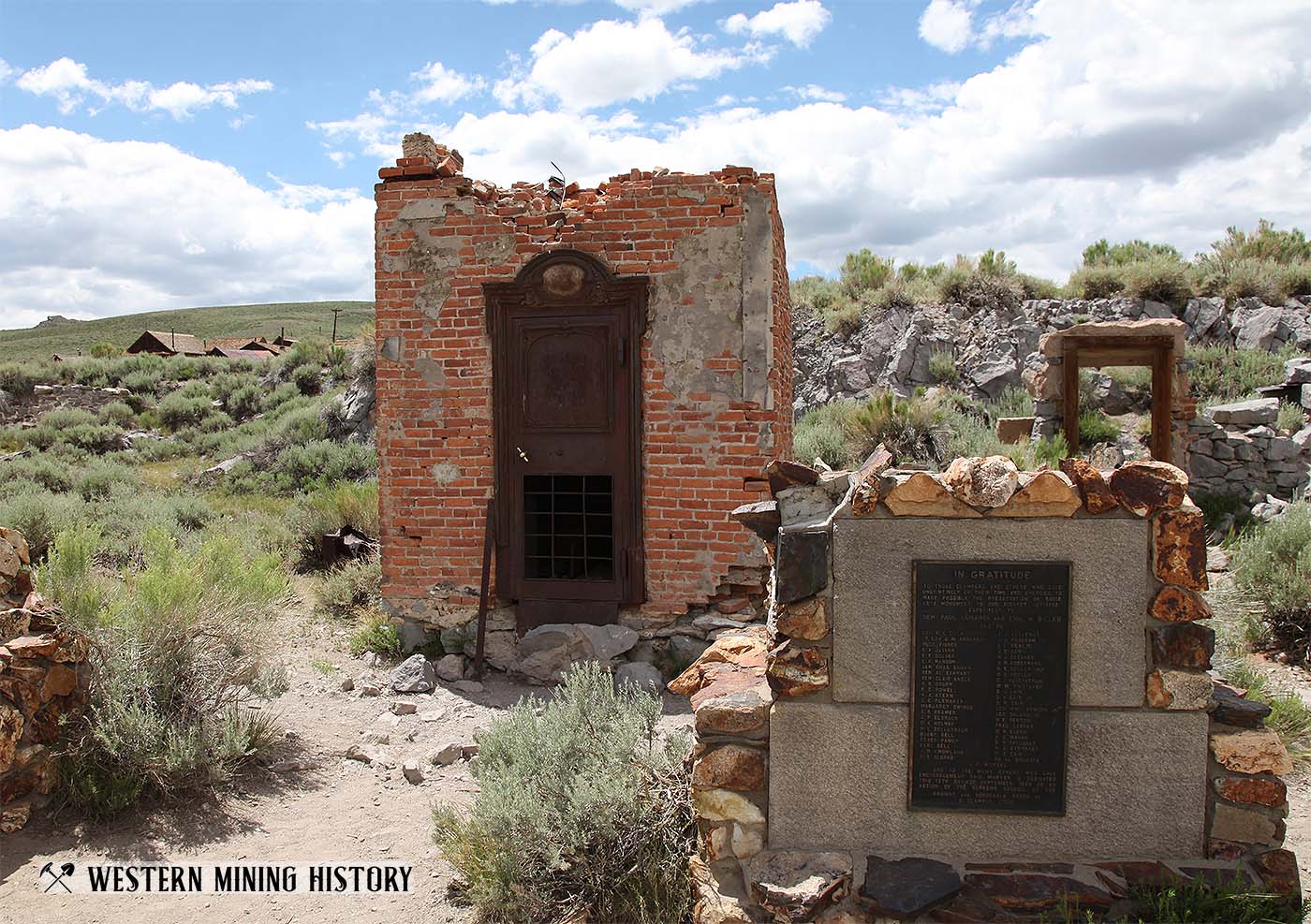 Remains of the Bodie bank today

The California Department of Parks has turned the ghost town into the Bodie State Historic Park. The remaining buildings have been kept in a “state of arrested decay” since 1962. The town was listed on the National Register of Historic Places in 1966.

Over one hundred buildings still stand in Bodie. The Bodie Mercantile building in the town offers guidebooks for sale. Visitors can roam the town and the cemetery to learn about the former residents and workers. 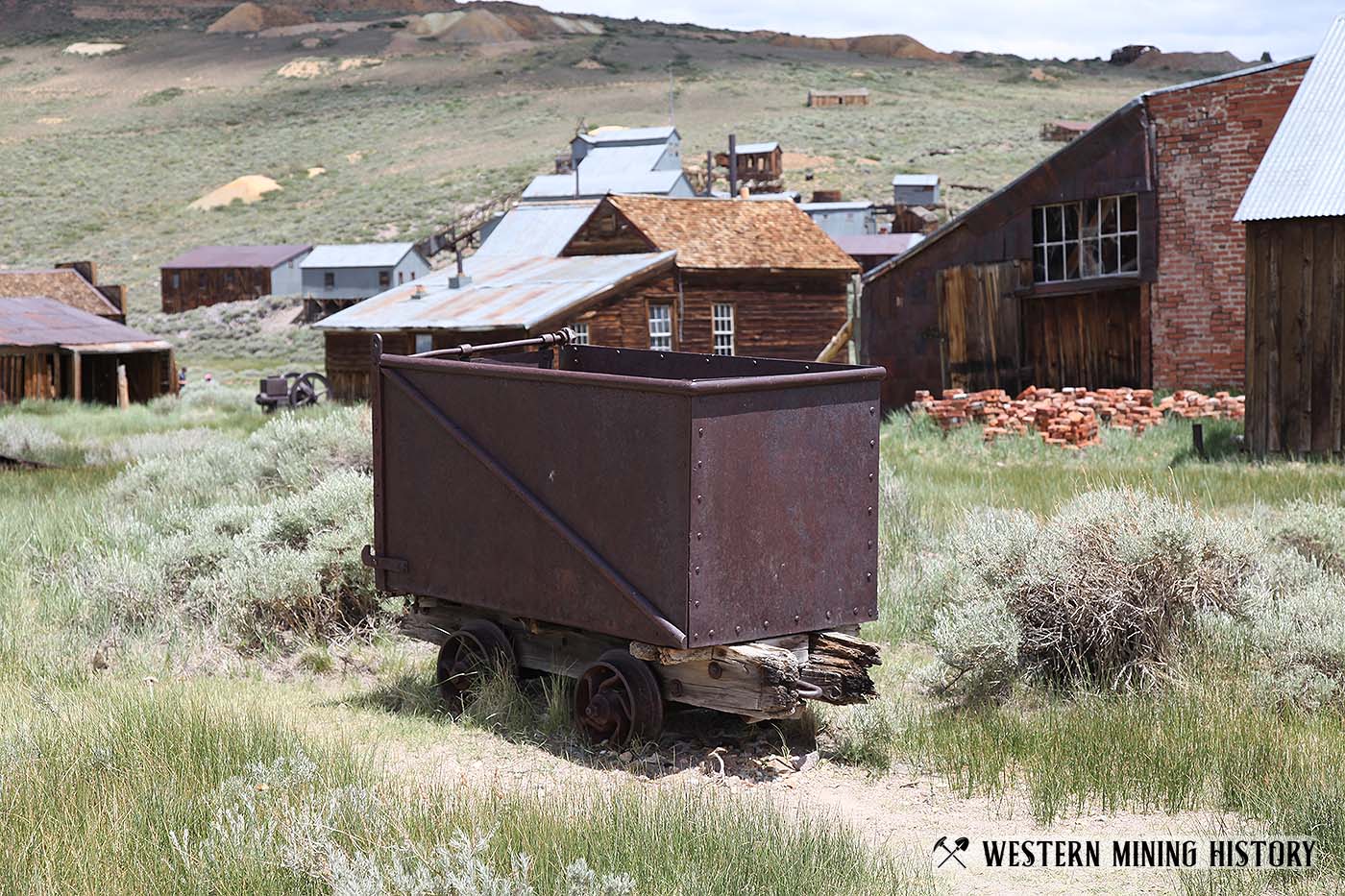 Ore car and buildings at Bodie

Many of the buildings still have furniture and belongings inside – peer through the curtains and it looks like the folks just got up and left it all behind one day. The dusty desks in the school house are waiting for a new generation of believers.