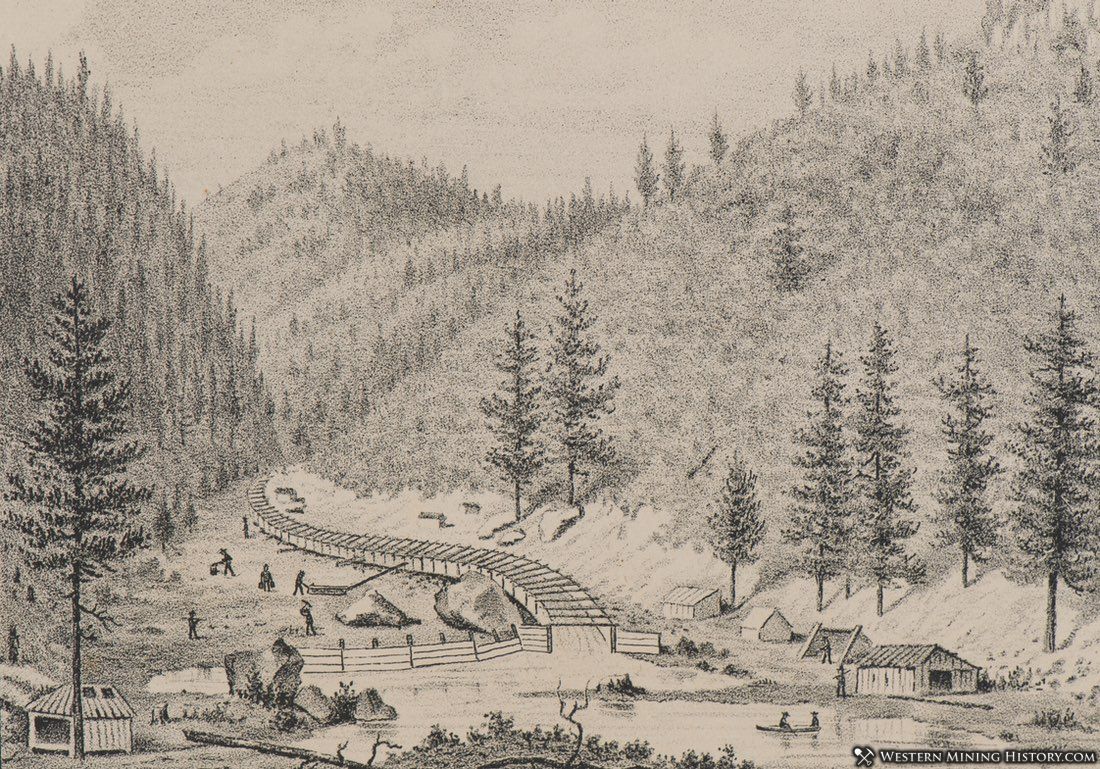 Illustration of Rich Bar in 1851

Rich Bar was the site of the largest gold discovery and mining camp resulting from the stampede into Feather River country in 1850. The excitement was the result of the search for the rumored "Gold Lake" which sent thousands of prospectors into the hills in search of a rumored lake full of gold. The lake was never found, but Rich Bar and other important discoveries were made by members of the Gold Lake expedition.

Some of the first prospectors on the scene were said to have retrieved thousands of dollars in gold from the rich placers in just the first few days. There wasn't enough ground to claim for the more than a thousand men that poured into the area during that first rush, so many moved on and made additional discoveries nearby.

Output from Rich Bar was estimated to be around $9 million between 1850 and 1890, and $23 million including the camps that were established nearby. 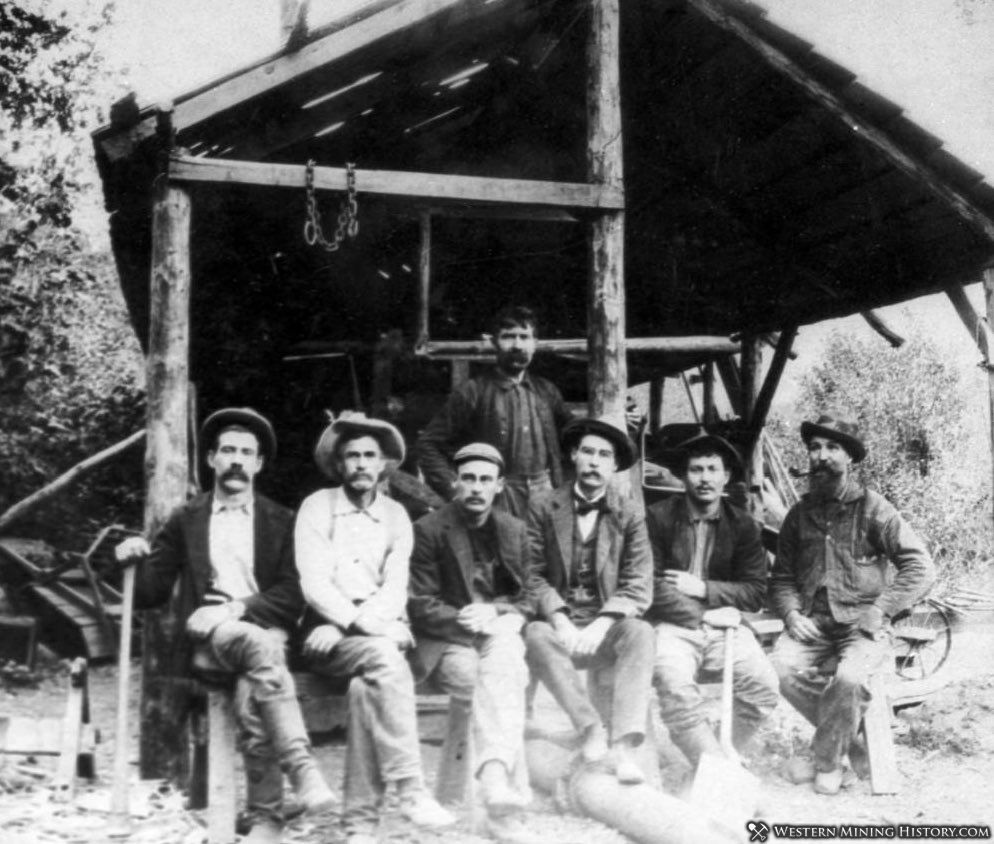 The earliest parties that infiltrated the upper parts of the Feather River did so at great peril from steep and rugged terrain, hostile Indians, and the threat of winter weather. An April 1, 1851 issue of the Sacramento Transcript describes conditions as reportedly 50,000 men attempted to reach the new diggings in the spring of that year:

THE GREAT RUSH TO THE NORTH
"Three Persons Frozen to Death. Mr. Augustus Knapp who is just down, gives as some interesting information relative to the situation of affairs at the diggings along Feather River. Mr. K. states that within the the last month it has been estimated that fifty thousand persons have passed Bidwell's Bar on their route to the Rich Bar, which is located on the North Fork of Feather River."

"From Bidwell's Bar to the Rich Bar the distance is about seventy five miles. Fourteen miles above the former bar the bodies of dead mules are first met with, and from that on up, the road is literally lined with dead stock --- hundreds of mules and horses which have perished in the the snow, having frozen to death. Some works ago three persons were frozen to death on this route, but no one lately, that we have ascertained."

"The route is entirely closed at this time, and Mr. K. says that he would advise no one to think of starting for that point under ten days from this time; and not then, unless the weather shall continue perfectly clear. There is a sufficient amount of provisions on the Rich Bar for the miners, but they are held at high prices, as it is impossible for any fresh supplies to get in for several weeks."

"We have been aware that the mass of mining interest has lately been going to the diggings along Feather River. Ever since the receipt of the intelligence from Scott's River and the Klamath country, which represented the mines there as paying poorly, the miners have been rushing to the Rich Bar on the North Fork of Feather River, but we had not the remotest idea that fifty thousand had directed their steps to that quarter of the state."

"It is without doubt the greatest crowd that has ever gathered into the same narrow limits since the mines in Calfornia have been discovered. That whole region of country abounds in gulches, and from tests made last fall it is conceded to be one of the richest spots in the State; but how fifty thousand persons will be able to work in such confined limits is a matter which we cannot solve."

"A gentlemen from there gives it as his opinion that twenty-five thousand persons might work with good success to themselves, but he fears that the number who are there now will find themselves much cramped and crowded in their operations. During this winter there has been but little digging on account of the snow. Whilst some have made out well, others have failed to do more than pay their current expenses." 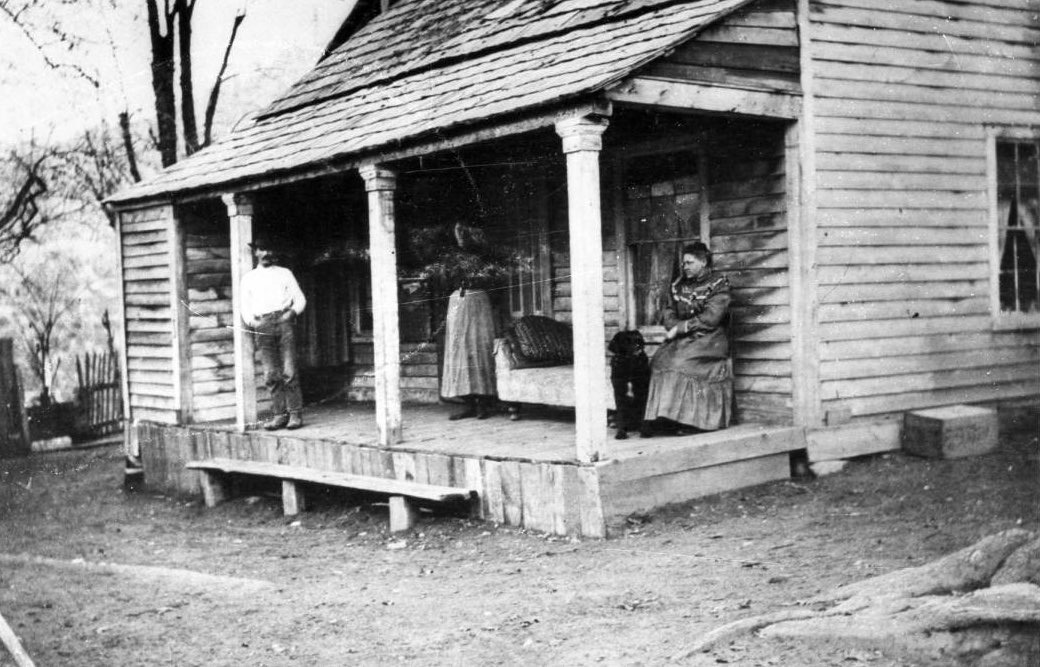 During the first couple of years, most miners did not attempt to winter high in the Sierra as conditions were too harsh and the camps were too isolated during this early date. The winter of 1852-53 was the first year that many miners attempted to stay at the diggings all year.

The winter storms were worse than anticipated and the camp found itself buried in deep snow and without enough provisions for the nearly eighty men that had remained. Seven chose to stay at the camp while over seventy attempted a nearly impossible trek out of the mountains to Bidwell Bar.

The trip was a harrowing experience characterized by bitter cold and hunger. Details of the exodus from Rich Bar are found in the 1882 publication "Illustrated History of Plumas, Lassen, & Sierra Counties".

Today Rich Bar is a Ghost Town and nothing remains of the original town except a cemetery.