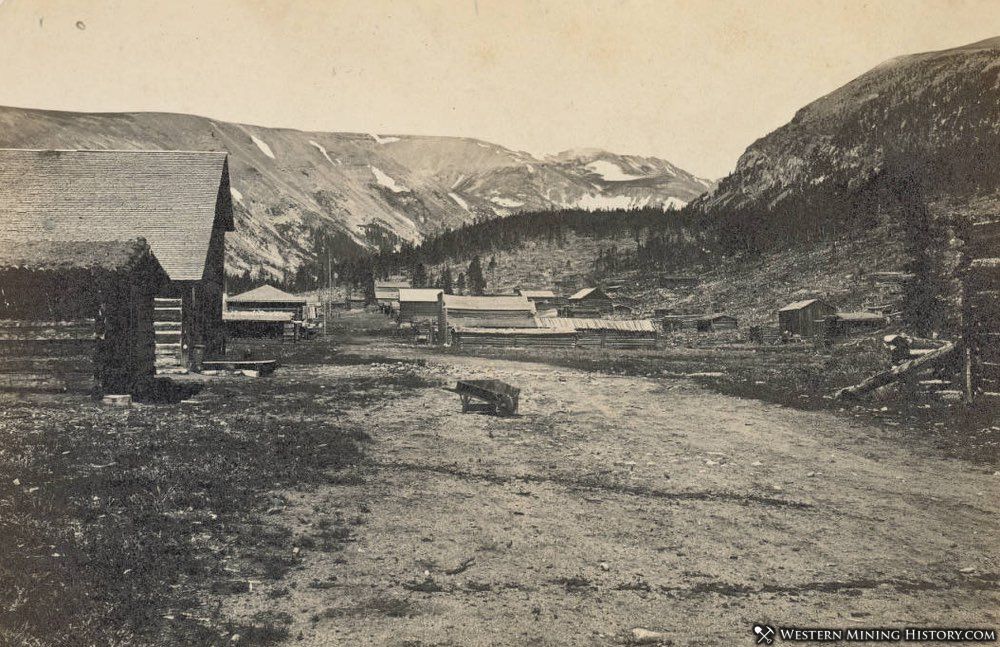 Buckskin Joe was the site of one of the earliest gold discoveries in the state of Colorado. Settled in 1860, the original name of the town was Laurette. A post office opened in 1861.

Most of the mining activity centered around rich gold placers and shallow lode deposits. These were largely worked out by the mid 1860s and by 1866 Buckskin Joe was said to be mostly deserted.

Buckskin Joe was the Park County seat from 1861 to 1866. Horace Tabor, who would go on to be one of the State's richest mine owners at Leadville, operated a store and was the postmaster at Buckskin Joe.

Buckskin Joe would later be the name of a wild west film set and theme park that operated near Canon City, Colorado from 1957 to 2010. The log general store building was said to have been Horace Tabor's actual store, moved from the former ghost town. Location of Buckskin Joe near Alma and Fairplay

The 1895 publication History of the State of Colorado details the early history of the camp (the rest of the text on this page is quoted from the book):

The discovery of gold which led to the founding of this district occurred in August, 1860, when Joseph Higginbottom, known as "Buckskin Joe," W. H. K. Smith, M. Phillips, A. Fairchild, D. Berger, David Greist and others found precious metals in the margins of the creek and along the gulch where the town is located.

These men formed a district, adopted laws for its government, and proceeded to develop their find. The place was named in honor of Higginbottom, taking his pseudonym of “Buckskin Joe." The stream was named for Mr. Fairchild.

The Phillips lode, which subsequently proved extraordinarily rich, was discovered in September following and named for Mr. Phillips. During the two years of its operation it yielded something over $300,000 from the surface decompositions. These extended to a depth of fifteen to forty feet, when iron and copper pyrites supervened, which, in due time put a stop to mining on that lode for the reason that the pyritiferous ores could not be successfully treated by the stamp mills located there. This deposit was the largest and most profitable that has been found in Park county.

Winter descends upon that region in October and prevails until May, hence little beyond preparatory work was done until late in the spring of 1861, when the district was reorganized, new laws were framed and adopted.

I. W. Hibbard was elected president David Griest, who had been elected recorder of claims in 1860, being absent, Jacob B. Stansell was chosen in his stead. Later on Griest returned, when much controversy arose over the office of recorder. It was settled by the resignation of both claimants and a new election, which resulted in the reinstatement of Stansell by a large majority. During this year all the neighboring gulches and mountain slopes were prospected, and many lode claims staked.

The original location certificate of the Phillips, filed in June, 1861, ran as follows: "Know all men by these presents, that we. Buckskin Joe & Co., claim 1,800 feet on the Phillips lead, and I, Buckskin Joe, claim the right of discovery."

Recorder Stansell was presented with claim No. 6 because he recorded the certificates without fees, and this proved the richest section of the lode. In October, 1861, a town company was formed, composed of I. W. Hibbard, J. B. Stansell, Miles B. Dodge and J. D. Stewart 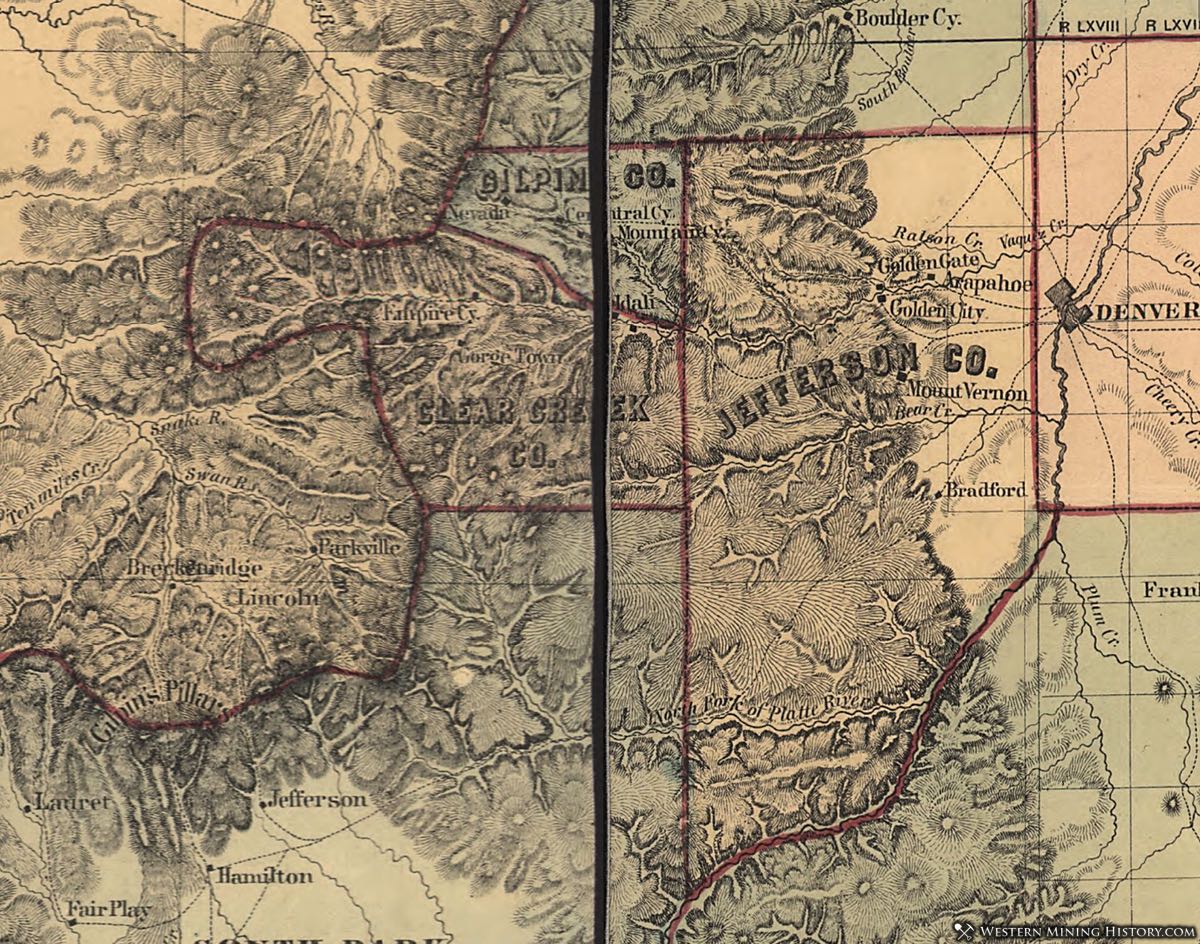 When the selection of a name for the town came under discussion, Mr. Stansell proposed that it be named for the only ladies in the camp, Mrs. M. B. Dodge and her sister, Mrs. Allen Dodge, and it was at once agreed to. The first was named Laura and the other Jeanette, therefore, to compliment both, they made a combination of the two, thus "Laur-ette."

The mining district has retained its original title to the present time. In June, 1862, still another reorganization took place, and a new code of rules and regulations was adopted. N. J. Bond became president, and George De Alby, recorder. The latter afterward enlisted in the Union army, served during the war, became a prominent officer and was transferred to the regular army at the final windup of the rebellion.

The extraordinary richness of the Phillips attracted about 1,000 people to Buckskin. In September, 1861, Charles M. Farrand brought in a stamp mill and began crushing surface quartz from No. 6 on the Phillips. Stansell sold a half interest in the claim to N. J. Bond, whom he had induced to locate there, for a like interest in a pair of mules, harness, wagon and a stock of provisions, the latter being then the more valuable consideration. They subsequently bought claims No. 3. 5 and 7, which also proved quite productive.

Hart Harris, who came in about that time, bought a half interest in those of Stansell and Bond, and made considerable money. Stansell and Bond commenced sluicing from the surface on the 18th of June, 1861, and from that time to October 19th took out $30,000 in gold. Claims under the old mining law were 100 feet in length, the discoverer being entitled to 200 linear feet of the vein, with suitable allowance for dumpage.

Between September, 1861, and the summer of 1862 there were nine stamp mills, with a total of seventy-eight stamps, and ten or twelve Mexican arastras at work crushing surface ores, and some three hundred men were employed in and about the town.

In January, 1862, a small weekly newspaper, which had been published at Tarryall by Matt Riddlebarger and W. L. McMath, was moved to Buckskin and there issued until November following, when it suspended. The first capital of Park county was established at Tarryall, in 1861, by Governor Gilpin, but was never held there, the offices being located at Laurette and their business conducted there.

The first term of the district court was held in a building owned by Stansell, Bond and Harris; Chas. Lee Armour presiding. The town of Laurette had fourteen stores, two hotels, many saloons, a theatre, and other lively institutions.

This epoch of prosperity continued until the fall of 1863, when the exhaustion of the richer decomposed quartz caused general desertion, and a year later it was almost depopulated.

It was here, in the summer of 1864, that I first met H. A. W. Tabor, who, then the proprietor of a small grocery store, fifteen years later became one of the celebrities of the nation, under circumstances that have been recounted in another part of our history. In 1866 the county court was removed from Laurette to Fairplay.