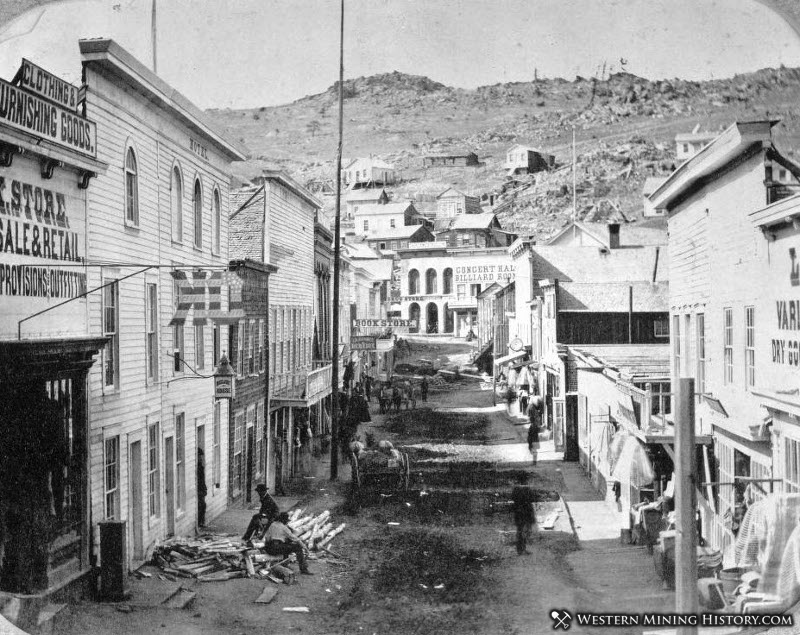 In 1859 John Gregory discovered gold in what became known as "Gregory's Gulch", near the present day site of Central City. The Gregory's Gulch discovery is among the first important gold strikes in Colorado.

Many camps were initially formed in the gulch as thousands of miners arrived at the rich placer diggings. Eventually these communities were consolidated into three main towns - Black Hawk, Nevadaville, and what was originally just known as "Central" as it was at the center of the district. Central would become Central City and was the primary settlement of what would be known as "The Richest Square Mile on Earth".

Central City was Colorado's largest city for a number of years. Even after Denver surpassed it in population, Central City remained Colorado's economic center into the 1870s. This mining metropolis was visited by many of the world's most important people, including President Grant, Grand Duke Alexis of Russia, and numerous important government figures and celebrities from around the world. 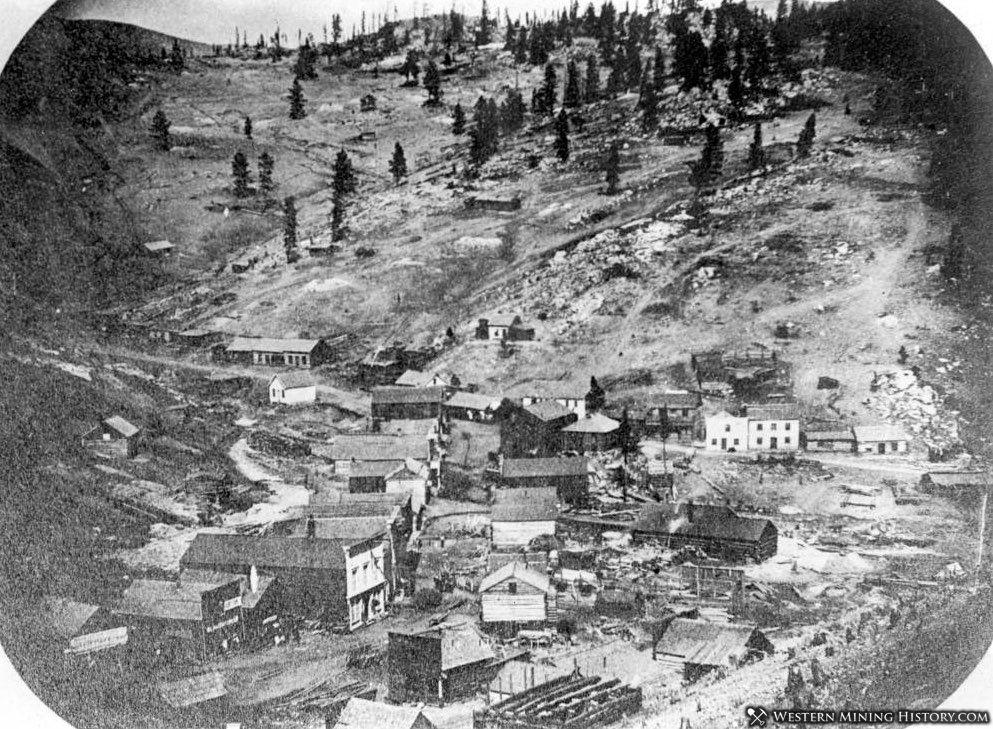 The Difficult Transition to Lode Mining

By the early 1860s, the placer diggings in Gregory Gulch began to run out and more attention was placed on developing lode mines. While lode mining did keep the district active, many difficulties were experienced that slowed mine development through much of the 1860s.

The ore deposits of Colorado were complex and required smelting processes that were yet to be developed at this early date. The result was that the independent miners that struck it rich at Gregory Gulch placer mines had difficulty transitioning successfully into lode mining. Many of the early pioneers that had built the district became disillusioned and either headed home back east, or set out prospecting in the hope of finding the next big strike.

What Gregory Gulch needed was outside capital, machinery, and experienced men that could solve the district's hard-rock woes. Unfortunately the onset of the Civil War made these resources scarce just as they were needed, and the district languished for several years as the war in the East consumed the nations resources and attention. 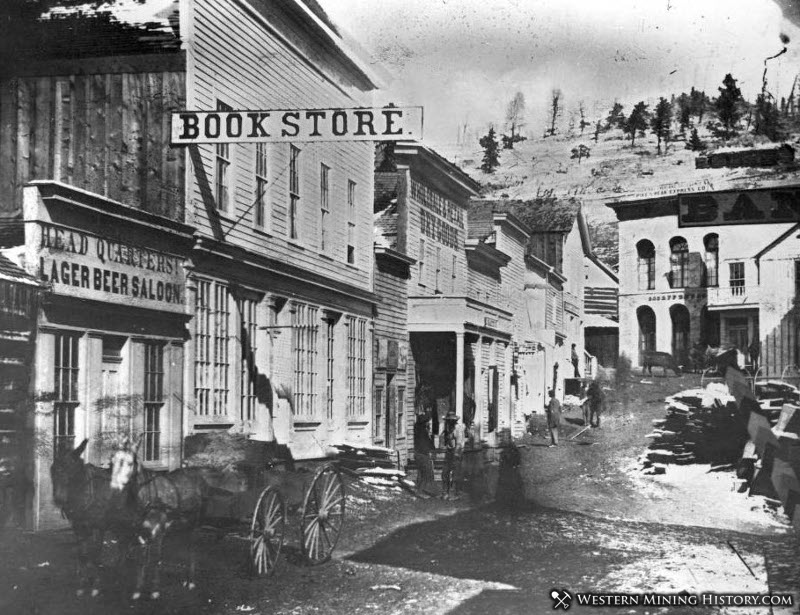 Despite the difficulty of the war years, the rich deposits of the district would keep Central City and the other gulch towns alive through these difficult times, even as other towns in Colorado were abandoned. Placer deposits were not yet entirely depleted, and hard rock mining was still advancing even if the available reduction techniques were inefficient. 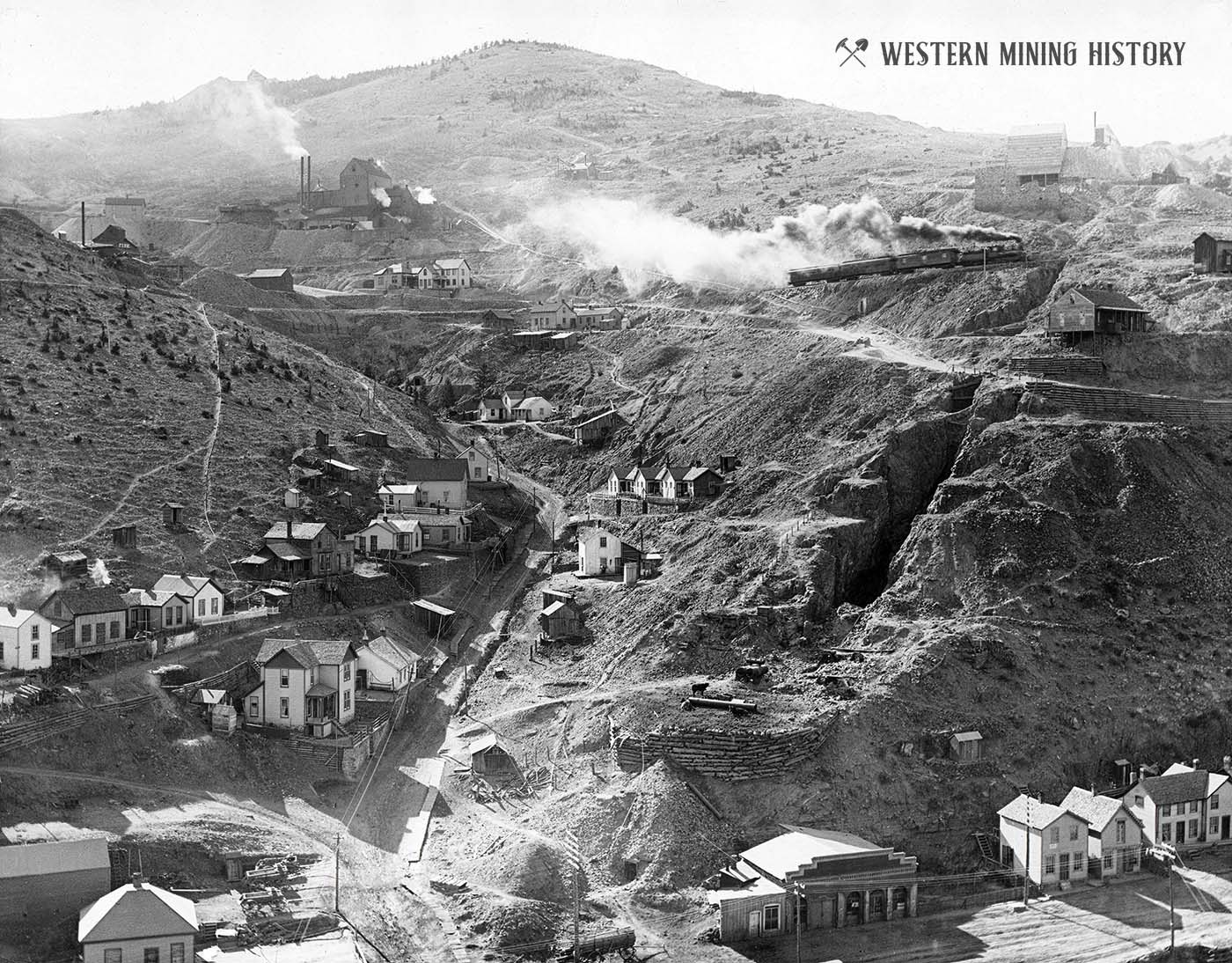 Mountain City section of Central City ca. 1880s. Mountain City was one of the original settlements in Gregory Gulch and had a post office 1860-1869. It was eventually absorbed into Central City.

In the years after the Civil War ended, eastern capital began to flow again and investors were eager to get into the Colorado mining scene. Many of the top producing mines were bought my investors and company men were sent from the East to manage the gulch mines.

The problem of efficient ore reduction remained, but by the late 1860s smelters were being operated in the gulch that used new techniques that proved revolutionary in the treatment of Colorado ores. The result was a boost to the mines of the gulch, and the establishment of Black Hawk as Colorado's first smelting center. 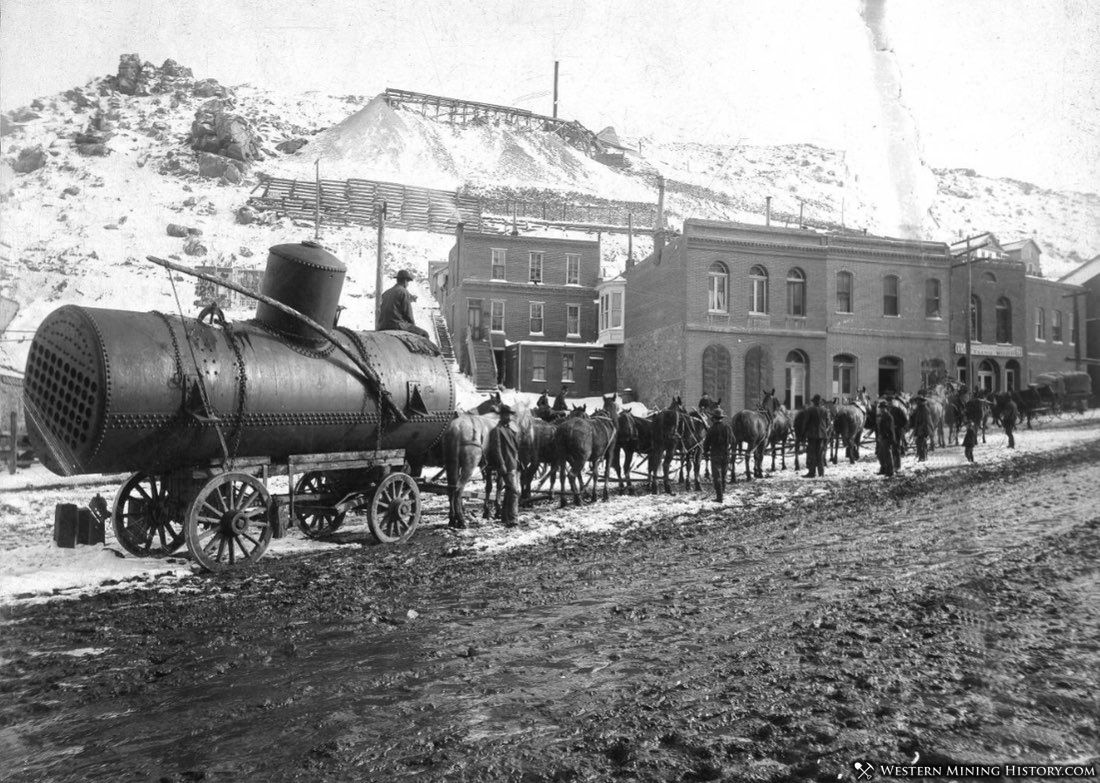 Central City was born as a placer mining town and struggled for years to transition successfully to hard-rock mining, but by the late 1860s the town and district were established as Colorado's first great lode mining district and smelting center. The future was bright for Colorado's original mining empire.

The 1870s were a prosperous and exciting time for Central City. The mines of the gulch were producing steadily. The "Richest Square Mile on Earth" continued to be Colorado's premier mining district and Central City was still Colorado's economic center, even if Denver had surpassed it by population.

Central City's prominence both in Colorado and around the country resulted in it becoming a center of both culture and industry, unusual among mining camps at time. Many of the mine owners, managers, and other business owners were educated and often from elite Eastern families. This element of "society" would shape much of Central City's history, a topic that was covered in some detail in Caroline Bancroft's excellent book Gulch of Gold - A history of Central City, Colorado. 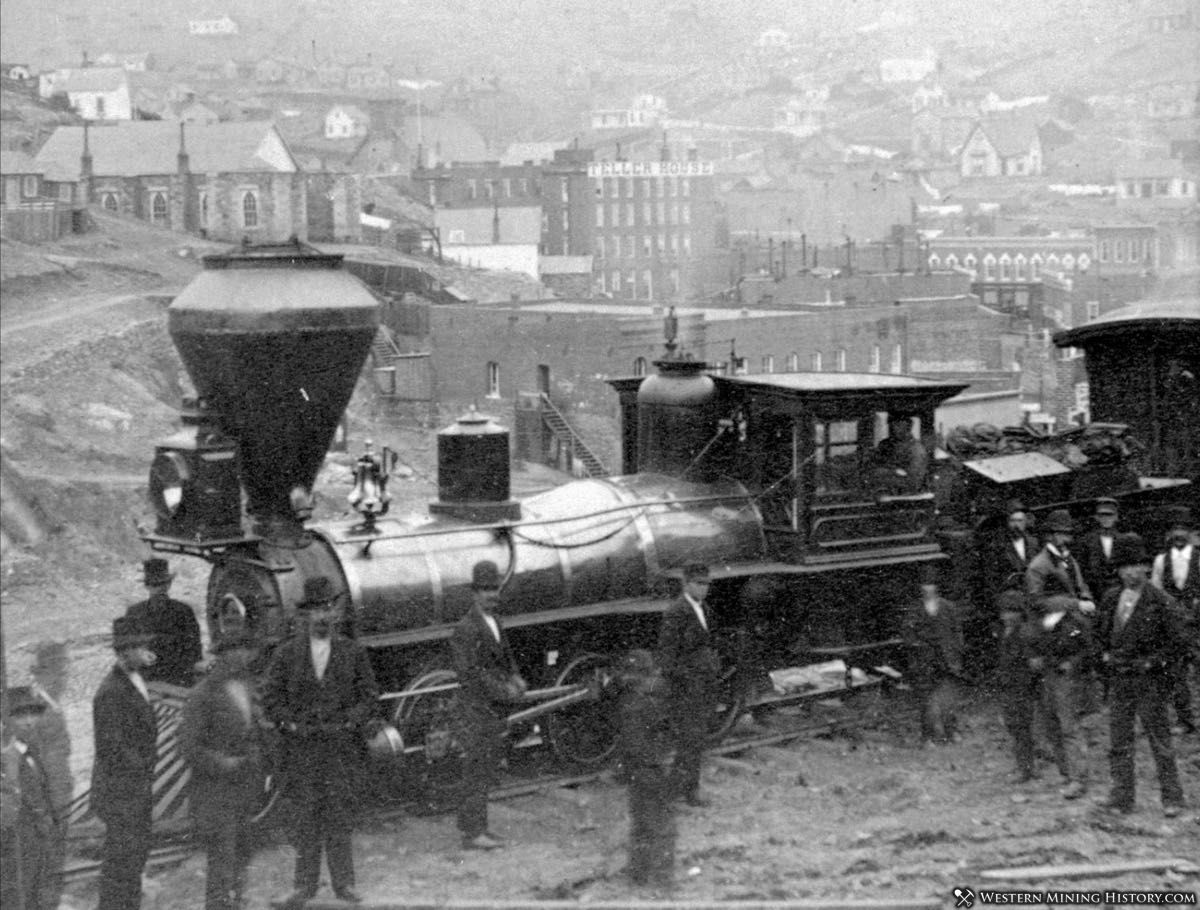 Arrival of the railroad at Central City, Colorado 1878

Central City had already experienced fires, but it was the fire of 1874 that had the greatest impact on the town's history. The great fire destroyed most of the business district, around 150 buildings, most of them wooden buildings built during the previous decade. The gulch mines were surging at the time, and Central City was entirely rebuilt in a matter of months, this time with substantial buildings of brick and stone, many of which still stand today.

Central City's society had a long history of theatrical performances. This interest in theater culminated in 1878 with the construction of the Central City Opera House, a magnificent stone building constructed by Cornish miners. The building was a triumph of design and craftsmanship, and it solidified Central City's reputation as the cultural capital of the Colorado mining districts. 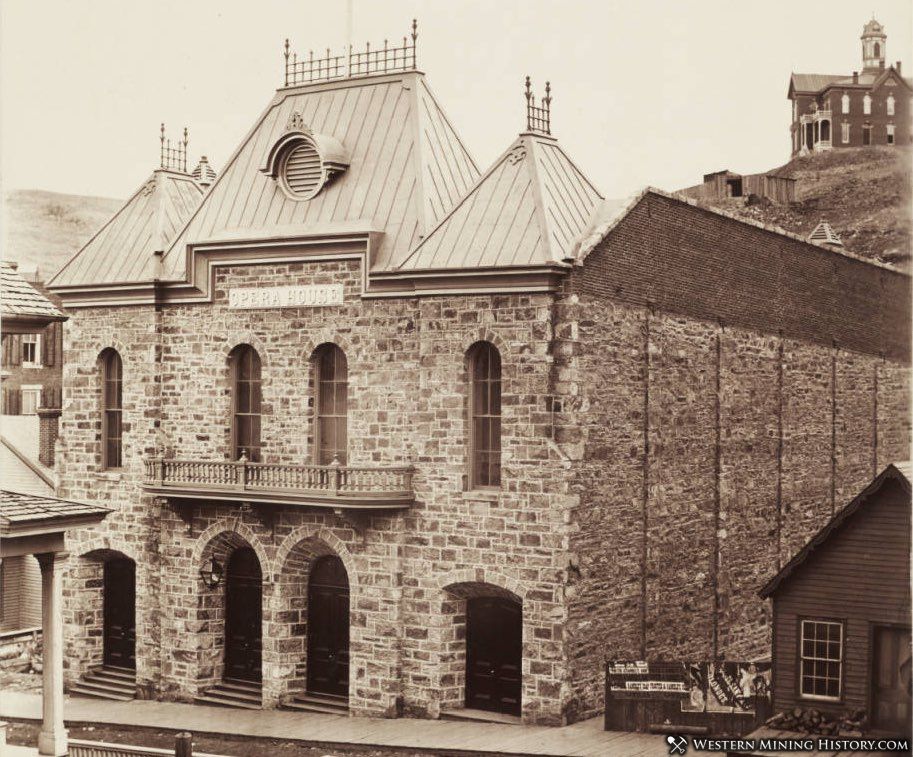 Unfortunately, Central City's reign as Colorado's mining center was about end, and the grand opera house would only shine for a few short years. The building would endure however, and ultimately would shape Central City's history more than any single building defined a Western mining town.

1880 is the year that Central City lost its status as Colorado's leading mining center, not because its mines were waning, in fact the mines of Central City were producing more wealth than ever. What happened is Leadville.

The bonanza at Leadville was at a scale not before seen in Colorado. While Central City mines produced more wealth in 1880 than any prior year, Leadville produced over 5 times as much. Other silver districts were also experiencing a boom, casting further shadow on Central City's production.

Many of town's elite began moving to where the fresh excitement was. Prominent citizens moved to Leadville and took their businesses with them. Some relocated to Aspen. Yet others would relocate to the numerous new mining areas that were becoming prominent throughout the state.

The spectacular mines of Leadville became the place to invest, and capital for development of Central City mines became scarce, resulting in a drop in production of fifty percent by 1883.

With great riches coming from other districts, the gulch was no longer positioned to be an effective smelting center and smelters were relocated to Denver. Prominent smelter owners and engineers departed Central City to be at the new facilities. 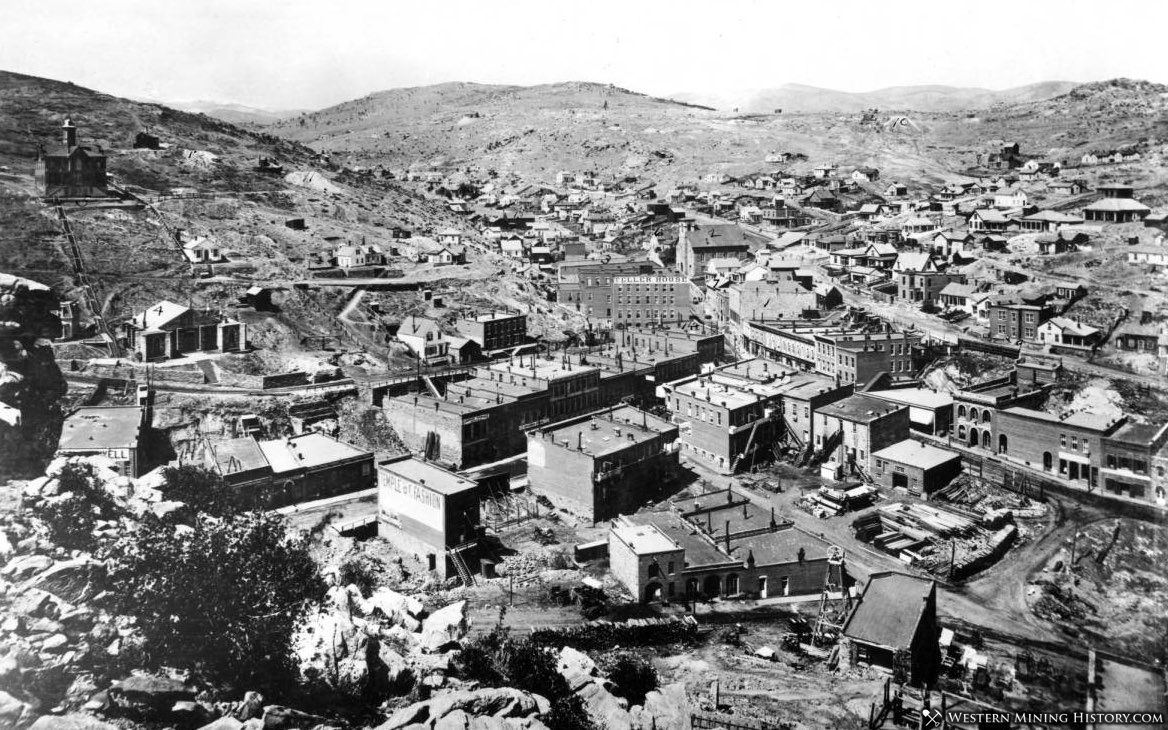 One after another, the people that built the great institutions of Central City were leaving for greener pastures. With cultured society exiting the gulch, interest in the theater waned and by 1882 the opera house was in financial trouble. The theater managed to hang on, although with audiences now being primarily miners it became a venue with minstrel shows, boxing matches and the like. Central City's renowned theater productions came to an inglorious end.

Central City would would have the last laugh however as the Gilpin County mines rebounded even as the great silver districts declined after the silver crash of 1893. By the 1890s the district's mineral production was once again at record levels, and Central City's population reached an all-time high. 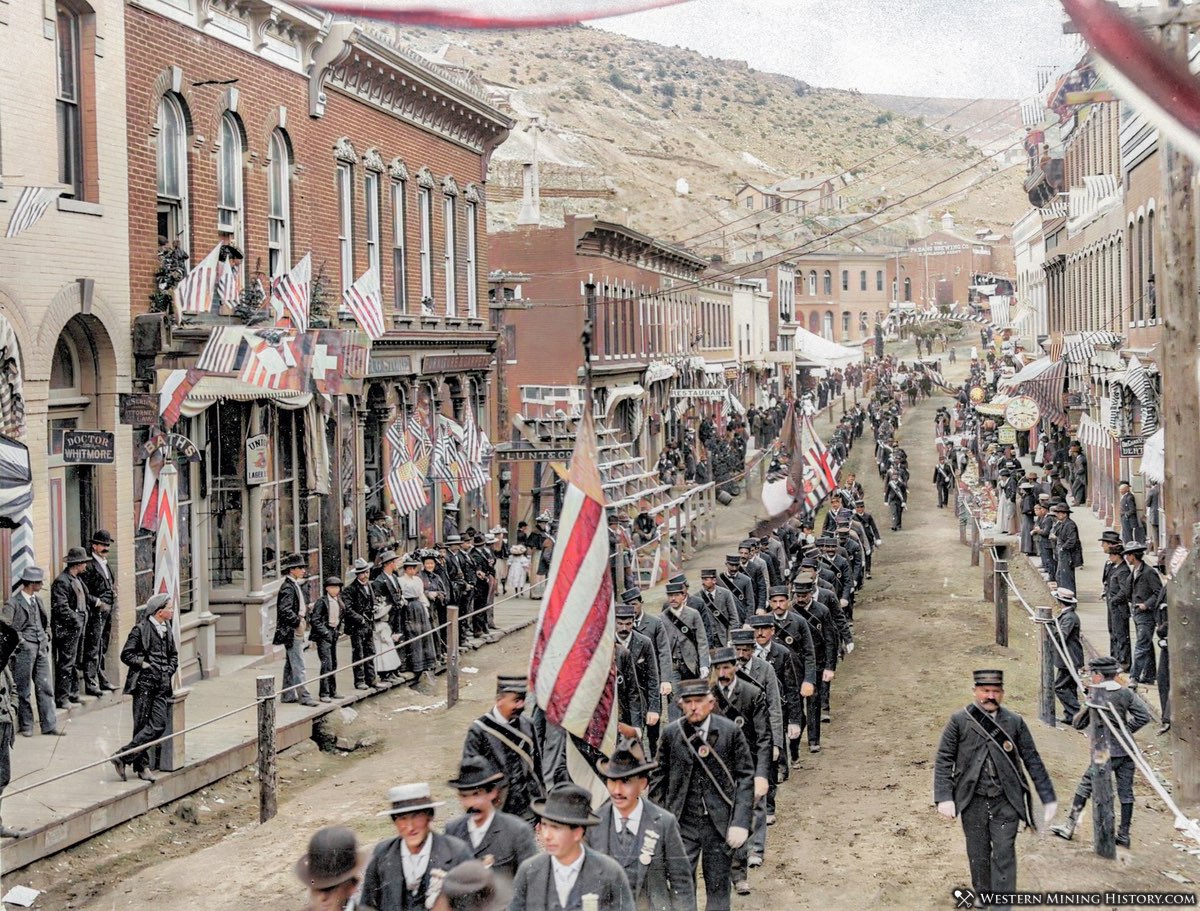 Despite increased production at the mines, Central City would never again hold its prominent position in Colorado. In the 1870s Gilpin County mines produced fifty percent of Colorado's mineral wealth. In the 1890s, that number was just five percent. Many districts were producing in Colorado now and Central City became just another mining camp.

While Central City's diverse ores and deep mines made it one of the West's longest and most consistent producers, the Gilpin County mines couldn't continue to operate indefinitely. The World War I years marked the end of prosperity for The Richest Hill on Earth.

With dwindling mine production, the towns of Gregory Gulch were rapidly losing population. By 1925 the population of Central City was down to just four hundred, with just two hundred at Black Hawk and ten lonely souls in Nevadaville.

Conditions improved somewhat during the 1930s. The Great Depression drove desperate men to once again operate long-abandoned placer mines in the gulch. The price of gold increased from $20 an ounce to $35, allowing for some of the deep mines to reopen.

Like most gold districts, World War II signaled the end of the mining industry. The federal government ordered non-essential industries to be shut down, and this included the gold mines of the gulch. After eight decades of mining, the Richest Square Mile on Earth was finally quiet.

The Opera House to the Rescue

Ads previously mentioned, the Central City Opera House would play a significant role in the long-term history of Central City.

The iconic building was used as a motion picture theater from 1910 until 1927 when it was finally closed down permanently. The building sat empty, in disrepair, until a chance encounter changed the fortunes of both the building and the depressed town. 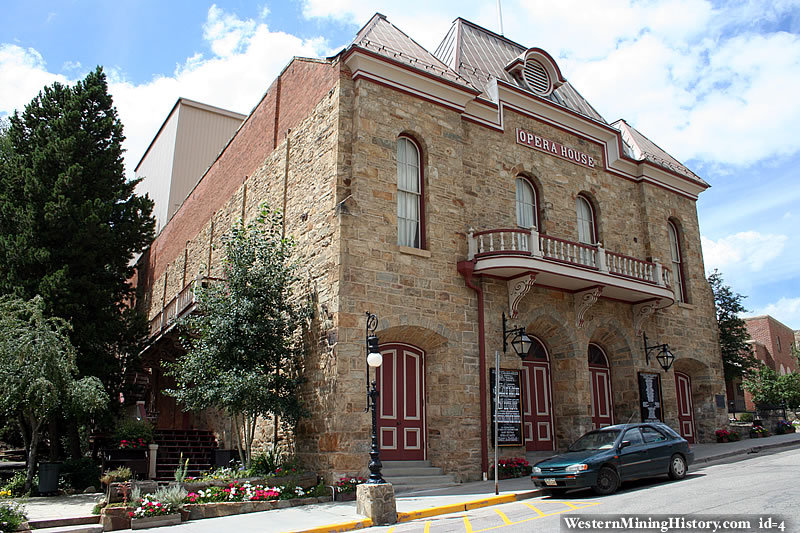 In 1929 Theater Director Walter Sinclair of New Orleans was vacationing in Colorado and he stumbled upon the boarded up Central City Opera House. Enamored with the building, Sinclair could not stop talking about it and in an incredible stroke of luck he happened upon the current owner of the theater, Ida McFarlane.

Sinclair convinced McFarlane that the theater was something special, and needed to be preserved. In 1931 the building was gifted to the University of Denver in May of 1931, and the newly formed Central City Opera House Association organized efforts to restore the dilapidated building.

At the same time the Central City Opera Company was formed to produce new theatrical performances. The summer of 1932 saw the reopening of the opera house with a new performances and a festival that lives on to this day.

The reopening of the theater had a significant impact on the future of Central City. At a time when the mines were fading and the city was losing its historical treasures, the opera brought back some of the culture that had defined Central City in the first two decades of its existence.

The impacts were immediately felt. Tourism jobs brought back part of the economy that was lost when the mines closed. Writers and artists took interest in the town and bought summer homes. Attention was turned to historical preservation at a time when the attitude was to modernize or simply tear down historical structures. 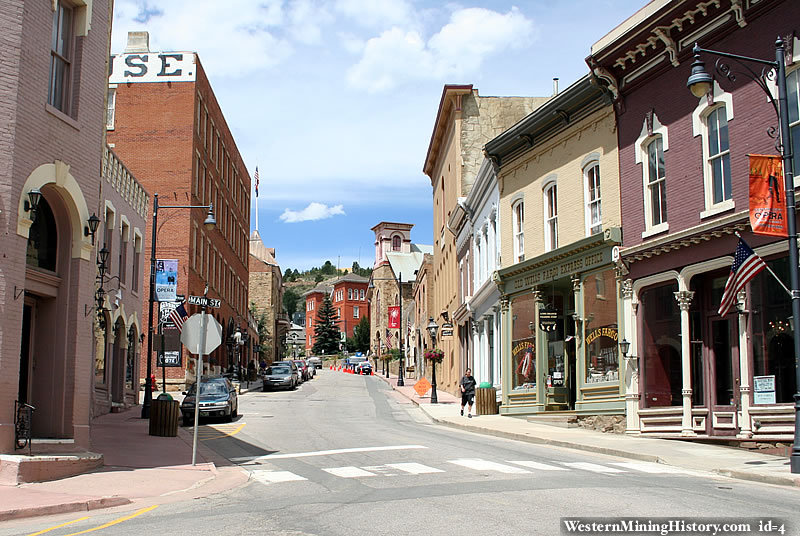 The Central City Opera organization now owns and maintains twenty-eight historic properties. The summer festival at the opera house continues to be a popular event. Gambling was legalized in the towns of Central City and Black Hawk in the 1990s and casinos are now an important part of the local economy.

Thankfully due to preservation efforts going back to the Great Depression, an incredible amount of history has been preserved at Central City. It is one of the West's best mining town destinations.

Coasting in Colorado (1884 New York Times)
This article describes a tragic accident in Central City, Colorado in the early 1860s. "Once started in them at Nevada, a sled, unchecked, would fly to Black Hawk without giving one time to say "goodday” to any acquaintance he might pass in Central. It was like being shot out of a catapult or dropped down an elevator-shaft."