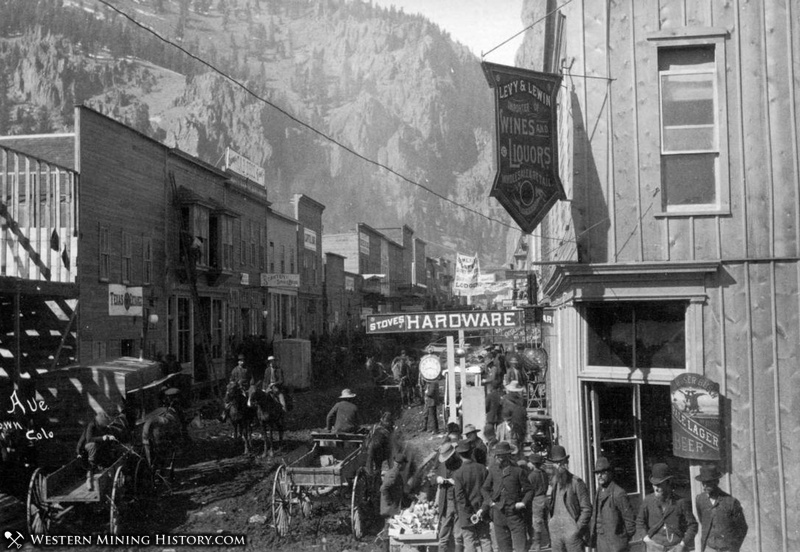 Nestled in a narrow canyon with steep walls near the headwaters of the Rio Grande is the town of Creede, Colorado. Although its boom time was short, some significant Old West figures called this place home. From tourism to silver mining and back to tourism, Creede is certainly no ghost town.

Members of the Ute Tribe would wander through what would become Mineral County and Creede, Colorado in search of game. After natural hot springs were found here by white settlers, the natives began to be pushed out. Several small towns were built as resorts to serve the hot spring tourists. 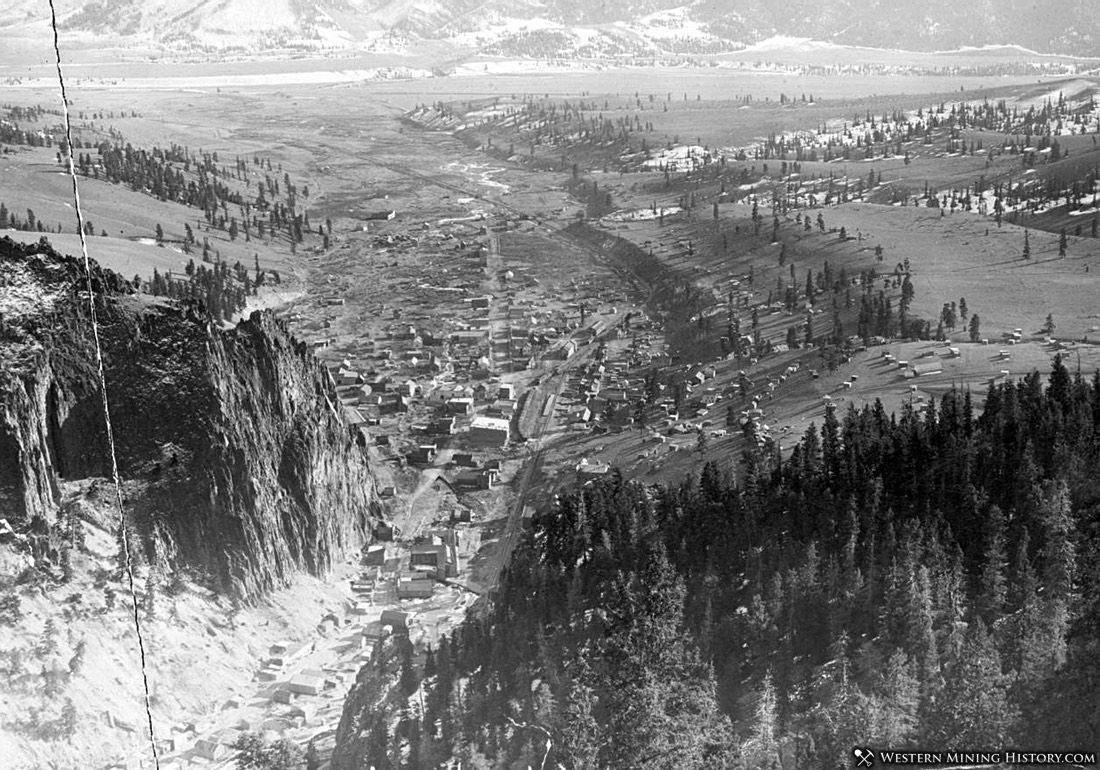 In 1883, the Denver and Rio Grande Railroad was completed, bringing in hundreds of tourists a day into the area, and setting the stage for major immigration.

The year 1890 would begin the real influx of white settlers to the Upper Rio Grande Valley. Nicholas Creede and his partner were out prospecting when they stopped for lunch. After eating, Creede chipped off a piece of the boulder he had been sitting on, revealing blossom rock, which is capable of bearing large amounts of silver. When Creede realized what he found, he uttered the words, “Holy Moses”. An eighty foot shaft was dug and christened the Holy Moses Mine.

Creede had the material he dug out assayed at $80 to the ton. He sent word to David Moffat, a major railroad investor, for financial backing to develop the mine. After Moffat was satisfied with the potential yield, he sent $1,000 to Creede and then began to raise what would become $70,000. Captain L.E. Campbell of the U.S. Army at Fort Logan and Sylvester T. Smith, the General Manager of the Denver and Rio Grande Railroad, became investors and formed the Holy Moses Mining Company. 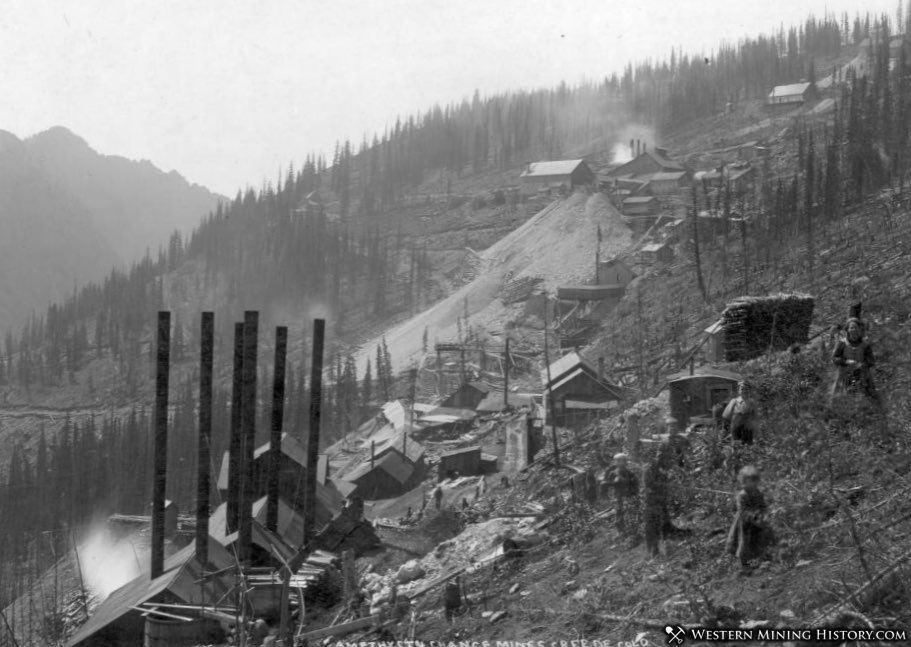 Creede soon found a second silver vien, which he named Ethel, and other prospectors came to the area and found even more. As mining operations ramped up, word got out around the state of the silver finds.

Prospectors, miners, and merchants soon flocked to the area and began to set up tents in Willow Creek Canyon, a winding cut in the mountains with sheer cliff walls on either side. The first tent town was named Jimtown, but some residents referred to it as Gin Town for the beverage which seemed to flow freely in the camp.

By 1892, there were thirty saloons in the camp. Soon other tent towns such as Stringtown, Amethyst, Spar City, Stumpton and Weaver popped up in the canyon. 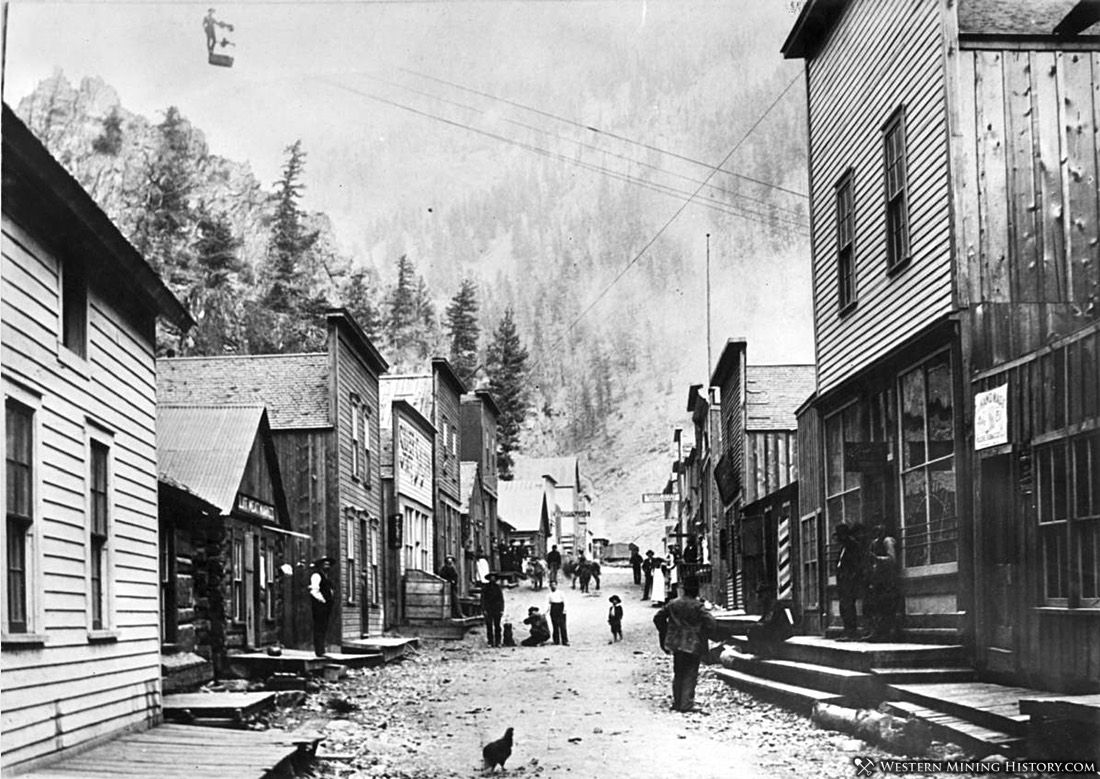 David Moffat attempted to convince the other executives on the Denver and Rio Grande Railroad to build a spur line to the canyon to haul in supplies for the hungry miners, and to haul out the ore they were extracting. Moffat’s plan was rejected by the other board members, so he resigned his position and financed the spur himself. After getting back his investment and making a nice profit, he signed the line back over the Denver and Rio Grande Railroad.

Willow Creek Canyon, with a canyon floor of just around six-tenths of a square mile filled up with people. It is estimated that at its peak, around 10,000 people resided there. Often, the canyon walls themselves made up the back walls of the tents. Buildings had to be built on stilts over Willow Creek. In the Spring, flood waters swept many of these buildings into the Rio Grande and several fires ripped through the crowded town. After each disaster, residents worked to rebuild what was lost. 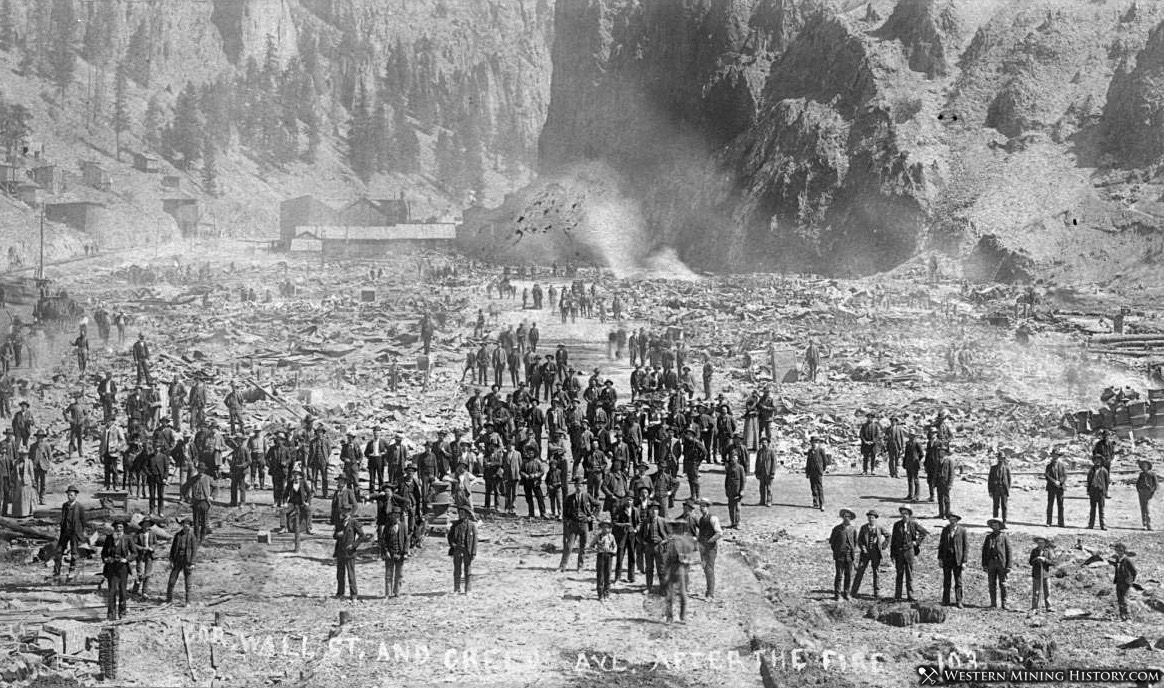 Creede after the June 1892 Fire

While people were flocking to what would later be incorporated as the town of Creede, the City of Denver was cleaning up its lawless element. Many of Denver’s criminals fled from prosecution and settled in Creede. Among the bad crowd was Jefferson Randolph Smith II, better known as “Soapy” Smith. Soapy got his nickname from a con in which he sold bars of soap with prize money of $100 hidden in the wrapper. Many people bought the bars of soap hoping to win the prize, but it was set up so only members of Soapy’s gang would get the money. 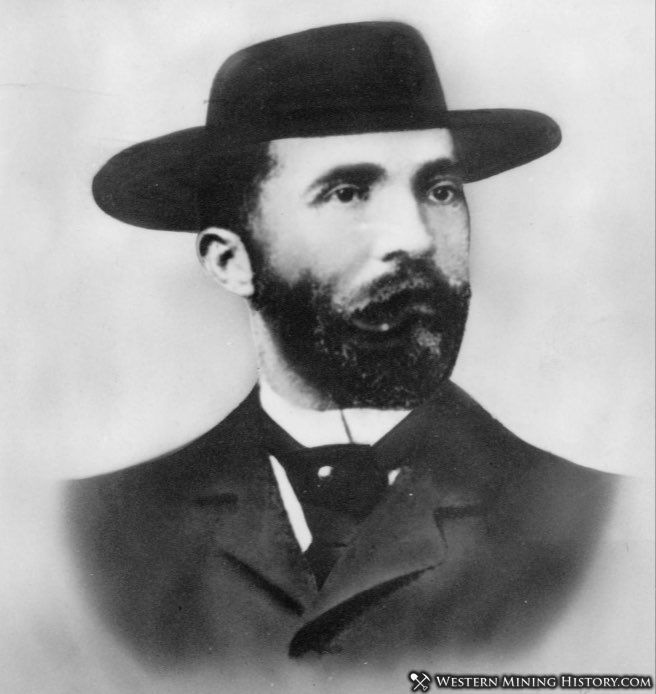 Soapy’s skill as a confidence man put him at the head of the criminal syndicate in Denver. He ran many of the gambling operations in the city where his poker tables and shell games seperated many men from their money. In 1892, Denver’s leaders sought to close the gambling dens. When the heat turned on, Soapy gathered several of his gang and moved to Creede. There he obtained leases at several of the establishments on Main Street, and started to build his next criminal empire.

Although Creede had a reputation for being less violent than other camps, violence did happen. An assasination attempt inside of Soapy’s own club, The Orleans, left one of his friends with both of his thumbs blown off. The most significant death to happen in Creede, Colorado was that of Robert Ford.

Ford was a member of the infamous James-Younger Gang, led by outlaw Jesse James. In 1882, while in Jesse’s home in Missouri, Ford shot Jesse in the back of the head, killing one of the most famous figures of the old west. Ford was convicted and sentenced to hang for the murder, but was spared by the Governor. 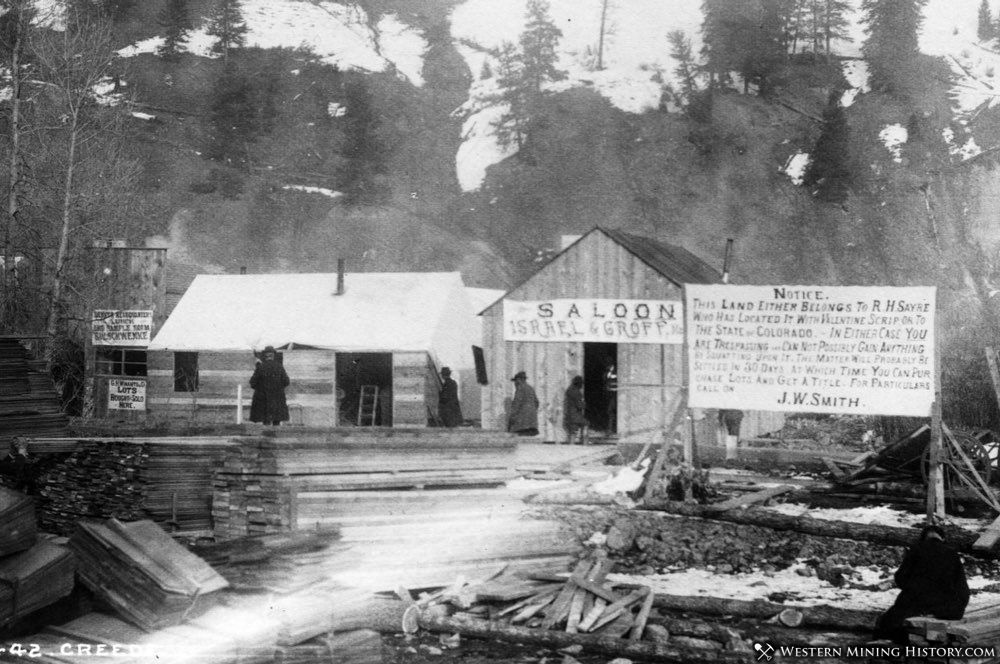 This ca. 1892 photo of Creede has a sign with reference to Soapy Smith. Perhaps this was one of his scams as an effort to claim town lots for his gang. The sign reads "This land either belongs to R.H Sayre who has located it with Valentine Scrip or to the State of Colorado. In either case you are trespassing and can not possibly gain anything by squatting upon it. The matter will probably be settled in 30 days, at which time you can purchase lots and get a title. For particulars call on J.W. Smith"

Because of the unpopular nature of his crime, Ford had to flee Missouri and ended up settling in Creede where he built a saloon and became a member of the Soapy Smith Gang. In June of 1892, a major fire ripped through Creede’s business center destroying many buildings including Ford’s saloon. Some residents blamed the already unpopular Ford for the fire, but Ford was not deterred, reopening his business in a tent.

On June 8, 1892, a miner named Edward O’Kelly walked into the tent saloon. Ford’s back was turned, so O’Kelly called out his name. Ford spun around and into the dual blast of O’Kelly’s double barrel shotgun. Ford died instantly and was initially buried in Creede, and then moved to his home of Missouri. O’Kelly was charged with the murder, but Soapy helped get him off by convincing the townspeople he was a hero.

O’Kelly was killed by a policeman in 1904. Soapy Smith met a similar violent end while facing down a crowd of vigilantes on the docks of Skagway, Alaska while building his third criminal empire. Two other Old West icons who resided in Creede during its heyday were Bat Masterson and Calamity Jane.

While the drama of a mining camp was unfolding in town, the mines just kept producing. Everytime a prospector found silver, he sold his stake to a mining company that would bring in scores of men working 12 hour shifts. As the miners dug deeper and deeper, they would inevitably strike water, flooding the tunnels. Even more men were employed by pumping companies to keep the miners in work. 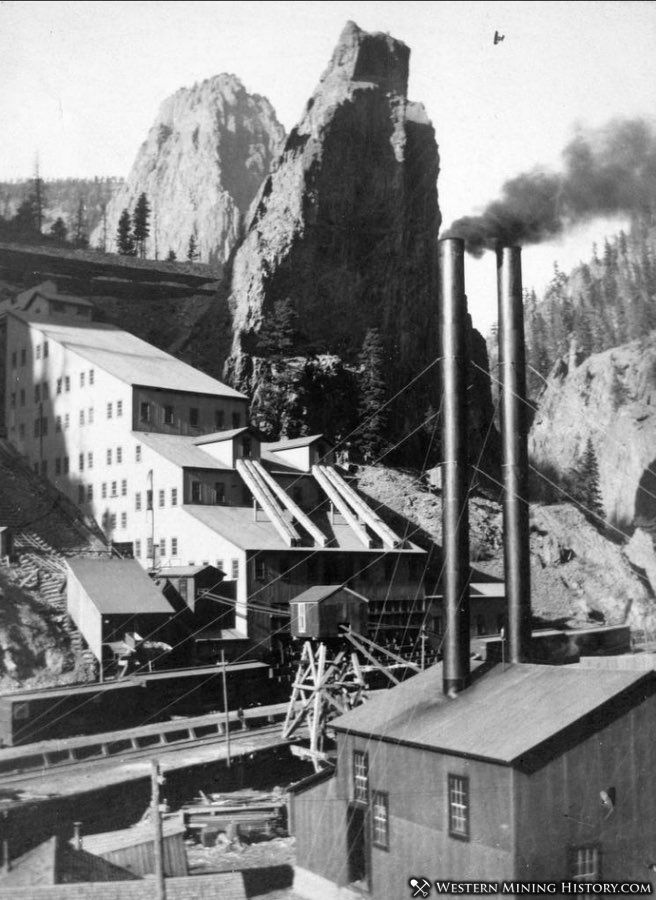 Humphreys Mine near Creede, Colorado

The King Solomon mine produced five million ounces of silver in 1892. Gold and zinc were also found in the area, but not in the quantities silver was.

But the boom time for Creede would be very short lived. In 1893 the great silver crash resulted in a nation-wide depression. The price of silver dropped making mining the metal a losing venture. Nicholas Creede had already moved on with the money he earned and eventually went to Los Angeles where he died of a morphine overdose a few years later. 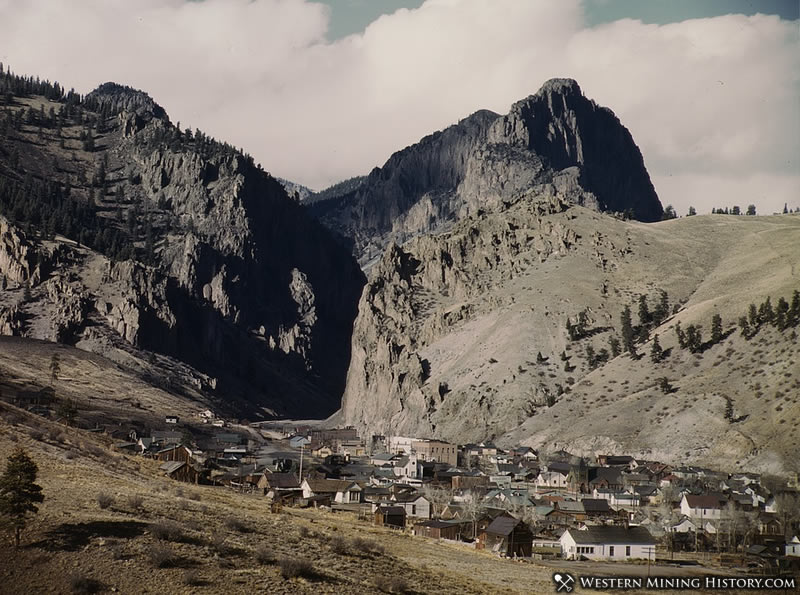 People began to empty out of Creede to look for other sources of income. The population dropped by some 2,000 people in less than a year. Some hardrock mining did continue, and Creede never became a complete ghost town. In the 1920’s many of the old mines were reopened, and by 1935 some 500,000 pounds of silver were being hauled out of the area every few weeks. The Homsetake Mine, the last remaining one in the area finally closed in 1985. 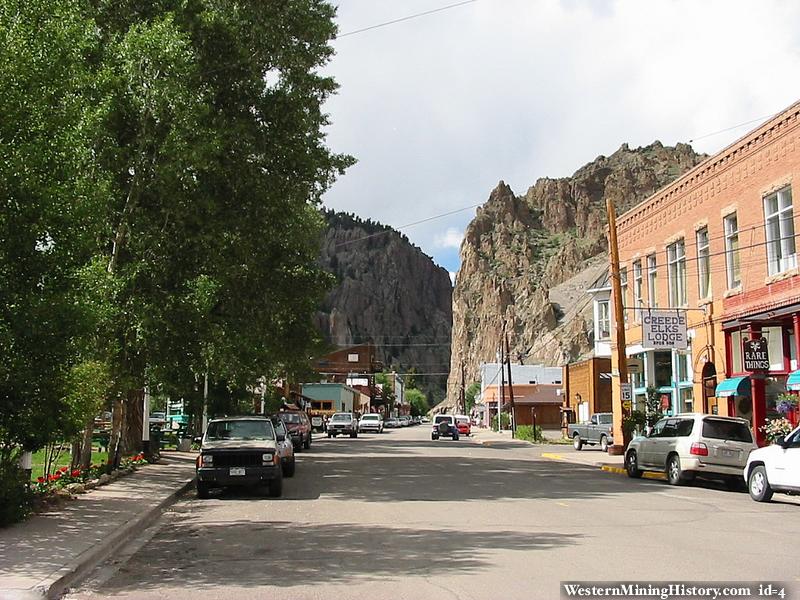 Today, Creede has returned to its roots as a tourist destination, including restaurants, hotels, and year round activities. It has around 250 year round residents.