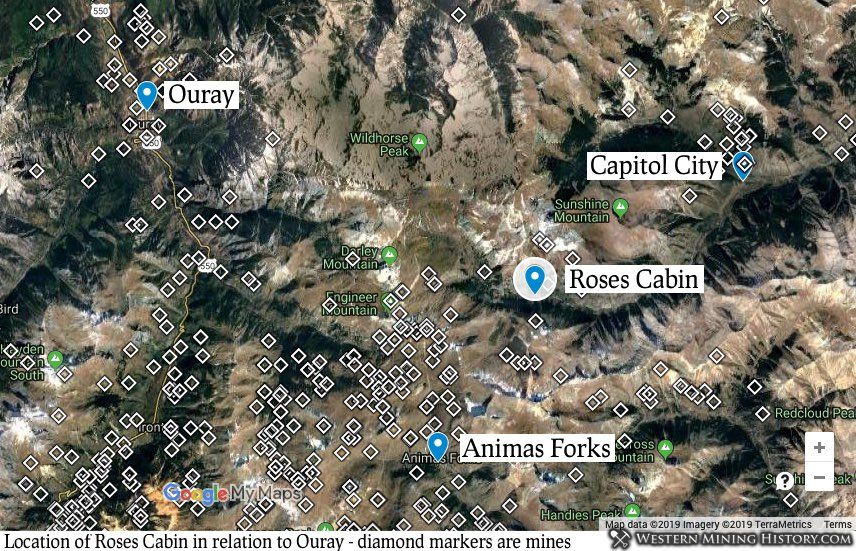 The following text is attributed to the Bureau of Land Management.

Though little remains today, Rose’s Cabin, a lively inn, was once an important wayside which offered food, lodging, and entertainment to miners and travelers for many years.

Rose’s Cabin has had a long and colorful history. In 1873, Ute Indians signed a treaty opening up the San Juan Mountains to mining and settlement. With the treaty signed, the mining rush was on.

One of the earliest pioneers in this area was Corydon Rose, who built a one-story inn in 1874. Rose carefully located his inn; it was about halfway in travel time between the new mining towns of Ouray and Lake City, a convenient stopover site for miners travelling this route. Nestled among the trees, the site was also a safe distance from deadly avalanche chutes.

Rose built his cabin to last. Hand-hewn logs were carefully fitted together, then chinked with mud to keep out the ice, winter winds. Because of his cabin’s sturdy construction, Rose is known as the first permanent resident of the Lake City area. 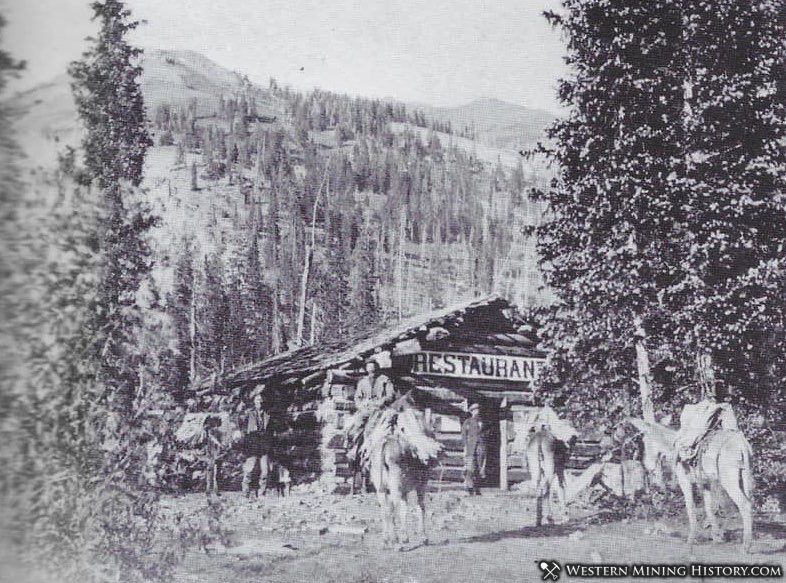 In 1877, Otto Mears constructed a toll road linking Ouray, Animas Forks, and Lake City. The toll road, which passed in front of Rose’s Cabin, increased business here dramatically. No longer used by miners and their mules, today this road caters to 4-wheel drive enthusiasts as it crosses the spectacular Engineer Pass, at an elevation of 12,800 feet.

With the toll road complete, Rose’s Cabin became the principal stop for the daily stagecoach run between Animas Forks and Lake City. The fare for this bouncy trip over Engineer Pas was $2.25. When the dusty stage pulled in, those who wished to spend the night hurried into the cabin to secure their accommodations. Rose himself usually wore a high hat and a long, black coat and often met the weary traveler at the door with a “Howdy, stranger!”

Once, inside, the visitor could unwind from the bone-jarring trop. A bar running the full length of the cabin quenched the thirst of many tired travelers and miners. After drinks, dinner, and perhaps a brisk game of poker, visitors retired upstairs, where partitions formed twenty –two bedrooms. After a filling breakfast the next morning, from a “table that was always supplied with the best in the markets”, those who wished to continue over Engineer Pass to Animas Forks, Silverton, or Ouray, or down Henson Creek to Lake City, could catch the appropriate stagecoach.

The Rose’s Cabin area continued to grow through the 1880s. Several miners, hoping for a quick strike, built cabins nearby and worked mines in the surrounding hills. At its peak, a total of about 50 people settled in the area immediately abound the cabin. By this time, the cabin served as a bar, restaurant, hotel, store, and post office – all under one roof. Rose’s Cabin truly was the hub of civilization in the upper Henson Creek region.

The cabin was also an important transportation link and supply source for local miners. During both summer and winter, miners packed gold and silver ore from mines in the nearby hills to Rose’s Cabin by burro. The ore was transferred to wagons here and shipped down to Lake City for processing. Rose kept 60 pack animals in a stable near his cabin to ship supplies up to the miners, and to carry ore down to the cabin.

Activity at Rose’s Cabin and in much of the San Juans dwindled with the downturn in mining during the late 1800s, led by the silver crash of 1893. By about 1900, the cabin’s role as a place of rest and refreshment had died.

Little remains of Rose’s Cabins today. The large metal object rusting in the meadow was as once owned by postmaster Charles Schafer. Schafer’s name at one time was embossed on the safe in gold letters; today, the safe sits empty. The only standing structure, the old stable, lies to the right. The cabin itself was situated to the left, keeping silent water over this once-lively settlement.