Settled in the 1860’s as a gold placer camp, Butte was stagnant by the 1870’s as the placers ran out. Silver mining brought the district back to life in the late 1870’s, but it was the high copper content of the ores that determined Butte’s future. 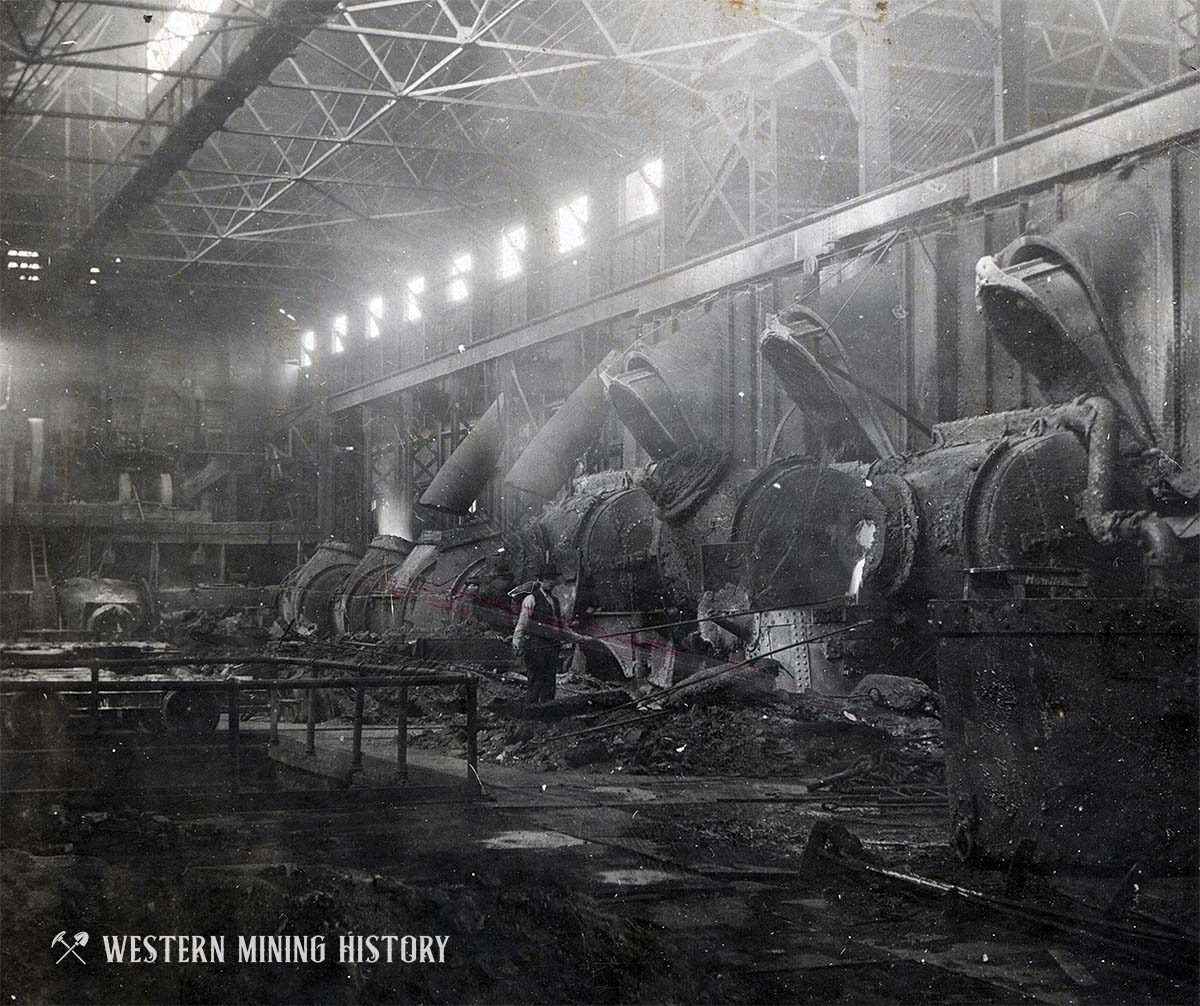 Butte is the largest and most historically significant mining town in North America. A historical marker in Butte gives a good overview of the amazing history of the area:

Richest Hill on Earth
Long known as the "Richest Hill on Earth" Butte produced more mineral wealth than any other mining district in the world up to the middle of the 20th century. To date over 48 billion dollars of wealth has been unearthed from this hill.

This extraordinary phenomenon emerged at the height of the industrial revolution when the mining hill became the most concentrated area of industrial machines on Earth. The colossal machines spawned the most influential labor market anywhere, the most ethnically diverse population in the country, the largest red light district in the American West, nine railroads, the largest network of underground workings per square mile in the world (over 10,000 miles of tunneling), more wealth per citizen than any other comparable place up to that time, and a titanic struggle for the hill's riches by both entrepreneurs and laborers.

But over a century of mining left a legacy of exposed toxic mine waste and polluted water. Thus here at the headwaters of the Columbia River and in the most biologically diverse area of North America, Butte became the site of the nation's largest environmental cleanup. Explore more of the largest historic district in the American West both around town and on this site.

A Description of Butte as it was in 1895

The following is from the 1895 publication “The Great Dynamite Explosions at Butte, Montana: January 15, 1895”. The publication had an introduction to the city of Butte that gave a lot of good insight into how life was in the city during the 1890s.

Just west of the main range of the Rockies, perched on a mountain side, a mile above sea level, is a city, unique not alone for situation, but in a dozen other ways. It is known on the maps as Butte City. In the region round about, it is commonly styled the Greatest Mining Camp on Earth, sometimes called "The Camp' for the sake of brevity. Here are gathered representatives of almost every nation and tongue under heaven. There is probably not a spot on the continent where so cosmopolitan a crowd of humanity jostles and elbows its way along, as that to be found on the main streets of this city between 5 and 6 o'clock in the afternoon, every day in the year. 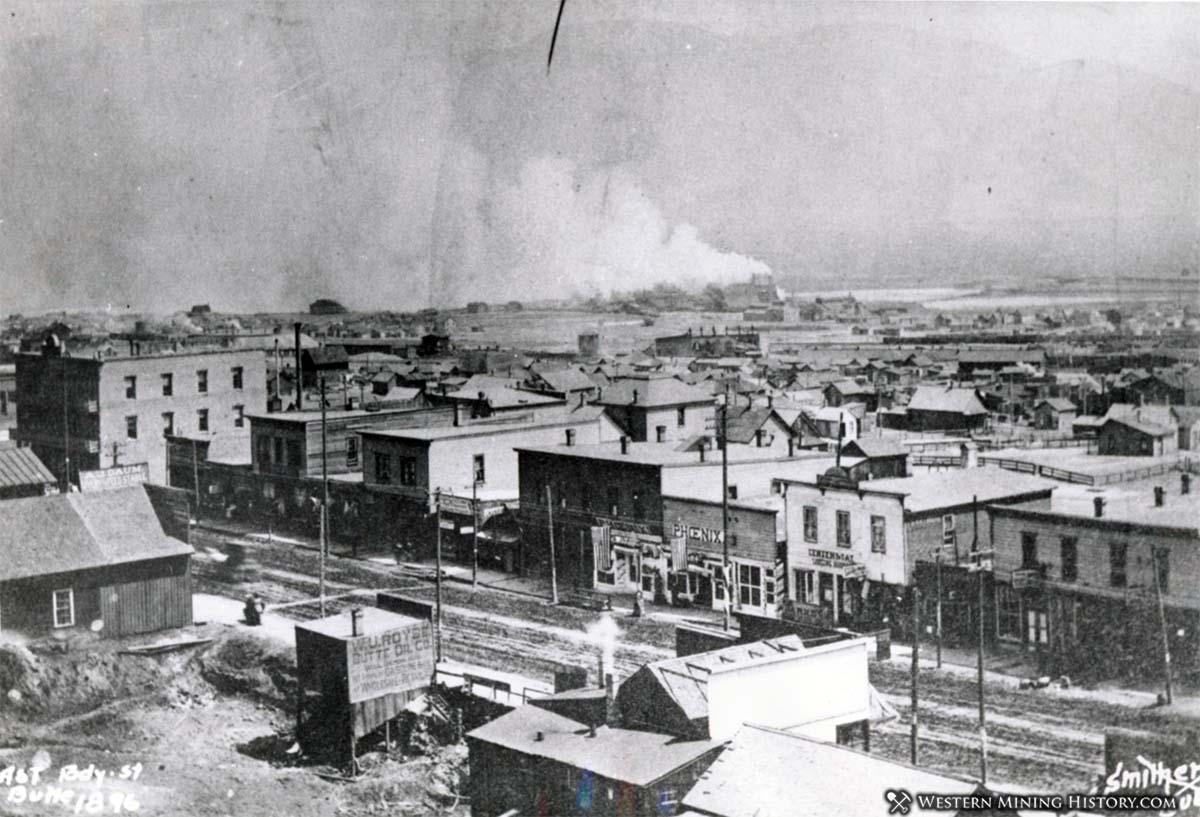 The secret of this is to be found in the great number of men who find employment in the mines of gold and copper and silver, and the exceptionally high scale of wages maintained by the labor organizations, which in this community, are held in a degree of respect that is probably elsewhere unsurpassed.

Although the city has a valuation of $20,000,000, making it the wealthiest city in the world for its population, there is yet imbedded beneath it such quantities of valuable ores as would build another city of equal value, and still some to spare. A lecturer from the East, making a tour of the important cities of the country, recently said: “Butte is the first place I have found where nothing is said about hard times." In the spring of 1892, when the financial crash came, and silver dropped to prices unheard of before, Butte held her own in a most surprising way.

Bank failures in other places were of daily occurrence. Not one of the six or more in this city but kept its doors open, and business went on as usual. Drummers are wont to say, "There is more business in Butte than in any other city I've struck."

A stranger stopping at "The Camp" would at first glance find little that is attractive in its appearance; but investigation would reveal that here can be found most, if not all, of the comforts and conveniences-yes, and the luxuries-of the large Eastern cities, though far removed from all of them. So enterprising are her merchants all they need to know is what the people want and it is soon supplied.

Here are to be found large jewelry establishments containing complete assortments of the latest and most beautiful creations of the silversmith. Dry goods stores, whose show windows and shelves display not only the necessaries and substantials in their line of business, but the most beautiful and costly fabrics from the weaver's loom; dainty laces and ribbons, fans and gloves, and all the bewitching accessories so dear to the feminine heart. Apropos of this, the large number of beautiful and well-dressed women one meets is a constant pleasure and surprise.

There is a decided appreciation here of the beautiful—the artistic side of life; and to minister to this quality are to be found art stores containing pictures, bric-a-brac of all kinds, beautiful china and cut glass. Then, to round out the circle of things that go to make up the adornment of a home, are the carpet and furniture stores, each supplied with the latest and best in their line.

Mrs. Rorer, the world-famous teacher of cookery, who spent some weeks in Butte, pronounces the markets of the best. The grocers are not a whit behind the other merchants in enterprise. The meat and vegetable markets display to buyers all the quality and variety to be found anywhere. The fruit stands are especially attractive. From California come oranges, a great variety of delicious grapes, plums, apricots, peaches and pears. Strawberries of exquisite flavor come from Hood River, Oregon, and cherries as well, large and luscious, and sound all through. One wants no prettier picture than the rows of fruit stands on Park street of a summer morning. Montana itself, though but recently developing the industry, is coming to the front with unexcelled agricultural products.

Gas and electricity, the two rivals of darkness, dispel the latter from streets and houses. Unlike Chicago, no horse cars are to be seen, cable and electric lines supplying the demand for rapid transit. The people are supplied with cold, clear water from mountains fourteen miles away. A large reservoir of modern construction is the storehouse from which the supply is drawn, while it, in turn, is largely supplied from snow in the canyons said to be three hundred feet deep.

Butte's citizens are abreast of the times in much that goes to make up the higher side of life. Here we find in great numbers graduates of the best colleges of America and Europe. There are numerous literary societies whose members are awake to the subjects that interest the world at large, and who have access to the best thought of all the ages, through the largest Public Library within a radius of nearly a thousand miles, which is at once the pride of its people and the admiration of visitors, and which issues 100,000 books a year. In line with this, the book and stationery stores do a thriving business. There are excellent public schools, whose equipment, including that of the High School, ranks better than that of many older cities and whose registration of pupils is rarely equalled in cities of the size of Butte.

The city also supports three daily and several weekly papers of a high standard of literary and mechanical workmanship. Promptly supplied with full telegraphic reports of events occurring in all parts of the world, yet true to local interests. The contents of all, while carefully accurate, are marked by bold originality and superior method of presentation. The Butte Miner and Anaconda Standard, which appear every morning, the Inter Mountain six evenings in the week, and the Butte Bystander, the Populist Tribune, the Montana Mining & Market Reporter, and the Railway Review, issued weekly, satisfactorily supply the wants of as intelligent and exacting a public as can be found in the country.

There are churches of all denominations and the Salvation Army ministers to a class that the churches do not reach. Butte's people are devoted to music, and many fine musicians are to be found among them. There are several good bands, one of which is composed entirely of men employed in one of the mines. The best composers are given a prominent place in their selections, and the music is exceptionally well rendered.

Athletic sports receive a goodly share of attention through the Pastime Club and similar organizations, not forgetting a Physical Culture Club composed of ladies. The ubiquitous bicycle has many devotees. A large skating rink, lighted by electricity, furnishes another avenue for those who like out-door exercise. A pretty opera house is an additional feature. Guests in the city find unexcelled accommodations at the hotels, where the dining room service is especially good. Time was when such accommodations were not to be found, but that day is past.

It is very evident that all these things have been made possible by the vast quantities of gold, copper and silver ore taken from the mines in the last twenty years, representing an annual product valued at from twenty-five to forty million dollars.