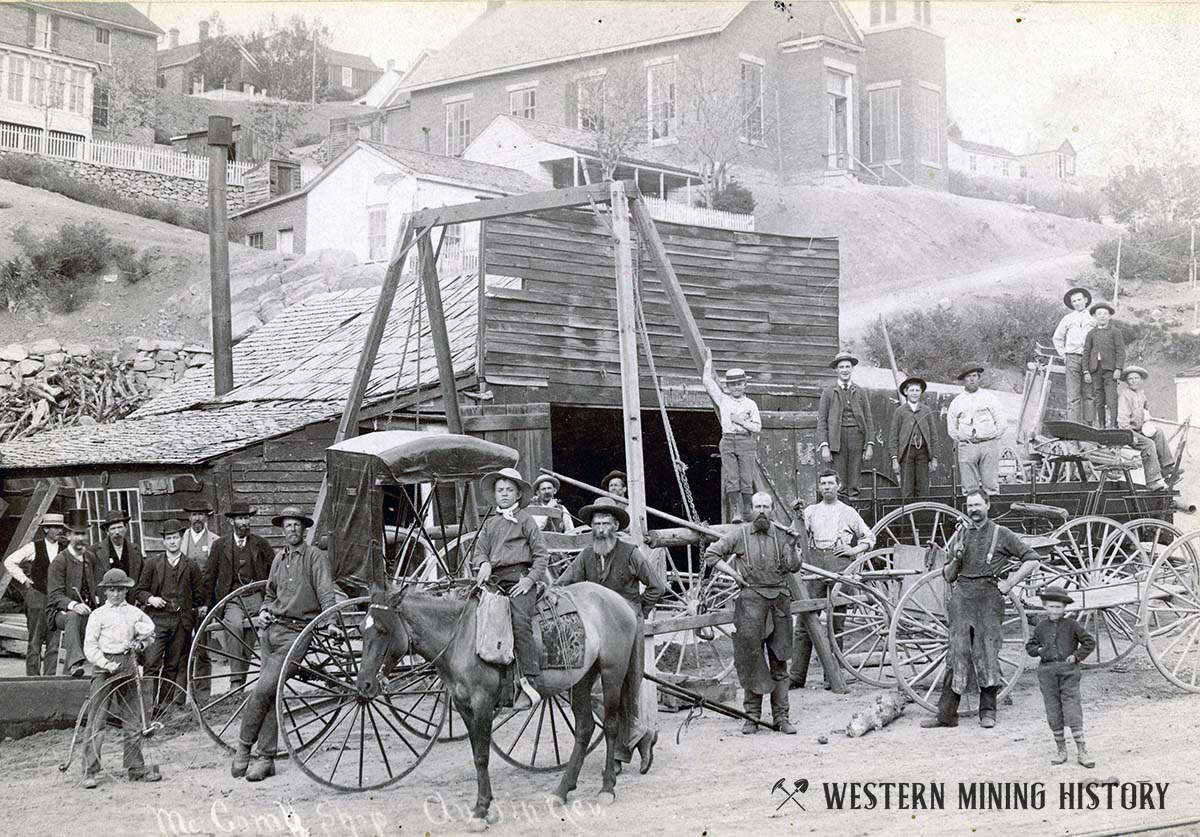 Crowd gathered in front of the McComb shop - Austin, Nevada

Prior to 1862, central Nevada was a vast and largely unexplored area. Other than Native Americans, Pony Express riders and overland mail personnel were the only people that inhabited the area.

The first big strike occurred in May 1862 by William Talcott, a former Pony Express rider and resident of the Reese River Pony Express station (also known as Jacob's Spring). Talcott was said to have been cutting wood at Pony Canyon when he discovered a promising looking quartz vein. Samples were sent to Virginia City for assay which came back with confirmation that the vein was rich in silver. 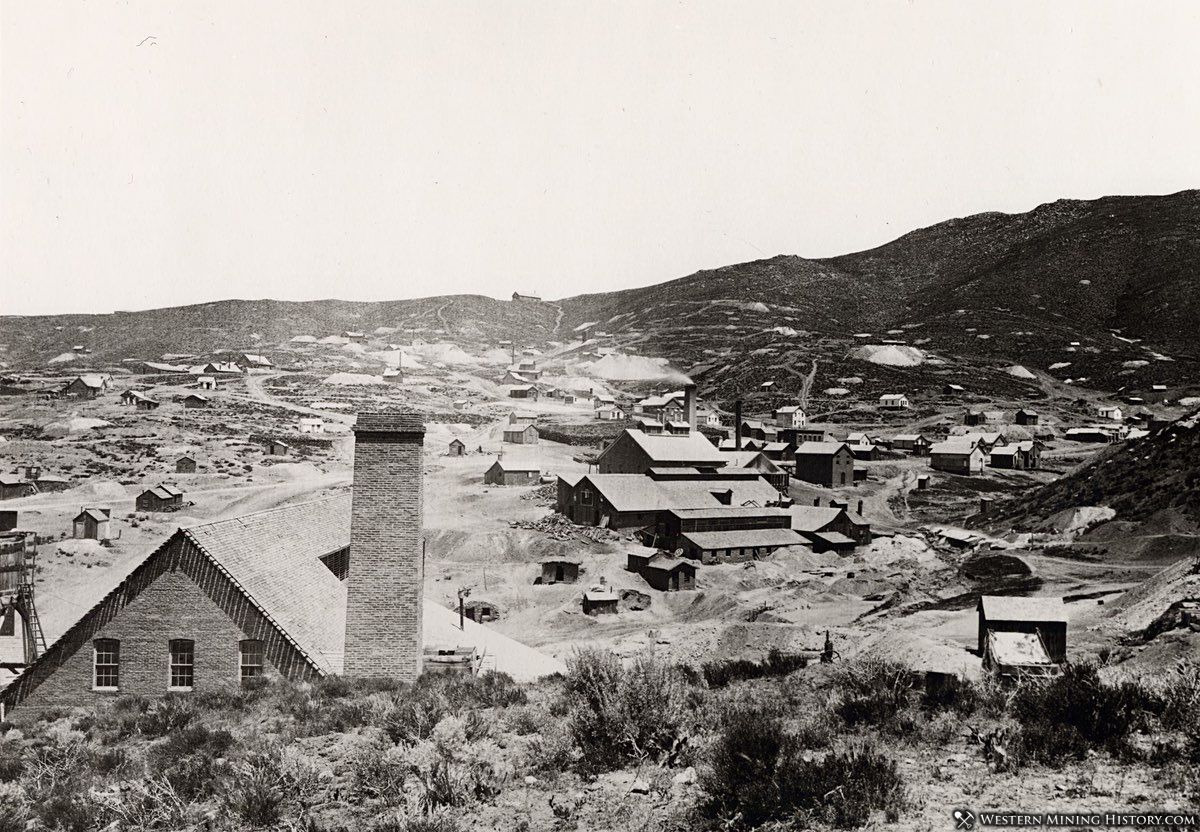 News of the discovery spread rapidly, and the Reese River mining district was organized in July. Hundreds of miners arrived at the district in 1862, but it wasn't until January of 1863 that the great Reese River silver rush attracted thousands of miners and prospectors.

Initally two camps were established - Austin on the slopes of Pony Canyon, and Clifton on the flat at the mouth of the canyon. Ultimately Austin would become the district's boom town and by late 1863 Clifton was mostly abandoned. 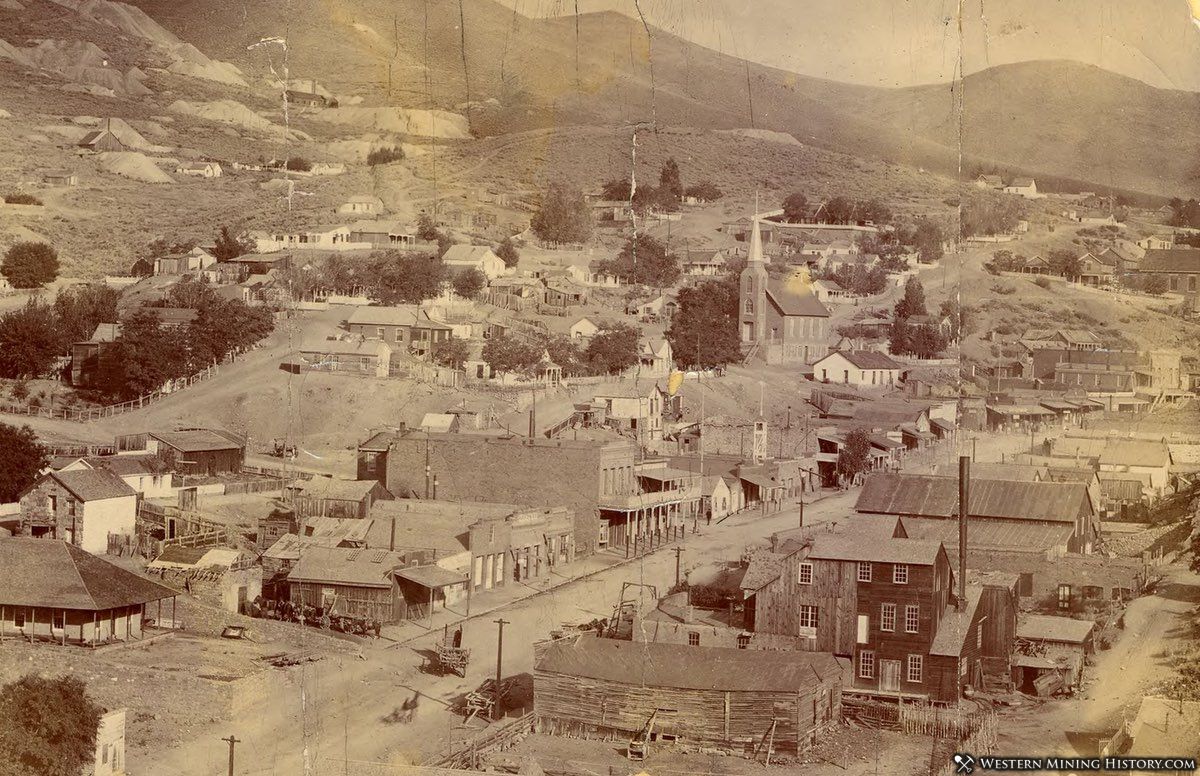 Although Austin was in a remote part of Nevada, it's location on the established Pony Express route made it one of the easier boom towns to reach at the time, which accelerated the pace at which the district was developed. An April newspaper article described the cost and distance of stage fare to the Reese River district:

Another article states "Roads from Placerville (California) to this place unprecedently good." 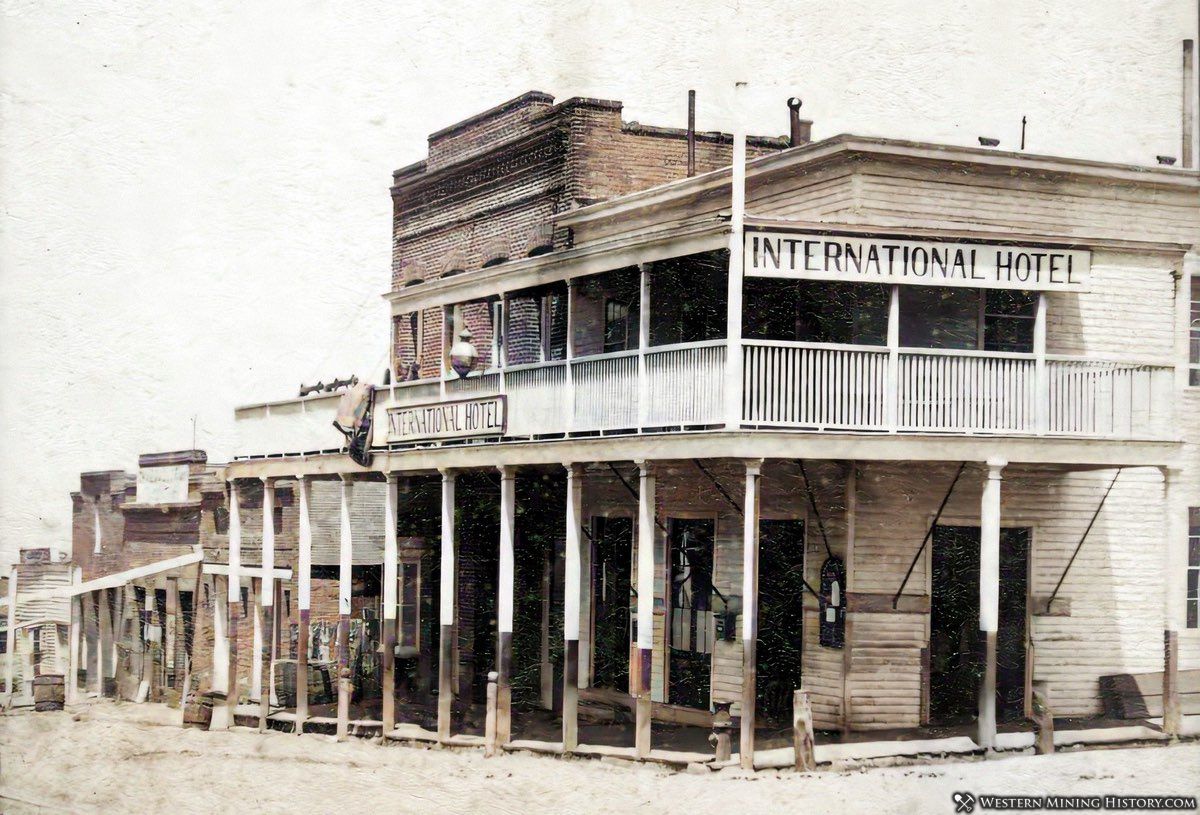 International Hotel - Austin, Nevada ca. 1880s. This hotel was dismantled in Virginia City and transported to Austin in 1863. The hotel burned down in 1958. (enhanced image)

By summer of 1863, thousands of claims were staked in Pony Canyon and Austin became a tent city with over 2,000 residents. Businesses were rapidly built to serve the flood of miner's entering the district. By late 1863, Austin had bakeries, barber shops, breweries, a hotel, and a weekly newspaper the Reveille. Four stamp mills were completed before the end of the year. 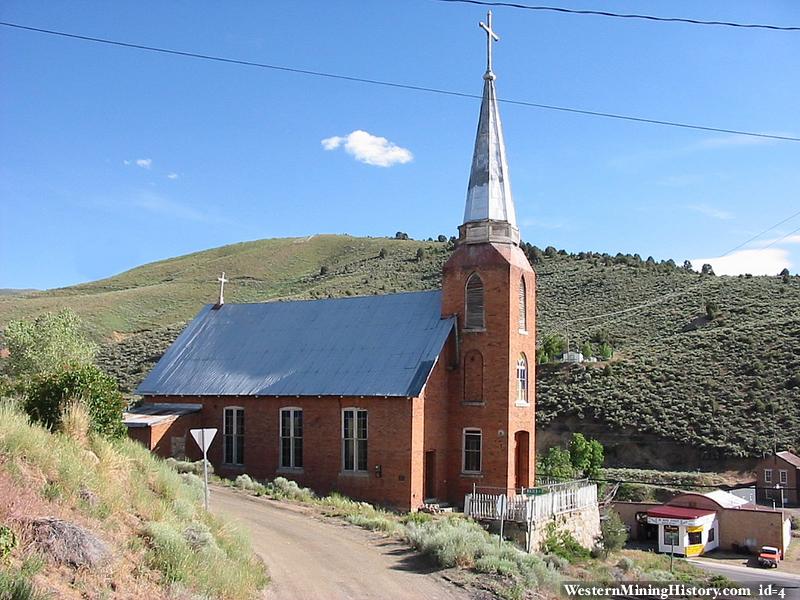 Austin became a staging point prospectors interested in discovering new mines in central Nevada. Numerous discoveries were made and new camps established. The booming town was the center of a growing mining empire and by late 1863 had over 7,000 residents. In September 1863 Austin became the county seat.

Austin was incorporated as a city in January 1864. Later that year a police force and fire department were established. As the city continued to develop, many brick buildings were built, schools opened, gas works provided lighting for city streets, and the Reveille became a daily paper. 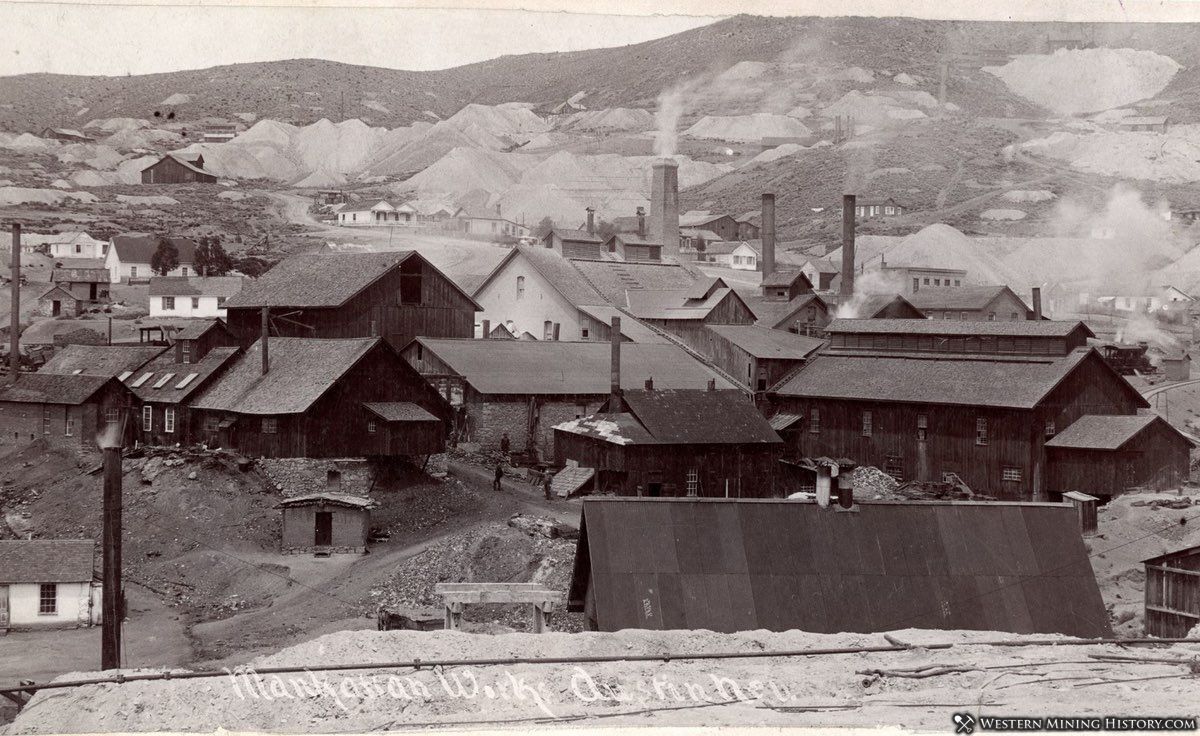 The White Pine excitement of 1869 resulted in many miners and prospectors leaving Austin for that new district, and the city experienced a brief slump. However, by 1871 the Reese River district settled into a period of stable production that provided Austin with prosperity for more than decade. In 1880 the Nevada Central Railroad built a line from Battle Mountain, on the transcontinental railroad, to Austin.

The early 1880s saw a decline in production from Austin mines and by 1887 most major mines were closed. Almost $20 million in silver production is credited to the district up until this point. Subsequent efforts to reopen mines and operations by smaller operators, mining both gold and silver, have increased total production of the district to around $28 million (based on late-1960s metal prices). 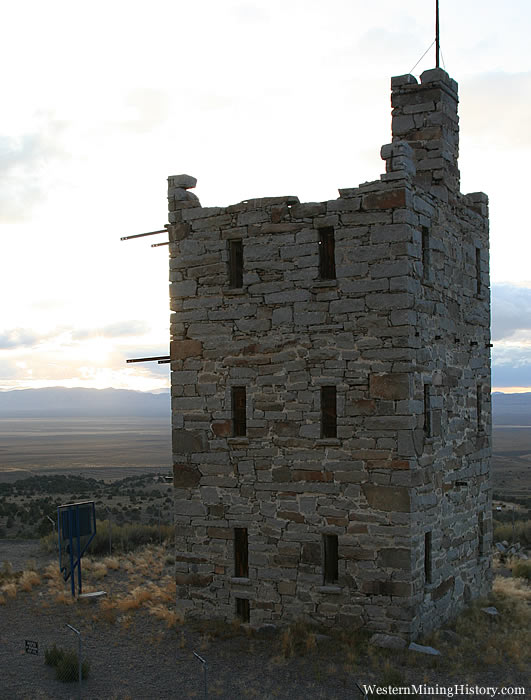 Today Austin is a "living ghost town", a well-preserved example of an early Nevada mining town. Stokes Castle, a strange three-story stone tower, is located just outside of town. It was built in 1897 by Anson Phelps Stokes, a wealthy eastern capitalist who had a financial interest in several of the local mines. It was only occupied for a month, and then fell into disrepair.