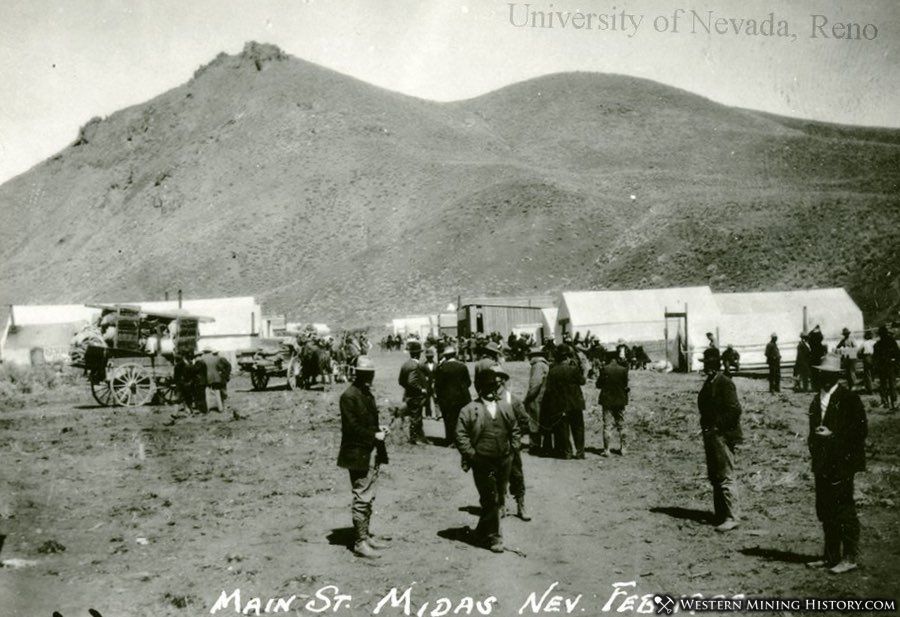 Midas was settled in 1907 after gold was discovered at Owyhee Bluffs. The original name of the town was Gold Circle, but was changed a couple years later to Midas.

Midas has enjoyed a long history as a mining and ranching town, but only a few residents remain today. The organization Friends of Midas has been active in preserving the history of the town.

The 1910 publication Mining Camps of Elko, Lander, and Eureka Counties Nevada summarizes some of the early history of the camp:

The Gold Circle district is situated in the hilly country along the southeastern slope of the Owyhee Bluffs, near the edge of Squaw Valley. It is about 45 miles north of Battle Mountain and approximately the same distance from Golconda, and is connected with both of these stations by stages which make round trips three times a week.

In the summer of 1907 gold was discovered on several claims, and in March, 1908, as a result of a number of rich strikes, the district experienced one of the rushes which is characteristic of the method of settlement of mining camps in Nevada.

A town site was laid out at Midas, and within a few weeks some 1,500 persons were established in this town. After the first excitement had passed away a majority of the newcomers left, and in September, 1908, the population of the camp had decreased to about 250 persons.

Several of the claims were under development, and a number of lodes were being prospected with more or less success. A few tons of rich ore have been shipped to smelters, but the bulk of the ore that has been developed is not of a grade to pay the shipment charges, which are necessarily high, as they include a long wagon haul.

he deepest shaft is sunk 200 feet; several other shafts are down 100 feet; and three or four tunnels have been driven to depths approximately 100 feet below the surface. Ground was broken in September, 1908, for a 10-stamp custom mill, which it was planned to erect at once, and two mining companies were contemplating the erection of mills in the near future.