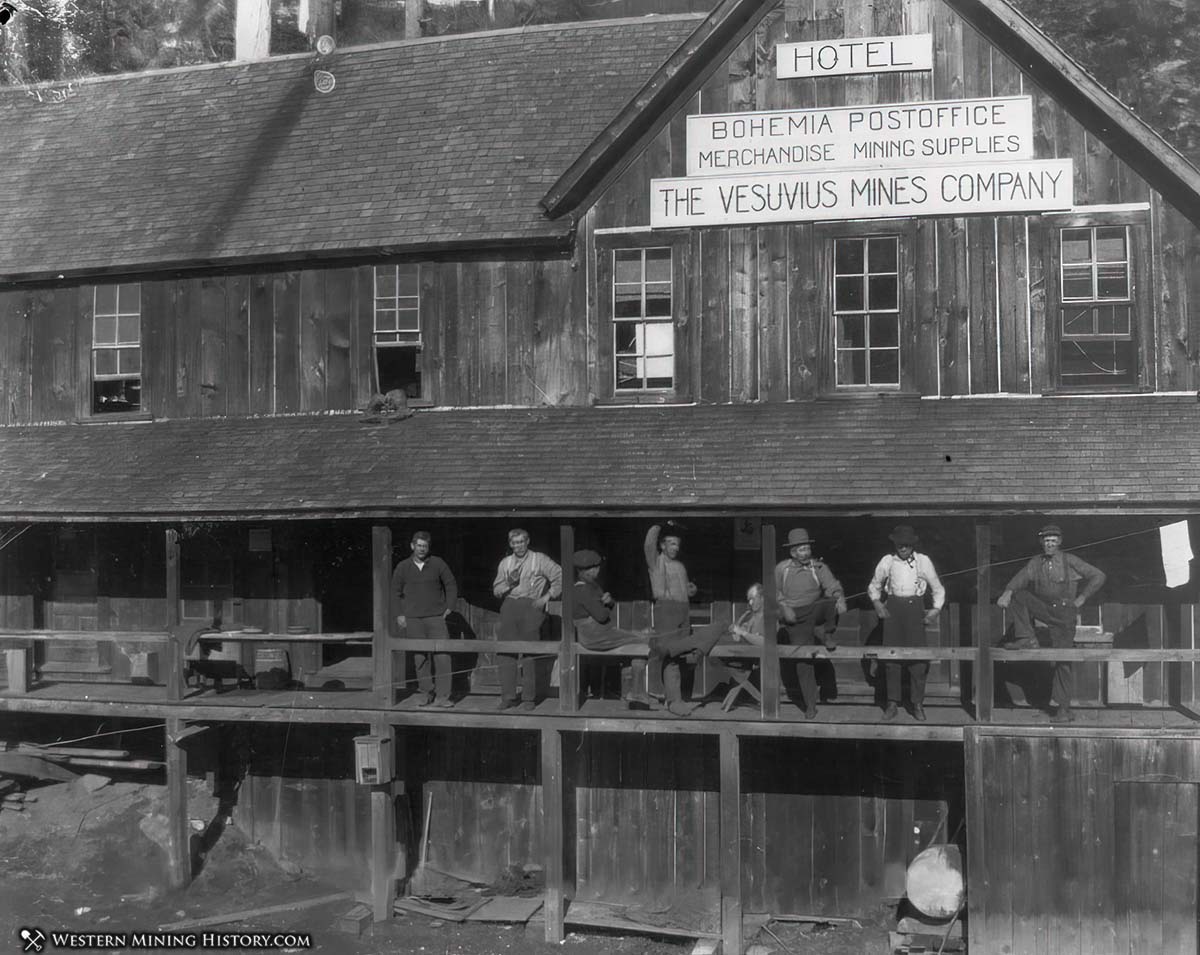 The Bohemia mining district is located about 25 miles southeast of Cottage Grove, Oregon. The district is approximately nine miles square, in a very rugged mountainous and heavily forested area. 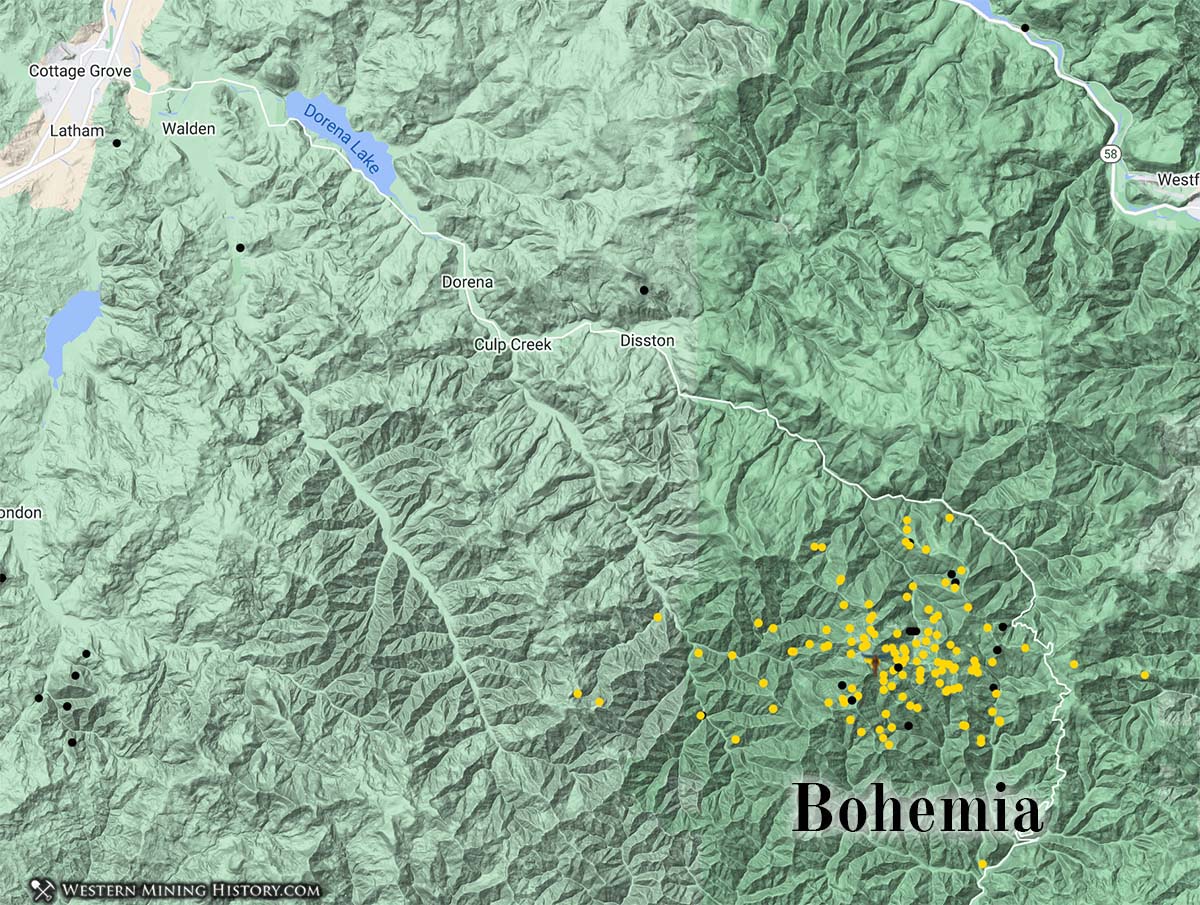 The history of the district, and Bohemia City, is quite complicated and details are difficult to nail down. The original camp, sometimes referred to as the "Old City" was established on the east slope of Bohemia Mountain in the 1860s. The original town was abandoned in the 1870s, but Bohemia City rose again in the 1890s as a company town at the Musick mine. The Bohemia post office operated from 1893 to 1922.

The district also had a post office at Mineral Camp between 1903 and 1908. This location was described as "the last stop for miners and freighters before they began the long, hard trip to Bohemia Saddle". In addition to the post office, the camp contained a two-story hotel, a post office, a general merchandise store, and an assay office.

Wagon full of people near the Vesuvius mine

Gold was first discovered in this area in 1858. A small group of prospectors worked the area until 1860 when the district went idle during the initial years of the Civil War. In the spring of 1863, gold was again discovered, this time by James Henry Sharp, who was also known as "Bohemia Sharp". This discovery got more attention than the earlier strikes, and many prospectors entered the area in 1864 and 1865. 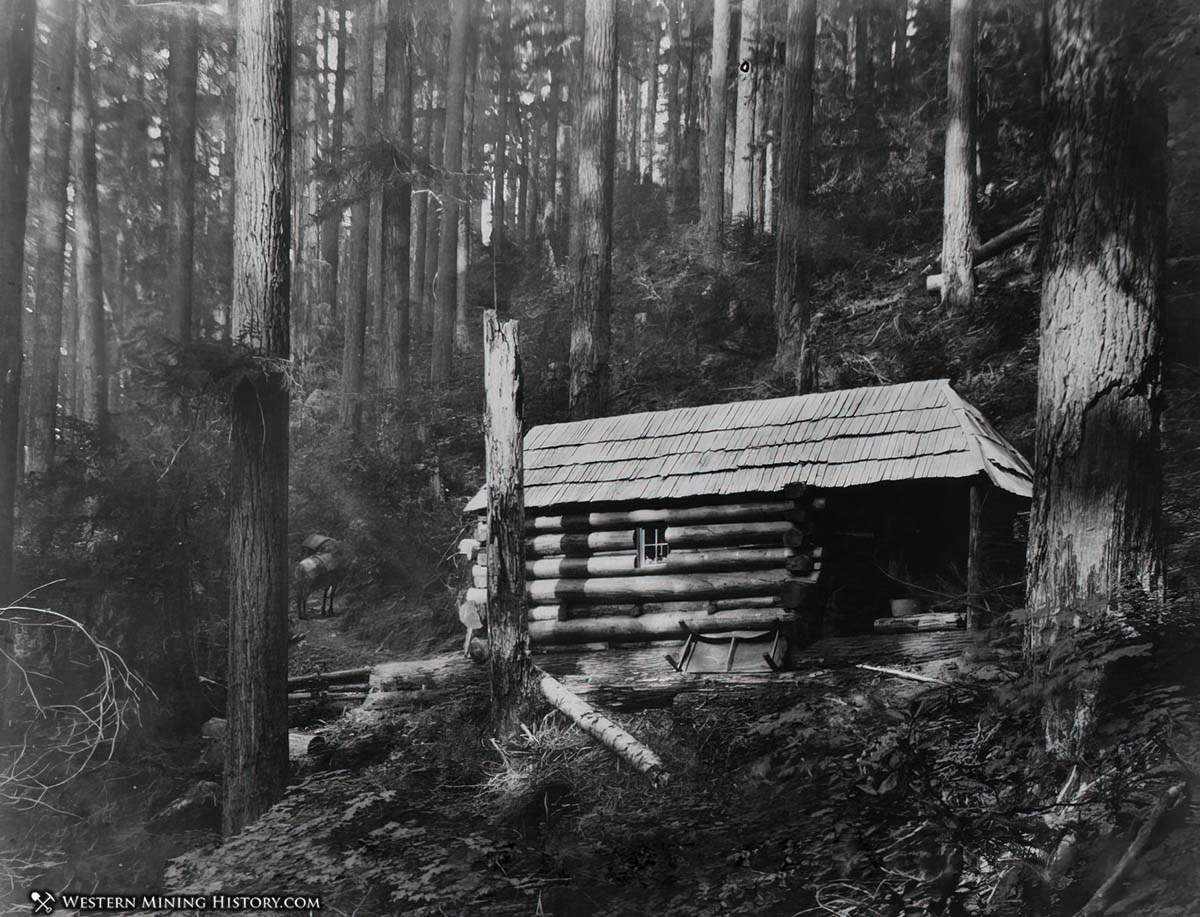 In 1866 a miners' meeting was held and the camp known as Bohemia City was established. In 1868 the population of the camp exceeded 100 men. Details on this early incarnation of Bohemia City are difficult to come by, but it was said to have cabins, a hotel, and a saloon. There is no record of a post office. That year the first arrastra in the district was built.

Development of the district was slowed by the steep and heavily forested terrain. The first road into the area was built in 1870. Although sources report different dates, around 1875 the first stamp mill, Knott's mill, was built. The five-stamp mill was purchased from the Joshua Hendy Iron Works in San Francisco. The mill, boiler, and steam engine were transported by ship to Portland, then up the Willamette by river boat to Eugene, and finally transported to the Bohemia district over very difficult terrain.

In 1877 the Knott mill building collapsed under the weight of snow, but the mill was repaired and moved a short distance to the Annie mine in 1891. The story of how the Knott mill was brought back into service is very interesting, and is included lower on this page.

By the late 1870s interest in the Bohemia mines waned, and Bohemia City was abandoned. 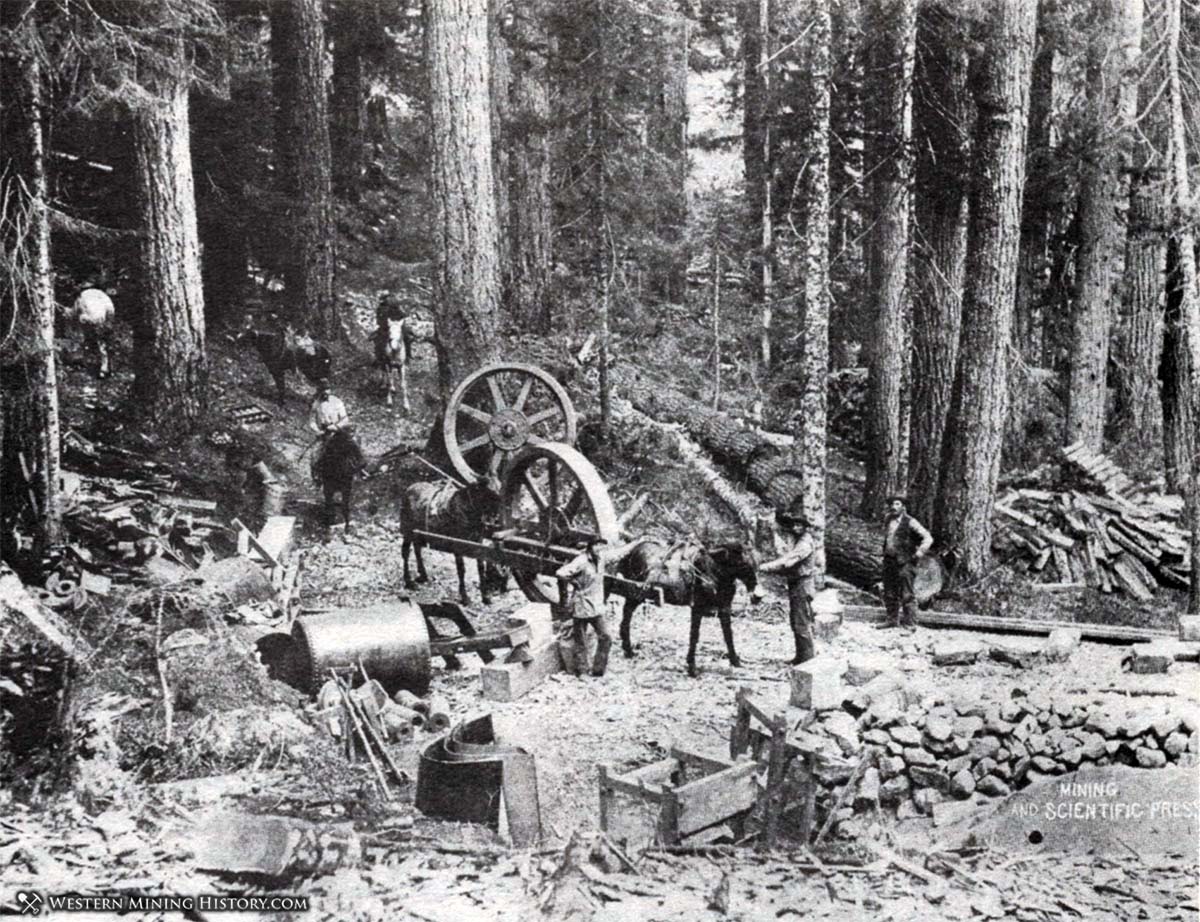 Bohemia Comes Back To Life

The district was mostly idle during the late 1870s and early 1880s, but exploration and development was starting to pick up as the decade wore on, and by 1889 the Bohemia mines were gaining new attention. A July 1889 newspaper article reported the following:

The Knott mine is located on Grouse Mt. and has two deep shafts. Six miles southwest of the Knott, is the Pearson group of mining claims, with free milling ore assaying $260 to the ton. The ledge is over a mile long. Two miles west of Pearson's mine is the Brokerhoff silver mine, and one-half mile from Pearson's is the Sharp's Silver Star.

James A. Musick arrived at the location of the "Old City" of Bohemia on the east slope of Bohemia Mountain in 1891. According to stories of his fateful discovery, "tired and thirsty and threw himself down to drink from a sparkling stream which sprang from Bohemia's flank. And there shining up at him from the rocky stream bed was gold - free, glittering, "Specimen" gold - in place in the huge quartz ledge lying undiscovered within a stone's throw of "Old Bohemia City." 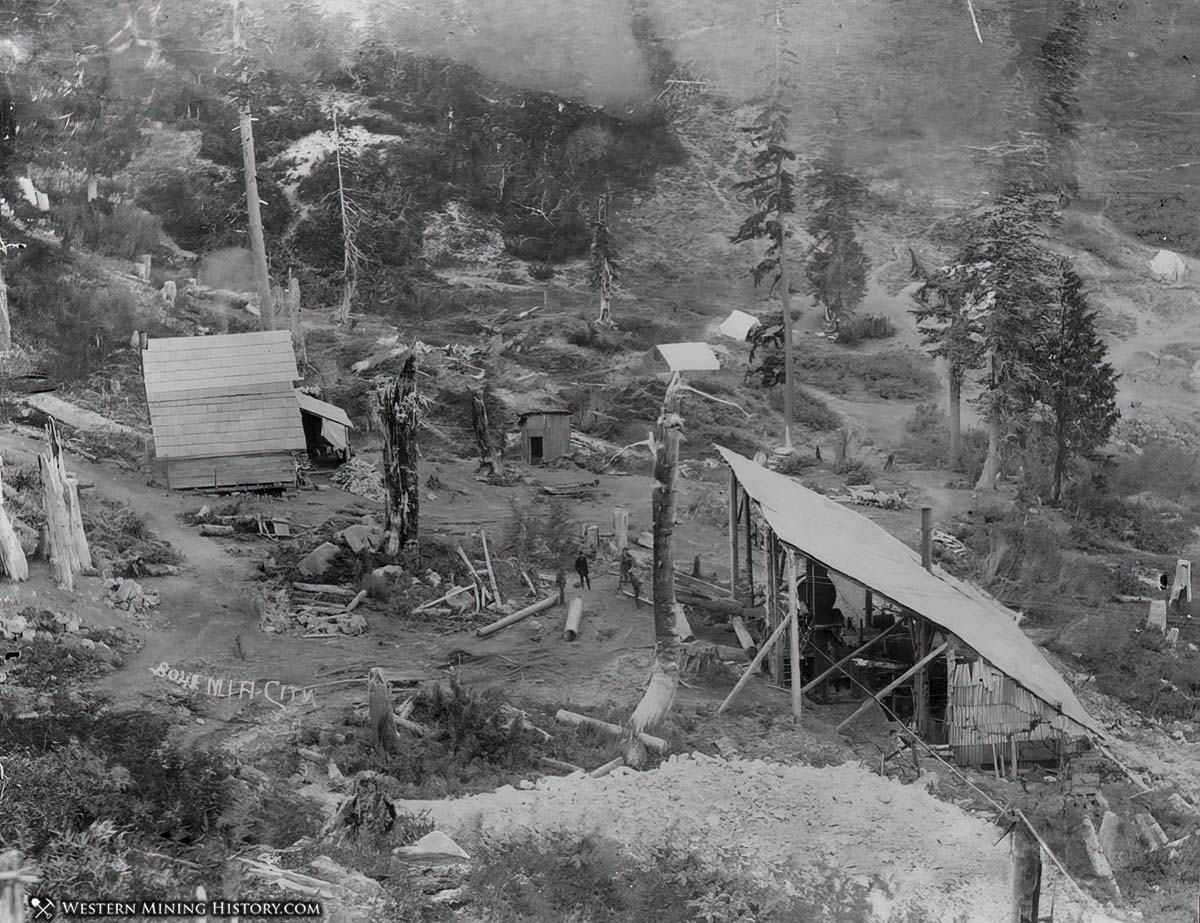 The Musick mine would become one of the district's largest producer during the peak years after 1900, but the difficult terrain in what was still heavily forested mountains slowed development considerably. Although the first stamp mill at the Musick, which was transported entirely by trail, was operating by late 1892, it was not until 1898 that a road finally connected the mine with the outside world.

With a road finally in place, development at the Musick mine intensified, and a new ten-stamp mill, a sawmill, and several bunkhouses were completed by late 1898. However, deep snows that year, reportedly up to 26 feet in depth, idled the mine until the following spring. 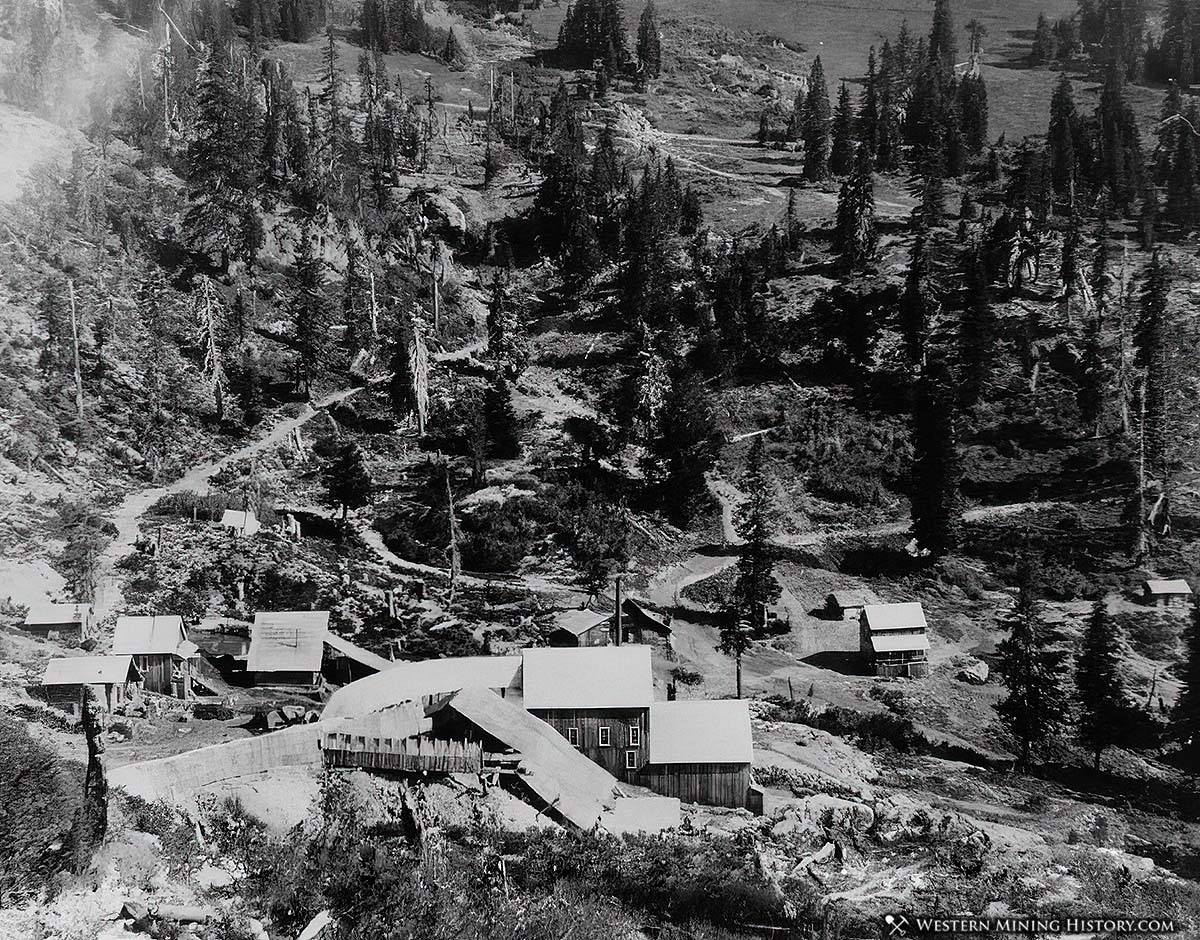 Many important lode discoveries were made in the 1890s. The principal mines of the districts were the Musick, Champion, Vesuvius, Noonday, Helena, and California, although many smaller mines have operated here over the years. It was reported that prior to 1902, over 2,000 mining claims had been filed in the district.

The post-1890 version of the Bohemia mining camp was located at the Musick Mine, and contained a post office, store, barn, blacksmith shop, and various mine buildings. This was essentially a company town, owned by the Oregon Securities Company.

The photo at the top of this page shows the Bohemia post office, hotel, and store under the banner of the Vesuvius Mines Company. Whether this was a later separate location from the Musick Mine is difficult to determine, and underscores the difficulty of tracking down exactly where "Bohemia City" was actually located throughout the decades. 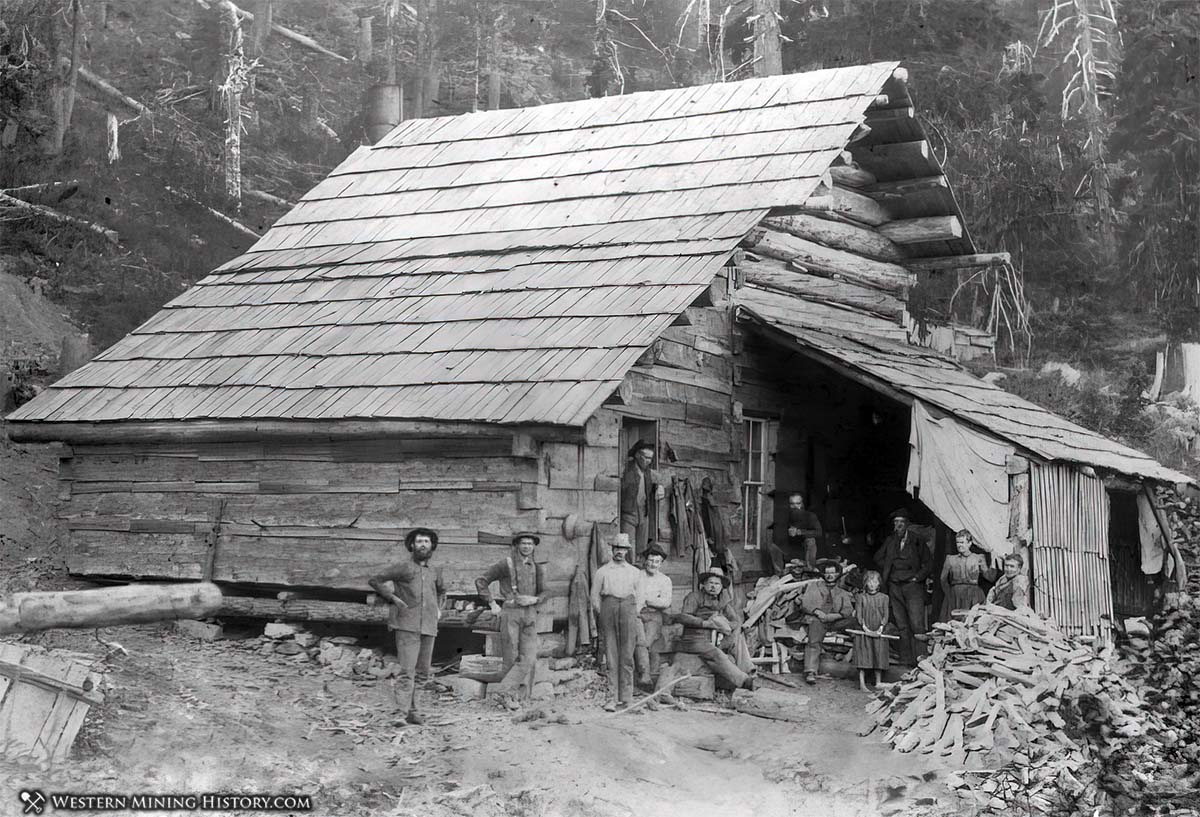 Boarding house at the Davis Mine

Although the district's heyday was over by the 1920s, some of the larger mines produced at intervals both before and after World War 2.

The Knott Mill Resumes Operations at the Annie Mine

The Annie mine was located in 1890, and in 1891 the old Knott mill was purchased and moved down the hill to the Annie mine works. The mill operated seasonally in 1891 and 1892 and the returns were good enough that the company was eager to run the mill more consistently going forward. When the owners returned to the mine in early 1893, they found the mill entirely buried in snow.

The following account of how the men got the mill operating and overcame other challenges of that period is worth recounting here. Note that this text comes from a packet of reports distributed by the Oregon Department of Geology and Mineral Resources, but the source of the text is not stated.

Work was started early in 1893-so early that when "Andy" Nelson (father of the writer), and Jack Klopfenstein arrived on foot after the long hike from Kerr's ranch, they found the mill entirely buried in snowdrifts.

Locating the boiler room by means of the smokestack, which protruded some three feet out of the snow, they dug down, found the door and proceeded to overhaul the machinery by lantern light. The rest of the crew arriving, they were put to work by Supt. McGee on the job of cutting off the tops of trees, hauling them across the snowbanks and throwing them down the hole for use as wood for the fire under the steam boiler. 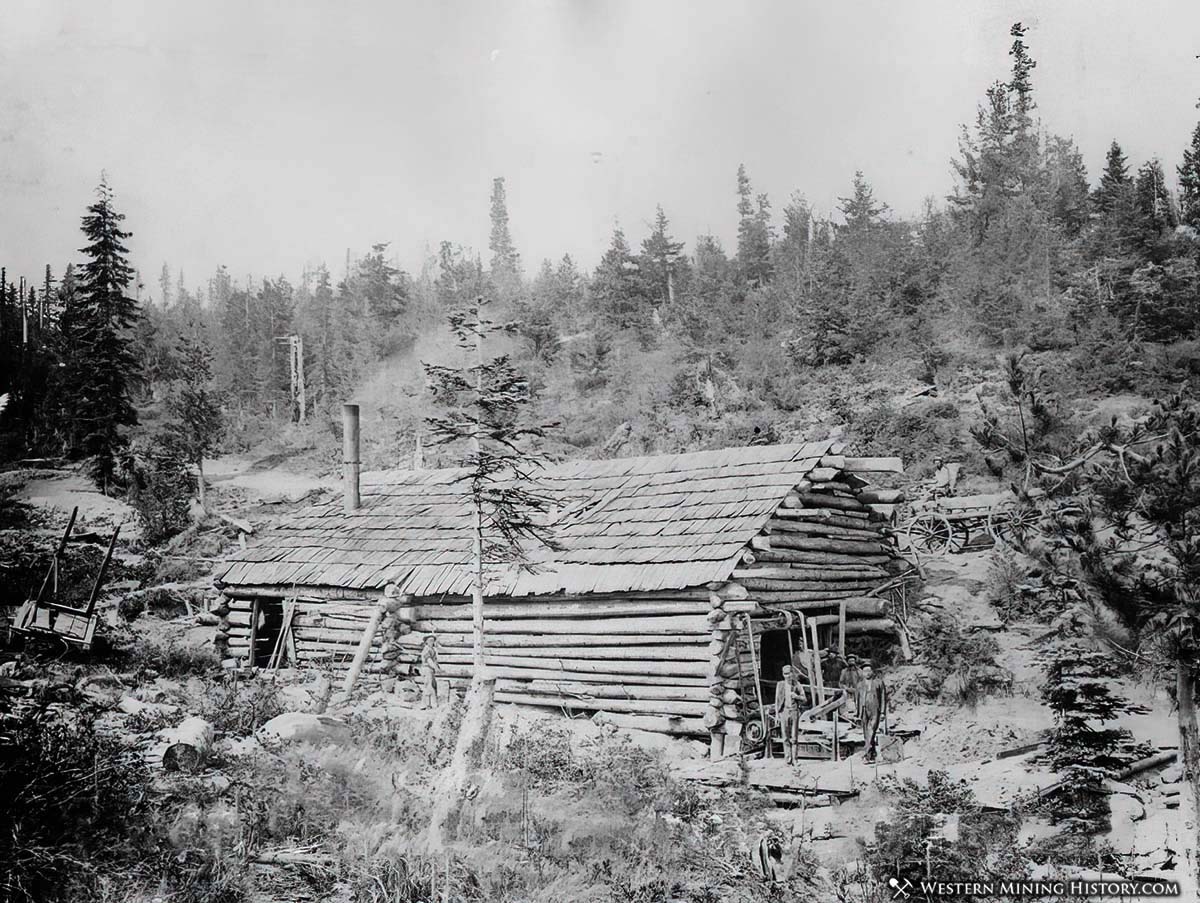 Under such difficulties the successful run began, with Klopfenstein as mill man and Andy Nelson as engineer. It is interesting to note, as showing the influence of Bohemia mines on early Cottage Grove history, that Nelson used his engineer's salary to pay for a visit to the Chicago World's Fair of 1893, where he saw one of the first electric light plants in operation. He came home and promptly established Cottage Grove's first electric plant and its first incandescent system of lights.

The Annie Consolidated Co. built a 500-foot tramway to move ore, laid hundreds of feet of pipe to get more water, and started to make the trail into a road. The year 1893 being a year of depression or "panic," the road crews were, according to reports, not paid in money. They were given their meals, lodging was provided in tents along the route, and morale was kept up by the bonus of a keg of whiskey each Saturday night.

Tom Parker, who lived for many years at Lundpark, related how - no machinery being available, not even a peavy, and no horses being used - the entire road was strictly hand-built; logs being moved simply by 40 or 50 men taking hold and rolling them off the right-of-way. The road was steep, the switchbacks sharp, Teamsters handling the 10-horse teams later, had trouble pulling the Noonday machinery around the turns. 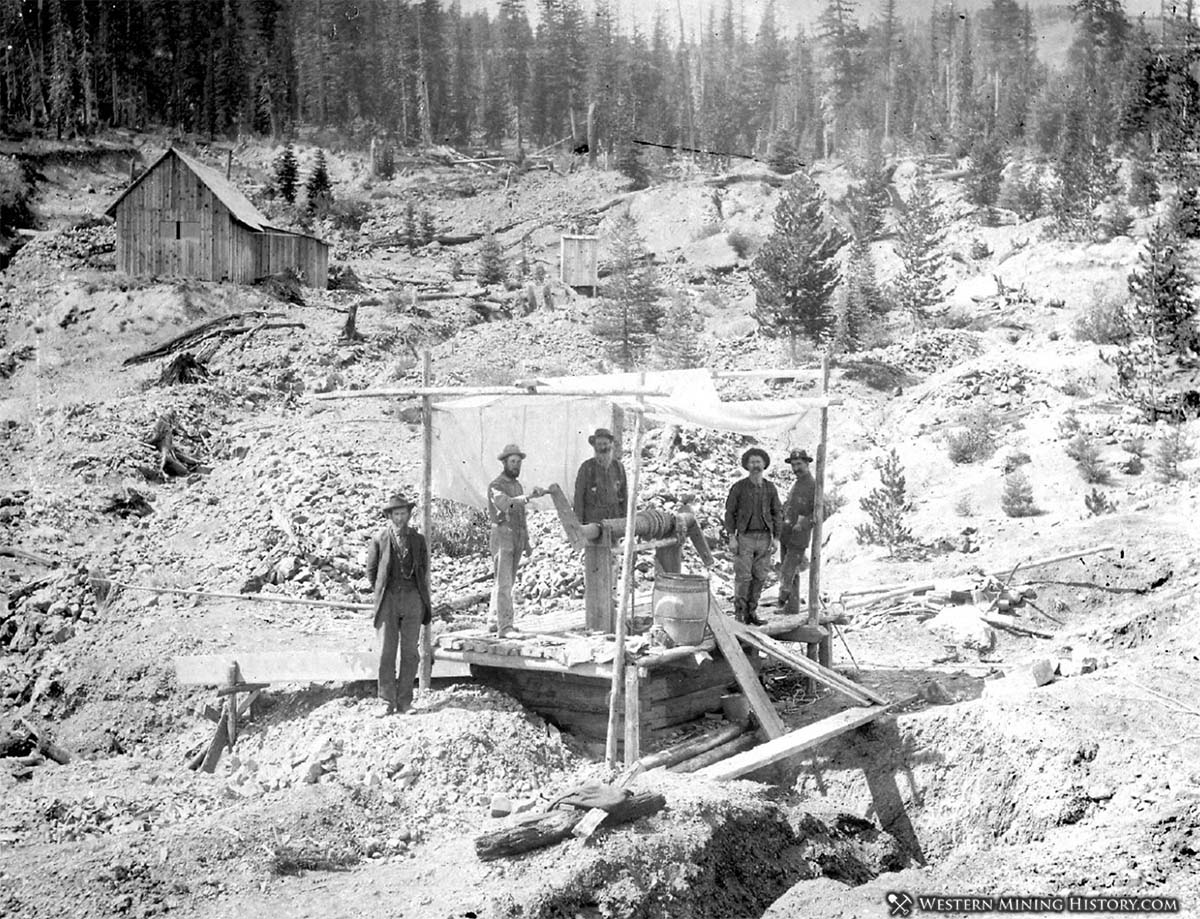