California can be divided into 11 well-recognized natural divisions or geomorphic provinces. Each of these provinces has distinctive physiographic and geological features, and in each the distribution of economic mineral disposits, including gold, follows certain definite patterns associated with the major geological structures and rock types. The provinces are: 1) Klamath Mountains, 2) Cascade Range, 3) Modoc Plateau, 4) Coast Ranges, 5) Great Valley, 6) Sierra Nevada, 7) Basin Ranges, 8) Mojave Desert, 9) Transverse Ranges, 10) Peninsular Ranges, and 11) Colorado Desert. Figure 2 shows these provinces and the distribution of the gold-bearing areas. Tables 6 to 9 list the principal gold mining districts, lode mines, hydraulic mines, and drift mines. The figure and tables appear on p. 12-14.

Most of California's gold production has come from four of the 11 geomorphic provinces. These provinces are the Sierra Nevada, which has been by far the most productive, the Klamath Mountains, Basin Ranges, and Mojave Desert. Lesser amounts have been mined in the Transverse and Peninsular Ranges of Southern California, the Modoc Plateau and the Coast Ranges. Gold has been recovered along the eastern margin of the Great Valley, where it was derived from the Sierra Nevada. Starting on p. 15, this book is divided into seven chapters dealing with the gold-bearing provinces: 1) Sierra Nevada, 2) Klamath Mountains, 3) Basin Ranges, 4) Mojave Desert,S) Transverse and Peninsular Ranges, 6) Modoc Plateau, and 7) Coast Ranges. Each chapter has a general introduction, and the district descriptions follow in alphabetical order. 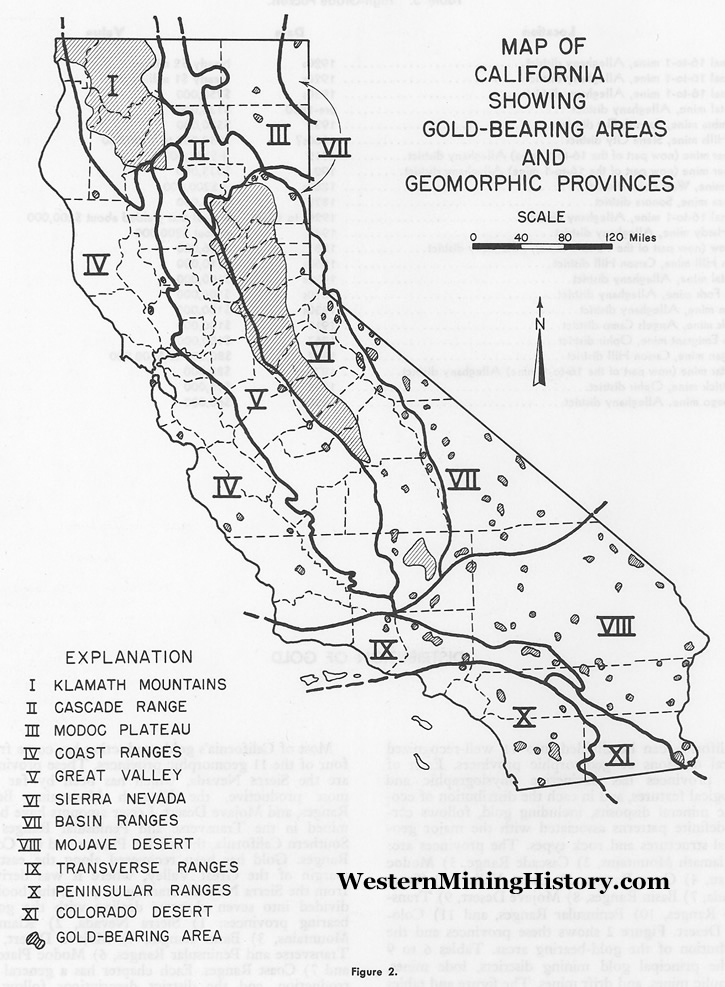