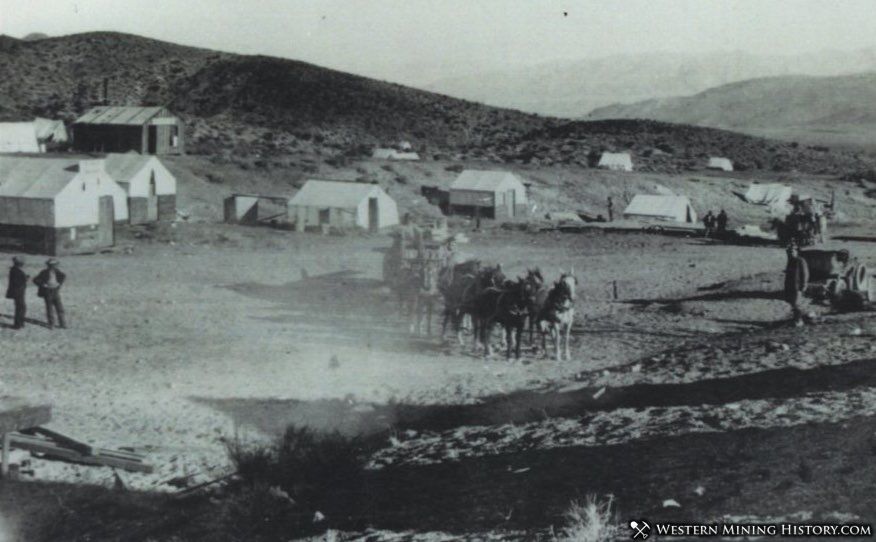 The mining camp of Greenwater was settled in 1906 near Greenwater Spring in California's Death Valley region, after discoveries of copper ore. Greenwater was the name taken by the town that resulted from the merger of two earlier camps - Ramsey and Kunze.

The presence of copper ores in the area were known as early as the 1880s, but the regions extremely remote location and harsh climate made the development of copper mines too costly at the time.

The relative remoteness of the area changed in the first decade of the 1900s as the mining boom at Rhyolite, Nevada brought civilization closer to the Death Valley region than it had ever been before. One of the railroads built to service Rhyolite came within 20 miles of the Greenwater site, making the previously remote area relatively easy to access.

Prospectors had located additional Greenwater copper deposits around 1904 (or rediscovered deposits that had been discovered in previous decades but never exploited). The combination of new discoveries and relative ease of access to the area set off a new mining boom starting in 1906.

In September of 1906 the Los Angeles Herald reported on the rush to Greenwater:

VALUES HIGH AT GREENWATER
Excitement over the copper deposits recently discovered In the Greenwater, Cal., district is on the increase. Hundreds of men have braved the dangers of the desert to get into Inyo county and locate prospects in the new field sixty miles south of Bullfrog.

It is stated that within the past two weeks there has been realized cash aggregating a grand total of $4,125,000. The mere price of everything In the district has shot sky high. In twenty days prices of property in the district have gone from $100 or $200 to $10,000, and In some cases even higher.

Such men as Schwab, Heinze, Senator Clark, H. H. Clark, Malcom Macdonald, Donald Gillts and Senator Nixon have representatives In the district. Right and left there is spending money for every purchasable property and development work is being rushed as fast as men and supplies can be hustled into the district.

The situation at Greenwater was developing at a time when demand for copper was sharply increasing as a result of rapid electrification across the country. Copper wiring was in high demand and existing copper districts like Butte, Montana were unable to meet the growing need.

Conditions were optimal for excitement in copper mining, and news of discoveries at Greenwater set into motion a frenzy of interest and investment by prominent industrialists and capitalists.

The list of prominent capitalists and mining men that rushed into Greenwater investments is full of famous (an infamous) historical figures. Among them are W.A. Clark and F. Augustus Heinze, two of Butte, Montana's "Copper Kings". Also on the list is Charles Schwab, a capitalist who's name lives on today with his banking empire. 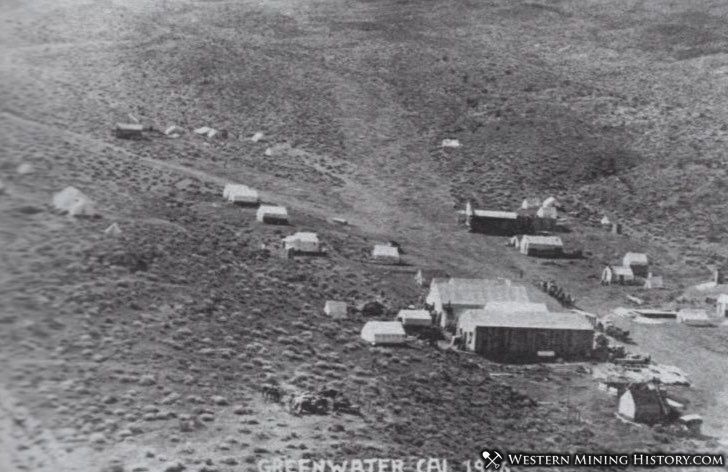 Early promoters of the camp were convinced that Greenwater was destined to be a great city of thousands of people. In May of 1907 the Los Angeles Herald gave the following optimistic report:

W. J. Wadhams of the Currier building, after a visit to Greenwater in Inyo county, is of the opinion that the famous mining town is too small and is bound to grow to a city of large proportions.

While at Greenwater Mr. Wadhams secured an option on several claims adjoining the original town, and is now preparing to place 3400 lots on the market. The prices average $125. The acreage is said to be rich in mineral value and buyers are likely to secure picture ore on premises selected Schwab Is building a new railroad to the smelter at Ash Meadows, the line to pass over the claims chosen by Mr. Wadhams.

By the end of 1906 Greenwater was said to have a dozen saloons, a good indicator that the town was lively and growing. However, as historical photos of Greenwater reveal, the town would never amount to much more than a tent city with perhaps a couple dozen wooden buildings.

By the spring of 1907 Greenwater was already in decline. The local copper mines did not produce the riches that were expected, resulting in men and capital pulling out of Greenwater ventures. Businesses closed, putting more out of work and the camp stagnated.

A lot was written about the excitement at Greenwater by newspapers of the day, especially the Los Angeles Herald. The decline in the frequency of articles written corresponds with Greenwater's changing fortunes. Many articles were written in late 1906 and early 1907, but by summer of 1907 the boom town wasn't getting much press. A couple of articles in the fall of that year were written in the tone of reassurance - that things were not as bad at Greenwater as people were saying.

While a couple of the mines in the district continued to sink shafts deeper in the hope of hitting a large ore body, most of the mines were idle.

By January of 1908 the town of Greenwater had just one saloon left, and just 50 people in the entire district. As was often the case in Western mining boom towns, the number of saloons in operation was indicative of the health of a town and mining district, and Greenwater was clearly on its last legs.

In August of 1908, Greenwater's post office closed. Some local mining continued over the next few years but not enough to keep the town alive. Greenwater was abandoned in 1909. The nearby town of Furnace survived for a couple more years as the copper mines continued sporadic development.

Today nothing is left at Greenwater. The town site is within the boundaries of Death Valley National Park.