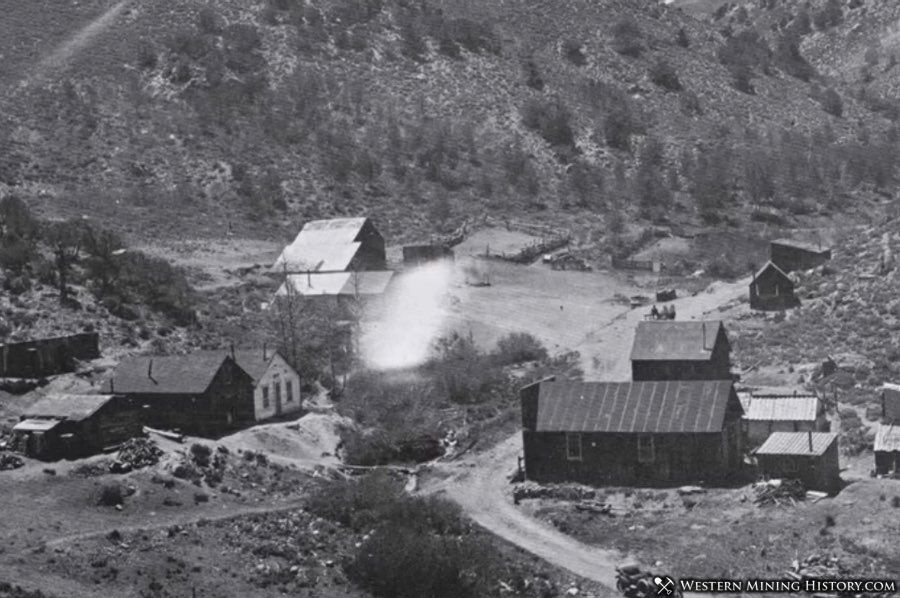 The Masonic Mining District is situated in Northern Mono County at an 8000-foot elevation, about 12 miles northeast of Bridgeport and 1-1/2 miles west of the Nevada state line. In the summer of 1860, prospectors came from the Monoville mines and discovered promising gold ore in the area. The new district was named Masonic because a majority of the workers were Masons. During the same period, the rich Aurora gold strike and the possibilities at Bodie created a boom, which took, attention away from the favorable finds at Masonic. As a result, only sporadic prospecting occurred during the next 40 years.

In 1900, Joseph Green, a 16-year-old boy from Bodie, found rich gold samples in the middle of the Masonic gulch and staked his claim as the Jump Up Joe Mine. Not having sufficient capital to develop the property, Green soon sold the mine to veteran Bodie miner Warren Loose in 1901.

On July 4, 1902, mining partners John Stuart Phillips, Caleb Dorsey and John M. Bryan located a rich quartz ledge on the southern edge of the district, which developed into the Pittsburg-Liberty Mine (named for Phillips' home town and in the spirit of the holiday).

The Masonic Mining District covered an area of about 6 by 12 miles. Individuals from Bodie and Bridgeport located and worked many other claims, or were financially connected, such as Mono County Clerk George Delury, Tax Collector Maurice Hayes, District Attorney Pat Parker and Bridgeport saloon owner Jack Sawyer, a Civil War Veteran. The desire to strike it rich resulted in the working of more than 40 claims during the mining peak. Besides the Pittsburg-Liberty and the Jump Up Joe, the more successful of the batch included the Serita, Myrtle & Julia, True Friend, New York, and Red Rock. There were additional claims in the district that were inside the Nevada state line and were registered with Esmeralda County, Nevada, as the Masonic Mining District.

In 1905, workers at the Pittsburg-Liberty were amazed when they discovered that a wall in one of their tunnels was in reality the side of a two foot-wide vein from one of their main ledges. The high grade ore assayed at $200 per ton.

Even though claims were not generally worked during the winter months, the Bridgeport Chronicle-Union newspaper in December of 1906, ran advertisements for men to work the mines, noting the high daily wages of $4.00 to $4.50 per eight hour shifts.

In September of 1907, the Pittsburg-Liberty opened a 10-stamp mill with 50 men on the payroll. The mill was a big operation and made the shipping of ore by team and wagon unnecessary. It included a dynamo, electric lights and 30 foot diameter water tank. About 30-35 tons of ore was treated daily. On October 1, 1908, a new cyanide plant began operation, which worked the tailings. Total mill production was about $700,000. In 1913, a cable and bucket aerial tramway was installed that brought the ore about a half-mile across the gulch from the mine. 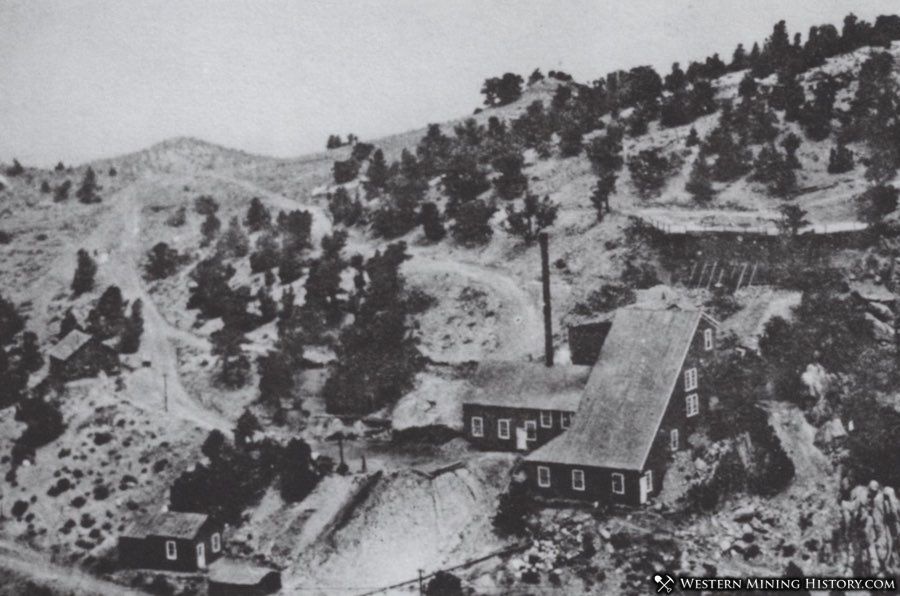 By 1904, new roads to Masonic from Bridgeport and Bodie allowed passenger and freight traffic. Lumber for buildings came from Mono Mills on the south shore of Mono Lake. It was first transported to Bodie on the Bodie & Benton Railroad and then hauled to Masonic in wagons over Geiger Grade by 6-horse teams, a distance of 48 miles. By 1906, a passenger stage line was operating between Masonic and Wellington, Nevada. In 1907, additional stage service began running between Masonic and the Conway Ranch in the Mono Basin.

Until 1904, prospectors lived in crude shelters and makeshift caves. The first solid structure was a cabin built for Mr. & Mrs. H. H. Carpenter in what became Middle Town. Made of aspen logs, it had a floor of one-inch boards and a glass-paneled door, a rarity in gold camps. On the south end of the gulch, the first real town in the district, Lorena, was established in 1904. Offices of the Pittsburg-Liberty Mine and the Masonic Mountain Gold Mining Company were located there and the first post office in the region was opened in Lorena on December 6, 1905.

The district at this time contained several hundred residents and it was a matter of time before other towns were established. A settlement about a half-mile north of Lorena was called Middle Town and another half-mile farther north was Caliveda, later known as Lower Town. Lorena was renamed Upper Town. All three eventually co-existed as "Masonic" and each began with a boarding house or small hotel. Local springs provided good water, and telephone service was installed in 1905, by A. S. Bryant, son of one of the first Bridgeport pioneers.

By the end of 1907, Lower Town boasted a hotel and two saloons. The Jeffry Hotel and one saloon were operated by Mr. & Mrs. John Jeffry, the owners of the Occidental Hotel in Bodie. The other saloon was owned by Bridgeport resident Ed Murphey.

Middle Town merchants included a livery stable, the Frank L. Wedertz Butcher Shop, a combination hotel/boarding house operated by Minnie Smith, and the Harvey Boone & Son General Store. Wedertz also operated a shop in Bridgeport and Boone owned another store in Bodie. In Masonic, the Boone Store provided clothing, liquor, cigars, hardware and miner supplies such as blasting power, all of which were delivered and miner supplies, such as blasting powder, all of which were delivered to the store by pack train, and the store served as the stage station. Boone was the Postmaster between 1909-1912 and 1914-1917, and he was also the Secretary/Treasurer of the Myrtle & Julia Mining Company.

The Masonic Pioneer newspaper was first printed on November 8, 1905, by George Montrose, editor and publisher of the Bridgeport Chronicle-Union. The Pioneer lasted only 2-3 years before it folded, but Masonic news continued to be printed in the Bridgeport paper. Montrose was very active in the boom as the President of the Myrtle & Julia. He also sold insurance and real estate, but with a sense of humor. A running ad in his newspaper read, "Wake Up! Tell your wife the good news and hide for Masonic. See that fellow Montrose-The Masonic town site man".

Even though the camp population grew to about 1000 people, there were no churches, fraternal organizations, or brotherls in the district. Dances were popular, as reported on September 12, 1908, of a dance in Lower Town: "Over 50 couples tripped the light fantastic to the excellent strains of the Bodie Orchestra. Supper was served at the Jeffry Hotel."

Dr. E. T. Krebs of Bridgeport visited the camp often to provide medical treatment, but not for injuries from shootings or other violent actions. The district was proud of its quiet and diligent work ethic.

In 1909, rich ore was found 3 miles west of the gulch. The strike became known as the Chemung Mine. But the Pittsburg-Liberty and the Jump Up Joe mines were reportedly the only consistent bullion producers. In 1910, the Pittsburg-Liberty opened an additional mill called the Chilian to increase production. In February, 1911, the company reported striking a 2-foot-wide vein, assaying at $1000 per ton. Other Masonic claims continued to show promise but in 1911, a decline began. The ore generally followed no pattern. Rich pockets were worked and exhausted in a relatively short time. Production totals were vague, because a majority of the claims were worked by so many private interests.

The only school in Masonic was opened in 1911 in Middle Town and was closed by 1929. Merchant Minnie Smith was the first teacher. Maude Sturgeon was teaching when Doris Welsh Folsom, 93, of Reno, Nevada, attended between 1915 & 1918. Doris' carpenter father, George Welsh, framed timbers in the Serita Mine. Her mother, Mary Welsh, was the Postmistress from December, 1917 until January, 1919. Doris still remembers Middle Town having a stable, hotel and a store. She later became an 8th grade teacher and a principal in Reno. Doris is a cousin to Bridgeport stalwart Alice Dolan. 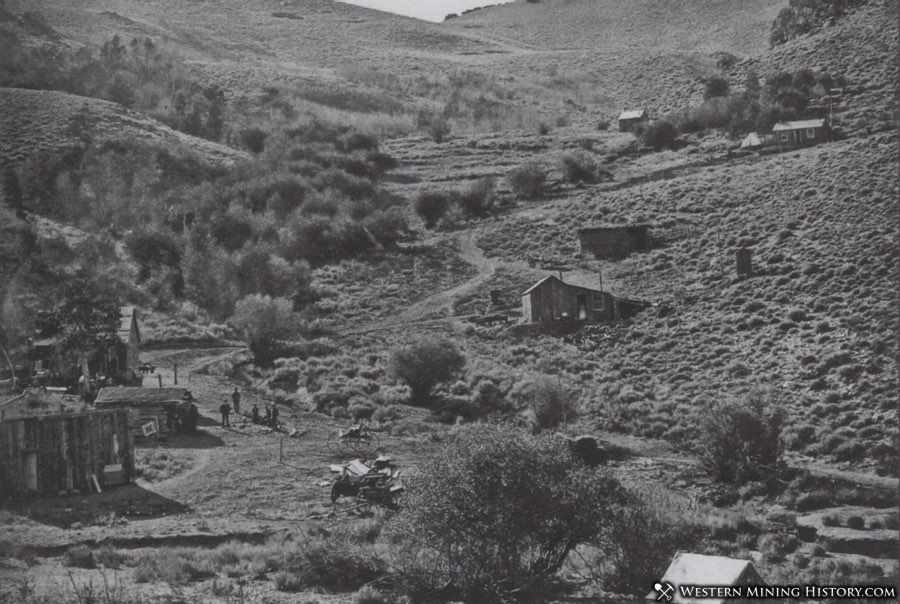 The peak of mining activity occurred between 1906 & 1911. Masonic was considered at the time to be the premiere ore producer on the California-Nevada border. The Southern Pacific Railroad briefly considered running a line between Aurora, Bodie, and Masonic. In August of 1911, miner Clarence Wedertz commented that only Postmaster Harvey Boone and one resident remained in Middle Town and there was no one living in Upper Town. Most of the activity was now centered with the Pittsburg-Liberty Mill in Lower Town.

During 1911, the Pittsburg-Liberty became involved in a lawsuit with its general manager and the mills began losing money. To Add to the company's troubles, the Chilian Mill began breaking down on a regular basis. The original mill had been for sale since 1910.

Miners were still optimistic. In January 1912, a strike was made at the Serita claim, which "promises to bring the camp back into the limelight." In 1913, George and Fred Stall bought the Serita for $25,000 and the Pittsburg-Liberty property for $100,000. The old mill was $50,000 in debt, but plans were made to remodel it and place it in running condition with 3 shifts of miners. The ore cable system was installed at this time.

The Stall Brothers Mill was not in use when it was sold in March 1920, to A.G. Cook & Eastern Associates for $32,500. Cook was connected to the Chemung Mine. During 1920, the Chemung was extracting both low and high grade ore, but operations were held back by the prevailing high prices of mining materials. With a recession and the low price of gold, it was not cost-effective to ship ore to the smelter. The closest working mill was in Bodie and the road from Masonic had become difficult to use.

Elton "Heinie" Heinemeyer worked the Chemung during the 1950's & 60's, but he never struck it big. Heinie was well liked and his welfare was a concern to Bridgeport locals. He was never too busy to entertain anyone who came to visit and check-up on him.

Between 1920 & 1929, there were occasional discoveries of new ore veins in the Masonic gulch. Only 12 registered voters were living in Masonic in 1924. In 1929, the Serita reopened for a short time, but there was no longer large-scale production in the area. By the mid 1950's there was no one living in the old camp. Only remnants of the old mill and several buildings remain now to remind one of what it must have been like.