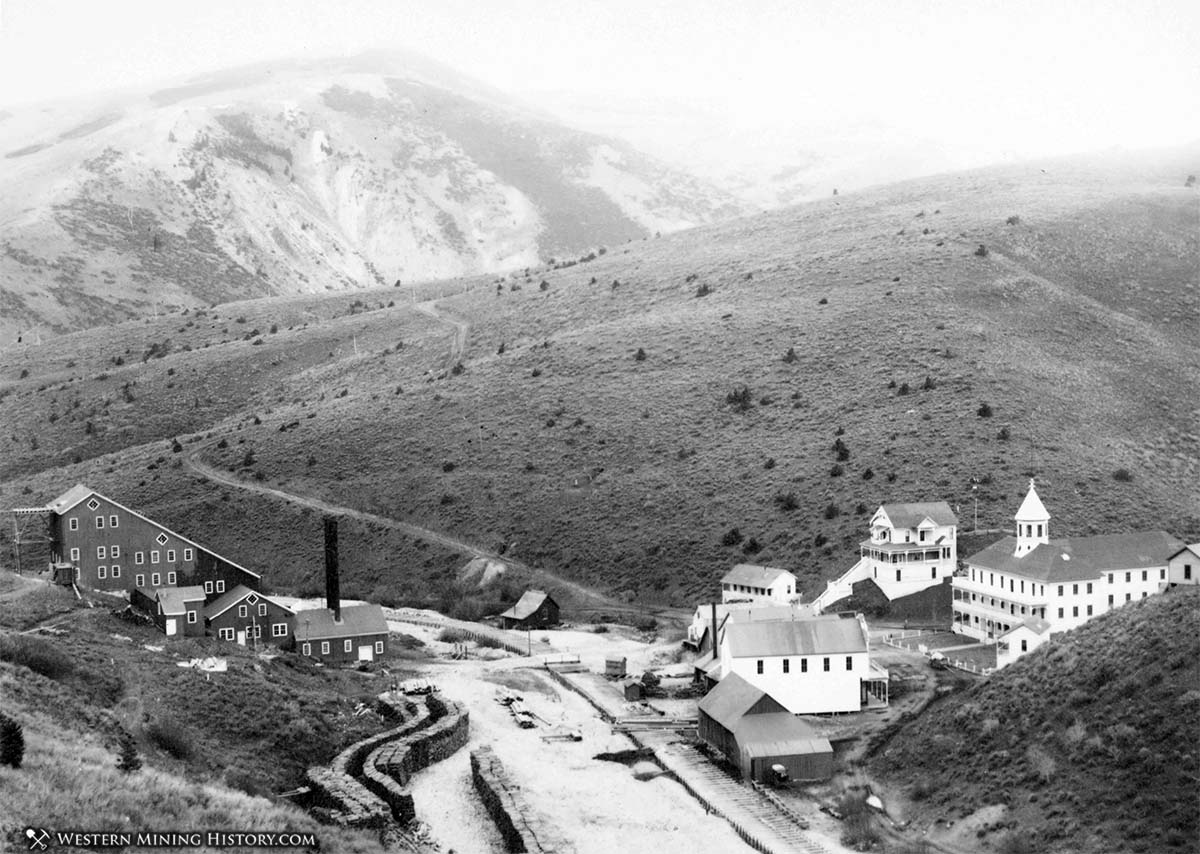 Dewey was established at the location of the former town of Boonville, which was the first permanent settlement in the Owyhee Mountains. When the Jordan Party discovered gold in the area in spring of 1863, they formed a temporary settlement called Happy Camp, where they organized the first mining district. By fall of that year a more permanent settlement had formed, which they named Boonville.

By spring of 1864, Boonville had a population of about 250. Ruby City had been established higher up in the canyon near the site of a lode mine discovery, and it also had about 250 residents. 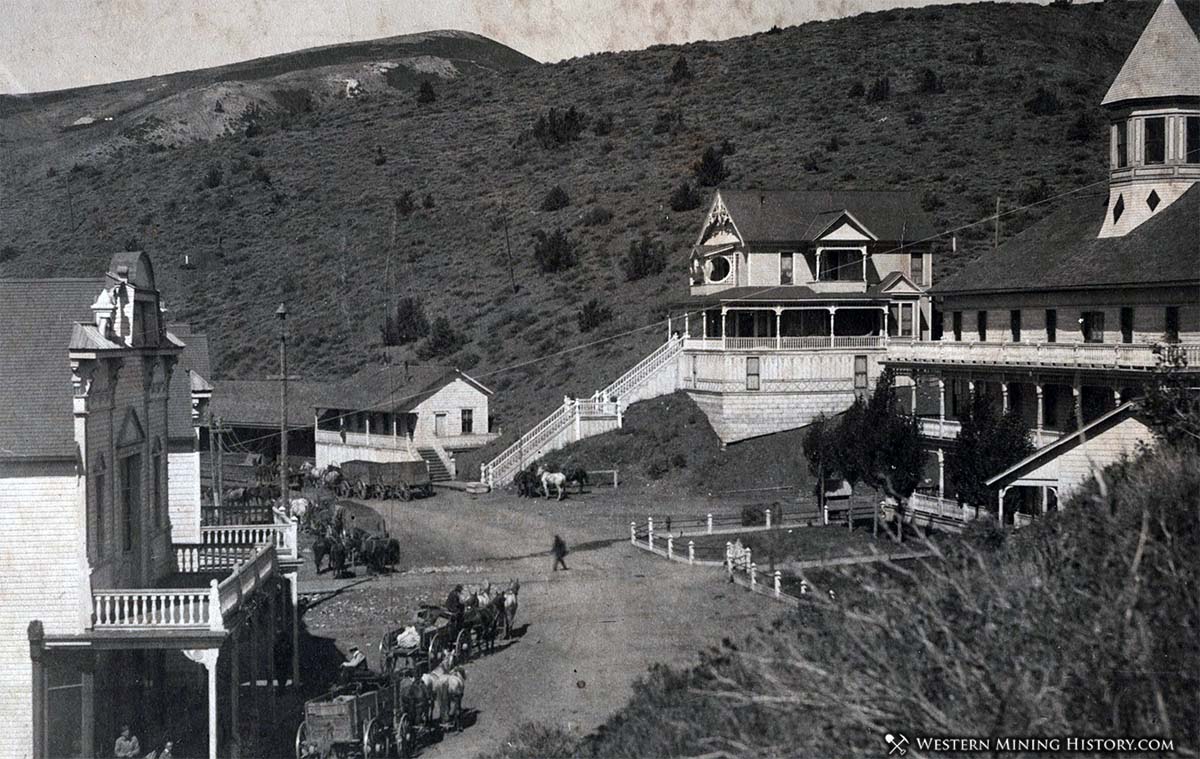 Boonville was located among the placer gold mines and the town faded quickly as the mines were exhausted. By the fall of 1865 most of the miners had moved on to Ruby City and Silver City. An October 13, 1865 edition of The Idaho Statesman mentioned Boonville:

"Boonville, which last year made considerable pretensions to a mining camp, and talked largely of competing for the honor and consequence of being the largest town in Owyhee county, has collapsed. Boonville has had its day, and now consists of a dozen or so empty houses and three or four inhabited ones. The placer mining along Jordan creek is now reduced to what can be done with a single sluice head of water, and the claims that are being worked with that are far between. I am told that those still working are paying well, but they are mostly worked out; so the days of placer mining in Owyhee county, and especially on the Jordan, are about gone. No one seems to think of the loss, however, for the rocker and the sluice have ceased to be taken into account in view of the overwhelming interest of quartz."

Note: many sources give the spelling of this town as "Booneville", however based on historical documents it appears that "Boonville" was the original name. 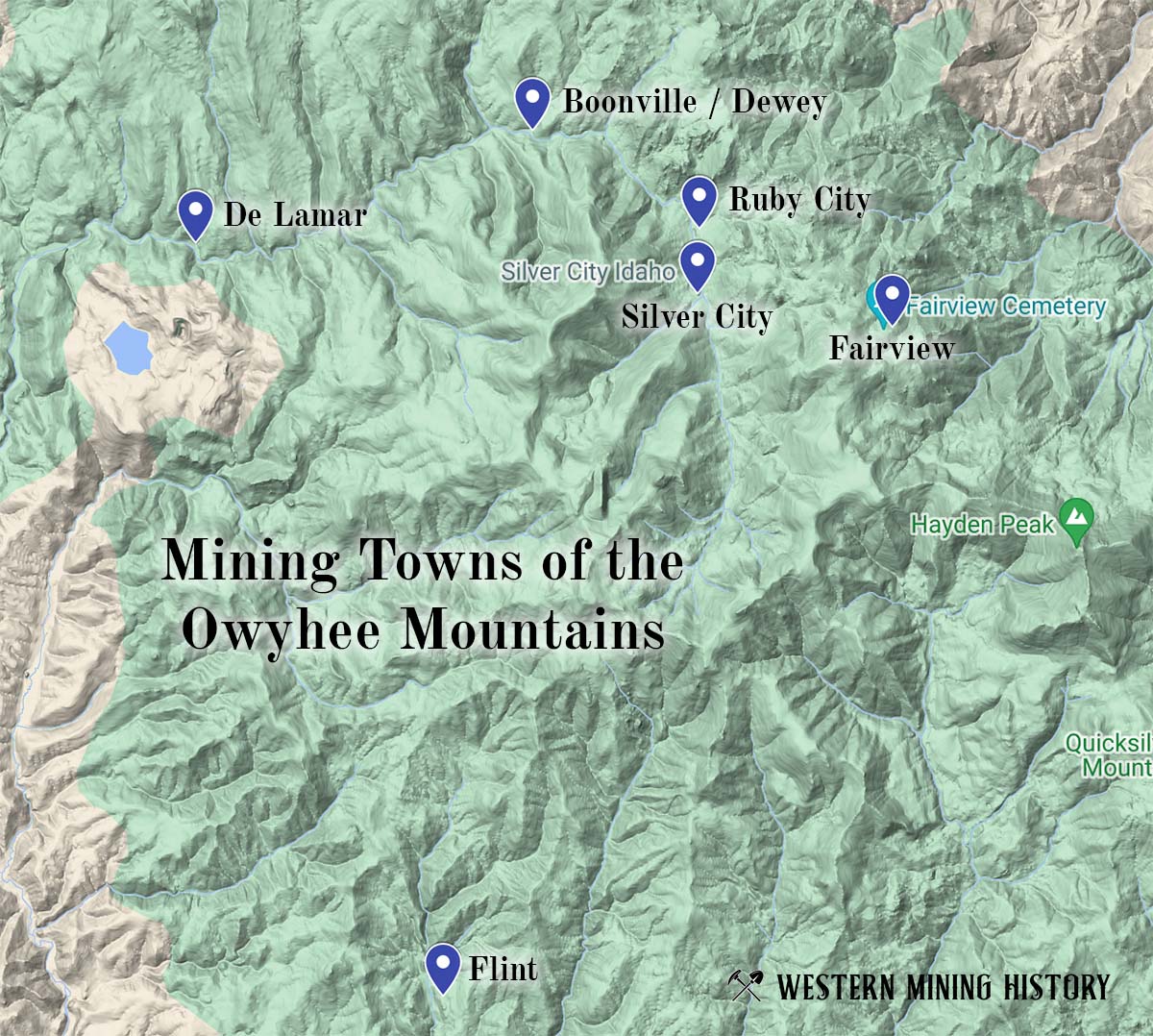 Dewey is Established in 1896

Early mining in the Silver City area was primarily focused on high-grade quartz deposits. Large quantities of lower grade ore were known to exist, but improved technology and increased levels of development and capital were needed to mine it. W.H. Dewey had been working his Black Jack Mine intermittently since 1878, and by the mid 1890s, as the superintendent of the Florida Mountain Mining Company, he was ready to make significant new investments in mining infrastructure. He purchased the Boonville townsite to serve as a milling center, and established the town of Dewey.

The 1898 publication A historical, descriptive and commercial directory of Owyhee County, Idaho gave an overview of the rise of Dewey at the old Boonville town site:

"The town of Booneville was first settled in the summer of 1863, the first inhabitant being Captain Boone, from whom the town was named. For a time the town enjoyed a large population, and was in a very prosperous condition; but subsequently fell into decay, and for a good many years was simply a stopping place for wayfarers, stages and teamsters, the only building of prominence being the old Booneville hotel.

"In the spring of 1896, the hotel and surrounding property was purchased by Colonel W. H. Dewey, and operations were at once set on foot for the improvement of the town.

"During the summer of 1896, the Florida M. & M. Co. erected a twenty- stamp mill, which is by far one of the largest and best equipped in the West.

"The Hotel Dewey was also erected, a large and commodious building, whose appointments and architectural structure are unequaled by any hotel in the state. The building is of the "Southern hotel" order, three stories in height, surmounted by a large cupola, and fronted with a double portico. The building is thirty by sixty feet, with an "L" of thirty by seventy-eight feet. To the left of the hall are the bar rooms, card rooms and store rooms, the bar fittings being very elaborate, and unexcelled in this section of the country. 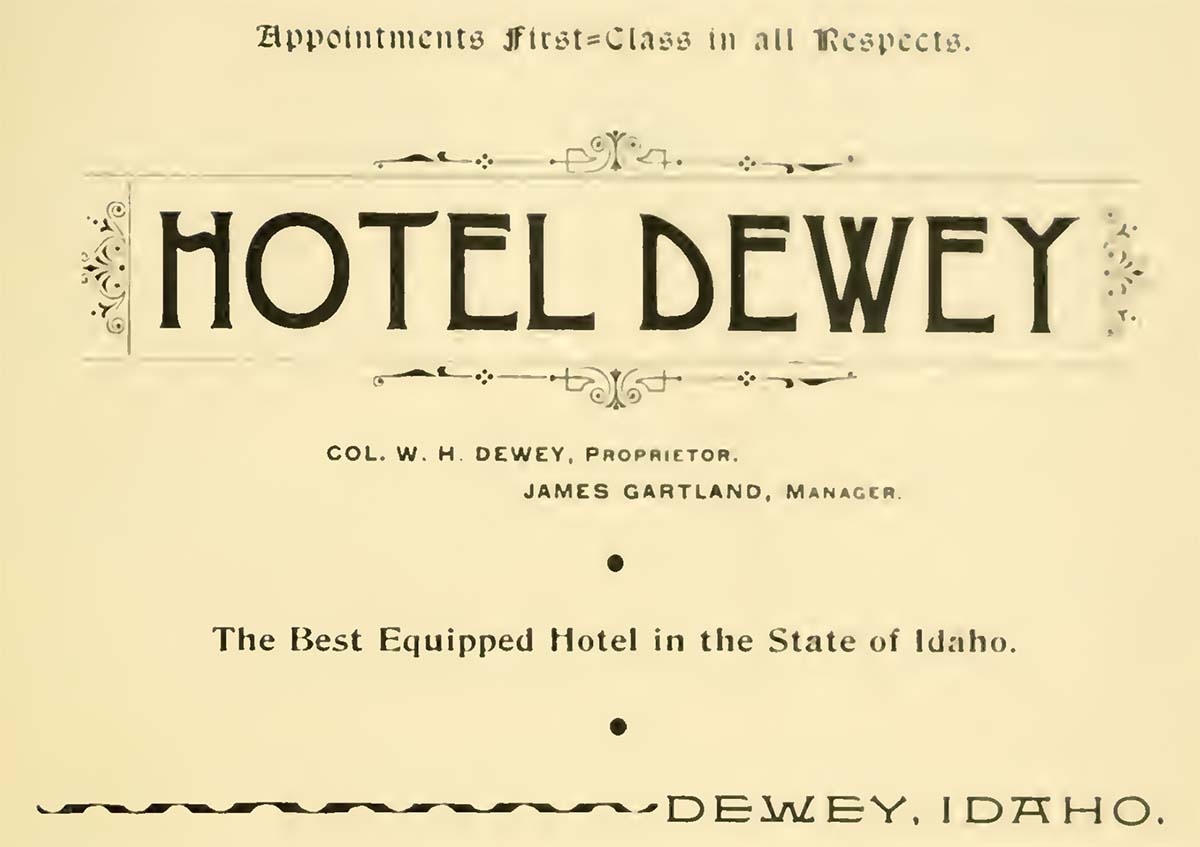 "To the right of the hall are the offices, reading room, billiard room and wash room. The hall terminates with the dining room and kitchen, and the upper stories are devoted to parlors and rooms single and en suite, elegantly furnished with modern style furniture, equal to that of any caravansary on the coast. In the third story is a large hall, completely fitted up for theatricals, dances and other amusements. The hotel is heated by steam heating apparatus of the latest pattern, and lighted by an electrical plant supplied by the mill, and the sanitary and sewerage conditions are as perfect as can be made by labor and science.

"Adjoining the hotel are the offices of the Florida M. & M. Co., and the residence of the superintendent, both of which are of modern design, artistic structure and substantial erection.

"The water facilities and fire system of the town are the best to be found in any mining camp this side of the Rocky mountains, the water being piped from natural springs located nearly two miles from the town, and conveyed to tanks having a capacity of 1,500 barrels, situated at an elevation of about 350 feet on the hill east of the hotel, giving a pressure of about 240 pounds to the square inch through a four-inch main, to 12 fire plugs located in different parts of the town; and thereby securing for the town an almost complete immunity from fire.

"There has also been constructed an ice house and slaughter house, and, in fact, nothing has been neglected in the way of making the town complete as to conveniences for its inhabitants, as well as an illustration of what can be done by applied energy and industry.

"In the spring of '97, through the efforts of Colonel Dewey, a post office was established, and the name of the town changed to "Dewey," in compliment to its founder, and Mr. James Gartland, the genial accountant of the F. M. & M. Co., and affable manager of the Hotel Dewey, received the appointment of postmaster.

"The town of Dewey is located at the base of Florida mountain, and in easy distance of all the principal mining properties located on that mountain, and is also the terminal point of the B. N. & O. R. R. Company, now in course of construction."

Contrary to what was reported in the text above, the planned railroad line to Dewey was never built. The Hotel Dewey burned down after just a few years, despite having state of the art fire protection. As mining declined, so did the town. The post office closed in 1911.

A historical, descriptive and commercial directory of Owyhee County, Idaho provides a biography of W. H. Dewey, a pioneer of the Owyhee mining region:

"Dewey, Colonel W. H., was born in New York state in 1822, and came to Owyhee in the fall of 1863, to the then town of Ruby City; but owing to a "hog-em" real estate crowd in that town, he, in company with others, located a rival town—Silver City—the following spring, and eventually Ruby City moved up to the new location, bag and baggage.

"In April, 1864, Mr. Dewey built the first wagon road to Ruby and Silver, and in May of the same year started work on the Reynolds creek road. At the time of the South Mountain activity, from 1871 to 1875, he owned nearly one-half of that prosperous camp. 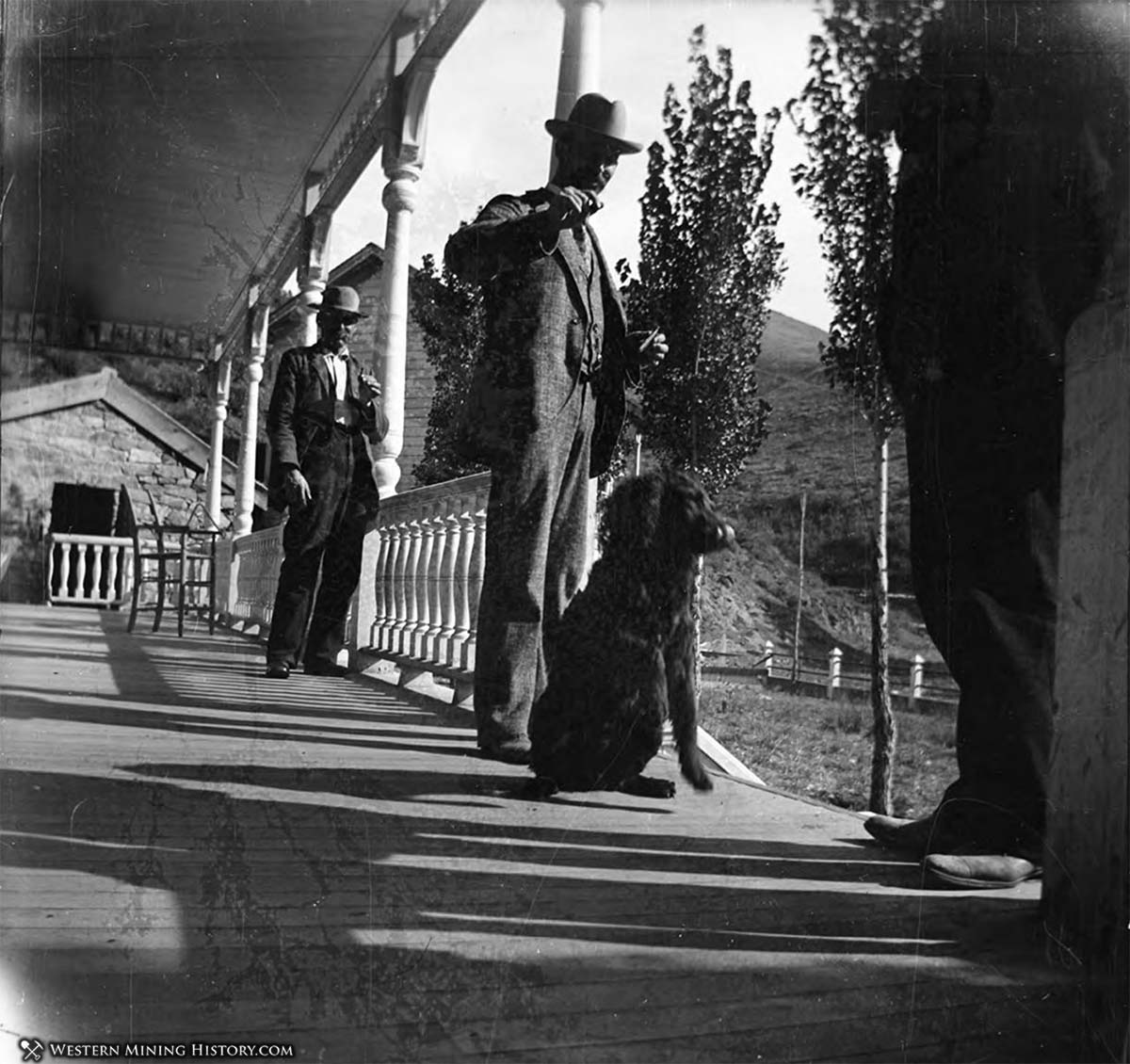 Colonel W.H. Dewey on the porch of Hotel Dewey 1898

"For over twenty years past Mr. Dewey has been engaged in mine operating and promoting. He sold the Black Jack group to a Pittsburg company in 1889, and in 1892 disposed of the Trade Dollar group to another Pittsburg company. Both of these properties have proven fabulously rich, and are large and constant dividend payers. In 1895 he organized a company upon the Boonville group of mines, on Florida mountain, and in 1896 extensive improvements were made upon the property; but, with the exception of a short run to test the mill machinery, the property has been closed, with the exception of a prospecting force.

"Considerable valuable ground has been blocked out in the mine, and orders to resume work on a large scale are expected at any time. In 1896 Mr. Dewey incorporated the Boise, Nampa & Owyhee railroad, and started work on the same. It connects with the Oregon Short Line and Idaho Central railways at Nampa; at present has its terminus at Guffey, in Owyhee county. The present season will see it well up into the Owyhee mountains. The bridge across Snake river (illustrated in this book) is one of the finest steel structures in the West.

"Mr. Dewey has other large mining and property interests in this county, and notwithstanding his advanced age, seventy-five years past, is recognized as one of the leading spirits in public improvement and development. Much of the prosperity of Owyhee is due to his untiring energy and labor in this section's behalf."