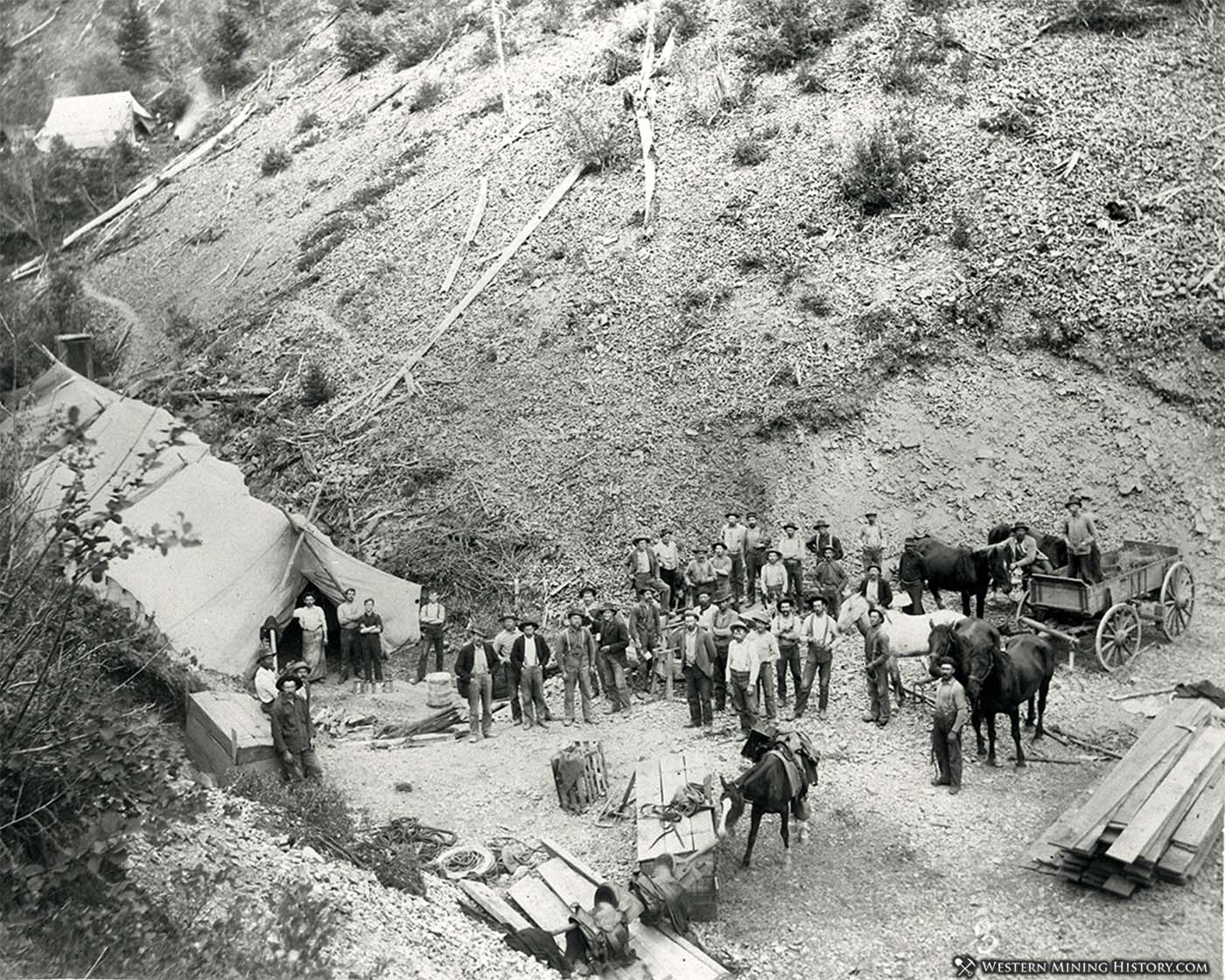 In 1895 rumors circulated of a carload of ore that was reported to have assayed with unprecedented amounts of gold. The rumors touched off a gold rush to Brewster Creek on the lower end of Rock Creek, a tributary of the Clark Fork of the Columbia.

At the height of the rush 2,000 people scrambled for riches in and along the creek and the town of Quigley was founded at the mouth of the creek.

Grover Cleveland, then President of the United States, and other prominent investors also listened to the rumors and threw 1.5 million dollars into capitalized development in the district. This investment resulted in the development of three mines, erection of a stamp mill and the grading of a 12 mile railroad bed up Rock Creek.

A 7.5 mile aqueduct was excavated to provide Rock Creek water to the mill at Quigley. The railroad bed was built with Chinese labor and was to connect Quigley with the Northern Pacific. However, all the development and related activity was based upon a wild rumor; in reality, the mines contained little or no gold. In 1896, one year later, town and mines were abandoned while the railroad bed and aqueduct were left in a partially constructed condition.

The gold rush, which turned out to be a "humbug", did result in one producing mine, the Golconda. The Golconda was first developed by the Golden Sceptre Mining Company in 1896. A shaft was sunk, probably to the 100 foot level, but no paying ore was discovered. The company, unable to make any return to defray expenses, collapsed with the district.

The next July, the Alps Mining Company, took over the property. The new company was rumored to have heavy financial backing from St. Louis. The mining operation was put in the charge of J. W. Opp, superintendent. Eleven men were reported to be working in the mine.

Apparently, the new endeavor immediately discovered paying ore at the bottom of the previously dug shaft. The shaft was sunk through the high grade ore to the 125 foot level. A cross cut determined the ore body was 18 to 20 feet wide. The ore was free-milling and assayed at $200 per ton.

To define the extent of the ore body, a $5,000 bond was taken out on the adjacent Gold Bug claim. The Alps Mining Company then prospected the mine. Later, the company erected a 10-stamp mill that was rated at 30 short tons per day. This mill was still active in 1912.

The last reported shipment from the Golconda and Gold Bug mines was oxidized copper ore shipped to Anaconda for smelting in 1931.

The second area of historic mining occurred near the East Fork of Brewster Creek primarily centered on the Rainy Day mine. Little other mining occurred in the district. The Rainy Day mine was a consistent producer with some production reported nearly every year between 1911 and 1928. In 1923 a 5-stamp mill was reported to be operating on the property.

The Alps mining district is located at the north end of the Sapphire Mountain range. It centers around Brewster Creek, a tributary of Rock Creek. Rock Creek empties into the Clarks Fork about five miles below the mouth of Brewster Creek. Geologically, the district is underlain by rocks of the Belt series which have been intruded by stocks of granitic rock.

Text courtesy of the Montana DEQ