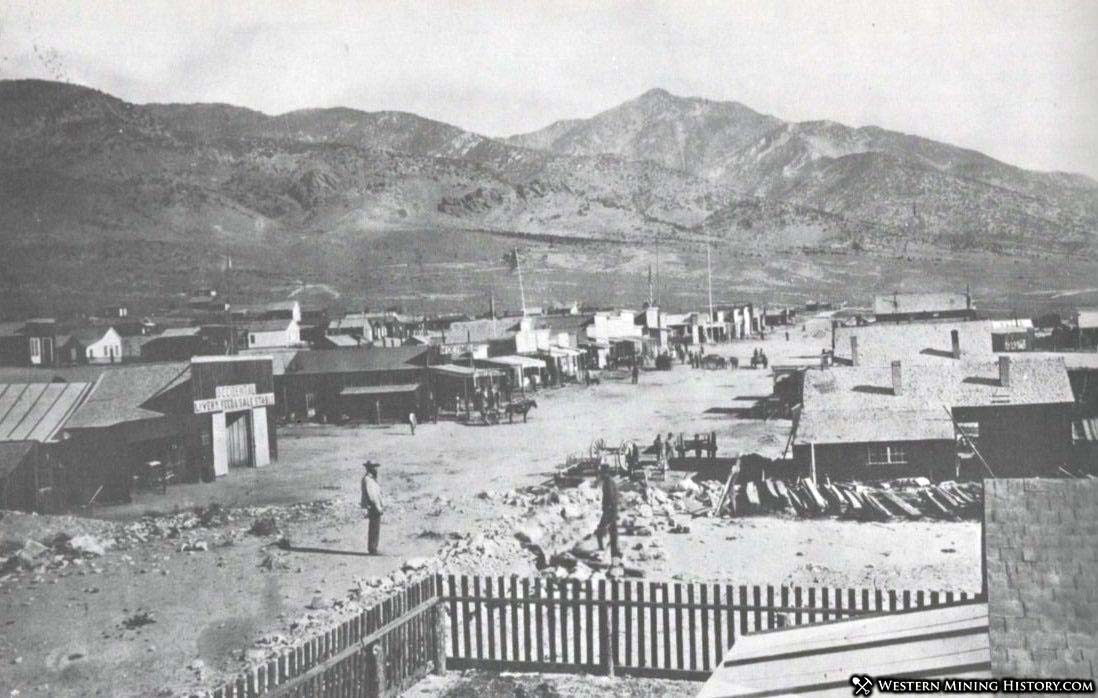 The Cherry Creek region is one of Nevada's oldest mining areas. Gold was mined as early as 1859 and a Pony Express station was located five miles south of Cherry Creek in 1860.

The town of Cherry Creek was established in 1872 after new discoveries in the area resulted in an excitement that drew many miners away from the White Pine district. By 1873 the town had a livery stable, blacksmith, hotel, boarding houses, and more than twenty saloons. 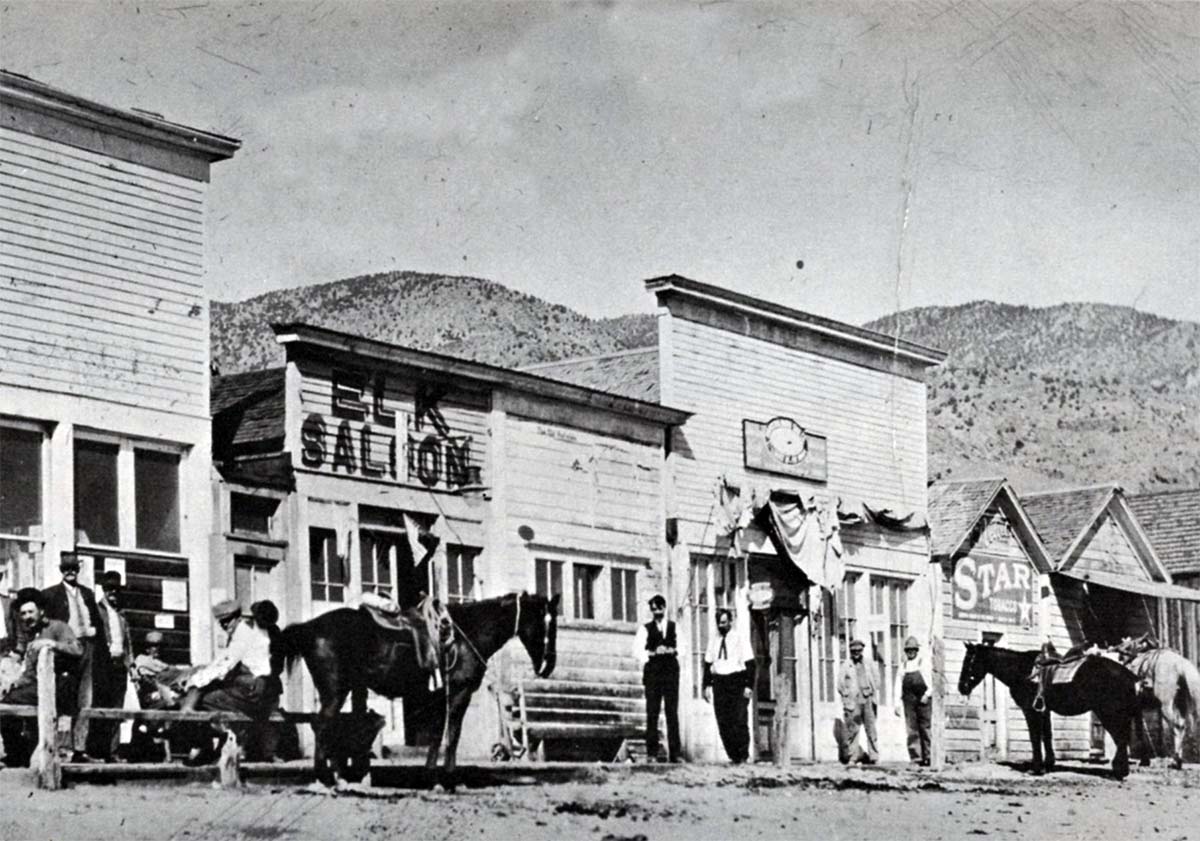 Businesses at Cherry Creek Nevada, including the Elk Saloon

Cherry Creek's initial boom period only lasted from 1872 to 1874 when production at the mines began to decline. The district was quiet until 1880 when new discoveries stimulated the local mining industry and gave the town new life. 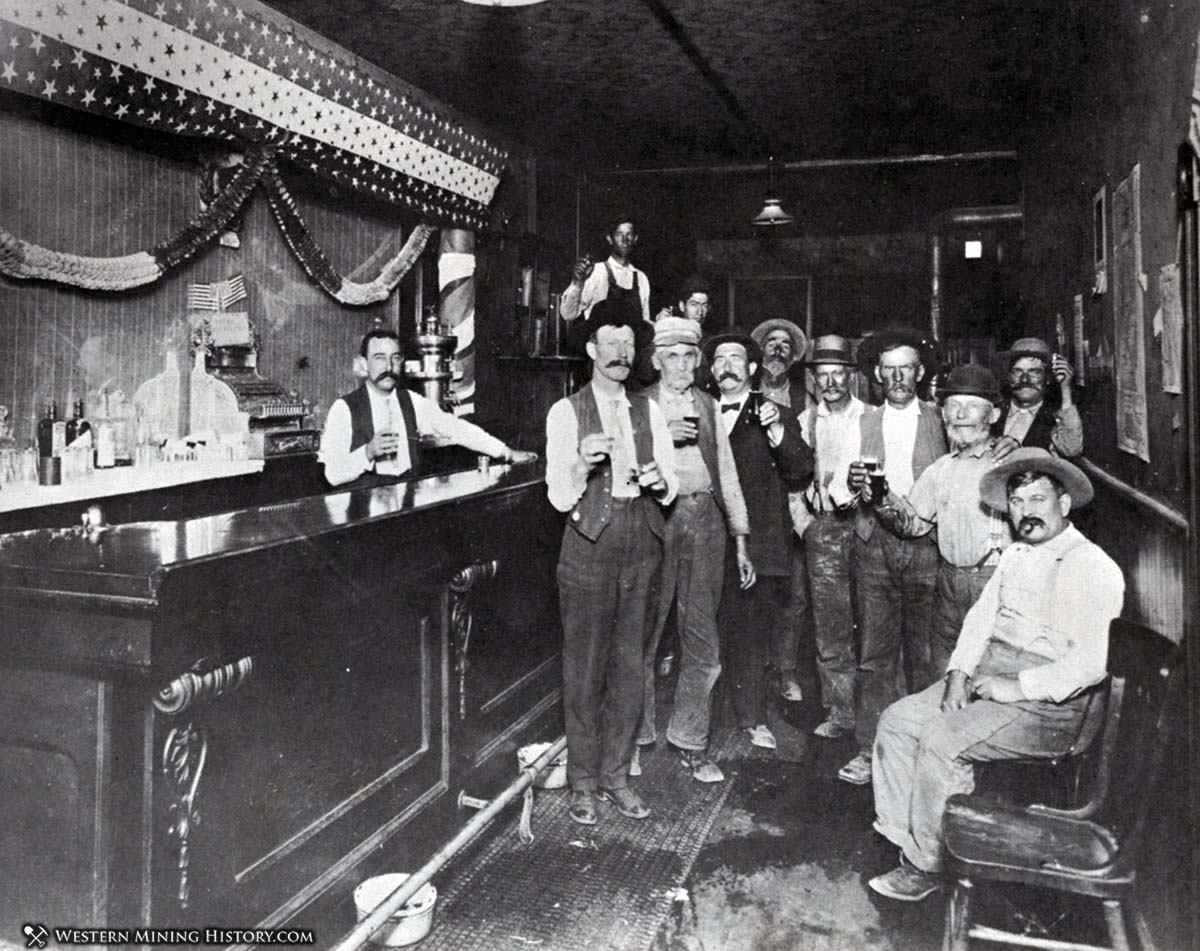 The mines once again declined in 1883 and the town declined with them. A fire in 1888 destroyed many of the original buildings.

Cherry Creek would have more resurgences than most Nevada mining towns and the mining industry remained the mainstay of the local economy until the 1940s. A post office operated here from 1873 to 1974.

Cherry Creek still has a small population of around 70 residents, but no operating businesses. The historic school house, built in 1872, still stands. 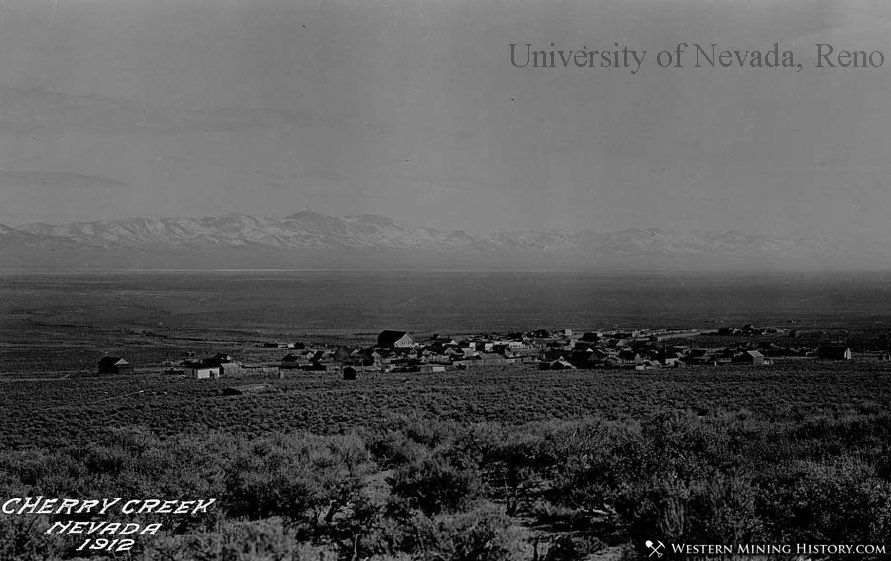 "Here, at one time, was the largest town in White Pine County. Part of the Cherry Creek Mining District, Cherry Creek's years of largest gold and silver production were between 1872 and 1883. At the peak of its prosperity, the town had an estimated population of 6,000" 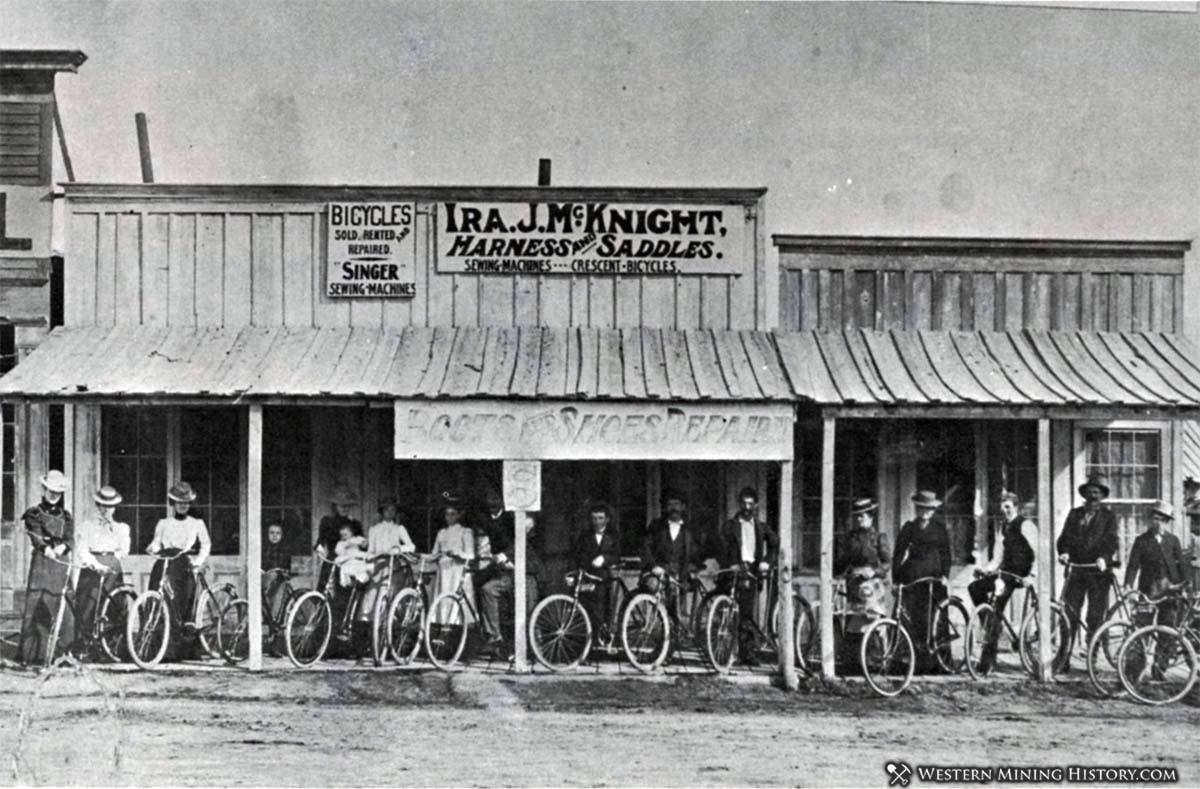 "Five miles south of here is Egan Canyon, where one of the oldest gold mines in Nevada was located. Indians mined gold there. A stage station was located by Major Howard Egan in 1859 for Woodward and Chorpenning's California Mail Co. in 1860. It was used by the Pony Express as a change station, and from 1861 to 1869 was an overland stage station." 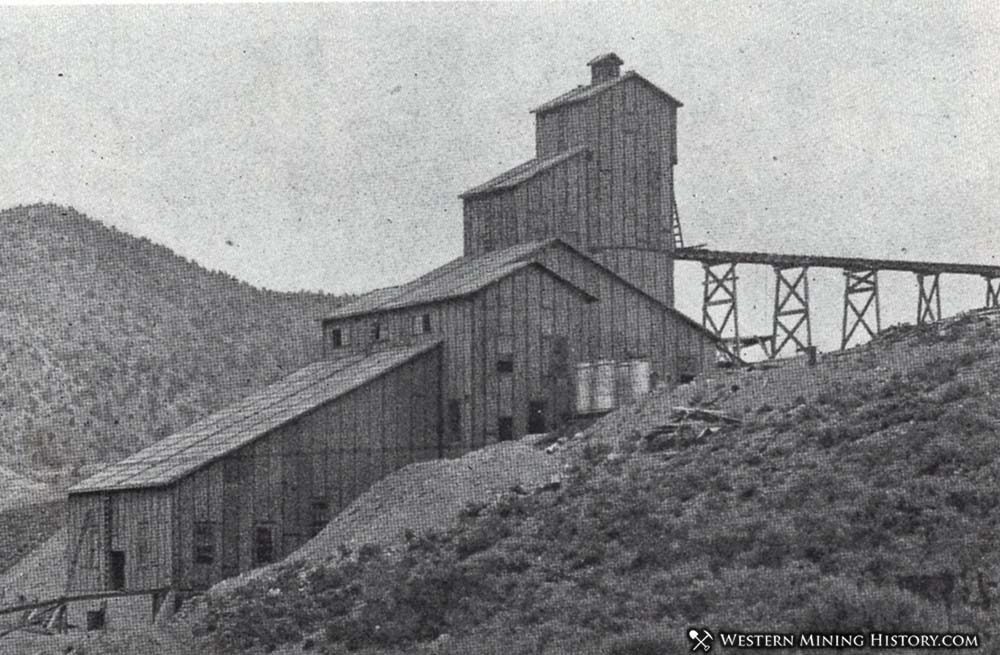 "In 1864, A five-stamp mill, the first such in eastern Nevada, and a small mining camp were constructed. Most of the early activity had ceased by 1883, but in 1897 there was a great revival in mining activity, which lasted into the early 1900s. During this period, prior to the completion of the Nevada Northern Railroad in 1906, freight and passenger traffic was via long strings of massive freight wagons and stagecoaches from Toano and Wells."

"In 1933 the old mine was reopened and a new camp was built. Production from the Egan Mine over the year has been approximately $3,000,000." 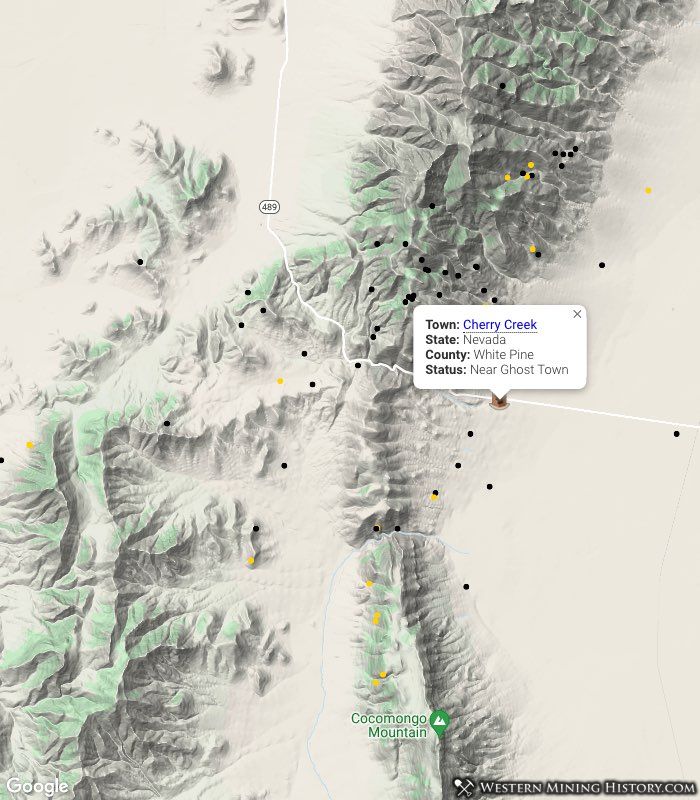 Map illustrates location of mines near Cherry Creek, Nevada. Yellow dots are mines with gold listed as a primary commodity