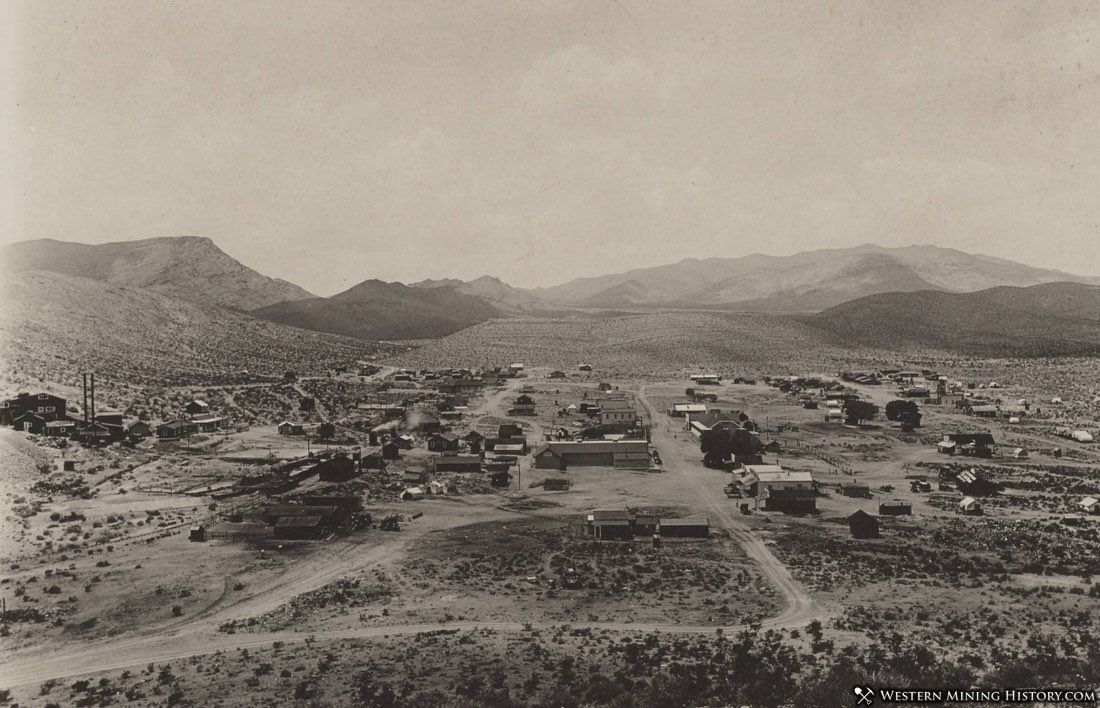 A district was formed here after silver-lead discoveries in 1868. However the mines weren't rich enough to justify mining in such a remote location so most of the miners involved in this early effort moved on. Miner and cattleman Joe Good remained at the site and the local springs were named after him.

Interest in the areas mines was renewed after new lead ore discoveries in 1886. Development work on mines began in earnest and the settlement of Goodsprings became permanent, although a post office was not established until 1899. 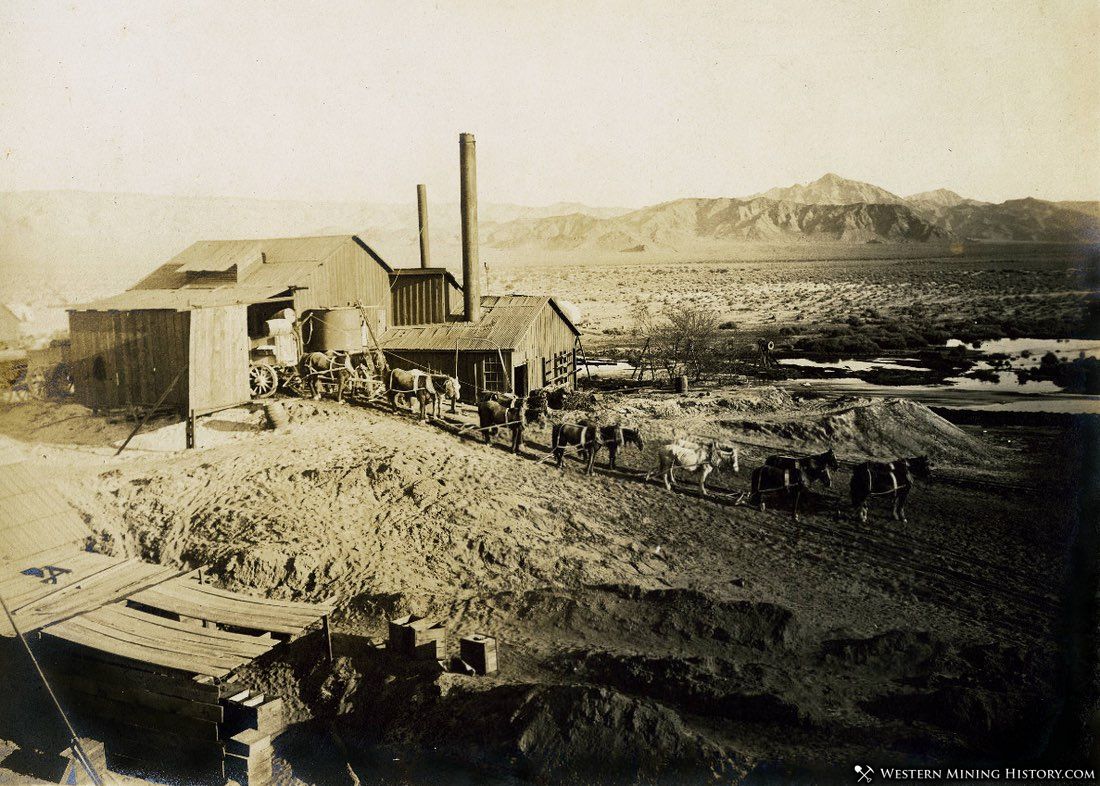 The completion of the Southern Railway from Goffs to Manvel, 45 miles south of Goodsprings, stimulated prospecting in the area and in 1892 the Keystone gold mine was located. The discovery brought new miners to the district and by early 1893 Goodsprings had over 200 residents. The Keystone mine was active until 1906 and produced around $600,000, mostly gold. 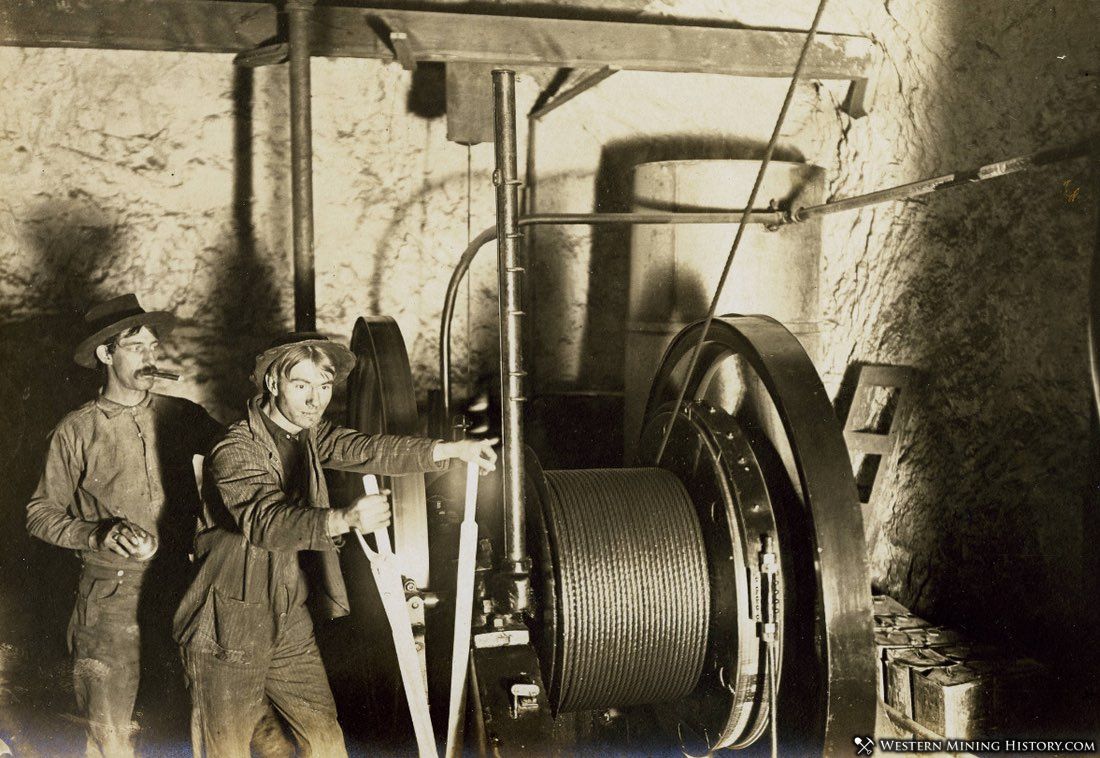 Hoist operator at the Keystone Mine - Goodsprings, Nevada 1910

In 1905 the San Pedro, Los Angeles, & Salt Lake Railroad completed a line to Jean, just seven miles from Goodsprings. The distance ore had to be hauled by wagon was drastically reduced and ore production from the district increased fourfold in less than a year.

Another important event occurred in 1905 when the when a mining engineer discovered that the heavy gray-white ore that had been discarded as waste was actually high-grade zinc ore. Now that they knew what they were looking at, several large deposits of high-grade zinc were identified and the Yellow Pine Mining Company was reorganized to begin large-scale zinc production. 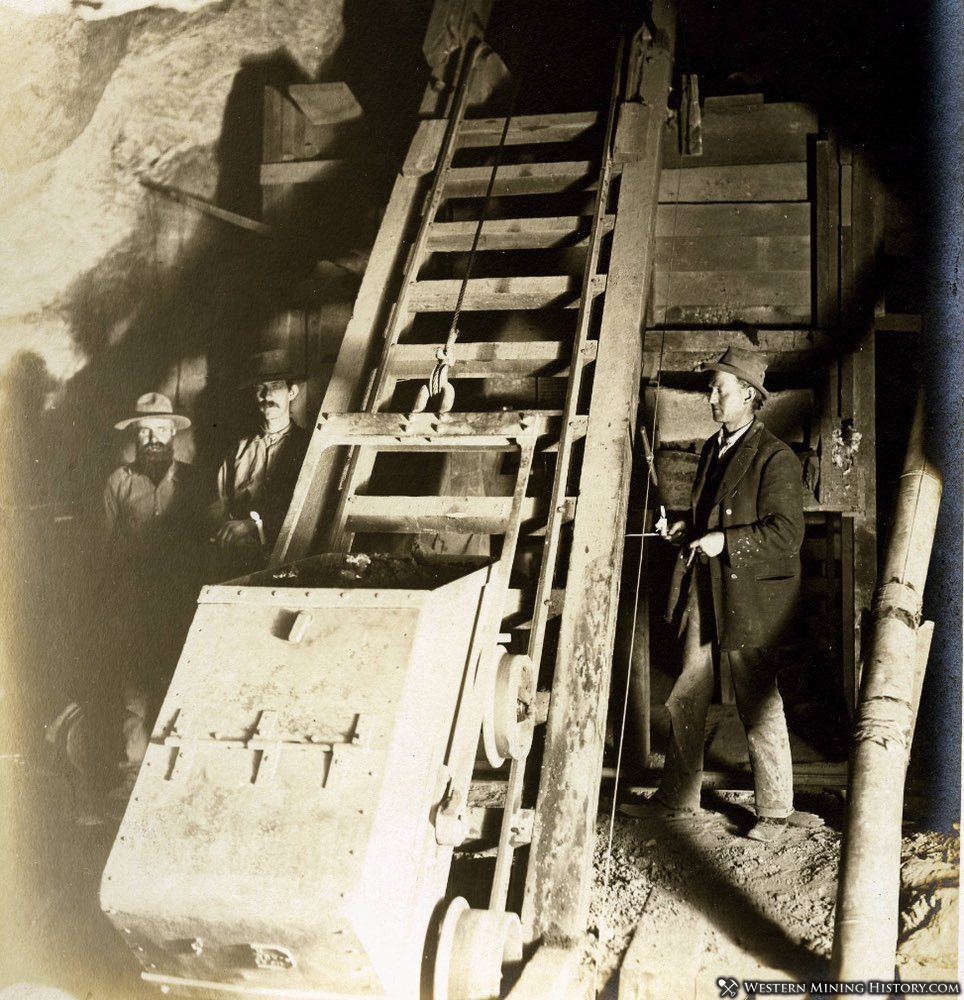 Miners in the Keystone Mine - Goodsprings, Nevada 1910

Advances in techniques for milling the lead-zinc ores of the district and construction of a 75-ton concentrator resulted in continued growth of the Goodsprings mining industry. By 1912 the annual production surpassed one million dollars.

While Zinc, Lead, and Gold were the primary metals mined here, other metals were also of interest. A 1914 edition of the Los Angeles Herald reported on a platinum and palladium mine discovery:

Claiming that it is the first discovery in America of the mineral palladium In commercial quantities, W. C. Price, 809 Hollingsworth building, mining man and capitalist, announced today the purchase of the Boss platinum gold mine at Goodsprings, Nev., by a syndicate made up of himself and San Francisco bankers.

Additional news from the Boss platinum mine was reported by the Sacramento Union in 1917:

The Plant being constructed at Los Angeles by the Los Angeles Platltinm company Is expected to soon be ready to treat regular shipments of platinum ore from the Boss mine near Goodsprings. The high price of palladium, now quoted at $125 an ounce, and platinum at $110 per ounce, makes the ore from the Boss mine a very desireable product. Steady shipments of copper ore are being made from this property.

The district peaked during the wartime years of 1915-1918 when demand for lead and zinc skyrocketed. The Goodsprings mines produced over 85 million pounds of zinc and millions of pounds of lead during these years. The Yellow Pine Mining Company was the district's largest producer, but over 50 smaller mines were also in production. 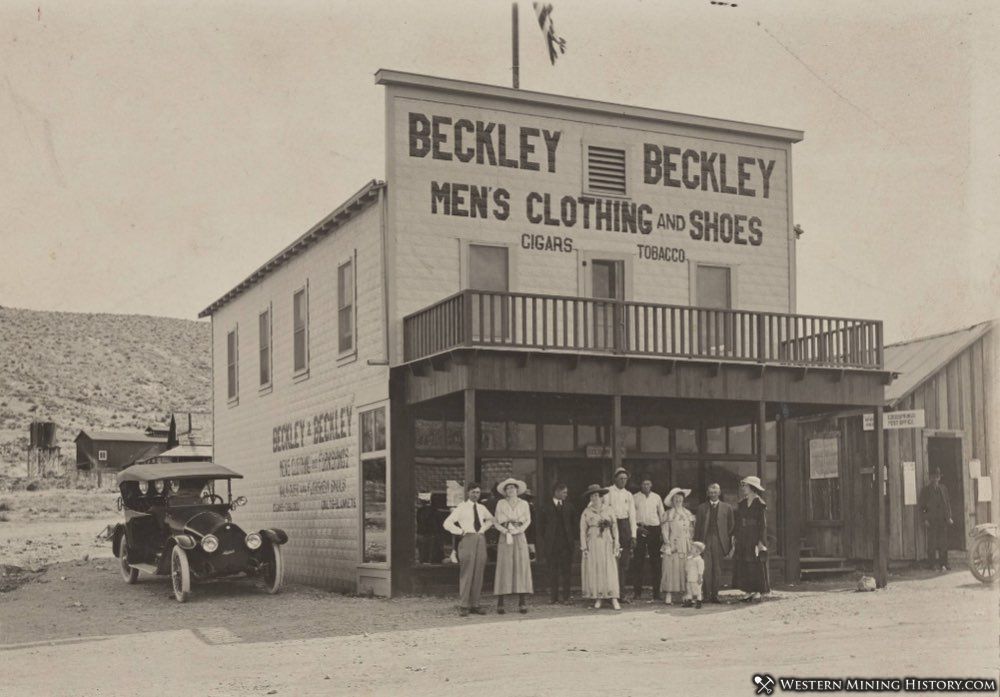 Beckleys in front of their store - Goodsprings, Nevada 1918

The town of Goodsprings prospered during this time with over 800 residents, several stores, a post office, saloons, hotel, school, hospital, and a weekly newspaper.

After World War I the mines of the district were largely dormant. The mid-1920s saw a minor revival and during the 1930s gold became the primary mineral produced. Around 150 people lived in Goodsprings during World War II. The varied nature of the ore kept the mines in production for many years, but by the 1970s the mines were permanently shut down. 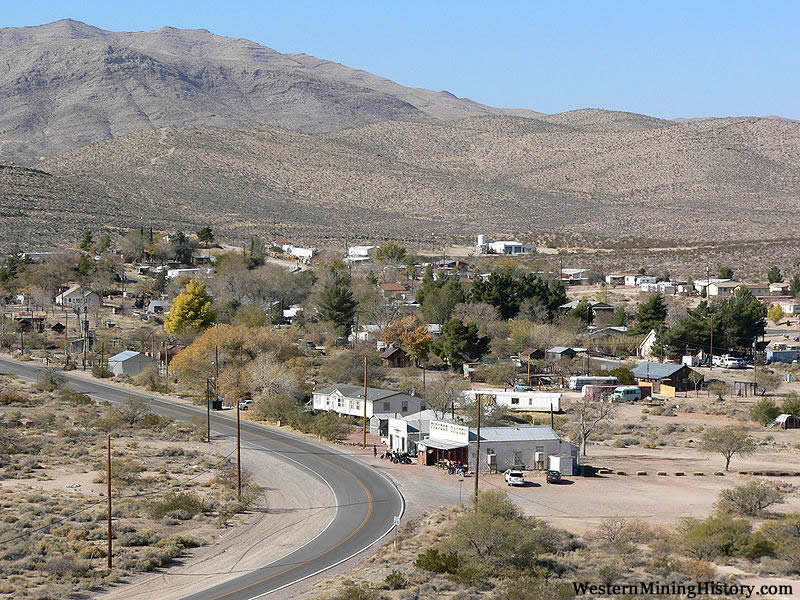 The Goodsprings district is Clark County's largest mineral producer with over $31 million in recorded production, over 40% of the counties entire output.