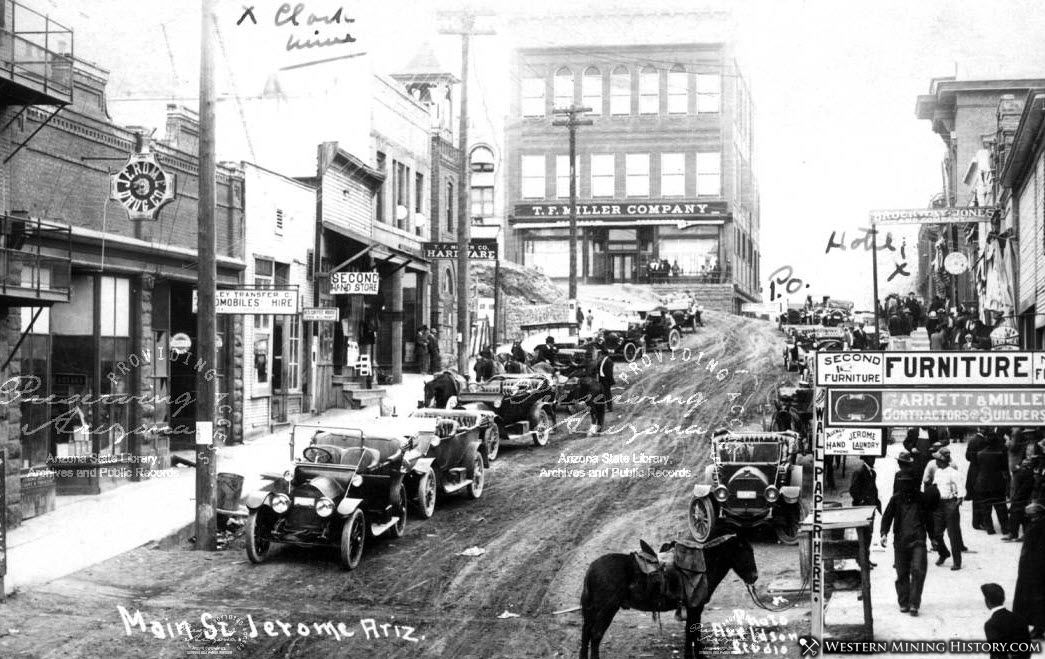 Cleopatra Hill is in central Arizona, 20 miles northeast of Prescott, the capital of the new Arizona Territory in 1863. Camp Verde, a U.S. Army post after 1865, was about 15 miles southeast of Cleopatra Hill. The Army built a wagon road connecting Camp Verde with Prescott to the west.

To accommodate settlers in the territory, the U.S. government relocated local Native American tribes to Indian reservations. The Camp Verde Reservation stretched for miles along both sides of the Rio Verde River northwest of Camp Verde. Parts of the Black Hills – including Cleopatra Hill – were within the reservation. 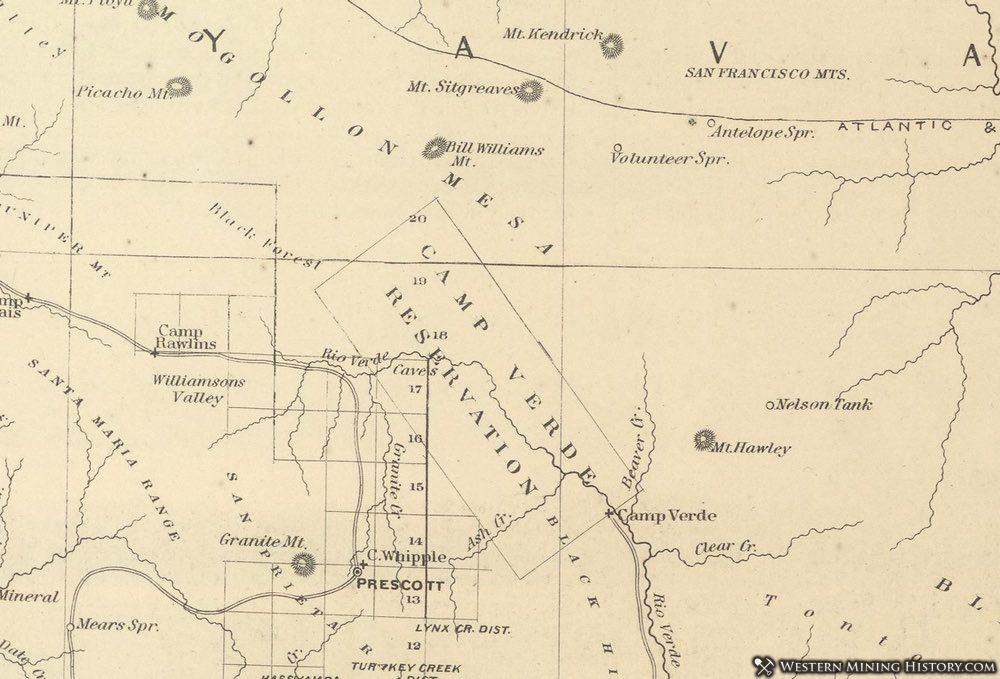 1878 Map of the Jerome Vicinity in the Arizona Territory

The Yavapai and Apache tribes were forced by the federal government to leave the 800-square mile reservation in 1875 and trek 180 miles to the San Carlos Reservation near Globe, Arizona. This opened up the Camp Verde Reservation to mining and settlement in 1877.

The steep slopes of Cleopatra Hill seem like an odd place for a town, but that didn’t stop the intrepid miners who flocked to the area. The first mining claims were staked in 1876 and it was discovered that Cleopatra was rich in high-grade copper ore. The mining camp of Jerome precariously hugged the northeast slope of the mountain.

The town was named after Eugene Jerome, a wealthy financier and officer of the United Verde Copper Company. Eugene was a cousin of Jennie Jerome, the mother of Winston Churchill. Mr. Jerome never did see his namesake town.

A metal water tank that had been hauled from Prescott by mule train in 1879 became the center of the young camp. The camp’s very first wooden building was a two-story saloon and bordello built next to the water tank by a madam named Nora “Butter” Brown.

The United Verde Copper Company began operating on Cleopatra Hill in 1883. United Verde built a smelter fueled by coke at Jerome that proved to be wildly successful, with profits of $1,500 to $2,000 per day. 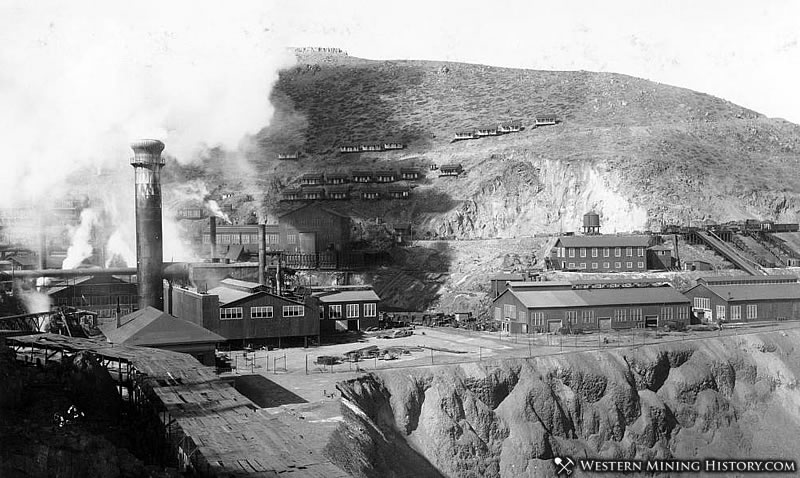 United Verde Mine at Jerome

By the end of December, the works at Jerome had been operating for four months full-time. In this time United Verde processed around 5,000 tons of ore, yielding 200 tons of copper bullion, along with lesser amounts of gold and silver.

The Arizona Territory’s governor, F. A. Tritle, was a major investor in the company. Over the next 70 years, the mines produced a billion dollars in copper, silver, and gold.

A wagon road was built from Flagstaff to Jerome and the tent city grew into a mining town of wooden buildings. Jerome had a post office operating inside a local store by 1885 and four saloons by 1887. United Verde employed over 300 men by 1890 as miners, smelter workers, and teamsters. The company and the town installed electrical lighting in 1890. 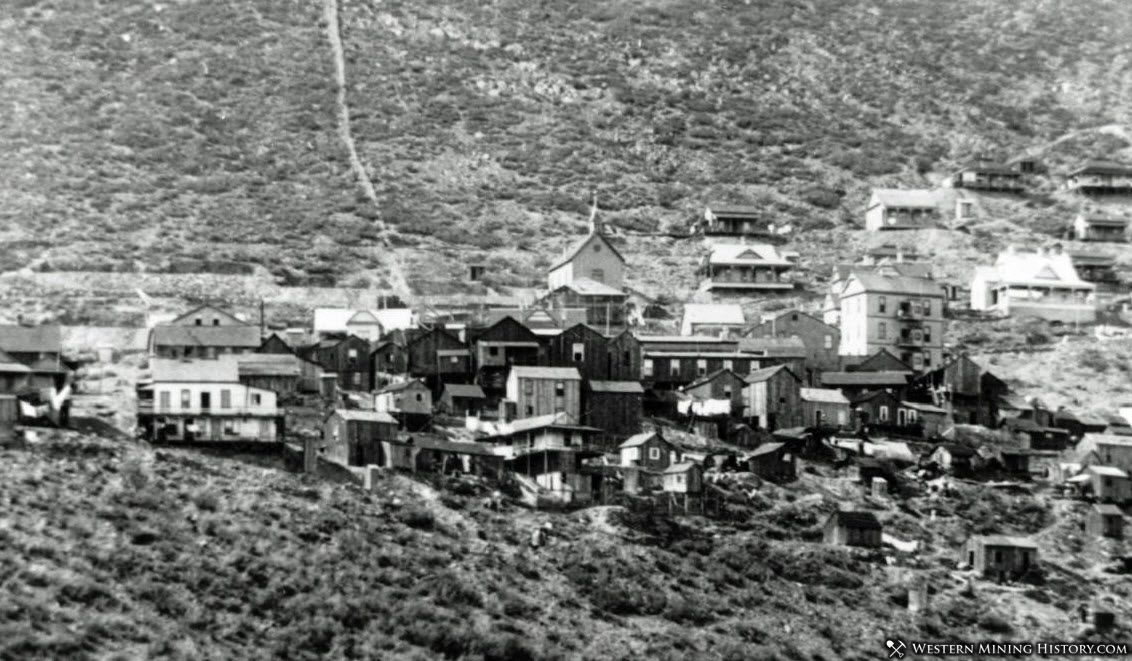 The Wickedest Town in America

Jerome was called the “wickedest town in America” by the San Francisco Examiner newspaper in 1899. A Phoenix newspaper described the town in September 1899 as having “one beggarly looking church and at least sixteen saloons and more going up.”

Maybe the townsfolk had been having a run of bad luck and just needed to live it up while they could. Multiple catastrophic fires destroyed Jerome but the richness of the mines assured that it would be rebuilt each time.

The April 1894 fire began in the early morning hours. The townspeople were woken up by the sound of gunshots fired by a bartender in a burning saloon. G. W. Hull’s store was one of the twelve buildings burned down. Heavy winds made fighting the flames futile. A second fire that year burned what was left of the downtown in June. 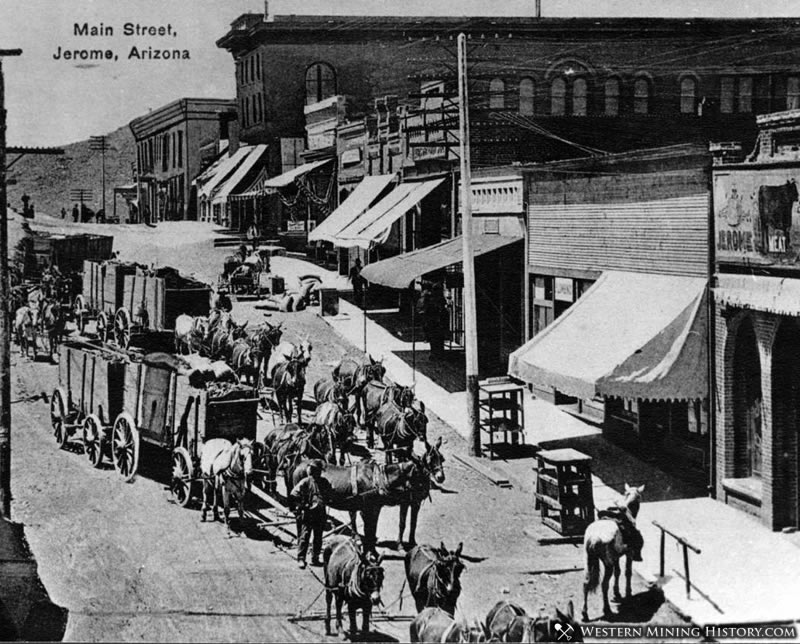 A blaze on Christmas Eve 1897 burned down a block in the notorious “tenderloin district” including a bordello, four saloons, and a boarding house/ restaurant. A devastating fire hit in September 1898 and, in the words of Phoenix newspaper, its "fiery breath” blew “Jerome off the face of the earth.” At least eight people died in the blaze.

The fire of May 1899 started in the Leland Hotel and spread quickly through downtown and a new hospital. Saloons, restaurants, stores, a bowling alley, a blacksmith shop, and a barber shop were destroyed or damaged along with dozens of small wooden dwellings.

When the town of Jerome incorporated in 1899 it was the fourth largest in Arizona. New building codes and a fire department helped keep the town intact. 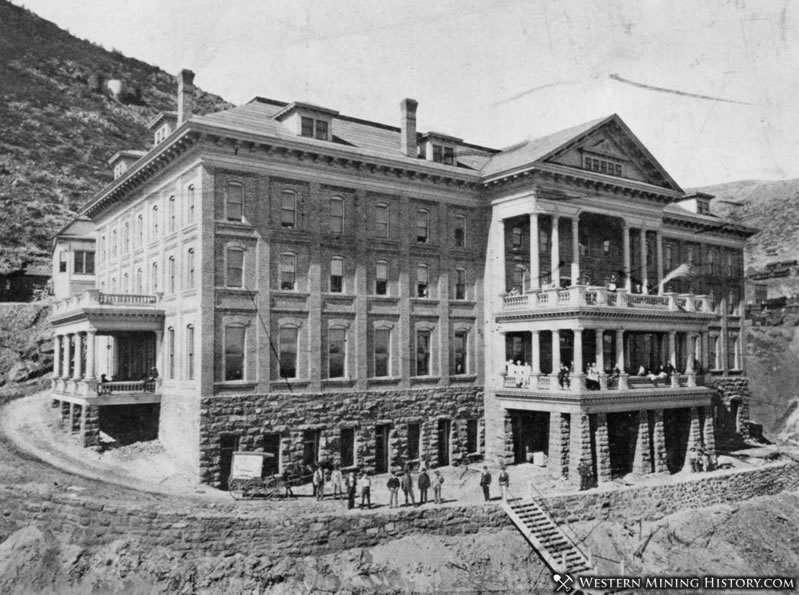 View of Montana Hotel in 1900, constructed for United Verde employees; the 100-room hotel was gutted by fire in 1915

Several new mining companies bought claims in the district during the 1890s, including The United Verde Extension Gold, Silver, and Copper Company.

Jerome first received rail service in 1895. The United Verde & Pacific was dubbed “the crookedest line in the world” from all the twists and turns that were required to navigate the steep terrain.

During World War I, demand for copper raised its prices and Jerome’s mines were busy. Miners from all over the world came to Jerome, from countries like Ireland, Italy, Poland, Germany, and Croatia. The patchwork of mining claims in the Jerome Mining District can be seen in a map from 1918.

In July of 1917, armed vigilantes rounded up around 75 members of the Industrial Workers of the World labor union and forced them onto cattle cars. The IWW men were then shipped to Needles, California and told never to return to Jerome. Authorities in California sent dozens of armed guards to intercept the train, stating that "Arizona can't dump her undesirables on California." The train turned around and transported the deportees to Kingman, Arizona.

This event would turn out to be a trial run for a much larger deportation at Bisbee in the coming days. 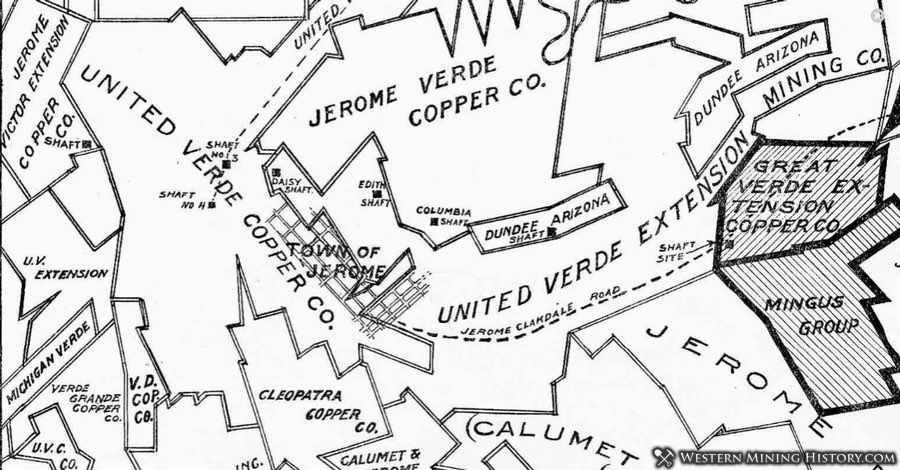 Claim map of the Jerome district in 1918

Underground fires burned in some of the miles of mine tunnels under and near the town for years. In 1905, as water from recent flooding seeped into parts of the United Verde mine that were burning, an explosion occurred. A dozen miners waiting to be raised 300 feet to the surface during a shift change were killed or severely injured by the hot steam and gases.

The fires eventually got too widespread to be avoided and underground mining was phased out in 1918 in favor of pit mining.

Jerome's population reached 15,000 in the 1920s. United Verde built a new hospital in town in 1926, a five-story poured concrete structure. It was the last major building built in the town. 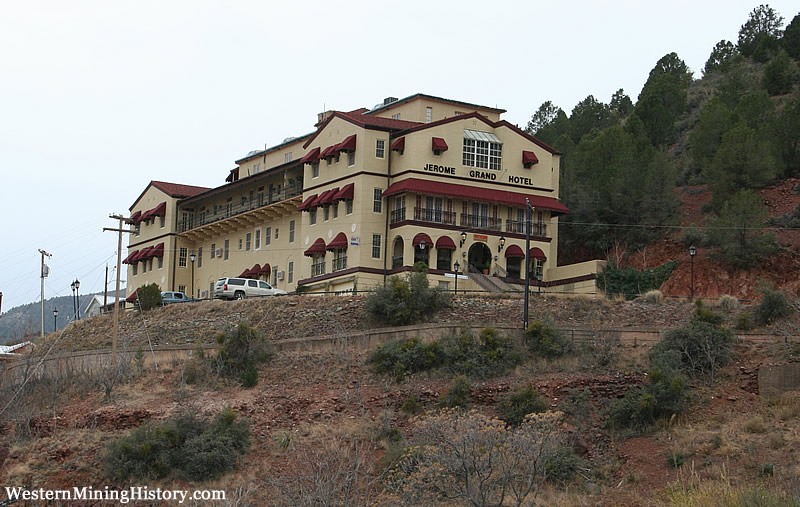 2008 View of the Jerome Grand Hotel, built in 1926 as United Verde Hospital

Jerome's precarious position on the steep mountain slope would cause many problems throughout its history. Landslides and cracked building foundations were common occurrences. The jail building was jostled off its foundations by a powerful blast in 1938 and slid downhill. The jail still stands where it ended up, across the road and 225 feet from where it was built.

The End of Copper Mining in Jerome

The end of the copper mining era in Jerome came in 1953 when Phelps Dodge closed the mines. About 800 million dollars in copper had been removed from the local mines by then.

Jerome nearly became a ghost town as most folks got “out of Dodge,” leaving only 50 residents. The Phelps Dodge and United Verde Exploration companies owned most of the land under the town, many lots and buildings in town, and the schools and hospital. They began bulldozing buildings in the town, beginning with the four-story T.F. Miller building that had stood since 1899. Local kids were paid a penny per brick to whack the mortar off the bricks for re-use.

An enterprising group of locals that stuck around formed the Jerome Historical Society and halted demolition of the town’s buildings in 1956. They successfully marketed the town for tourists as the “World’s Largest Ghost City.” The society opened the Mine Museum and Gift Shop on Main Street in the 1950s, and it is still open. The museum has displays of mining equipment, a pistol used by a Marshall to gun down some vigilantes, and saloon paraphernalia. 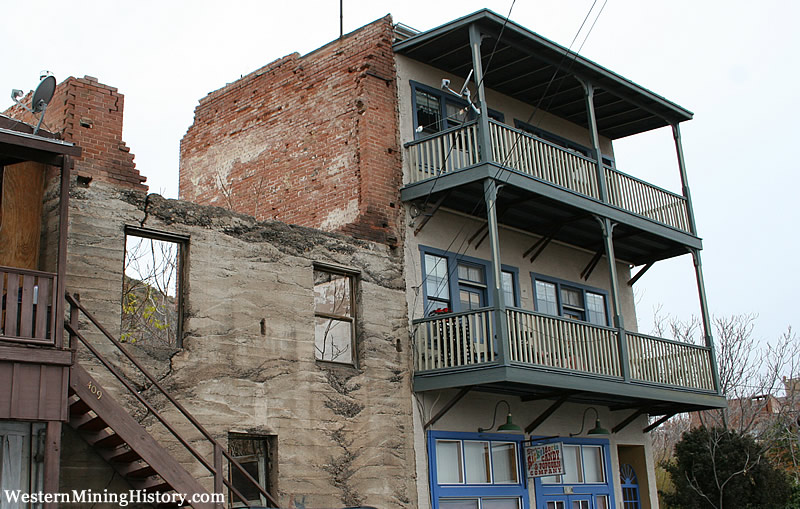 A new generation of free spirits and artistic folks began re-populating the town in the 1960s. Another generation or two stuck around, leading to a town that is part hippie shops and part post-apocalyptic building ruins. In 1965 the Douglas Mansion – built in 1916 by James S. Douglas on a hill above his Little Daisy Mine - became a state park. Jerome was designated a National Historic Landmark in 1967

Jerome continues to be a popular tourist destination to this day. The town is situated in the most unlikely spot for a major mining city and is a sight to behold. 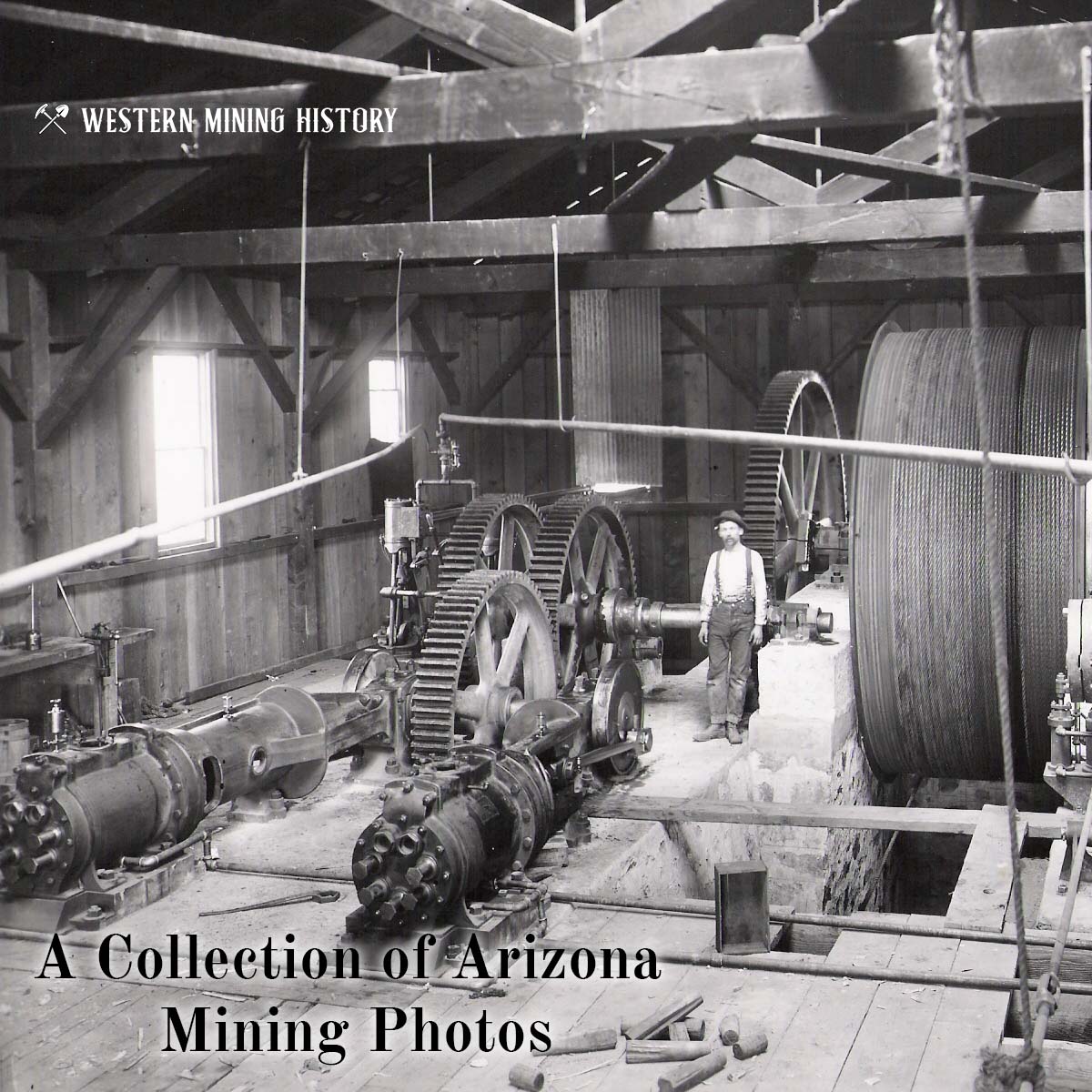