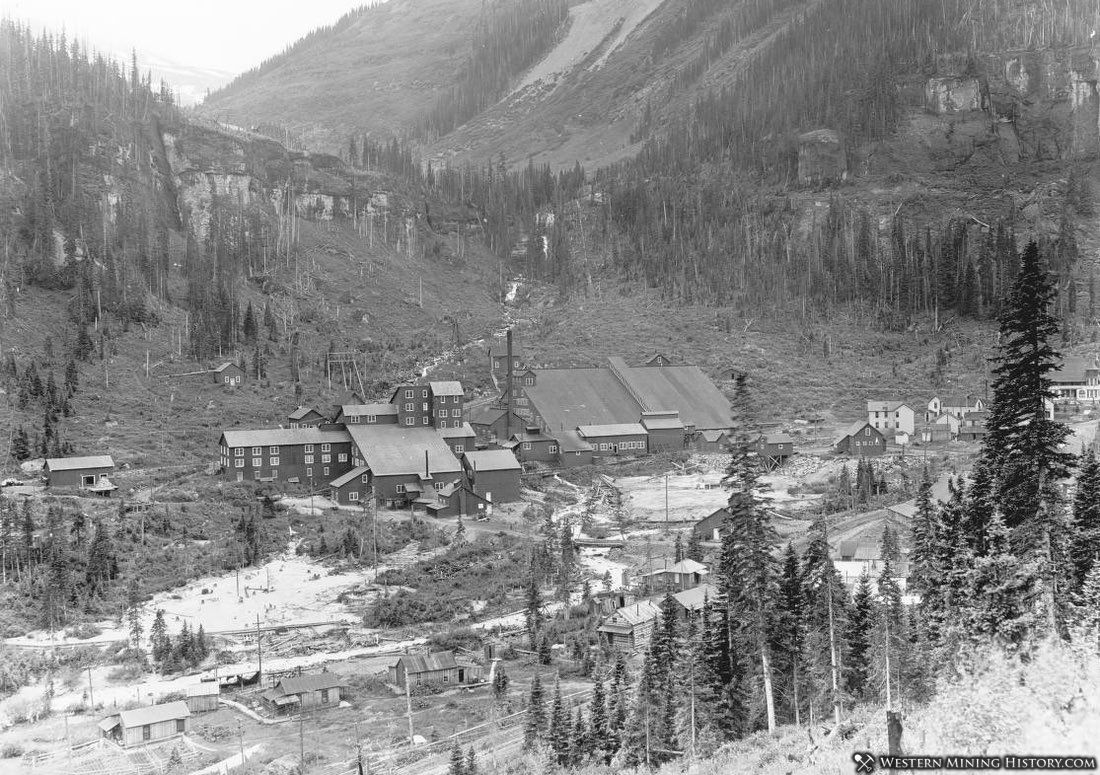 The Camp Bird mine was discovered in 1896 by Thomas Walsh, who would go on to be one of Colorado’s most successful mining men. Walsh was prospecting the Imogene Basin above Ouray, Colorado during a time when most miners had given up on the area. The basin was historically a silver mining area, and the silver panic of 1893 had put the area into an economic depression.

Walsh thought there might be undiscovered gold in the Imogene Basin, and he began buying up old claims. His hunch was correct, and he discovered rich gold ore on one of the claims. Walsh operated in secrecy through the rest of 1896, keeping his discovery private while buying up many more claims in the basin.

Walsh’s mine would take the name Camp Bird in acknowledgement of the ravens that so frequently stole food from miner’s camps. Development of the mine proceeded rapidly. In 1898 an aerial tramway was built to transport ore from the mine to the mill a couple miles down the mountain. In 1899 the first boarding house was built for miners. By the end of that year over 200 men were employed by the mine. 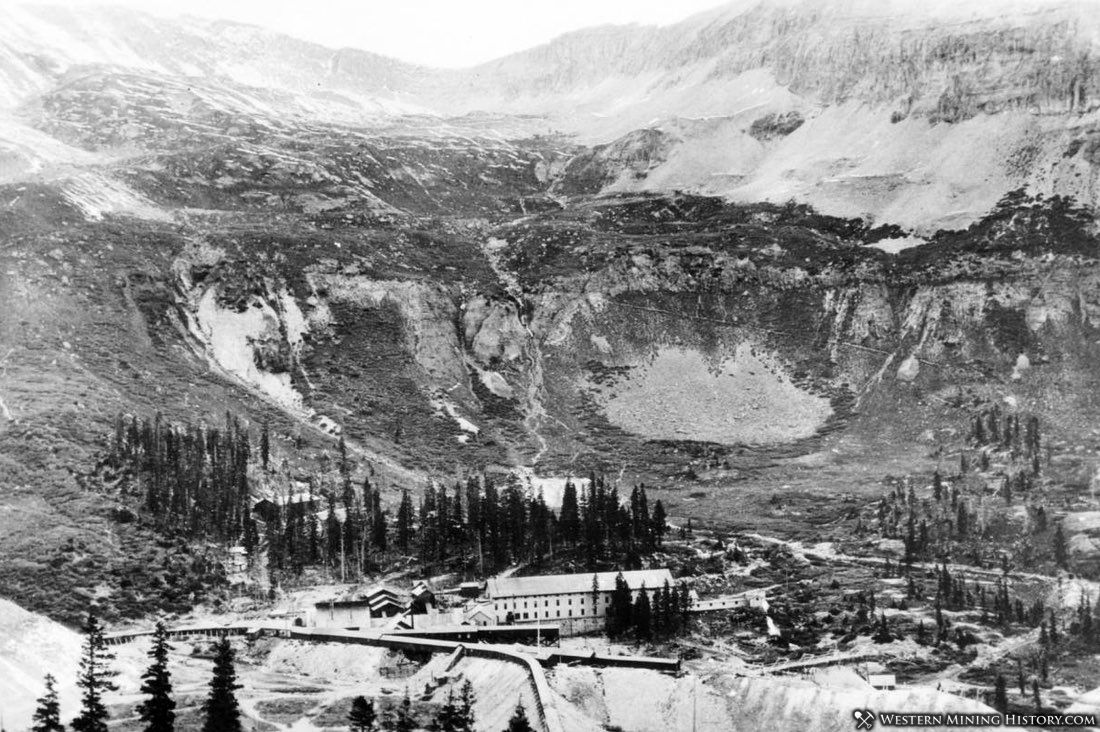 No. 3 tunnel and boarding house at the Camp Bird mine 1910

The Camp Bird boarding house was a three-story structure built to accommodate 400 men. No expense was spared in the construction of the boarding house, which was described in an 1899 newspaper article:

A boarding house capable of accommodating 400 men has been built and equipped with modern conveniences as well as the average hotel - electric light, steam heat, hot and cold water, porcelain bath tubs, commodes, sewer connection, fire apparatus, library, reading room, stationary porcelain basins, and all the other etceteras that contribute to the comforts of a home.

The lavish boarding house was just one part of Walsh’s desire to treat miners fairly. The Camp Bird was one of the first mines in the West to implement eight-hour work days. Wages at the mine were high, the equipment was modern, and safety and working conditions were regarded as exceedingly good.

Walsh’s investment in the health and happiness of his miners paid off as the Camp Bird mine did not experience the violent labor unrest that rocked the region in the first few years of the 1900s.

In 1899 the Silverite-Plaindealer called Camp Bird “The Greatest Gold Mine in Colorado or the Whole Earth”. By the end of 1900 the mine consisted of 103 mining claims on 941 acres, and had twelve mills in operation. 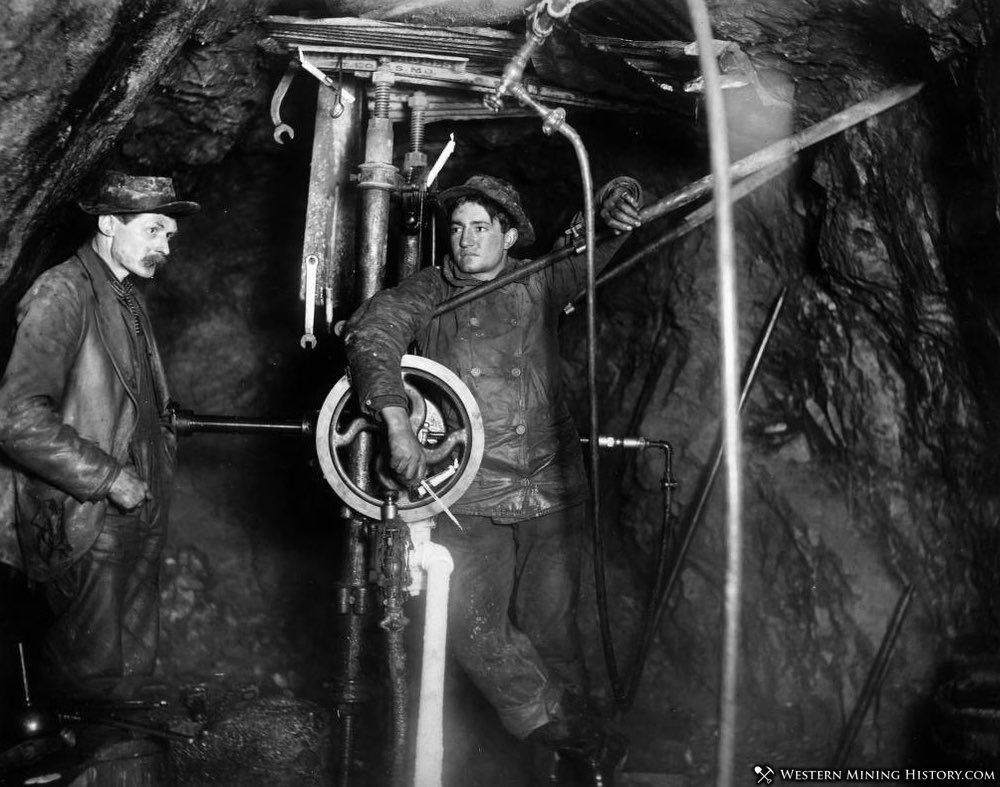 Miners with a pneumatic drill at the Camp Bird mine ca. 1900

The mine would go on to be one of Colorado’s richest and longest running mines. Walsh sold the mine in 1902. Between the millions he made while owning the mine, and the estimated three to six million he received upon selling the mine, Walsh retired from mining life a very rich man.

Camp Bird had a post office from 1898 to 1918. The mine operated intermittently for many decades and even today there is interest in reopening the mighty Camp Bird. Today most of the mine sites have been remediated and the equipment removed. The lower mill site still has some remaining houses, including the superintendent's office and company housing. 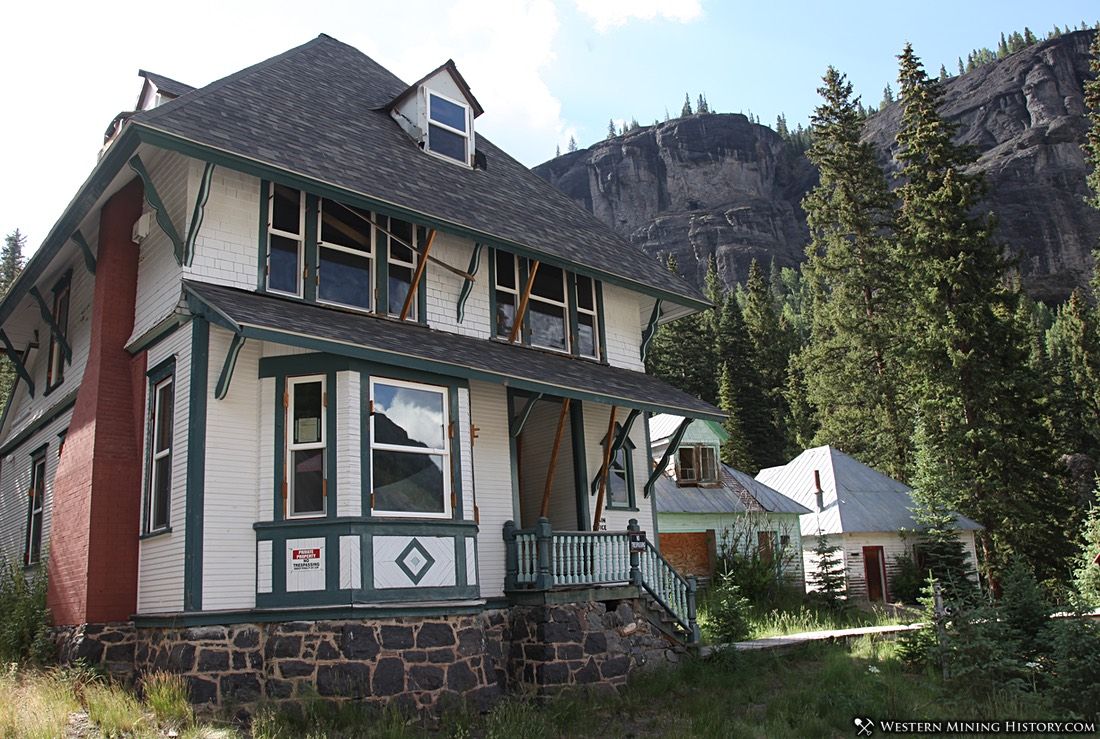 A few historic homes remain at the Camp Bird mine

This afternoon at 2:30 o`clock the Mount Sneflles stage was held up about a mile this side of the camp Bird mill and an unsuccessful effort made to rob the treasure box containing about $12,000 worth of gold bullion, the property of the Camp Bird mine.

The stage was leisurely rolling along down the mountain side with the guard, Pat Hennessy, trailing along on horseback about fifty feet In the rear. The stage was driven by Al Bucklln, and James Knowles, an employee of the Camp Bird mine, was the only passenger. When about eight miles from this Ouray a masked man emerged from a thick cluster of sage brush, and with a drawn Winchester ordered the driver and Knowles to throw up their hands.

Almost at the same instant another armed and masked man came from the bushes in the rear of Guard Hennessy and ordered him to throw up his hands. Hennessy reluctantly put up one hand and then came the order: "Throw up both hands or I will shoot you." Hennessey shot both hands up in the air and was then ordered to dismount With a Winchester drawn on him he was marched past the stage to where the other hold-up had the driver and the passenger.

All three men were then compelled to lie flat down and while one of the highwaymen stood guard over the men the other went to the stage and commenced to throw out the mail pouches and baggage. His companion watched the search with eager interest, and when it seemed to be in vain, called to his partner that the gold was under the drivers box. He looked there, but for some reason was dissatisfied, as he made no effort to open or move the strong box, which was located under the seat and contained $12,000 of pure gold, taken from the Camp Bird mine.

Turning to the driver the searcher demanded that he reveal to him the hiding place of the Camp Bird gold sacks. The driver pleaded ignorance, and the hold-up apparently satisfied, reloaded the stage with the mail pouch and luggage and ordered the prisoners to get up and get in the stage, that they would take care of the horse. The men did as they were told and when all were aboard they were commanded to drive on.

The highwaymen stood at the scene of the hold-up until the stage was out of sight, when it is supposed they left in the direction of the Revenue mill, west of the Camp Bird properties. The stage proceeded on to the city at a rapid rate and reported the incident.

All of the mines and mills in that section were at once notified by telephone, and the mill men and miners armed themselves and commenced scouring the country for the bandits. Sheriff Edgar and City Marshal Van Houton also organized posses and started in pursuit.

At this hour, 8 p.m., no tidings have been received from the pursuers, and it is probable that no clue to the bandits has been discovered. A man just from the vicinity of the attempted robbery reports that he was held up a mile this side of the Revenue workings by two masked men and his horse taken from him. He states that the men were considerably excited, and when they took his horse, rode off at a lively rate. They had one horse, which is supposed to be the property of the guard.

9:30 p.m. — Under Sheriff McQuilkin, one of the sherriff's posse, has Just returned from the chase. He says that his party came in sight of the bandits near Yankee Boy basin. The men were then on foot. The highwaymen when they saw the posse, immediately retreated behind a ledge of rocks and opened fire. The officers were unable to get them within range, and were compelled to retreat and give up the chase. About twenty shots were fired without effect. It is thought the bandits will be captured by a posse on the other side of the range.

For over a year the Camp Bird people have sent their retort to the city in the stage under guard, bringing down from $6,000 to $8,000 daily. This afternoon they were sending down two days output, which was easily worth $12,000, and this is the first time an attempt has been made to rob them.

The hold-ups are described as medium-sized, well dressed men, and apparently not familiar with the manner in which the retort is shipped. Manager Benson of the Camp Bird says that the hold-ups will be run down and captured if money can accomplish it.

An October 14, 1899 article reveals that one of the bandits, John "Kid" Adams, was tracked to the bandit's stronghold near Norwood and killed by Deputy Sheriff George Kinchen. The fate of the other bandit is not known. 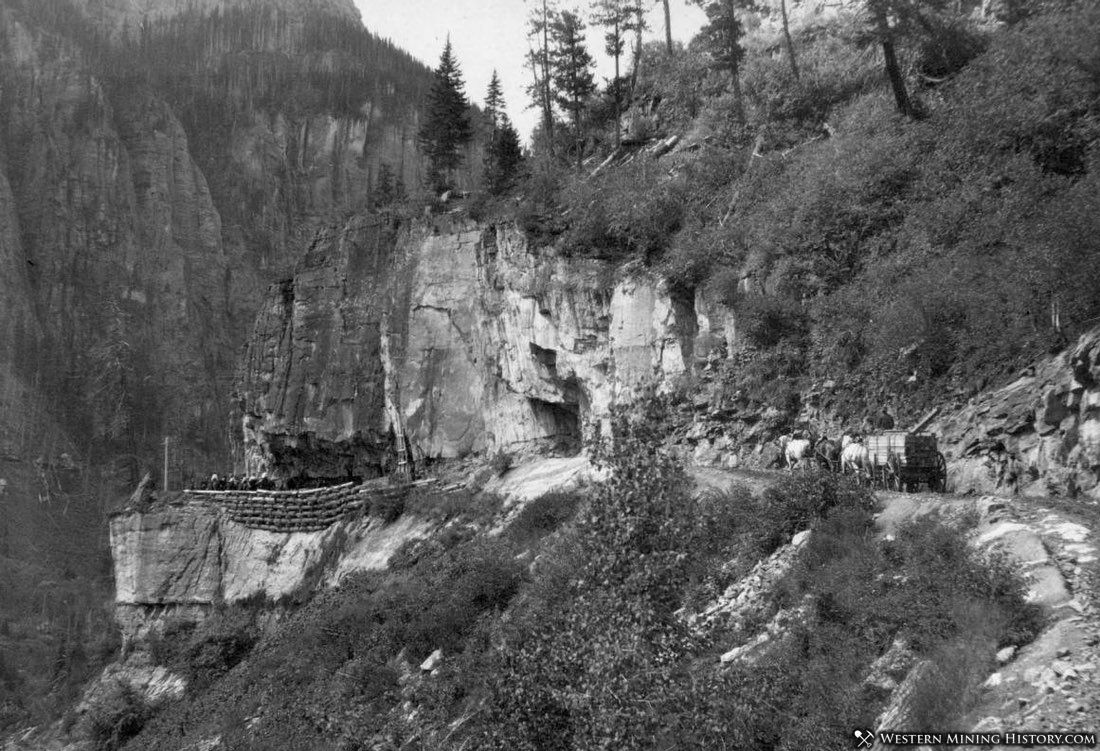 The road from Ouray to Camp Bird around 1900

A Washington dispatch says that Thomas F. Walsh has made a statement concerning the recent negotiations involving the ownership of the Camp Bird mine and the formation of a company known as the "Camp Bird Limited.”

“I gave up a controlling interest in the Camp Bird property for a consideration of $6,000,000. The property turned over to the Camp Bird Limited, in which I will hold considerable stock, includes the Camp Bird mine and a greater part of the 132 claims surrounding it, together with all mill sites, machinery and equipment."

"In addition to this the company has taken a bond and lease for $5,000,000 on certain of the remaining properties, not included in the sale. I have retained a few of the claims, which I propose to develop myself. Of the $6,000,000 to be paid by the English capitalists for the controlling interest of the Camp Bird properties, I have received $3,200,000 in cash. The rest of the money Is to be paid in stipulated installments from revenues produced by the mine. The deal was effected by John Hays Hammond. in conjunction with the Venture Corporation.”

Mr. Walsh has nothing to give out concerning the plans for the future, except that lie was to remain a member of the new company and would devote his personal interest to the development of the claims he had reserved from the sale.

1899 Sneffels Stage Robbery and the Death of Kid Adams (1899 Newspaper)
On October 2nd, the Sneffels Stage was robbed as it transported mail and gold bullion from Camp Bird to Ouray, Colorado. The bandits were pursued relentlessly, but one managed to escape after many days dodging the law. The other, a young man known as "Kid Adams" was not so lucky, and was killed by a deputy. This was not the end of the story though, as it was determined that the deputy murdered Adams rather than bring him in to face charges.