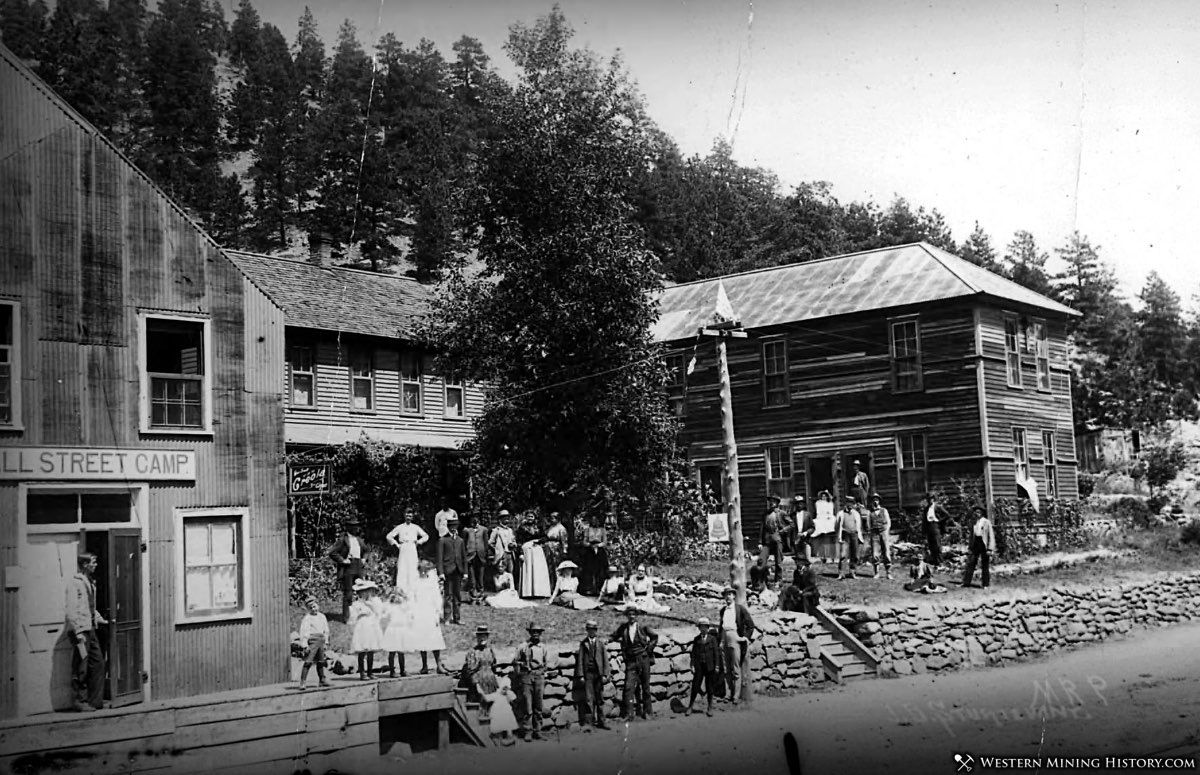 Wall Street was established in 1898 when New York capitalist Charles W. Caryl showed up and bought dozens of mines and claims at what had been a camp known as Delphi. Delphi had a post office from 1895 to 1898.

The new town of Wall Street was named for the New York capital that would transform the town and nearby mines as part of Caryl's plans. He formed several new mining companies and the Wall Street Townsite Company at the existing Delphi camp.

Caryl's townsite company expanded on existing buildings and built new ones including the Wall Street Assay office that is still preserved today as a museum.

Caryl was apparently a bit of a swindler, making big promises to New York investors that he was unable to deliver on at his mines. In 1900 plans for a large stamp mill were announced, but he was never able to get the project off the ground. By 1902 Carey had lost or sold most of his assets at Wall Street.

Boston capitalists operating as the Wall Street Gold Extraction Company, purchased many of Caryl's assets and built the mill that Caryl had initially planned. This impressive mill cost over $150,000 dollars and took 22 months to build, and was one of Colorado's first chlorination mills. Despite promises that the mill would drastically reduce the cost of treating ore, it was a failure and was scrapped in 1907.

The mines of the Wall Street area continued to produce and the town survived the loss of its mill, although it was greatly diminished.

The massive stone foundation of the Wall Street Gold Extraction Company mill still stands at the town site today, a testament to both the amazing craftsmen of the day, and the often reckless ambitions of the periods mining capitalists.

Caryl's assay office, and impressive building built of native stone, still stands and is preserved as a museum. 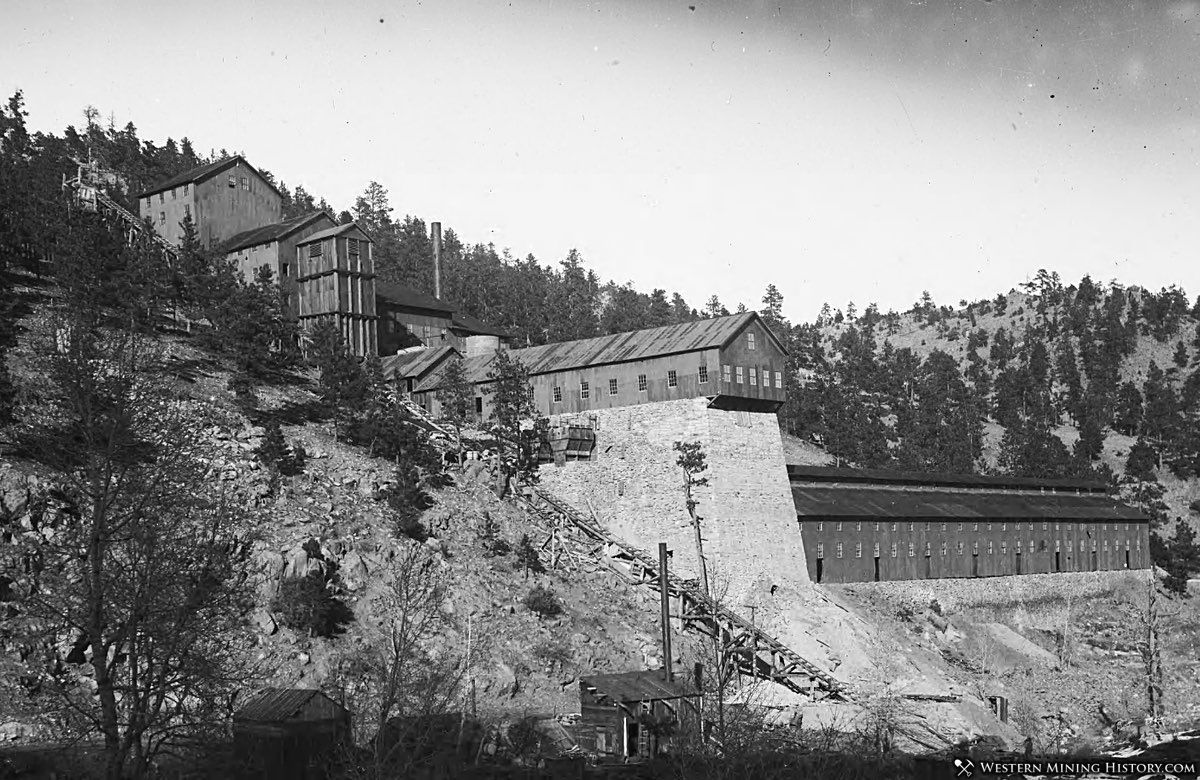 A February 11, 1903 edition of the Weekly Courier details operations at Wall Street's chlorination mill. The rest of the text on this page is quoted from this article.

A representative of the Courier visited the gold extraction mill just completed and situated in the Sugar Loaf gold mining district, nine miles above Boulder. The successful operation of this new process bids fair to revolutionize the gold mining interests of the state. The present cost of treating ore ranges from $10 to $15 per ton. The cost under this chlorination process will be $5 a ton. This makes possible the running of lower grade ore than has ever attempted before.

An investment of $150,000 in the plant speaks for the faith of the Boston capitalists, both in the process and in the ore values of the Sugar Loaf deposits.

There appear to be four steps in the process of treating the ore.

First, the customary crushing, drying and rolling of the ore until it will pass through a No. 16 mesh.

Second, the roasting of the crushed ore. The ore is conveyed over furnaces heated to an intense degree of white heat, and held at this temperature for eight hours, the heat being maintained by an ingenious injection of gas. From this the ore is dumped into a pit 50 feet deep — a cooling pit. The purpose of the roasting is to drive off the sulphur and iron impurities which are so serious an obstacle to the extraction of the valuable metals.

The third step is the unique feature of this process. From the cooling pit the ore is automatically hoisted into the leaching vat, an open vat 35 feet in diameter and 6 feet deep, with a capacity of 125 tons of roasted ore. There are eight of these vats. The ore is under treatment in this vat from six to eight days, and the secret of the whole thing is a sack of common salt. A handful of salt takes the gold out of the ore. Wonderful!

But how to use the salt — aye, there's the rub.

In a building higher on the hill is a series of wooden tanks divided into many compartments. Each alternate compartment contains a carbon and a copper plate, the carbon giving the positive and the copper the negative pole for the current. An electric current of 300 amperes is supplied to these plates. From a tank with a capacity of 60,000 gallons of water the salt in strong solution is fed to these tanks. The electric current separates between the sodium and chlorine, the sodium betaking itself to the copper plate chamber and the free chlorine saturates the solution through the carbon plate chamber.

This powerful chlorine solvent is then fed through wooden pipes — no metal being able to resist its action — to the roasted ore in the leaching vat. From six to eight days it percolates through the ore until every metallic particle is leached out into the solution.

The fourth step is the drawing off of this solution and passing it through another series of wooden tanks supplied with a great number of lead plates fed by a strong electric current. The free gold is precipitated as a brown powder upon these lead plates from which it is scraped and retorted into bullion.

One amazing feature of this plant and process is that from the crusher to the lead plate, which receives the percipitate, the entire work is almost automatic. Handling 125 tons of ore per day and needing a human hand only here and there to set a gague, to throw a lever, to turn a faucet—wonderful is this process of liberating the precious metal.

More wonderful is the quiet, modest, modest, active young man who, in 1890, finished his course at old Columbia and then specialized in electrical studies and has finally perfected, patented and erected his first chlorination plant. The genius, grit and modest manliness of John E. Greenawalt will be told by many a Colorado miner.

Previous to going through the mill an inspection was made by the stockholders of the Rocky Mountain Gold Mining and Milling company's property, known as the I.X.L. Lode, Nos. 1,2,3 and 4 located within about a quarter of a mile of this mill. The officers of the company are Harry B. Henderson of Cheyenne, state examiner of Wyoming, president; Myron H. Akin, vice-president; Clark Smith, treasurer; B.P. Melick of Boulder, secretary, and Norman Mills of Wall Street, Colo., as superintendent. Other prominent stockholders are W.R. Adams, county clerkof Weld county, John S. Mills of Wall Street, Dr. J.W. Skinner, W.H. Schuretnan and Carl Anderson of this city.

Over $12,000 have been expended on this property in digging two tunnels , 300 and 700 feet long , ore having been taken out within the past three months that assayed from $36 to $127 per ton. Expert mining men and geologists have passed upon this. property as having most excellent prospects because of the flattering assays made and its proximity to an up-to-date mill. It is certainly owned and managed by conservative and honorable business men.