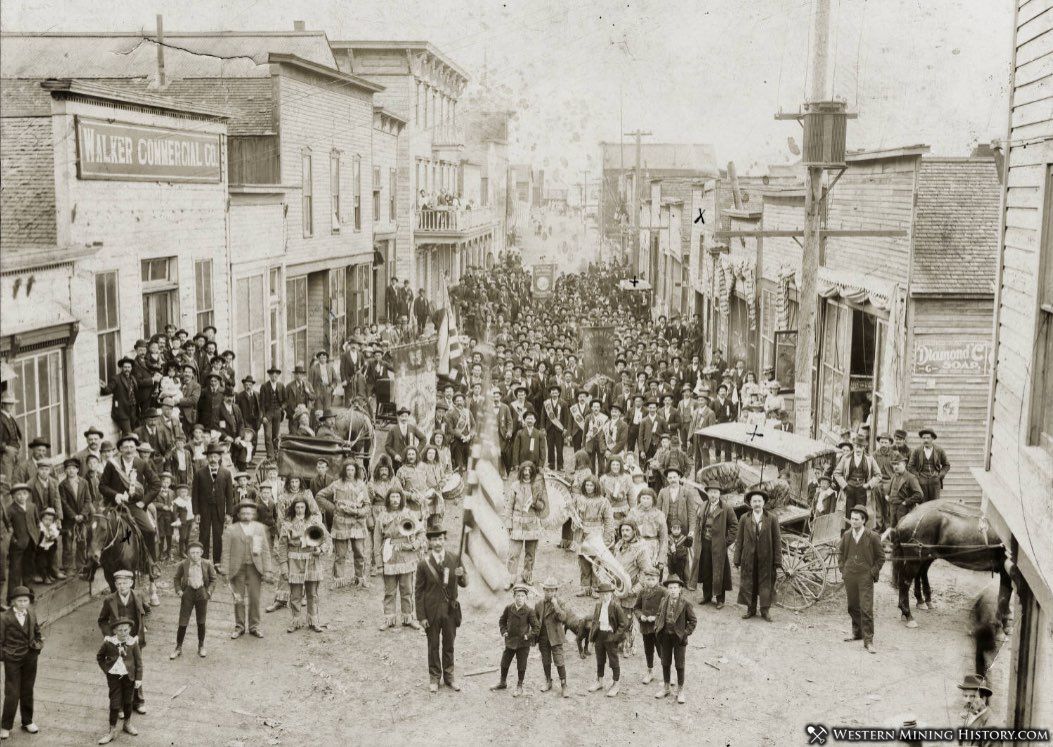 Hector Horton first discovered silver in the general area in 1865. In the autumn of 1872 the Granite mine was discovered by a prospector named Holland. The mine was relocated in 1875. 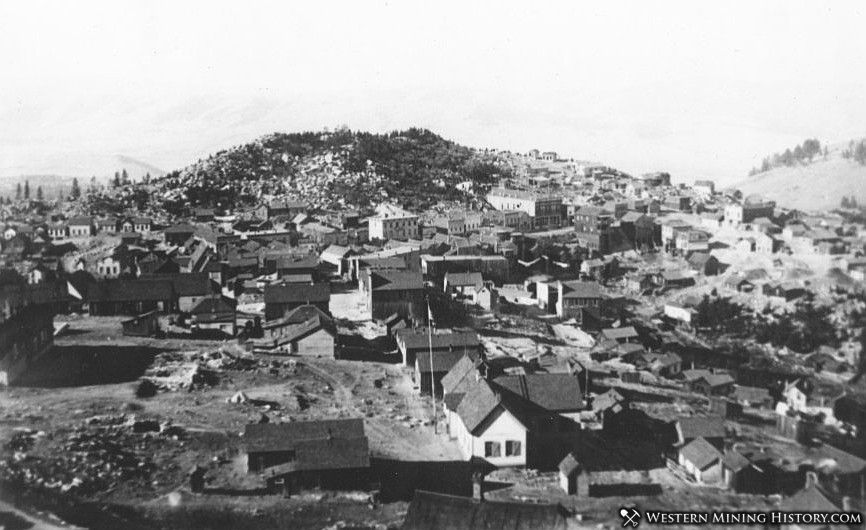 This was the richest silver mine on the earth, and it might never have been discovered if a telegram from the east hadn't been delayed. The mine's backers thought the venture was hopeless and ordered an end to its operation, but since that message was delayed the miners continued working, and the last blast on the last shift uncovered a bonanza which yielded $40,000,000.

In the silver panic of 1893, word came to shut the mine down. The mine was deserted for three years, never again would it reach the population it once had of 3,000 miners.

Today there is no one living in the camp. The state park preserves the Granite Mine Superintendent's house and ruins of the old miners' Union Hall which have been included in the Historic American Buildings Survey.

A Longer History of Granite

The Granite Mountain lode was located on July 6, 1875 after Eli D. Holland took a sample of an outcrop to Philipsburg to be assayed. Although some work was done on the property, the real development of the mine had to wait until 1880 when Charles D. McLure, the superintendent of the Hope mill found a specimen of ruby silver on the dump. The specimen was assayed at 2,000 ounces of silver per ton.

McLure negotiated a $40,000 bond with the owners under his own name. With Charles Clark, he formed a mining syndicate. Clark traveled to St. Louis and capitalized the Granite Mountain Mining Company to the tune of $10,000,000. For the next two years $130,000 was spent developing the mine. Stories are told that a telegram from the investors told McLure to shut down operations, and at the same time a cable from McLure to the investors announced the discovery of a rich body of ore.

Whether the stories are true or not, in November of 1882 after 115 feet of barren ground, ore was encountered in the Bonanza Chute that assayed at 1,700 ounces of silver per ton. The next summer and autumn the Bonanza Chute sent fourteen hundred tons of ore to the Algonquin mill with a return of $274,000

In 1884 a town developed around the Granite mine as miners built cabins on lots rented to them by the company for $2.50 per month. Near the top of a ridge, the Granite camp was a company town, built by employees on steeply sloping ground.

As workers of different nationalities collected in camp, neighborhoods developed: Donegal Row for the Irish, Finnlander Lane, and Cornish Row. Moore House, a three-story hotel, was the pride of the camp and considered one of the best hotels in the Territory. Since no water was available locally, water had to be hauled from Fred Burr Lake until a pipe and flume could be constructed to carry water to a cistern. 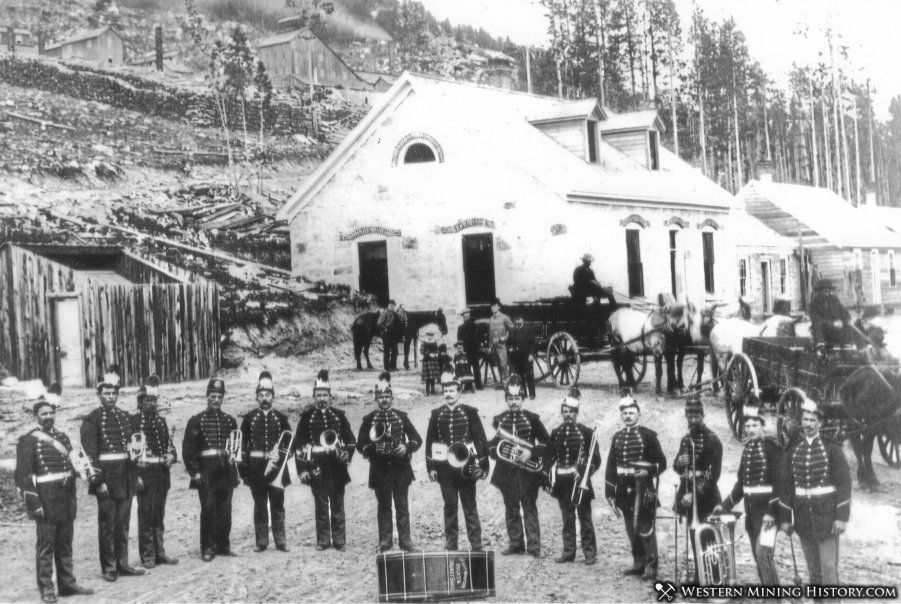 Granite Miners Coronet Band in front of the Superintendent’s house

By 1889 the town had four churches, a newspaper (Granite Mountain Star) and a public school for the enlightenment of the citizens. It also had 18 saloons, a hospital, fire station, bathhouse, a three-story Miners' Union Hall, Knights of Pythias Hall, Masonic Hall, and an Odd Fellows Hall. For fun a roller rink was used for parties and a four-mile bob sled run connected Granite to Philipsburg

McLure was succeeded by John W. Plummer and under his management the mine paid its first dividend of $60,000 in April 1885. A 20-stamp mill was in operation by December of 1885 and was later replaced by an 80-stamp mill. Between 1885 and 1888 the operation produced 2.5 million dollars.

In 1888 the mine's production exceeded the capacity of the mill and a new 100-stamp mill was built on Fred Burr Creek. The Rumsey mill, named after Lewis R. Rumsey, the president of Granite Mountain Mining Company between 1884 and 1889, became operational on March 15, 1889. The mine was connected to the mill by an 8,900 foot tramway and to Philipsburg by a 7.7 mile extension of the railroad. A 8,500 foot tunnel was begun at Rumsey and driven to the mine.

A camp of 500 mill workers, miners and their families developed around the mill. In 1890 the Granite Mountain operation produced $4 million in silver and gold. 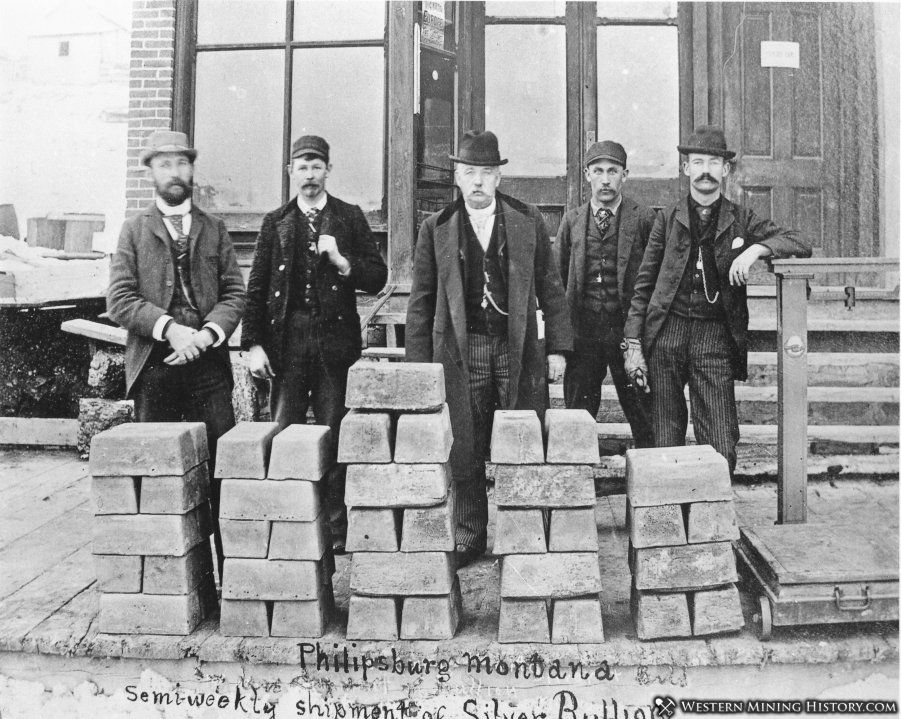 McLure then formed the Bimetallic Mining Company on equal shares with Charles Clark and J. M. Merrell. Although separate from the Granite Mountain, by 1886 when the company was incorporated, eighty percent of the ownership was the same as Granite Mountain

On Douglas Creek about one mile south of Philipsburg, the Bimetallic mill was built in 1888. The 50-stamp mill, 150 feet wide by 367 feet long, was rated at 75 tons with the capacity to add more stamps later. A separate two-story building housed the mine offices, fireproof vault, kitchen, library, parlor and living quarters. The mine and mill employed 500 workers.

Around this operation grew the small town of Kirkville, later known as Clark. The mill began reducing ore in January of 1889. It was connected to the Blaine shaft in Granite by a two mile long tramway. The large iron tram buckets could carry 500 pounds of ore down the mountain and fuel back up.

In 1891 the mill was enlarged by 50 stamps to give it a 200-ton capacity. Ore was dumped continuously in the furnace and mixed with rising combusting gases. In 1893 an accompanying slow-cooling chloridization process was nearly perfected and a 4,307 pound bar of silver bullion from the Bimetallic represented the town of Granite at the 1893 World's Fair. Despite the repeal of the Sherman Silver Purchase Act in 1893, mining continued through the summer of 1893

However, the rapidly dropping silver prices spelled the doom of silver camps throughout the west. A day came in August when the engineer at the Granite mill tied down the steam whistle, announcing the end of an era of incredible silver production. The chloridization process was left unperfected. The Douglas Creek tunnel was stopped a few hundred feet from the shaft. The town of Granite became a ghost town overnight as the entire population, with possessions in tow, left the mountain.

For three years, Granite was a ghost town, as the mines slowly resumed production. In 1898 the Granite and Bimetallic properties were consolidated and work resumed. At the time production figures were published that showed the bullion from the Granite Mountain from 1883 to 1898 was worth $22,093,106.26 while that of the Bimetallic was worth $7,267,813,29 with a net profit to stockholders of $13,770,000!

From 1898 to 1901 the combined property was the largest silver mine in the world and produced a million dollars of bullion a year. In 1902 a 34,000 pound motor casting for the Bimetallic hoist motor was hauled up the mountain. An 8,850 foot tunnel completed from the portal on Douglas Creek tapped the Bimetallic at 1,000 feet and the Granite Mountain at 1,450 feet

A subsidiary company, Montana Water, Electric Power & Mining Company transformed Georgetown Flat into a reservoir for their power station for the mines. The Flint Creek dam was begun in 1890 to generate power for the nearby towns. It was completed with Granite / Bimetallic money in 1900 and used to power the mines until 1906.

Although the Granite mines shut down briefly in 1905 because of low silver prices, the mine was back in production the next year. By the end of 1913 the small district had produced $39,000,000, mostly from Granite, Hope and Trout mines. But the mines had been excavated below water level and were reduced to working lower grade ores.

After 1920 dividends were paid only at irregular intervals. In the period between 1907 and 1932 the district produced about $7,500,000 in ore. The Granite and Bimetallic reopened in 1934 and 35 men processed 30,000 tons of ore. In 1958 the Trout Mining Division of the American Machine & Metal Corporation were conducting exploration work in the shaft when a fire broke out in the engine room. Although an underground crew was rescued, most of the Granite mine surface structures were destroyed

Mentions of Granite from Historical Newspapers

From the Daily Alta California November 5, 1888
The Granite Mountain Mining Company of Montana paid a dividend of $200,000 on the 10th, making $1,400,000 this year, and $5,200,000 in all. With the exception of the Calumet and Hecla copper mines, Lake Superior, this is the largest amount paid by any American mine this year.

A Miner's Union has been organized at Granite. Montana, with 200 members. 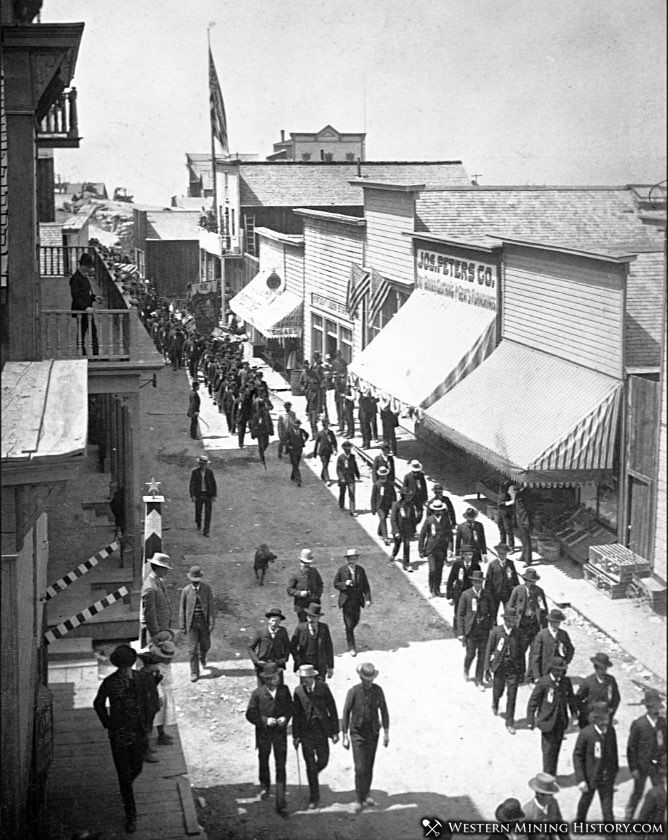 The mine is not so productive at present as formerly, as much water has to be contended with, and the lower levels are uncomfortably hot for the workmen. To assest better exploitation, and give better ventilation and thorough drainage a tunnel is being run to strike the No, 17 level, which is to be 4800 feet in length, of which 2000 feet is yet to be completed.

The stock of the company, owing to decreased production has been but $4 a share on the market for some time, but a late reported improvement in the mine has sent the shares up to $7.50. The Granite Mountain is controlled and mostly owned by St. Louis people.