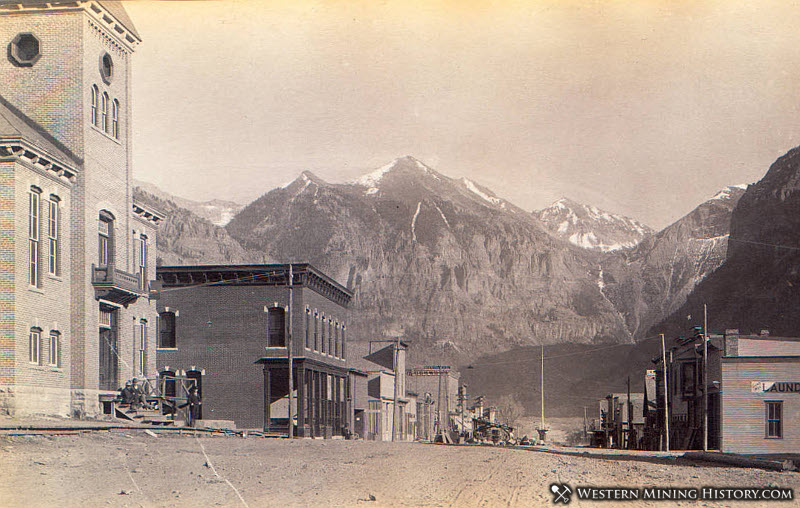 The town of Telluride, on the headwaters of the San Miguel River, is a quintessential western mining town. Probably named when a prospector mistook a rock sample for telluride ore (a type of rich, complex gold ore which was actually not what he had found,) the area experienced a gold rush starting in 1875 however its history reaches back much further.

This area was visited back in 1765 by Juan Rivera and a group of Spaniard explorers, with follow-up visits over the next 11 years. This all occurred during the period when the 13 original American colonies were yet to declare independence from Great Britain.

The Spaniards were most likely driven out by the Utes, on whose land they were trespassing, but there are no clear records on this. The Utes owned and governed this land until they were forced to sign a treaty with the U.S. government in 1873. 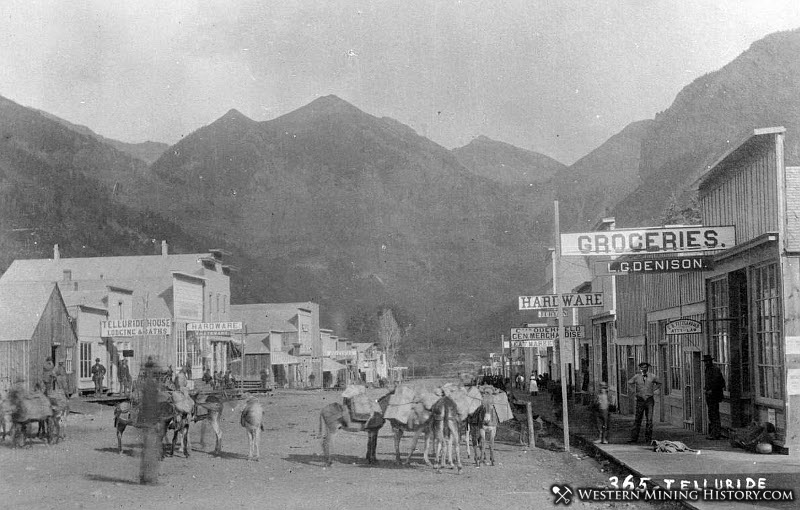 The primary motivation for the U.S. government was the same as for Juan Rivera: the minerals. The government was motivated by well-recorded prospecting done in 1872 by a few US placer miners. The early placer prospectors’ diaries suggest they were able to produce almost an ounce per day per person.

Not long after the treaty, groups of American prospectors started to arrive. On August 23, 1875, the Remine brothers and 8 other men located and filed the first placer claims in the area just west of where Telluride would later be built. 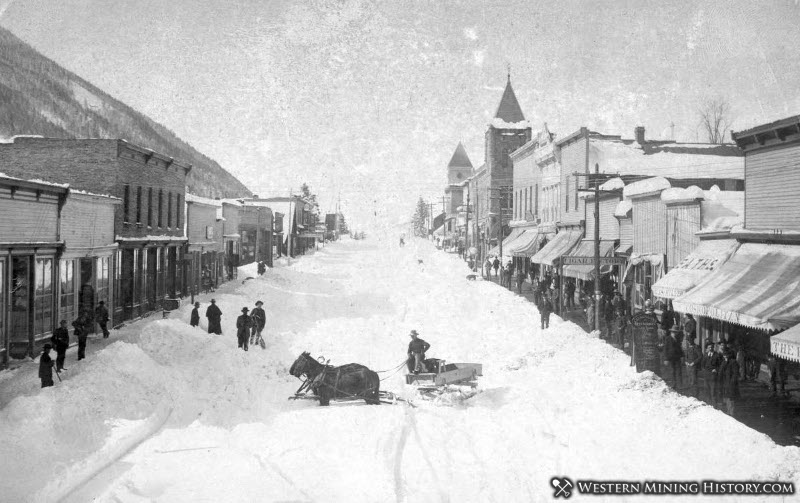 Telluride Colorado during the winter of 1895-96

The first lode claim was filed on October 7, 1875, by John Fallon. It had taken him an entire summer of prospecting to find that first hard rock claim. His tenacity in seeking out a lode source for the local placer gold led to the first real boom-times in Telluride. The hard rock miners who followed Fallon quickly established several mines including first the Boomerang Mine and then the Sheridan Mine up in Marshall Basin.

The city wasn’t formally incorporated until 1887 when there were already 2,000 people living there full-time. The railroad finally arrived in town in 1890, greatly accelerating growth of the town and the mining industry. 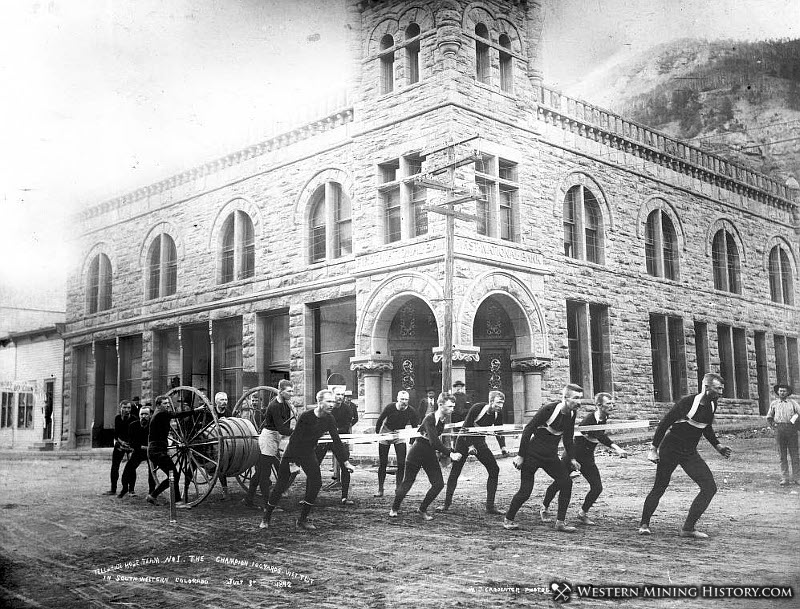 Telluride was known as a remote, hell-raising, boom town through the early 1890s. During that first boom, the mines focused on production of highly profitable silver but even in those early days, tourism was starting to develop due to the beauty of Telluride’s mountain setting.

Telluride went bust in the 1893 Silver Crisis and almost became a ghost town. Further exploration located additional gold and five years later a second boom was underway. By the end of the 1890’s there were 204 active mines, 18 mills and 1,300 miners in the immediate area. 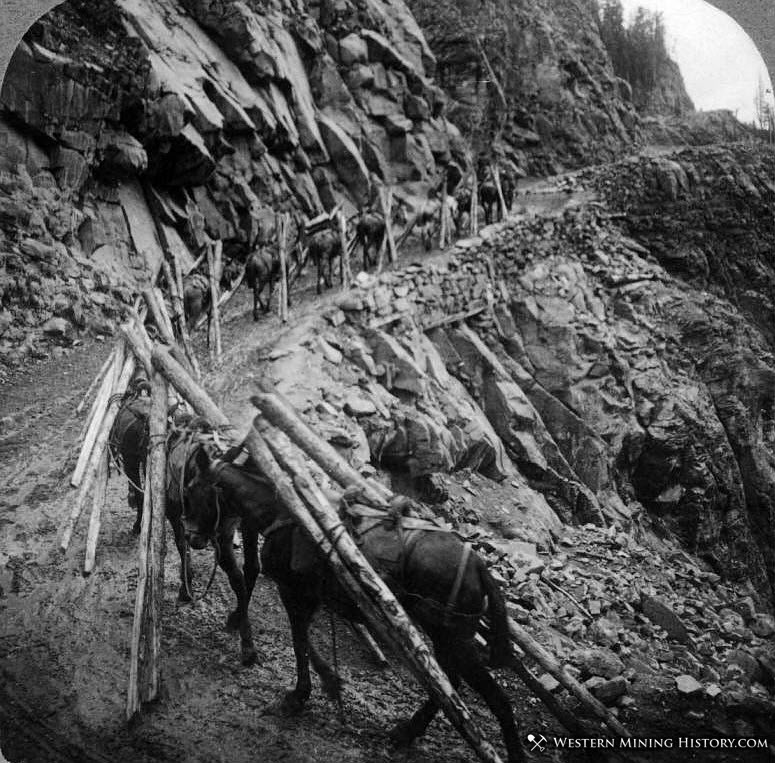 Trailing timbers from Telluride up to the Tomboy mine

World War I demand for lead and zinc added to the mining industry as gold production faded. However after WWI that second boom faded and the town did too. Another boom happened from the 1950s-1970s as more modern mining technology and better transportation made some of the old mines profitable again. This additional activity brought the total production to over three million ounces of gold in the 100-year history of the mining district. 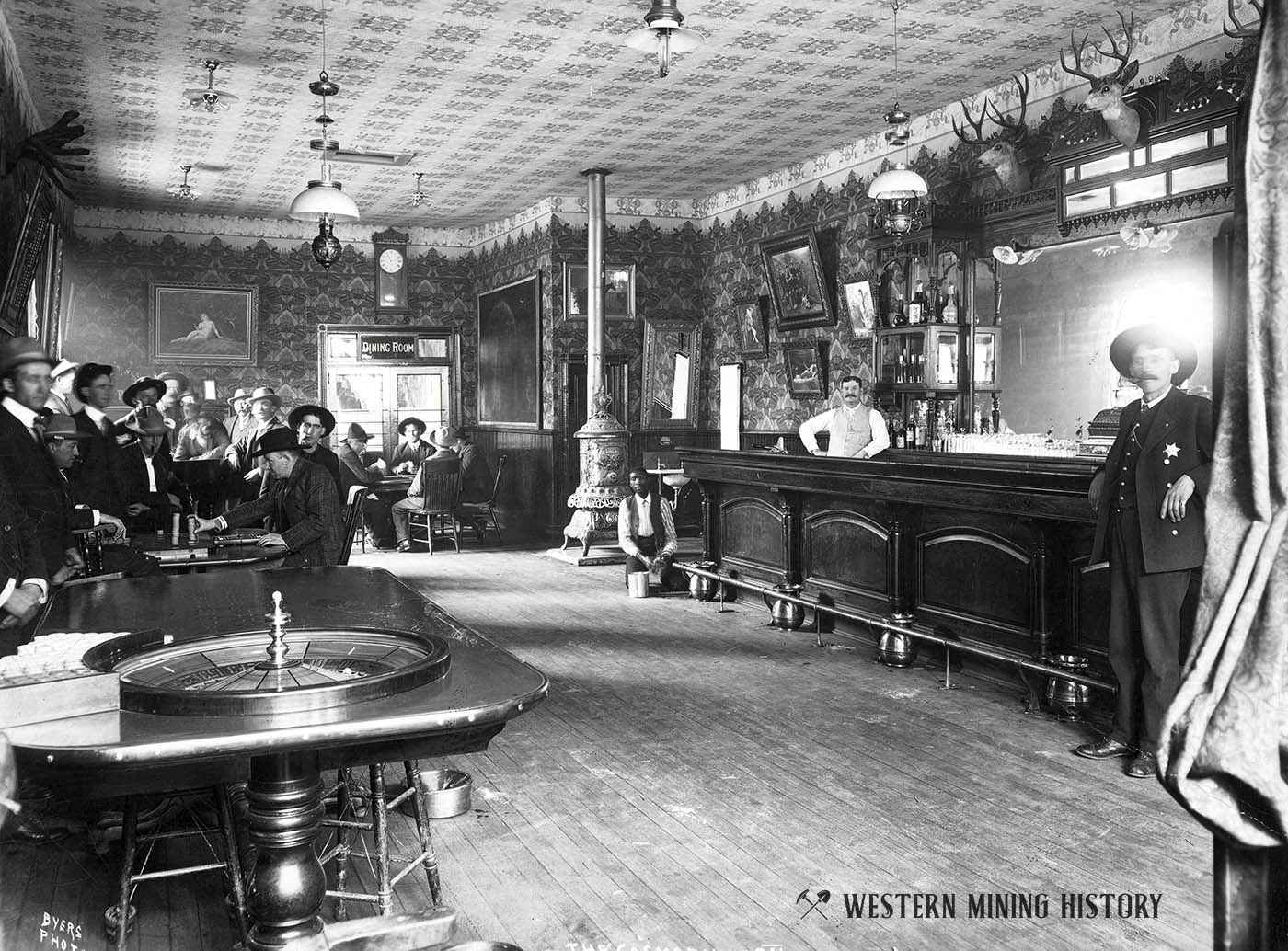 In the 1970’s as the last mining waned, Telluride redefined itself as a ski town. Despite the cycles of boom and bust, the town retains its original Victorian charm. Its status as a national historic district since 1961 has helped protect Telluride from awkward modernization with about 300 buildings remaining from the original boom times. The New Sheridan Hotel, built in 1895, still offers drinks in their well preserved, originally furnished, bar.

The Telluride Historical Museum tells the history of San Miguel County, including a geology exhibit, a mining exhibit, and other relevant details of local lore. The museum is housed in the restored downtown 1893 miners' hospital. 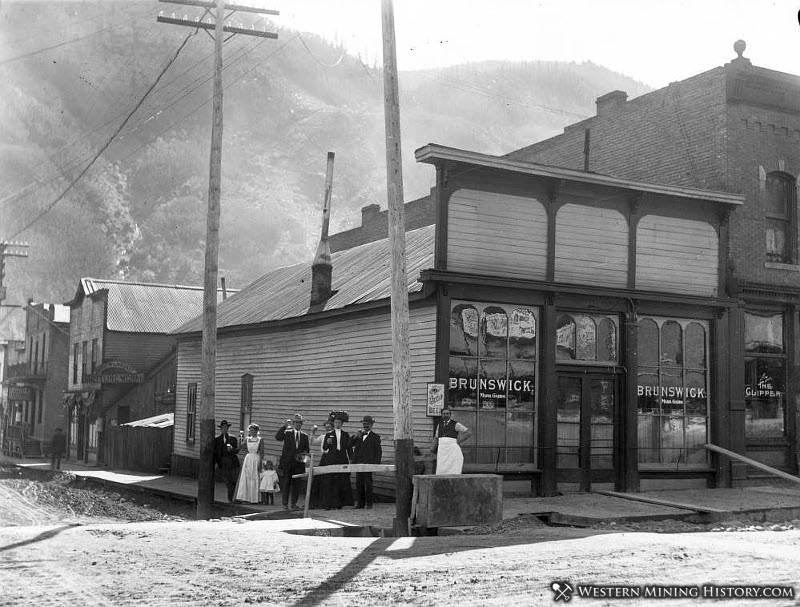 Historical highlights include the first long distance AC electric system in the world. This was installed to serve several mines in the area and to provide lights in town via an 8 mile transmission line, the first ever.

Butch Cassidy and his ‘wild bunch’ contributed another more questionable historical highlight when they chose Telluride to commit their very first bank robbery. They hit the San Miguel National Bank on June 24, 1889. The estimated $30,000 they stole was never recovered. 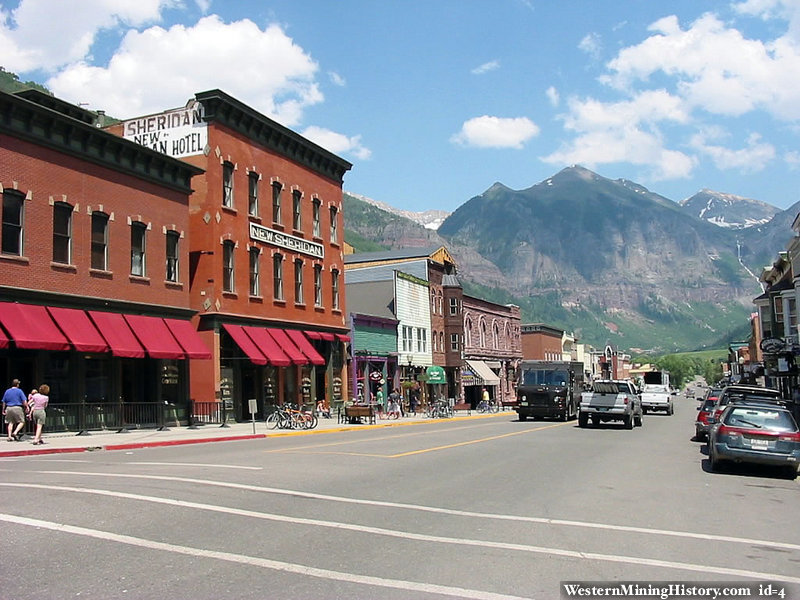 The historic Telluride Lone Tree Cemetery sits at the uphill edge of town. It includes many historic gravestones. The local museum leads guided tours of the cemetery on Friday evenings during the summer.

Historical newspapers are one of the best sources of information on what life was like in mining camps of the Old West. This post contains ads from The Daily Journal of Telluride, Colorado – April 18, 1896 edition.

This advertisement for the Sheridan Hotel announces new management under “Captain W.S. Walker”, touts modern conveniences like electric lights and steam heat, and offers “Special Family Rates” and “Bus to and from all trains”.

1896 Advertisement for the Sheridan Hotel in Telluride, Colorado 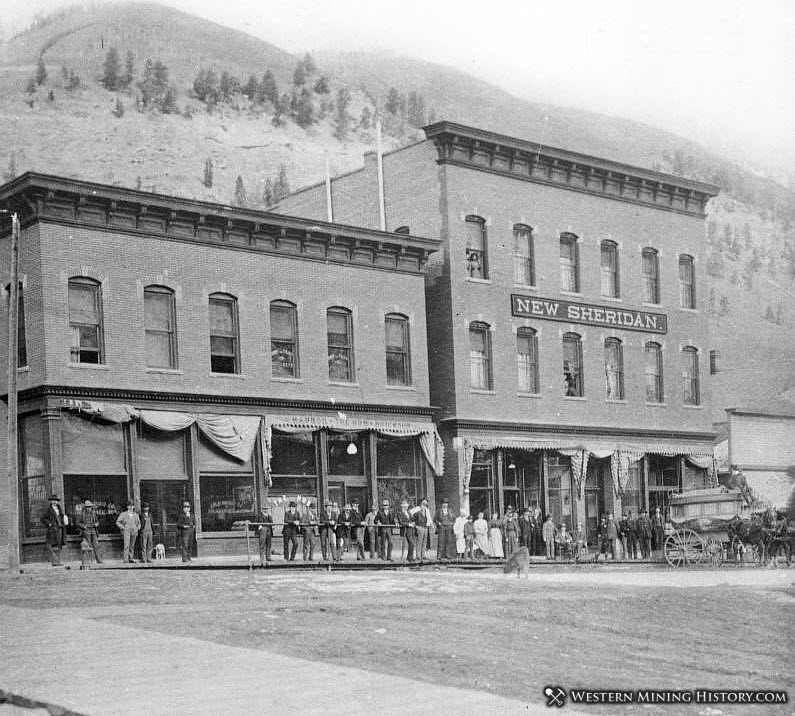 Restaurants of the day did plenty of advertising to attract hungry customers. This ad claims that the Metropole Restaurant is “The only first-class restaurant in the city” and offers luxuries such as oysters and fish at the rate of 35 cents for lunch and 50 cents for dinner. 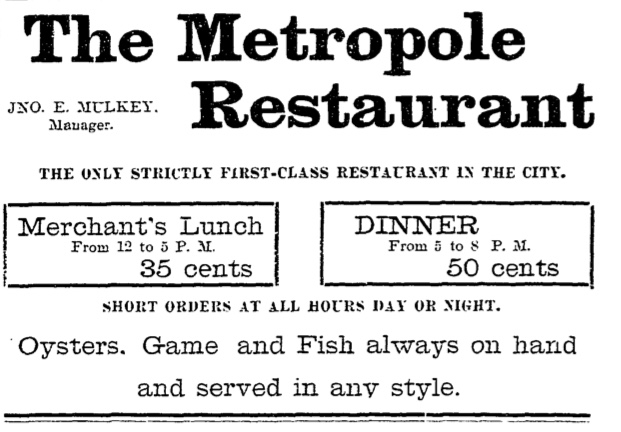 Optimistic mining brokers Painter & Rohwer of Telluride conclude that you are looking for an investment in mining. They claim that “The gold fields of San Miguel County are becoming extensively known, and are proving to be of greater value every week”. 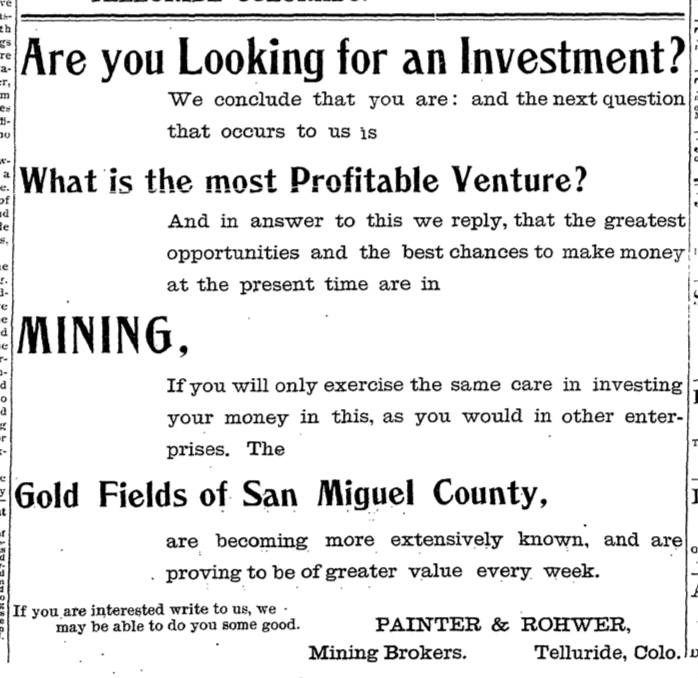 Distant companies advertised their goods in local mining camps like this ad for wool suits from the Oregon Woolen Mill Company. Who needs proper spelling when advertising “the best tailor-madd suits ever sold in Telluride” when you include a little humor: “No X rays needed to detect the suits made by The Oregon Woolen Mill Co.”. 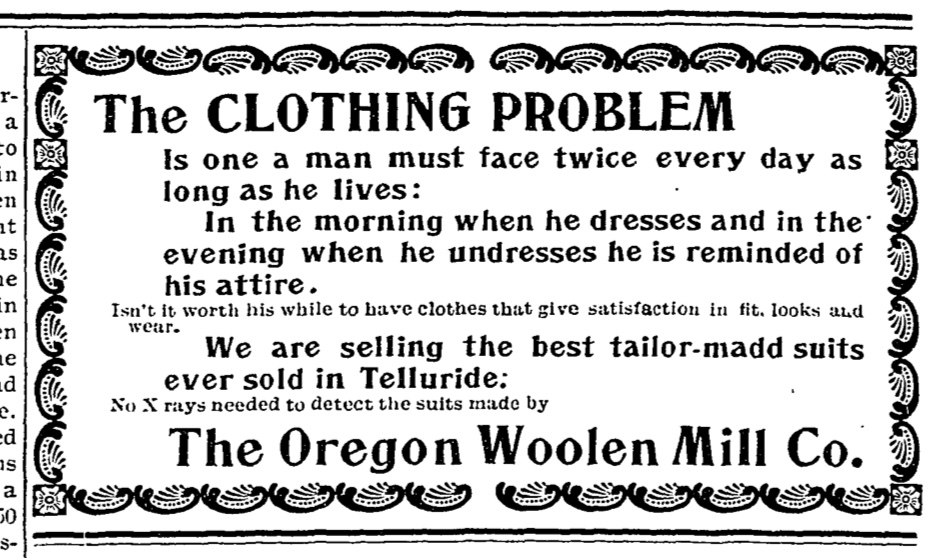 The city of Telluride served as the commercial and social hub of many important mines and districts. Those districts were the locations of smaller, yet still historically Significant mining towns, many of which can still be visited today.

The ghost town of Pandora, just east of Telluride, is so close to town that it feels like part of Telluride itself. Pandora was named for the Pandora Mine but the Smuggler-Union Mine turned out to be the real money maker. That giant mine built its floatation mill in Pandora and operated the mill into the 1970s.

The Tomboy Road is a challenging, narrow, unmaintained, sometimes harrowing road heading out of Telluride. It heads easterly four miles to the famous Smuggler-Union Mine site and the town of Smuggler which housed the hundreds of miners working at the mine. Some of the ruins have literally slid down the mountainside but an impressive crusher house as well as a couple of boilers sitting on a concrete foundation still mark the site. The gated entrance tunnel is also still visible. 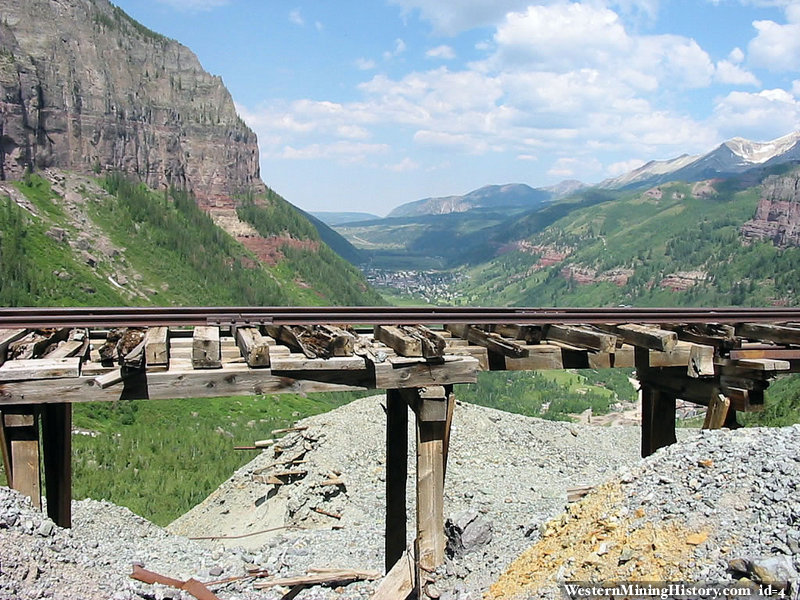 View of Telluride, Colorado from the mines above Pandora

Just east of the Smuggler-Union Mine is the ghost town of Tomboy, named after the famous Tomboy Mine. At its peak, the town of 900 people had a school, YMCA, tennis courts, stores and stables. It was served by stage coach from Telluride daily. A few buildings remain standing and there are ruins of many more crushed by the heavy snows or disassembled for partial reuse by locals over the years.

The Alta ghost town is about 6 miles south of Telluride. Gold was discovered here in 1878 so there are some older relics around. Sadly the Alta mill burned in 1948 but a boarding house and several other dwellings remain including a striking three story miner’s dormitory.

The ghost town of Ophir is about 8 miles south of Telluride. The little, mostly occupied, mining camp is at the base of the road up to Ophir Pass. The town was started in 1875 when the first claims were staked out. By 1898, the little town was home to about 400 people with electric lighting. Surviving early structures include the stamp mill, a hotel, a number of cabins (many still occupied) and, above town, the Ophir Loop. The loop is a dramatic feat of engineering - a 100 foot trestle bridge and 3 tiers of overlapping track, designed by Otto Mears.