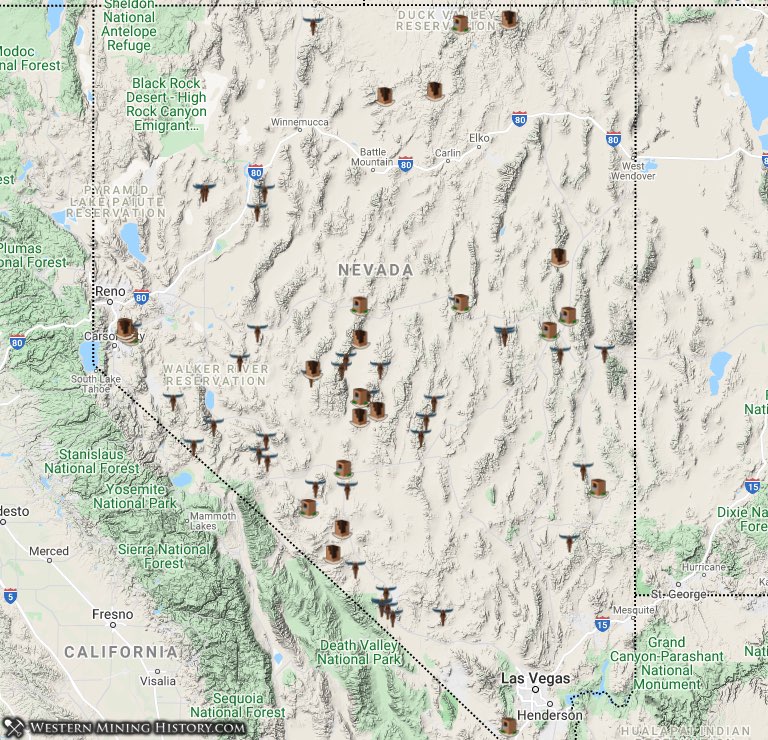 Unlike other states, Nevada doesn't have a distinct set of mining regions - mining districts, both minor and major, cover almost every part of the state. The following description describes some of the most notable mining towns throughout the state.

Starting in 1849, thousands of prospectors traveled through Nevada on their way to the newly discovered gold fields in California. Most were either in a hurry to get to California, or simply were trying to survive after months on the trail. Therefore, the mineral riches of the state were largely ignored during this period.

Some of the prospectors did discover gold on their journey however, and some of decided to forego California and work the placer deposits where they found them in what was then the newly established Utah Territory. A loosely organized mining community was established around what became the town of Dayton. For a fascinating account of this community, check out the article The Gold Canon Placer Mining Colony.

The miners of the Gold Canon community toiled for almost a decade before realizing that much of the time they were prospecting for gold on what was a literal mountain of silver. Their 1859 discovery of what would become the Comstock Lode would be the most significant historic event in the West since the beginning of the California Gold Rush over a decade earlier.

The 1859 discovery of silver ore, known as the Comstock Lode, resulted in the establishment of Virginia City, one of the West's greatest mining cities, and second place in our list of Top Ten Historic Mining Towns You Should Visit Today. Also established in the Comstock district were the important cities of Gold Hill and Silver City.

In 1862 rich silver ore was discovered at Austin. Austin is located in what was the isolated central part of the state, and served as a staging post to push deeper into unknown territory in search of precious metals.

The late 1860s brought a new silver rush to the White Pine region. The two primary towns of the district were Hamilton and Treasure City.

In the first couple years of the White Pine rush, well over ten thousand people arrived at the district to prospect and work the rich silver mines. The mines played out fairly quickly though and most of White Pine was abandoned by the mid-1870s. Hamilton, the first county seat, limped along until the 1880s but ultimately burned and became a ghost town.

The 1900 discovery of silver at Tonopah established another important silver mining center in Nevada. The mines were rich producers for decades, and the town of Tonopah is still active today.

As mentioned above, Nevada started out as a gold state with the placer mining settlements of Gold Canon. However, the discovery of the Comstock and other important silver deposits gave the state the nickname "The Silver State".

Despite the reputation for silver, new gold mining towns were established continually throughout Nevada from the 1860s through the 1920s. Many of the early camps were extremely isolated, and were overshadowed by the great riches coming from the silver districts. The richest silver mines produced more gold as a secondary commodity than many of the state's obscure gold districts.

An early gold town that rose to prominence was Delamar. Delamar was settled in the early 1890s, and by 1897, during a time when Nevada mining was experiencing a depression, it became one of the state's most valuable mining centers.

Just after 1900 a string of important discoveries shifted the Nevada mining scene toward gold. Towns like Rawhide, Rhyolite, and Goldfield were important boom towns during this decade.

Many of the booms that occurred during this decade were based on speculation or on ore bodies that soon pinched out, and most of them fizzled out in less than a decade. Goldfield became the biggest boom and bust story in the West as it quickly became the largest city in Nevada and then suffered a dramatic series of events that left it virtually abandoned by the 1920s

In an ironic twist, the modern era of mining in Nevada, based on huge open-pit operations mining low-grade ore, have made Nevada the number one gold producer in the nation. The state is no longer the leading silver producer, so when you hear Nevada being called the silver state, just know that it is actually the "Gold State".

The information on this page only highlights some of the most famous silver and gold mining towns in Nevada. Others, like Eureka, a lead district known as the "Pittsburgh of the West", or Ely, a major copper producer, are two additional examples of towns full of amazing history.

Many more historic Nevada mining towns can be explored through the links above, or on our map of western mining towns.